There is something so right about two distinct Audi institutions being so well amalgamated.

The TT has become Audi’s contemporary trademark, so to fit it with an engine so easily relatable to its historic rally successes seems to give the whole notion of an RS-badged TT that bit more substance. The fitting of a 2.5-litre five-cylinder engine into the TT is not a new thing but this revised TT RS now runs the lighter version of the R5 engine. The main difference between the old and new engines is Audi’s adoption of an aluminium crankcase, itself the main contributor to a total engine weight reduction of 26kg. Alongside impressive figures of 294kW and 480Nm, the real talent of this engine is its spread of torque, imbuing the small coupe with a broad and muscular feel throughout the rev range. In order to keep this engine in check with the latest emissions regulations, Audi has had to go to some length, installing particulate filters into the exhaust system.

Audi exclusively pairs the engine to a seven-speed S-tronic dual-clutch gearbox, a fine partner in crime and, as typical for hot Audis, it is all-wheel drive. The TT RS, like other all-wheel-drive cars on VW’s MQB platform, employs a Haldex system that uses a clutch pack to engage the rear axle whenever the car decides it needs torque at both axles, but never sends any more than 50 per cent to the rear. 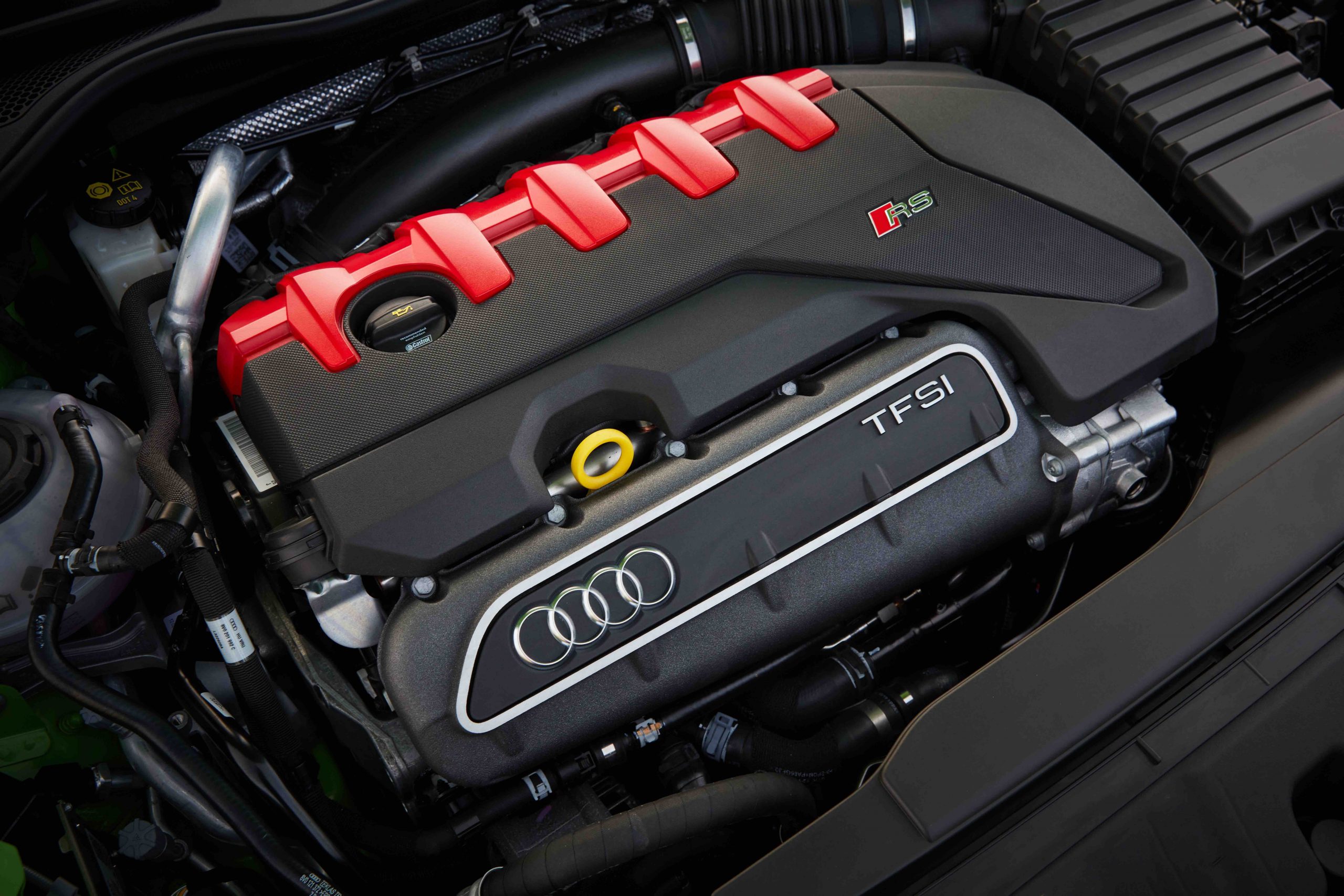 Traction off the line is deeply impressive. To activate the launch control you need to be in Dynamic mode, with the transmission and ESC both in Sport. Then it’s simply a case of holding the RS on the brakes with your left foot and pushing the throttle all the way through the kickdown to the end of its travel. Then, with the revs steady at about 3500rpm, you just release the brakes.

The claimed time for the sprint to 100km/h is 3.7 seconds, but we’ve recorded a 0-100km/h time of 3.4sec. That’s quicker than the 3.5sec evo once recorded in a Ferrari Enzo, and as near as dammit McLaren F1 quick. Madness. The first time that you floor the accelerator with the sports exhaust cracked wide open it’s hard not to fall for the TT RS. A loud, complex soundtrack fills the cabin, the note changing from deep warble to something harder-edged but still slightly askew as the revs home in on 7000rpm. The five-cylinder produces as distinctive a war cry as any engine and Audi plays it to perfection.

That first surge of acceleration will also leave you in no doubt as to how stunningly fast the little coupe is. The power feels totally contained, however, with the quattro system deploying every ounce of the 294kW. It’s bursting with energy, and it’s all being put to good use, with no sense of slip between rubber and road.

On the exit of bends the TT simply grips and goes. Yes, you can feel the TT driving more from the rear with the Haldex system set to its new Dynamic mode, but the rear simply hunkers down and drives you forward rather than allowing you to really adjust the arc of the back of the car on the throttle.

Turn-in is very encouraging, with the front end feeling more responsive than on any TT that we can remember – something that is undoubtedly helped by the RS’s brake-based torque vectoring. Though carbon-ceramics are an options, the standard steel rotors (with eight-piston front calipers) are hugely confidence inspiring.

If there were to be a template for how sports car interiors should all look in the future, this would probably be it. The RS builds on the already excellent TT, itself a beacon of minimalist design and exceptional build quality. Despite the pared-back nature of the new TT RS’s interior, it’s chock-full of brilliant detailing and little features that make you realise that Audi’s designers really thought about the cabin in a different way to most other manufacturers. The first thing that strikes you is the three propeller-inspired air vents, then look closer and you realise that they also feature the controllers for the entire HVAC system, having twist knobs that also function as temperature and fan displays. The steering wheel is taken from the Audi R8 supercar, but with the shrunken steering wheel boss and red starter button it looks like it could have come straight off a concept car. The other new button controls the ‘drive select’ function, allowing the driver to alter the behaviour of the car via the 12.3-inch Virtual Cockpit.

If you want to experience the TT RS’ fabulous Group B war cry, it’s in showrooms now starting at $134,900.