The Cupra Ateca was the first model to launch SEAT’s performance offshoot as a standalone brand. Its start in life was strong in Europe and it will become part of the local Australian line-up when the Spanish brand launches here in 2022.

Given Cupra’s head start in Europe, the model has been updated since its launch and the facelifted version will be the one to come Down Under and it benefits from a range of mostly cosmetic upgrades. However, designers have taken a fairly low-key approach to the exterior refresh. The angular shape is carried over with only a few minor detail changes; the LED headlights get new internal graphics that give the car’s face a slightly sharper look, while the front grille elements and bumper designs are also subtly fresh. All Cupra Atecas ride on 19-inch alloy wheels, and adaptive dampers are fitted as standard. Cupra has reworked the steering in order to improve the response from the rack, although otherwise the mechanical set-up is largely the same as before. This includes the powertrain; a 2.0-litre petrol turbo sends its drive to all four wheels via a seven-speed dual-clutch gearbox.

A maximum of 221kW is delivered from 5300rpm up to the 6500rpm red line… or the copper line, in this case. The rev counter, displayed on a 10-inch digital screen that can be customised to show a variety of driving and media functions, is only one of many details within the cabin that now carries Cupra’s signature colour. 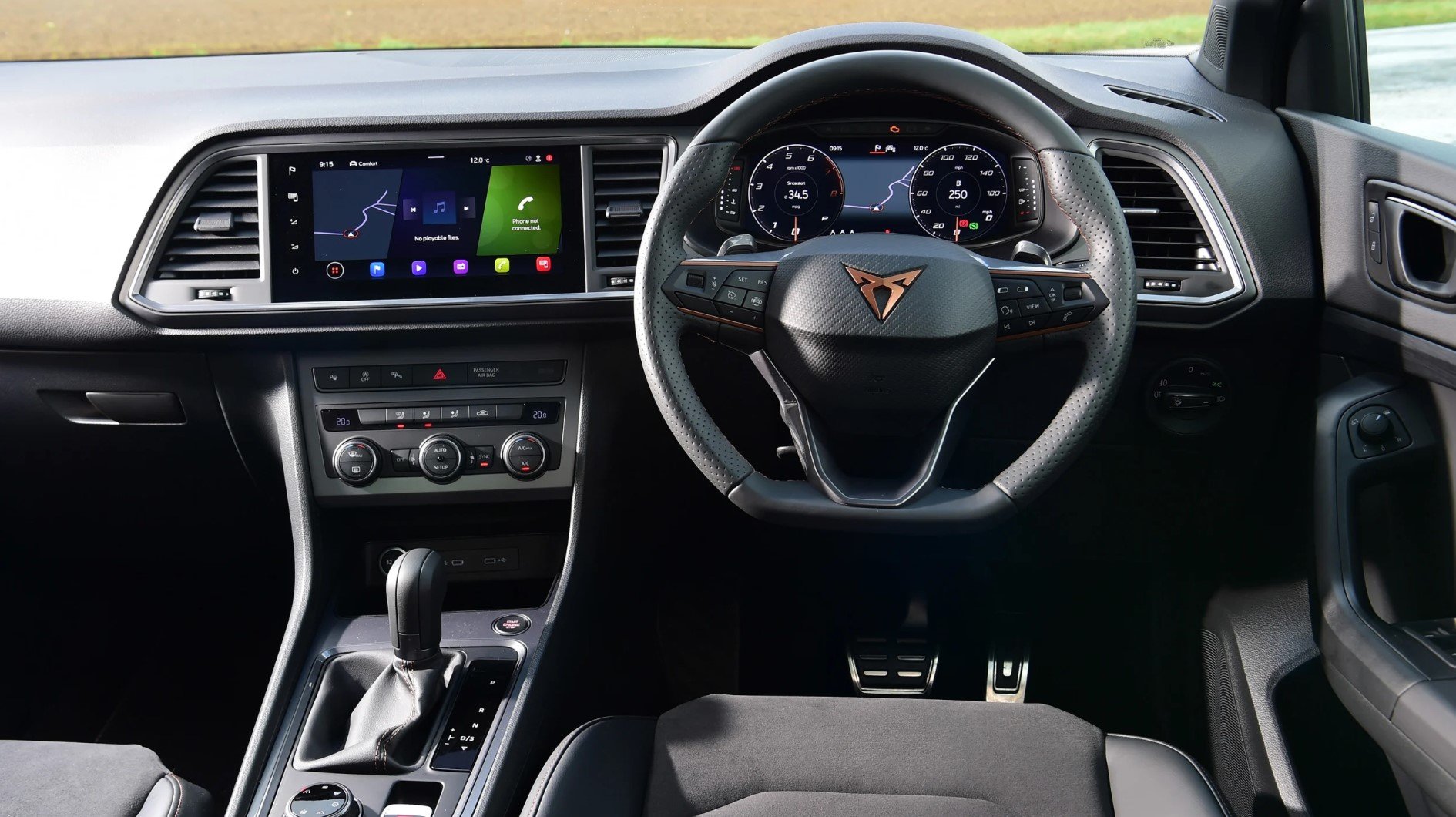 Stitching on the seats, dash and gear-selector gaiter, as well as on a new steering-wheel design, also feature the copper finish, which helps to highlight an otherwise black and moody cabin. The body-hugging sports seats wear a mix of leather and Alcantara, and feel supportive. Quality is decent enough, but the black door handles look rather cheap.

The rest of the cabin nails the family-car brief; there’s loads of room in the back, and cubby spaces are plentiful. Although 485 litres doesn’t sound like a vast amount of boot space, the square area and huge opening make loading easy.

Once out on the road, however, it almost feels like the chassis engineers have forgotten that some semblance of comfort is also welcome in a family car. Within a few hundred yards, it becomes clear that the ride is on the less forgiving side of the current crop of hot hatchbacks. The Ateca always seems busy, and it can crash into abrupt road-surface changes. The adaptive dampers do little to alter this feeling; the ride is at its harshest in full-blown Cupra mode, but the improvements are only marginal when you tone things down to Comfort. The flip side of this is that the Ateca is a lot of fun to throw around. Perversely, it’s at its most playful in Comfort setting. By introducing a little extra body roll, the weight transfer allows you to play with a chassis whose balance can be adjusted with both the steering and the throttle.

The updated steering doesn’t introduce a huge difference in feel, but it is precise and pleasingly weighted.What hasn’t changed is the Cupra’s ability to cover ground at a seriously rapid rate, whatever the weather. Overall grip levels are high, and the four-wheel-drive system means that even in damp conditions it’s possible to make the most of the 2.0-litre turbo’s full 400Nm. In Sport and Cupra modes, the exhaust system introduces a few pops and bangs to add a little drama to go with the sub-five-second 0-100km/h time.

While the mid-life changes to the Cupra Ateca are all subtle, they help to freshen up this rapid family SUV. However, with Cupra’s own Formentor also an option, the case for the hot Ateca has become much harder to justify. Unlike the SEAT-derived Ateca, the Formentor is unique to the Cupra range, plus it’s more distinctive to look at, and more sophisticated to drive.