The Dacia Duster SUV has been updated for 2021 and could be heading to Australia. John McIlroy snags an early drive to see what it is like.

Dacia is forging ahead with a major new-model push and it might have just come at the best time. See, the Renault-owned Romanian car builder produces cheap and cheerful cars, and plans are underway to bring the brand to Australia by 2023.

We’ve been impressed by the latest Sandero, and the forthcoming Jogger seven-seater looks extremely promising. In the meantime, the brand has given its existing SUV, the Duster, a few timely updates to try to keep it fresh before an all-new version arrives, probably in 2023.

This is Dacia we’re talking about here, though, so don’t expect a radical overhaul. The line-up of engines remains broadly unchanged, with a 66kW 1.0-litre three-cylinder turbocharged petrol as the starting point, and a 1.3-litre four-cylinder 95kW motor for those who want a bit more shove. Both options are front-wheel drive and come with a six-speed manual gearbox.

The range-topping petrol that we’re driving here is a 110kW version of the same 1.3. It’s front-wheel drive only again, but it doesn’t get a manual option; it comes with a new six-speed dual-clutch automatic.

Dacia will still sell you a diesel Duster – an 84kW 1.5-litre unit – with a six-speed manual and the choice of front- or four-wheel drive, and the firm continues to offer the LPG-compatible Bi-Fuel powertrain that brings a combined range, between petrol and gas, of more than 1223km. That’s impressive, but we don’t expect the gas version to come here.

From the outside, the upgrades on this facelifted model are modest. There’s a new radiator grille, a fresh design of alloy wheels, a couple of new finishes in key areas and different headlights, incorporating new Y-shaped LED daytime running lights to help tie this older model in with the latest Sandero’s design language. Inside, the Duster gets fresher-looking fabrics, slimmer headrests and a new centre console, incorporating USB connectivity on some models, plus a 1.1-litre storage bin and an armrest. 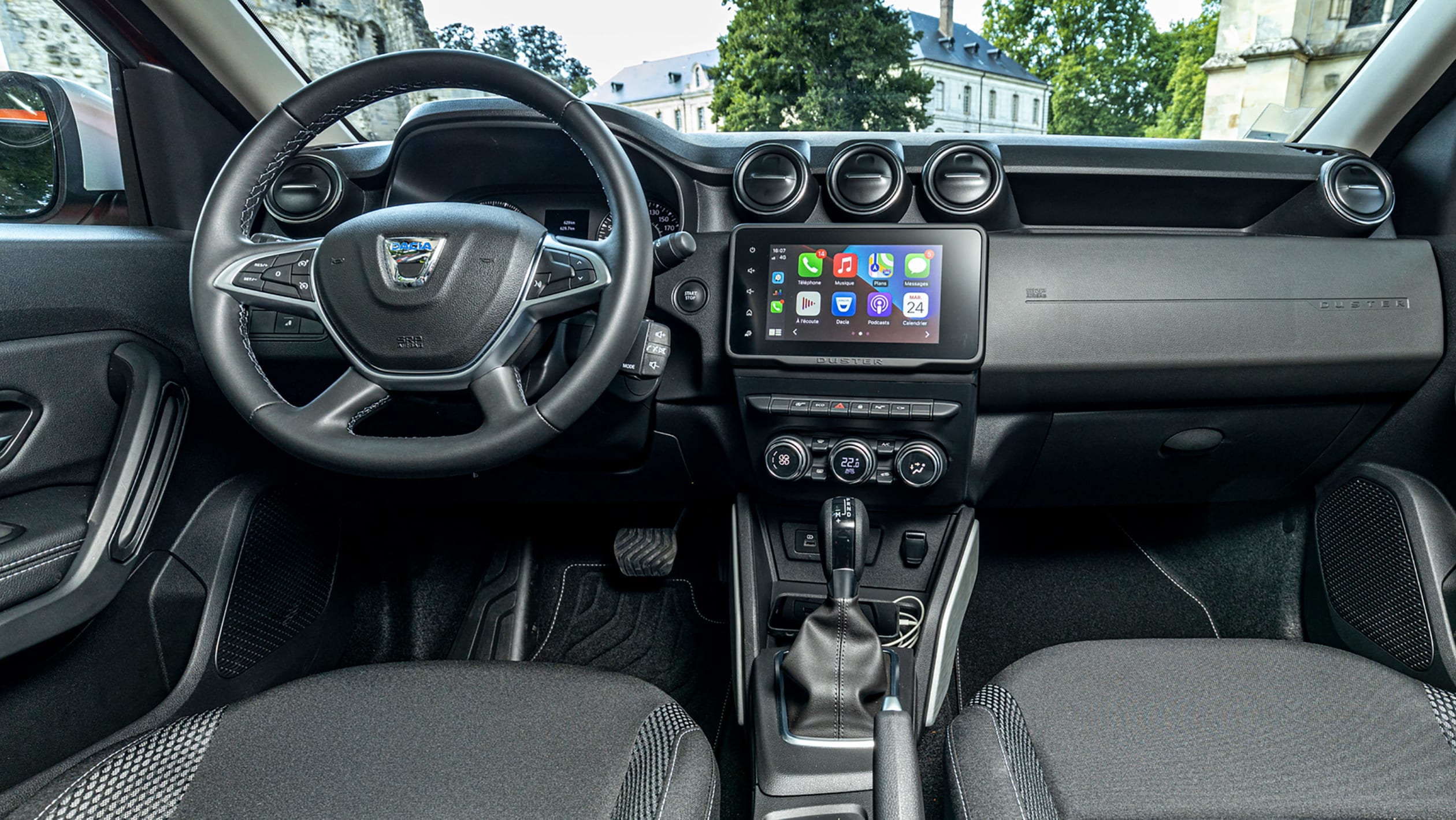 The range of trim levels continues to be simplicity itself. Entry-level Essential versions come on 16-inch steel wheels and get automatic headlights, LED daytime running lights, reach and rake adjustment on the steering column, a DAB radio and air-conditioning. Interestingly, this edition is being offered with only a choice of the 66kW petrol or the bi-fuel, which has the same engine but is rated at 74kW because its output is higher when you flick the LPG switch. They’re priced identically, too, at just £13,995 which is around $26,500 in local currency.

Spend an extra $2800 and you can have Comfort, the likely best-seller, which includes 16-inch alloys, front fog lights, heating and electrical adjustment on the side mirrors, electric rear windows, a leather steering wheel and upgraded upholstery. It also brings Dacia’s latest eight-inch infotainment system, with a pair of USB sockets and hook-ups for both Android and Apple phones, plus a rear-view camera and rear parking sensors. The new combination of engine and gearbox certainly adds a fresh dimension to the range, although the Duster isn’t about to embarrass more expensive machinery on performance. The 1.3 motor has decent punch low down, and while you can rev it to 4000rpm and beyond, there’s really no need to. Dacia claims a 0-100km/h time of just under 10 seconds and that’s a fair reflection of the performance overall: it’s acceptable, without ever feeling brisk. The engine is smooth when revved, though, and at a steady 110km/h cruise it’ll be sitting at around 1200rpm, a refined companion.

The new gearbox will be on your side by that point too, but it’s not without its foibles. The shifts are generally smooth enough, but the software controlling them can be guilty of clumsy decisions on kickdowns and holding gears when it would be much better served by a higher ratio. In this respect, the Duster auto isn’t quite a full rival for the dual-clutch VW Group products, and it’s some way off what Peugeot and Citroen have achieved with a conventional eight-speed auto. Beyond a tweak to the steering calibration, Dacia’s engineers haven’t really mucked around with the Duster’s set-up. That brings pros and cons; it is pretty much solely focused on comfort, and in general it delivers that. Our Prestige-spec 17-inch alloys probably didn’t help much here – we suspect a Comfort on 16s would be that little bit more compliant – but the Duster does a good job of soaking up bigger bumps, only really coming unsettled over long stretches of broken tarmac.

It does tend to want a second stab at most situations, though – a second head toss over bigger bumps, a second small bounce before settling its body into a faster corner, even a supplementary steering input in twistier sections (the increased response at higher speeds doesn’t really bring much of a gain in accuracy, we’d say).

You soon get used to these traits – indeed, if you’re already a committed Duster owner you’d probably find them reassuringly familiar. But the older underpinnings (this car’s platform can be traced back to 2004) are betrayed by less appealing behaviour that’s increasingly rare in modern cars: the amount of transference of vibration to the cabin, through the steering wheel and pedals.

There’s a fair amount of wind noise from around the A-pillars, too, presumably because the revisions didn’t extend to reworking sheet metal. In these respects, the Duster does now feel a proper generation behind the latest Sandero and particularly the Stepway. A facelift can only do so much. The cabin, meanwhile, remains brutally stark in design but features hard-wearing plastics and proven switchgear that is likely to be as durable as it is dull to look at. The new Sandero-sourced eight-inch infotainment system is still mounted lower down in the fascia than we’d like, but it has a crisp display and is pretty snappy to respond to your inputs.

Even the built-in navigation on the Prestige model isn’t a bad effort – though we, like the majority of Dacia customers, would probably save our cash, opt for the cheaper Comfort trim level and use the Apple or Android integration instead.

There’s certainly space on board for a small family, and four six-footers could travel a fair distance without grumbles from those in the rear seats (they’ll probably moan about kneeroom first). And while the boot does without clever features, like a variable-height floor or retractable baggage hooks, get over the hefty load lip and there’s 445 litres of capacity on offer. That’s more than 60 litres up on what you’d find in a VW Golf – a reflection of the Duster’s razor-sharp positioning as heavily abused, carry-all transport with space and value at its heart.

Speaking of which, it’s important to put this range-topping Duster Prestige’s price into context. It comes in at a smidgen over the equivalent of $37,000 overall. The Duster remains true to its ethos, offering decent practicality and all the equipment you really need at a frankly astonishing price. There’s no escaping the age of some of its underpinnings, though, so while Dacia devotees may be comfortable enough with this new range-topping auto version, everyone else will find better value (and, most likely, a more favourable star rating) further down the range.