Hyundai’s Tucson Highlander is the most premium model in the line-up, and it wants to bite at the ankles of the luxury segment.

Let’s cut straight to the chase – the previous Tucson model was a car that primarily sold itself on practicality, modest pricing and family usability, while decent levels of kit went some way towards making up for its distinct lack of flair.

Hyundai’s fourth-generation mid-size SUV is a slightly different proposition, keen to establish itself as a premium offering for families that value style and refinement, as well as the more prosaic qualities of overall load space and day-to-day functionality. Competition is fierce in this market sector and many of the Tucson’s rivals have established USPs that help them stand out from the pack. The Volkswagen Tiguan has an unmistakable air of quality and a solid reputation, the Toyota Rav4 is one of the best hybrids in the business and the Mazda CX-5 brings polish on top of a powerful 2.5-litre turbo engine.

Also worth a mention in the myriad choices are the Honda CR-V, Nissan X-Trail, Kia Sportage, Peugeot 3008 and Mitsubishi Outlander.

That’s all just for starters, be in no doubt that Hyundai has a clear focus for not only taking on the best of the mainstream, but also nipping at the heels of the more upmarket brands like Audi and BMW. Pricing for this Highlander 1.6-litre turbo starts at $50,000 before on-roads and it is the most powerful Tucson in the range, as well as the most expensive and well-equipped.

The engine itself develops 132kW at 5500rpm and 265Nm from 1500-4500rpm. While the performance on offer isn’t groundbreaking (0-100km/h in around 9.0sec) the car’s a competent cruiser on faster roads and there’s a reasonable surge of acceleration when you press on the throttle hard enough. The Korean brand performs local development on nearly all of its models for ride and handling, providing a tailored setup for Australian roads – that’s not the case here, with this model adopting the tune that comes from a development team based at the Nurburgring circuit in Germany, with countless hours of driving on European roads, and the famously tortuous Nordschleife track. It has clearly done the Tucson no harm at all. Unlike most SUVs, there’s feel in the steering as well as accuracy, and the Tucson feels keen to turn, with very little body lean. It may not be quite as involved as the VW Tiguan to steer but it’s more agile than the Toyota RAV4.

The Highlander’s wide Nexen Roadian GTX 235mm rubber around the 19-inch alloys provide good grip for most quick corners, but there’s is just a slight jostle of harshness on sharp ridges across the surface. For the most part however, expect a compliant ride that’s suited to plotting about the suburbs yet agile enough for those that enjoy a quicker pace. Slide into the driver’s seat and, apart from the accommodating height of the car and Hyundai badge on the steering wheel, there’s little to tell you this is a Tucson. A complete redesign has replaced a somewhat bulbous fascia with a sweeping, vertical dashboard that’s very Audi-esque.

The most striking feature is the absence of any plastic cowling for the instruments. This has a surprisingly transformative effect, opening up the front of the car and making it at once feel airy and modern. The quality of materials is also striking, with finishes very close to more upmarket rivals like the Audi Q3. 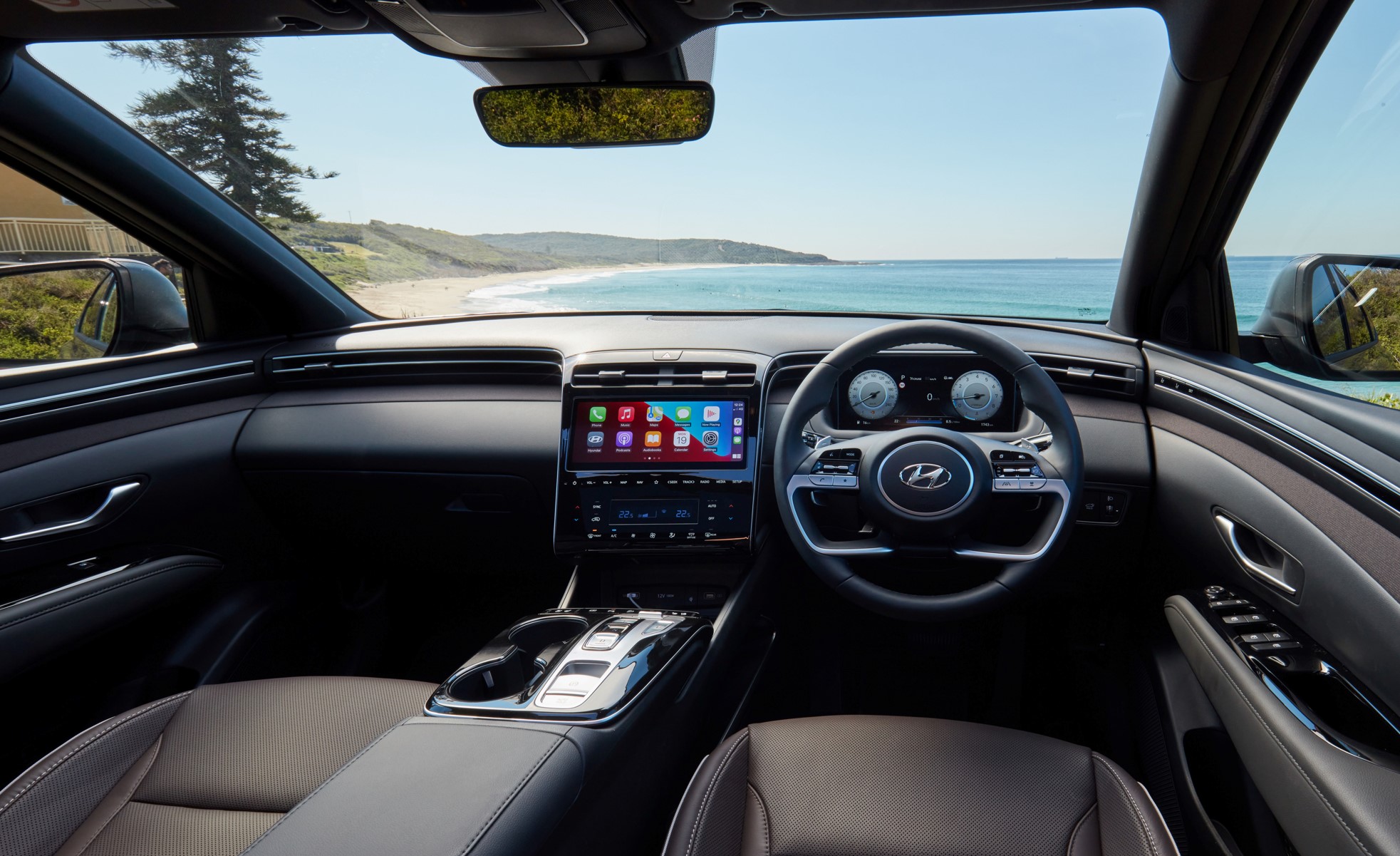 The riot of sharp lines found on the Tucson’s exterior also continues inside. Thin slivers of chrome trim arch upwards from the centre console, crest the dash and continue neatly along the top of the doors. Not only does this add a hint of sophistication, there’s a touch of the nautical to it as well. A strip of fabric across the top of the fascia also helps inject some personality.

A flat, tablet-style 10.25-inch display perches behind the new four-spoke steering wheel, while a sharp, high-resolution touchscreen measuring the same size sits below the central air vents, instead of sitting above them like before. Apple CarPlay and Android Auto are standard, as is a Bose sound system. Traditional centre console buttons have been replaced with illuminated touch-sensitive items. These are flush with the surface of the console, which makes them slightly difficult to differentiate when driving, meaning you occasionally have to take your eyes off the road to find the right one. The Tucson features new underpinnings, and while it doesn’t look much bigger than before, it has actually grown slightly in every direction. It now sits 20mm longer, 15mm wider and 5mm taller, while the space between the front and rear wheels has grown by 10mm. The last figure is particularly important, because while fitting bigger bumpers can make a car longer, its wheelbase usually dictates how much space is available for passengers.

Hyundai says there’s 26mm more rear legroom in the latest Tucson. The folding back seats have also made the switch to a 40:20:40 layout, which is another familiar trait of more expensive SUVs. This has the practical benefit of allowing two adults to sit either side of long items like skis or fishing rods, with the centre seat tipped forwards. The 539L boot is a rectangular shape, with a slight loading lip making it easy enough to load larger items. Hyundai has decided that now is the right time to move the Tucson into serious premium territory. Is it a good call by the Korean manufacturer? Well, with a much improved interior, striking looks and plenty of useful on-board tech, it’s clear that the Tucson means business.

Yes, you’ll find the Tucson a little more expensive to buy, but we think it offers sufficient quality to justify its positioning.