The new Maserati Quattroporte Trofeo is the fastest standard production car the famous Italian brand has ever produced.

Maserati has been in the business of making fast, desirable sports cars for some 106 years now, and the new Quattroporte Trofeo you see here is “the fastest standard production Maserati road car ever.” So, it has a fair bit to live up to.

On paper, at least, it doesn’t disappoint. At the heart of the car and sitting well back within the appropriately enormous engine bay sits a 3.8-litre, twin-turbo V8 petrol engine that produces 427kW at 6,750rpm alongside a rousing 730Nm of torque, available all the way from 2,250-5,250rpm. 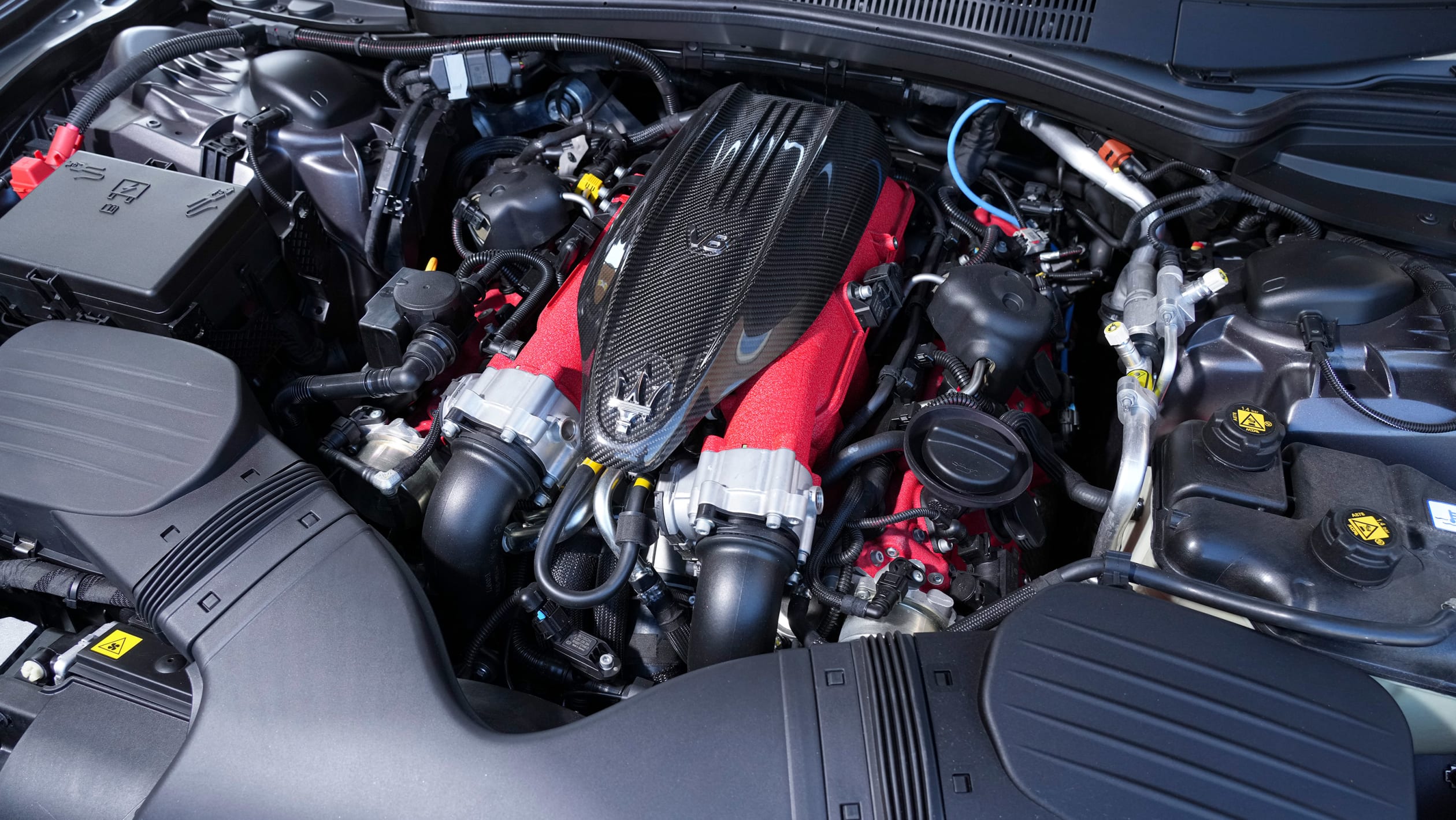 Mated to the ubiquitous ZF eight-speed automatic – the same gearbox you’ll find in anything from a BMW 3 Series to a Range Rover (and most of Maseratis other cars as well) – this is sufficient firepower to accelerate the two-tonne, rear-wheel drive Quattroporte to 100kmh in 4.5 seconds, and to 160kmh in less than 10 seconds.

But the real eye-opener is the top speed, which is quoted at 325kmh. By any standards, that is not exactly hanging about, even if it is a largely irrelevant number in 2021 if we’re being even remotely realistic.

Either way, this new sportier Trofeo version of Maserati’s big four-door saloon (which is what Quattroporte stands for in Italian) is quick enough, says Maserati, to rival anything on offer from Germany at a similar price. Just so long as you don’t mention the BMW M8 Competition Gran Coupe, that is, which has 459kW, can hit 100kmh in almost a second less due to it being four-wheel drive, and also has four doors, tons of space inside plus an almighty big boot.

No matter, because the rear-driven Quattroporte Trofeo is far more about style than it is mere function. In the flesh it oozes sophistication from its every pore, both visually and metaphorically. It’s the kind of car you need to be seen climbing out of the back of when being dropped off in Casino Square in Monaco. It’s an occasion-led car if ever there was one.

But at the same time it’s also bristling with new technology, says Maserati. It comes with all the active and passive safety systems any car at this price is expected to contain nowadays, with tech ranging from Apple CarPlay to a full Driver Assist system.

It’s also genuinely vast inside, especially in the boot and rear seats, where legroom seems to go on forever before your knees get anywhere near the backs of the leather-lined front seats.

This alone gives the car a USP which, together with the unique Trofeo styling touches and the 202mph top speed, make it feel very different to more conventional rivals inside. There’s more rear-seat space than you could ever actually need, and that’s the point of the Quattroporte in a way. You simply don’t get this much passenger room in rivals whose hard points have been generated by algorithms.

On the move, the driving experience is dominated by two things: the strong but not quite titanic mid-range acceleration from that twin-turbo V8 engine, and the quality of ride on offer thanks to the ‘Skyhook’ electronic dampers. Plus, perhaps, the lightness of the electric power steering system, which has long been a calling card for contemporary Maseratis.

As a whole, it adds up to a car that is deceptively decent to drive, but not one that’s definitive in any specific area. And its cabin, while spacious and trimmed in high quality leather throughout, sadly lacks the inherent quality you get inside a BMW Gran Coupe, an AMG Mercedes, or a big Audi. Even the doors feel unusually light when opened or closed, while the switchgear lacks both precision and heft somehow beside key rivals. But it is quick, and it does sound good, albeit in a subdued kind of way. The Trofeo treatment brings a new Corsa mode to the drive programme, which sharpens up the chassis and steering, and has launch control. Quite how relevant this is in a sporting luxury saloon is questionable, but if nothing else it allows you to scare the living daylights out of your passengers on their way down to that casino.

Overall, it’s a car you can’t help but warm to as an enthusiast, but in the cold light of day it’s hard, if not impossible, to justify beside the main competition at this level, all of which are more capable all-round than the Quattroporte Trofeo.

On paper the Maserati Quattroporte Trofeo is one of the fastest, most exclusive sports saloon cars money can buy, with a quoted top speed of over 300kmh. In the flesh it looks expensive and sophisticated, and on the move it’s certainly rapid, and far better to drive than many other contemporary Maseratis. But its cabin, while spacious, still lacks quality beside the best at this level. And while the performance is strong, it’s far from epic, which it should be at this elevated price point.