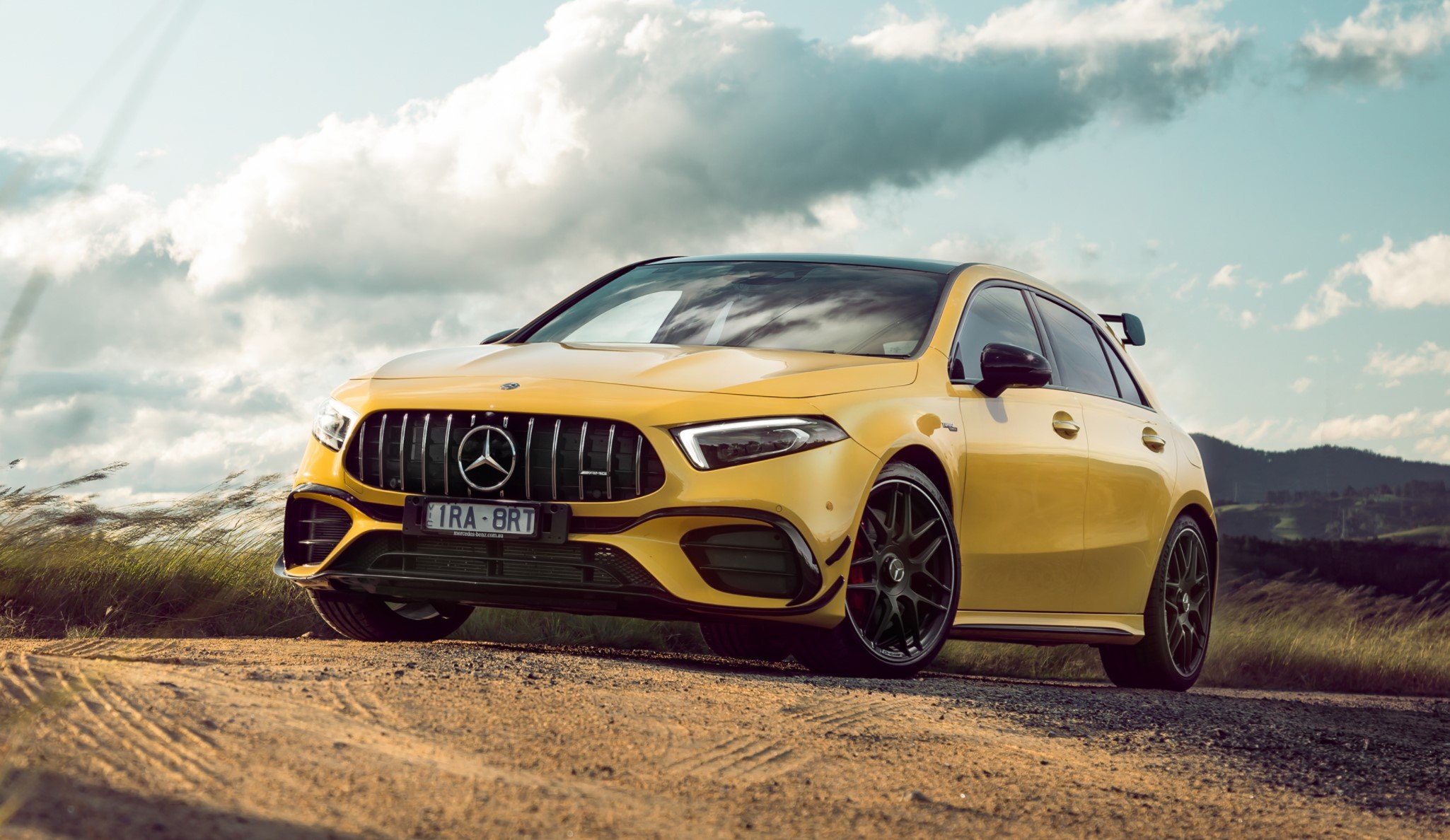 The original Mercedes-AMG A45 was undoubtedly fast, but was also unrefined, unresolved and unrewarding. We review the latest version of the hot hatch from Affalterbach.

“The world’s most powerful turbocharged four-cylinder engine in series production,’’ reads the press release for the new Mercedes-AMG A45 hot hatch and its difficult-to-classify four-door CLA45 brother. (Mercedes will tell you it’s a coupe, the most abused word in the motoring lexicon just after ‘sporty’ and just before ‘emotive’.) Trouble is, the old A45 and CLA45 struggled to entertain with an already-generous 280kW. Now that’s risen to 309kW (non-S models get 285kW), but turning up the wick alone is no guarantee of new-found greatness.

Luckily, the new 45s are off to a running start. Earlier in the year, AMG launched the A35 and CLA35, giving buyers a lower rung on the AMG ladder, just as the V6 43s and hybrid-assisted 53s have done farther up the range. And those 35s are good – far better than the leaden old 45s, and more sporty and emotive (sorry) than a Golf R. 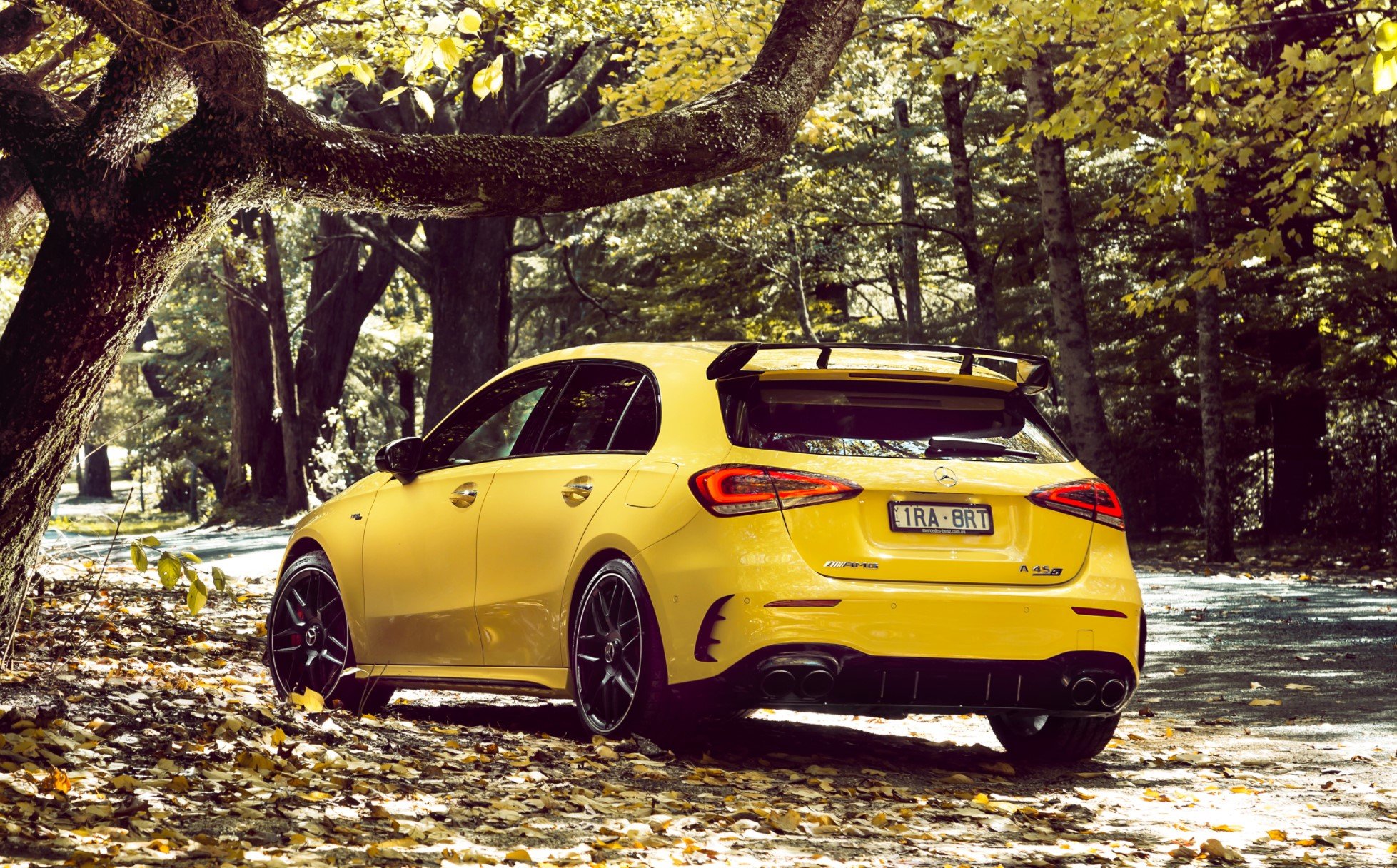 The only possible stumbling block is that they’re so accomplished, even with ‘only’ 225kW, that last time I drove an A35 I was left wondering why you’d bother spending any more just for the sake of an extra hundred-or-so horses. What could AMG possibly do differently – without coming over all Black Series and removing seats – to justify the additional cost?

Well, it’s fair to say that it’s had a go. You can’t ignore the extra power of course: 309kW with 500Nm is pretty healthy for any car, let alone a five-door hatchback and sort-of-coupe. But AMG hasn’t just wound up the boost and left it at that. In fact, this is an all-new engine that’s been rotated by 180 degrees, placing the twin-scroll turbo and exhaust at the back and the intake where you’d want it, at the front. The turbo itself uses roller bearings for reduced friction, and has divided ducts to prevent exhaust pulses disturbing each other as they flow through the turbine. There’s an electronically controlled wastegate, and the turbo is cooled by water, oil and air, the air being aided by special ducts in the engine cover, a technique learned from the V8s used farther up the AMG hierarchy.

Then there are bespoke valves, two-stage fuel-injection, two different water pumps to meet the different cooling requirements of the head and block, a two-stage intercooler to satisfy the demands of road and track use, and a baffled sump. Oh, and the 2.0-litre unit is a legitimate Affalterbach ‘one man, one engine’ unit, assembled by hand.

Chassis-wise, to stiffen the A45’s underside AMG has added enough scaffolding to build a new factory, and the springs and adaptive dampers are new to the model. Both the front and rear subframes are rigidly mounted, as is the rack for the variable-ratio steering. Power is sent through an eight-speed dual-clutch gearbox, while the 4Matic+ all-wheel-drive set-up uses AMG Torque Control, shorthand for a pair of multi-disc clutches at the rear axle to divvy up power – and enable drift mode. 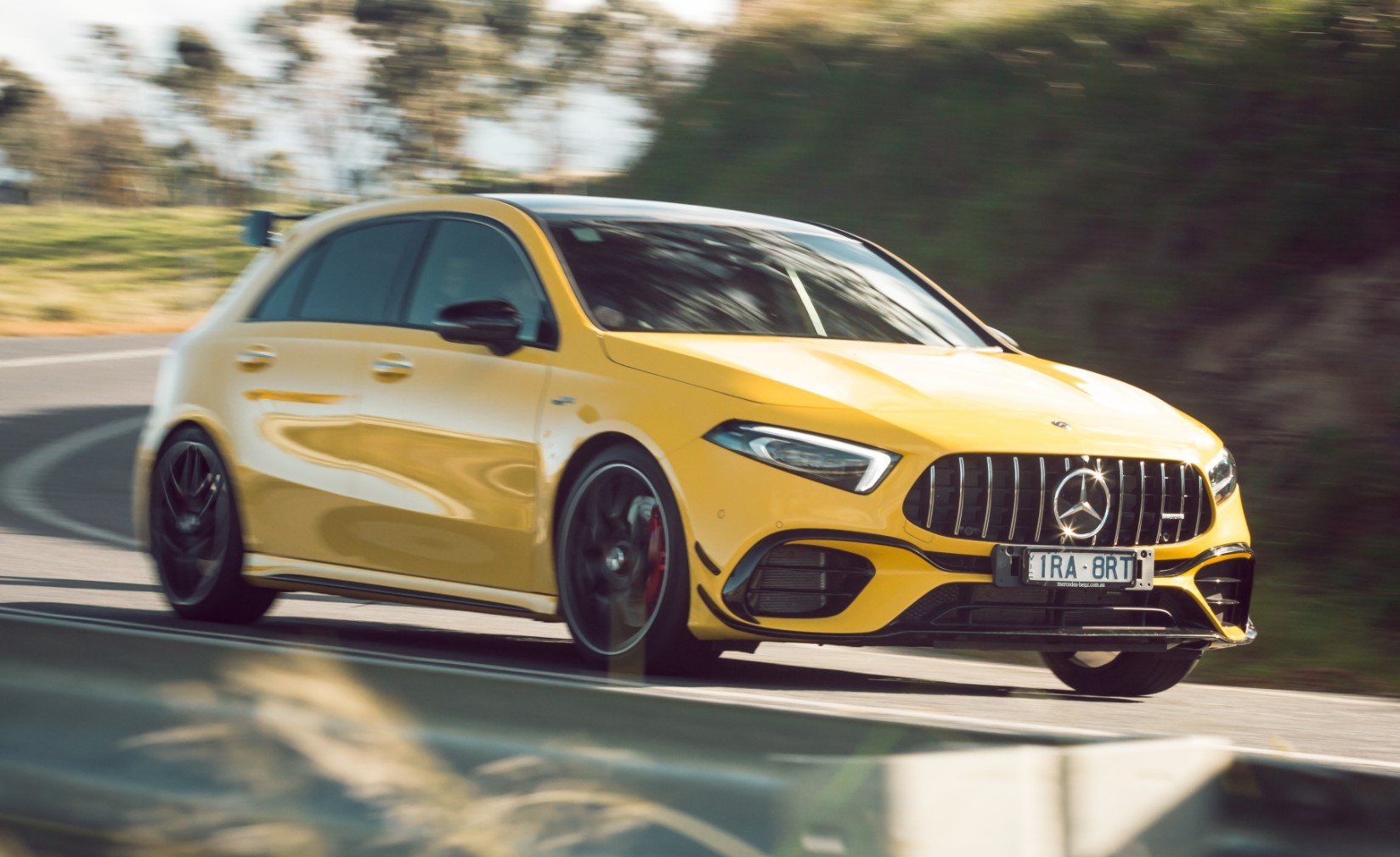 You can’t see any of this when you first walk up to the car, and there’s not a lot visually that separates A45 from A35. It’s at its most dramatic with the AMG Aerodynamics package that’s likely to be standard on Australian cars, but which our yellow test car unfortunately doesn’t have; head to the AMG configurator and tick all the boxes on an A35 and you’ll get a rough idea. The same applies inside. The firm but supportive bucket seats are nice and the wheel rim is fully enwrapped by Alcantara, and it remains one of the most modern and stylish cockpits in the class. But god help you if you utter the word ‘Mercedes’ in general conversation and wake the AI assistant, as I did four or five times in 10 minutes chatting with photographer Aston Parrott about the F1. A few rattles here and there suggest build quality could be improved, too.

The basics feel as good as in the A35, however. In Comfort mode it’s relaxed, with a better ride quality than regular A-classes (or at least a ride that’s more appropriate in a hot hatch than a family hauler), good suppression of road grumbles and wind rustles, and just a hint of exhaust growl under light throttle to reassure you of your purchase. As with the A35, don’t bother with the Sport mode. Instead, twist the handy steering-wheel dial another notch to Sport+. You can, if you like, back off functions such as the exhaust noise or suspension with another pair of wheel-mounted buttons, but the 45 delivers its best experience at its most extreme. Configured thus, everything tightens quite dramatically, apart from the ride, which seems barely any more uncompromising than it does in Comfort. The steering takes on weight, the throttle reacts more keenly, and gearchanges click through with more vigour. Sink the throttle and a loud blare fills the cabin – perhaps a little too loud sometimes, as sadly this is another car to gain interior sound enhancement, or Real Performance Sound in AMG-speak. Ignore it – maybe drop the windows – and the exhaust itself sounds fantastically naughty, crackling on the overrun and whip-cracking on gearchanges.

The A45 is certainly quicker than the A35 too, though the gulf isn’t quite as large as I was expecting. Perhaps that’s because the performance is so accessible lower down the rev range (the 5000rpm at which peak torque is quoted does little justice to an engine that pulls hard from below 2000), so you actually spend most of the time a gear higher than might usually be possible, eschewing the last thousand rpm to join corners with an angry surge of mid-range torque instead. Or maybe it’s because the A45 weighs 80kg more than the A35. Much like with the A35, the chassis also feels like a grand step forward from the old A45’s. Steering is relatively light even in Sport+, but unfailingly accurate, and as you work the Pilot Sport 4 S tyres there’s even a whisper of useful feedback through the rim. Front-end grip is remarkable, from turn-in to corner exit. Only on pebble-smooth surfaces does the nose threaten to wash wide, but good balance means this is easily neutralised with a lift, or in some cases a harder press on the right-hand pedal to wake up the AMG Torque Control diff. You can do this ludicrously early, the fronts digging in and the rear feeding around to lock you to the corner’s radius. Push hard enough and the car will rotate a few additional degrees, requiring an easily measured input of opposite lock.

With the extra weight behind its rear wheels the CLA45 seems even keener to turn, but perhaps for the same reason its steering is just a shade lighter and more remote. Its brakes are equally strong, though – if a touch soft initially – and both punch onto every straight equally hard. Of the pair, my eyes say CLA, because the sleek mini-CLS vibe appeals more.

As for the drift mode, I’m not sure it adds greatly to the day-to-day experience: Mercedes-AMG now knows how to build an engaging and likeable hot hatchback (and equivalent not-a-coupe). But then the impressive, $67,200 plus on-roads A35 showed that too, if to a less expressive extent, and it’ll also cost around $20K less…