We drive the cheapest (and slowest) variant of the new Mk8 Golf. Does it pack more of a punch than you’d expect?

This is quite simply, the cheapest Volkswagen Golf you’ll find. Yes, we thought after the recent deluge of high-end Mk8 Golf models we’ve driven (the GTI, the R, the GTD and so on) it’s time to bring things back down to earth a bit more.

So how much Wolfsburg family hatchback does an entry-level price tag get you these days? Well, you’ll likely be pleased to hear, the days of entry-level motoring have come on quite a distance in the past decade alone, when the cheapest engine and trim options were often found languishing firmly in the ‘one to avoid’ category. You get a dual-screen layout with digital instruments, but the base central touchscreen is 10.0-inch (the base Leon’s is 8.25in). You also get multi-colour ambient lighting – there are even puddle lights in the mirrors – adaptive cruise control, automatic LED lights all round with coming-and-leaving-home lighting, lumbar adjustment and keyless start. Indeed, the only real indication that this is the lowest rung in the ladder are the 16-inch wheels, which look more than a little lost in the Golf’s arches these days.

Basic trim can be had with a bunch of four-cylinder petrols and diesels. But, sticking to the penny-pinching vibe, we’ve got the 1.0-litre triple here, in base manual, 81kW form.

The days of regretting your parsimony as soon as you drive your poverty-spec hatchback off the forecourt are long gone. One glance at the spec tally tells you that, but it doesn’t tell you how grown-up and refined even the cheapest Golf is on the road. Again, let’s quickly wind the clock back 10 years, when the base Golf was lumbered with a naturally aspirated 1.4-litre unit with a pitiful 58kW and 132Nm – fine in a small supermini, but pretty asthmatic for a family car, particularly once loaded with kids and the typical gubbins family life dictates you carry.

There’s no such issue here. Peak power is best described as just about adequate in the context of today’s market, yet you’ll rarely find yourself in a situation where you feel hopelessly under-endowed unless the traffic light grand prix is your favoured pastime. The secret here is the healthy torque delivery typical of a small-capacity turbo motor, with peak twist coming in 2000rpm to ensure that mid-range pace is, while pretty far from ‘meaty’, entirely sufficient for normal cut-and-thrust driving. 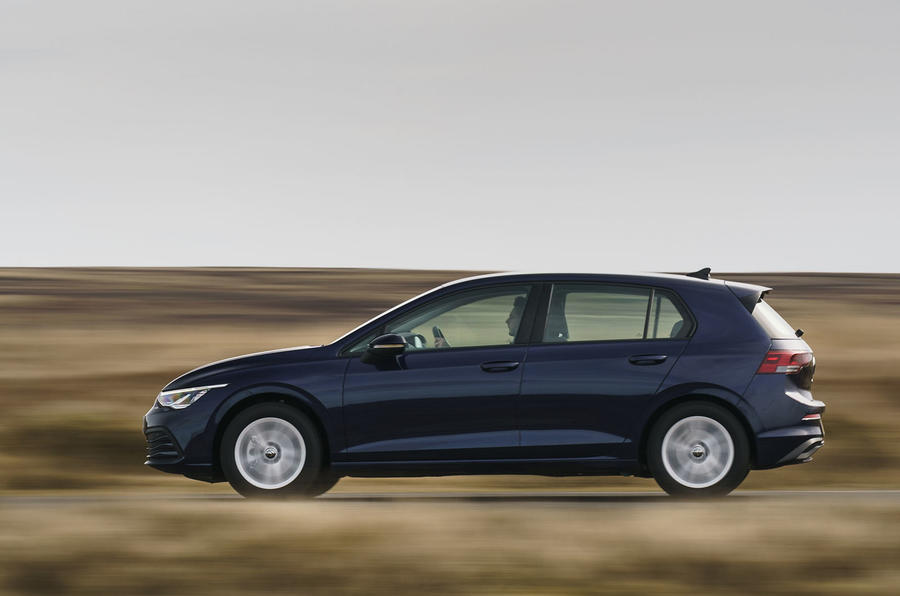 Engine refinement also plays a part here: engineers have beavered away successfully improving the NVH (noise, vibration, harshness) levels of three-pots, and the Golf’s unit might be the most unobtrusive yet. There’s little of the characteristic shudder at idle, it’ll roll along with the revs barely above idle with no fuss, and it settles down so much at a cruise that I occasionally found myself sat in third when I thought I was in fifth.

That gearbox itself is reasonably slick and tactile, mated to ratios not too languidly spaced for economy – refreshing at this end of the class. That’s not to say it’s thirsty, though: consumption around 5-6L/100km is within easy reach beyond city limits. Although we had some bones to pick with the unsettled ride of the new GTI on bumpy back roads, there’s no such issue here. Granted, only Golfs with 110kW or more benefit from the more capable multi-link rear axle set-up, but even with the torsion beam here, it’s notably more absorbent at lower speeds than the equivalent Leon.

We suspect the 16in wheels and chunky tyre sidewalls play a core role here, and the all-speeds suppleness does mean a less direct feel to the steering and more initial body lean. The Leon has the legs in terms of it feeling sharper and more connected to the road surface, though, and a Ford Focus offers a slightly broader dynamic spread between comfort and driver appeal.

Inside, the infotainment functions and assist tech are broadly similar to the rest of the range’s. That means a dashboard design that, while glossy and attractively minimalist, has traded in a good deal of ergonomic simplicity from the old model. However, you get accustomed to working with it and there’s no denying that the splashes of metal-effect plastic and strips of ambient lighting on the dash and doors make the innards look and feel classier than pretty much any new car at this price point. It’s roomy and versatile, too, but the Octavia excels more in that respect. For buyers with an aversion to paying extra for glitzy styling additions, needless equipment and more power than they’ll ever use – and I’m sure they exist in their droves – the Golf is a worthy buy that feels far more mid-spec than entry-level.

But we suspect there’s a slightly happier balance of price and capability here. Mid-range spec isn’t overloaded with extra gizmos. Rather, the material and upholstery choices are that bit classier and more in keeping with the Golf’s upmarket vibe. It’s the same story with the engine. Frugal, quiet and rarely underpowered it may be, but many will still miss the satisfaction of not having to use full throttle on so many occasions and having plentiful overtaking punch in reserve. The excellent 1.5 TSI motor doesn’t sacrifice much fuel efficiency while doing just that. New version of the Toyota Aygo city car has been spotted, and it looks to draw plenty of design inspiration from the latest Yaris. These...
Read more