Sportback variant of Audi’s ever-popular SQ5 has joined the line-up. Does it still make a compelling case against strong opposition from BMW, Mercedes-AMG and Porsche?

A mate of mine has recently ended a long-term stint at an Audi dealership as a senior service advisor. Of all the company cars he had and of all the cars that he drove, his favourite Audi was the SQ5. Even over all of the brand’s RS models and the R8 supercar, my mate would pick the SQ5. And his love affair began with the original diesel-powered model, was sustained through the switch to petrol power and flourished again with the reintroduction of the diesel-drinking SQ5. Like many of the SQ5’s buyers, my mate said that the SQ5, especially in diesel form, offers the right balance of stealthy good looks, the right level of tech, strong and entertaining performance and a healthy dose of practicality. That summary is what all performance SUVs should deliver but too many go too far trying to chase lap times and dissolve some of their appeal.

The ‘coupe-like’ SQ5 Sportback has recently joined the Audi line-up and it retains all of the above attributes but in a bolder body style. Sitting on 21-inch alloys, the SQ5 Sportback is a good-looking car with a pronounced and dynamic shoulder line, sculpted doors and prominent exhaust finishers. Most fastback SUVs bring a practicality penalty but the SQ5 Sportback offers generous head- and legroom for 180-185cm rear seat passengers, while the boot volume is down just 10 litres on the SQ5 SUV. But the driver’s seat is the best seat in the SQ5 house. Diamond-quilted Nappa leather covers all seats, but the front pair offer plenty of support and adjustment for the gamut of the SQ5’s breadth of ability. As you’d hope for a vehicle that’s likely to lug families, the SQ5 slots into the role of daily driver with ease. The one caveat is that the urban ride quality can feel a little on the firm side, a product of those vast 21-inch alloys. Otherwise, the SQ5 Sportback is comfortable, luxurious and full of tech and equipment to keep all occupants happy, entertained and safe. Just some of the highlights from the standard equipment list include 19-speaker Bang & Olufsen audio, Audi Virtual Cockpit Plus with configurable 12.3-inch display, MMI Navigation Plus with 10.1-inch centre display, Audi Connect Plus, 360-degree cameras, active lane assist and side assist, rear cross traffic assist, adaptive cruise with traffic jam assist, and Matrix LED headlights.

The engine always feels like it’s making either peak power or maximum torque and it feels like it could take more revs. It’s also assisted by an Electric Powered Compressor (EPC) that helps with throttle response when the gas-driven turbo has yet to spool up. And it’s a lively performer, covering the 0-100km/h benchmark in 5.1 seconds and powering on to a claimed top speed of 250km/h. The former number is impressive when you consider the SQ5 Sportback’s 2085kg mass, while the latter impresses against the car’s frontal area. 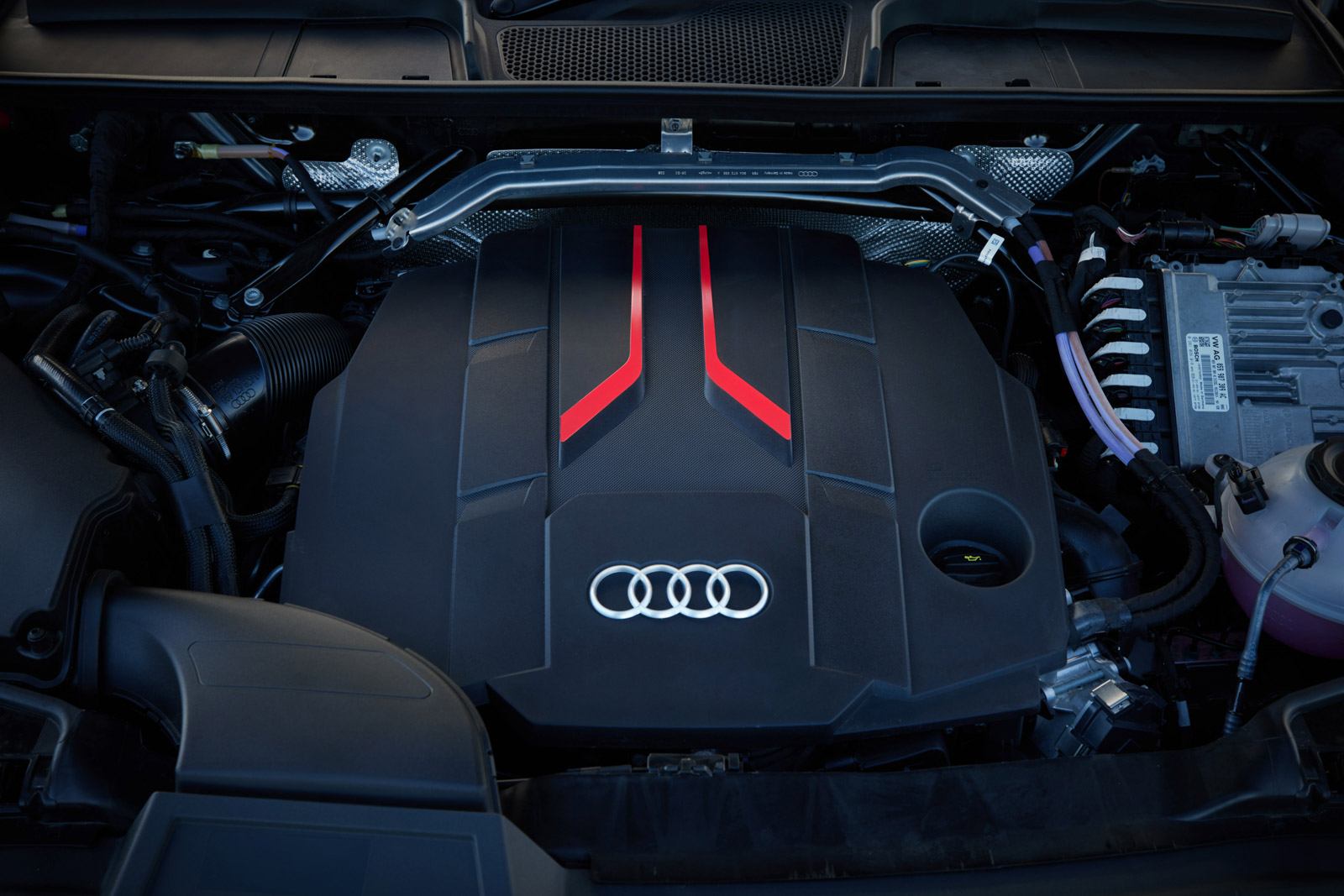 Response from the engine is impressive, though lag isn’t totally banished by the EPC, but the V6 partners well with the eight-speed torque converter gearbox to ensure that the SQ5 is rarely milliseconds away from delivering on requests from the throttle.

The drivetrain and chassis work in harmony to deliver serious pace on challenging tarmac. Yes, 2085kg makes itself known if you insist on maximum attack at every corner (the SQ5 will push into understand if you’re clumsy or too aggressive) but you need to take your brain out to really trip up the chassis. There’s not a great deal in the way of feedback from the steering but you know that there’s always an abundance of grip and traction from the 255/40 R21 Pirelli P Zero rubber and quattro all-wheel-drive system. The suspension does an impressive job of managing the mass and the brakes take plenty of punishment before they wilt. And even when they do, a few kilometres of calmer driving see the pedal and confidence restored. Rivals? Given the SQ5’s diesel-sipping V6 and competitive price point, there’s little in the way of a direct competitor but BMW, Mercedes-AMG and Porsche all offer something that you’d potentially cross shop. BMW asks $123,900 for its X4 M40i, while Mercedes-AMG wants $130,724 for its GLC43. Not only are both more expensive than the $110,900 SQ5 Sportback (itself $4400 more than its SQ5 SUV sibling), but both are powered by petrol-drinking six-cylinder engines. In the case of the BMW, it’s a turbocharged 3.0-litre straight six that’s good for 285kW and 500Nm, and delivers a 0-100km/h sprint of 4.8 seconds. Then there’s the recently facelifted Porsche Macan S which makes a compelling case for itself at $105,800. Like the BMW and Merc-AMG, the Macan S is petrol powered, using a variant of the twin-turbocharged 2.9-litre V6 found in the Audi S4. Here it makes a lusty 280kW and 520Nm, and runs to 100km/h in 4.6 seconds with Sport Chrono or 4.8 without. It also boasts the best chassis of the class but unlike the above three isn’t available with a coupe-style body variant.

If frequency of fuel stops is important to you, the diesel-powered SQ5 will have a clear advantage over this trio. The Sportback body style isn’t ground-breaking news for the SQ5 range, but it will clearly broaden the appeal of a model that has been massively popular for Audi.