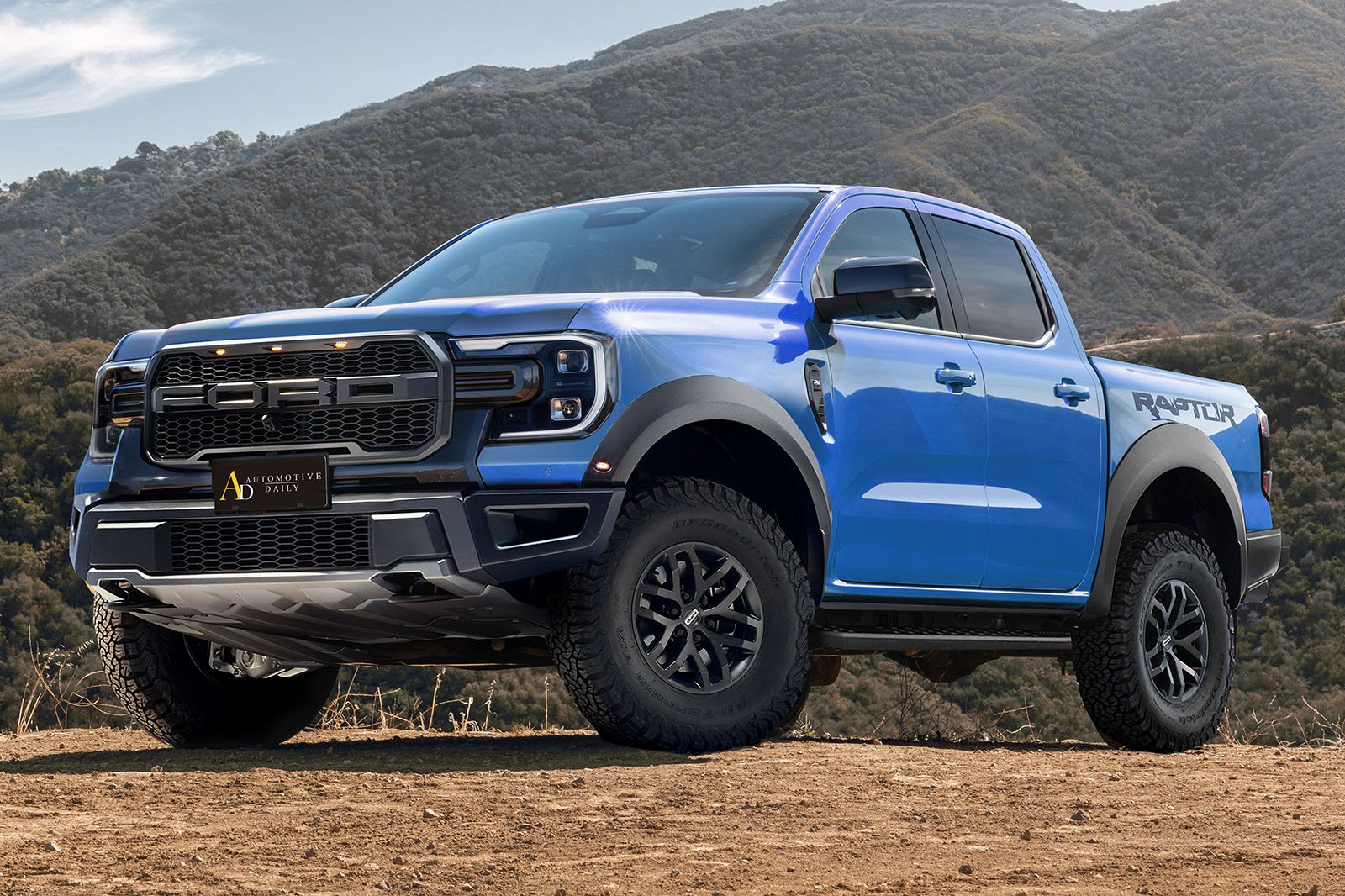 We imagine what the new 2022 Ford Ranger Raptor could look like and put together some details ahead of its February 2022 debut.

Ford has barely finished showing off its new generation Ranger ute but it is also gearing up to show us the flagship Raptor replacement soon.

Having revealed the normal suite of models up to the Wildtrak this week, Ford also snuck in a teaser that lets us listen to the engine of the new Raptor and also confirmed an unveiling date of February 2022.

As we enjoy rendering what future models look like here at Automotive Daily, we put together bits from the latest Ranger and F-150 Raptor to imagine what we can expect. While we thought the new Code Orange for the F-150 (which looks more like red) could be an option, it’s a bit too close to the Wildtrak for our liking and we opted for a nice shade of Performance Blue, complete with the requisite Raptor sticker on the rear flank.

Upfront is the obvious Raptor grille, complete with the F-150’s unique triple-LED lighting so that even at night other drivers will read the lettering which is finished in black. The C-shaped LED headlights have been tinted a little and there’s also an indicator light on the front wheel flares. Underneath is the usual bashplate and bespoke bar that help for off-roading performance. Likewise, there are steel steps down the side and easily recognisable 17-inch black alloy wheels under the flared guards. We wonder if this design will be updated, but the previous iteration ran on 285/70 BFGoodrich K02 all-terrain tyres which is a solid choice.

Ford has obviously not given any details away on the new Raptor yet except for its sound teaser, which certainly purrs like a V6 petrol turbo engine. There are two choices on the table if that’s the case: 2.7-litre or 3.0-litre V6 petrol twin-turbo motors. The 2.7L is used in the US F-150 Raptor but also the Bronco, which is related to the Ranger underneath. The 3.0L has been previously reported by US publications as the choice for the new Ranger Raptor but it comes from the Ford Explorer.

Output will be around 230-300kW of power and 510-560Nm of torque depending on the engine and tune used. While likely down in torque on the expected 600Nm-plus from the new 3.0-litre diesel turbo available in the Ranger line-up, the power will be a good match to the Raptor’s Baja-racing origins, and of course, expect the same sort of Baja mode found in the out-going Ranger Raptor. Also expect a similar focus on the chassis, with a Watt’s link suspension setup completely different to normal Rangers and providing great articulation with Fox suspension that can take a fast-paced pounding over the dunes, but is unlikely to meet the same tow and payload capacities of the workhorse range.

Ford will reveal the new Ranger Raptor in February 2022 and while we will get to officially see it then, we still might not know many specific details. However, with Australia such a strong market it could launch here in the same year, or at least by mid-2023.