Maserati finally arrives in the mid-size premium SUV class with the stylish Grecale but matching the Porsche Macan for substance isn’t easy.

Maserati may be going all-electric in time, having outlined the future of its ‘Folgore’ electrification strategy, but the Grecale mid-size SUV is where the brand’s renaissance really starts.

To make money – and the brand will need to prove itself viable under the Stellantis group umbrella – Maserati needs to compete strongly in this class. After Porsche released its Macan SUV in 2014, a direct competitor to the Grecale, it became the German brand’s best-selling model, highlighting the market’s appetite for this kind of car, which has only grown over the last eight years. Being based on the same Giorgio platform as the Alfa Romeo Stelvio SUV is a good place to start, while the powertrains offer electrification across the board.

The Grecale Folgore will become Maserati’s first EV when it launches in 2023, but for now there’s a choice of two 2.0-litre turbocharged four-cylinder mild-hybrid options offering 221kW in the entry-level GT trim and 242kW in the mid-spec Modena (both have the same 450Nm of torque).

Above this sits a 3.0-litre twin-turbo V6 version of Maserati’s new Nettuno unit that also powers its MC20 sports car, pumping out 390kW and 620Nm of torque in the Grecale Trofeo. These powertrain options also dictate equipment levels. While we sampled the thundering Trofeo, it’s the more affordable GT we’re focusing on in this review. 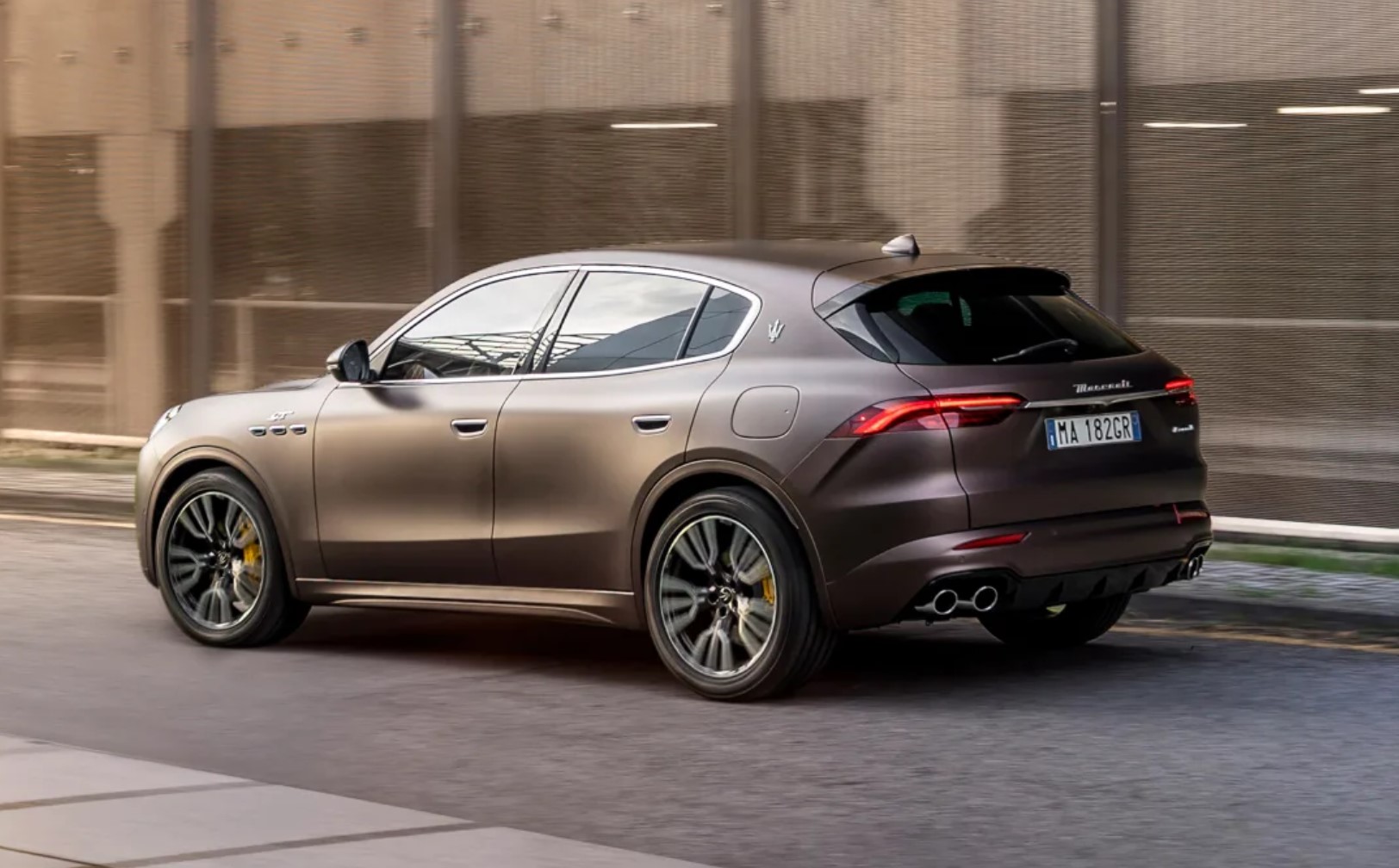 Maserati says the MHEV system’s extra torque makes it feel more like a six-cylinder. While this is a stretch – not least due to the droney engine note, which doesn’t project ‘luxury’ – you do notice some assistance giving strong mid-range acceleration around town and on country roads.

Officially, the 0-100km/h sprint takes 5.6 seconds, but at higher revs the 1870kg SUV doesn’t feel so rapid, so it’s best to cruise in the Grecale. At a more leisurely pace the eight-speed automatic transmission’s shifts are slurred nicely.

The car’s steering feels fast and positive enough. Despite the weight, while we could sense some roll in corners it still feels agile for its size. However, our test route through the centre of Milan and around the outskirts of the city didn’t let us explore the car’s handling any further than a few left-right bends on a horribly torn road surface, so we’ll have to wait for a full judgement until we drive it in Australia. Being shod with winter tyres in 24-degree heat also didn’t help the Grecale’s cause. The ride quality raised questions too, even though our Grecale GT model was fitted with optional air suspension (it’s standard on the two higher trims). Initial impressions suggest that this car has a soft set-up offering compliance over gently undulating roads, but that riding on 20-inch wheels the chassis occasionally struggles to deal with sharper bumps thrown its way, sometimes crashing and thumping.

You get a sense there’s the character of an agile, engaging SUV wanting to break free, but when it comes to ride and powertrain refinement, we’re not sure the Grecale fully meets the luxury aspirations the brand is targeting.

Inside, things are better. There are lots of lovely materials, including painted wood on the doors, stitched leather and some nice metal trim pieces. The craftsmanship in the finishing of these areas seems strong too, which serves to highlight the few creaks and squeaks we heard from our early-build test car. Maserati has focused on a minimalist, modern design that promotes functionality, it claims, so there are few physical controls. Most functions are carried out through the central 12.3-inch touchscreen and a smaller 8.8-inch panel that sits below it.

It’s a little overwhelming at first, but you get used to the system’s layout quickly, while the graphics are sharp and the responses quick enough. It comes loaded with features and strong connectivity (including wireless Apple CarPlay and Android Auto) even in this base-spec GT car.

There’s also a digital dash and a new digital clock – the first in the brand’s history – that is the focal point for voice commands and can display a compass rose or G readings if selected. Alexa integration features as part of the Maserati Intelligent Assistant system, while other connected services such as fuel price data and over-the-air software update capability come built in.

It’s a massive improvement over Maserati’s old Fiat-Chrysler-sourced infotainment systems and will be a big positive in the car’s push to steal sales from rivals such as the Macan. But then with prices set to start from under $100,000 when it goes on sale in Australia, you’d expect this from the Grecale.

It beats its German rival on some practicality points, though. The extra length in the platform’s wheelbase helps to create a good level of legroom, while head and shoulder room help make the Grecale the most spacious SUV in its class, according to Maserati’s claims. We had no trouble in the rear.

With 535 litres of boot space (a little down on the 570-litre Trofeo due to the MHEV system’s location) it also offers more luggage capacity than the Macan. Achieving a claimed 8.7L/100km and 198g/km of CO2 means it’s more efficient, too.

The Trident brand has always carried a certain cachet that appeals on a different level to some of its German competitors, and with the sleek design inspired by the MC20 in some areas (also, no detail is purely decorative, everything has a function) the Grecale sits easily in this class, even if it feels lacking in a few areas compared with the best.

The Grecale is the car Maserati has needed in its line-up for nearly a decade. It offers something a little different in the small luxury SUV sector and that alone will be enough for some to buy it. Arriving with mild electrification – plus a full electric model waiting in the wings – there’s enough technology to compete in this class on merit. However, from our initial drive, in some areas the Grecale needs to nail, initial impressions suggest it falls short. Our car’s ride comfort and refinement could have been better, even if the quality of the materials inside mostly did live up to its predicted price.