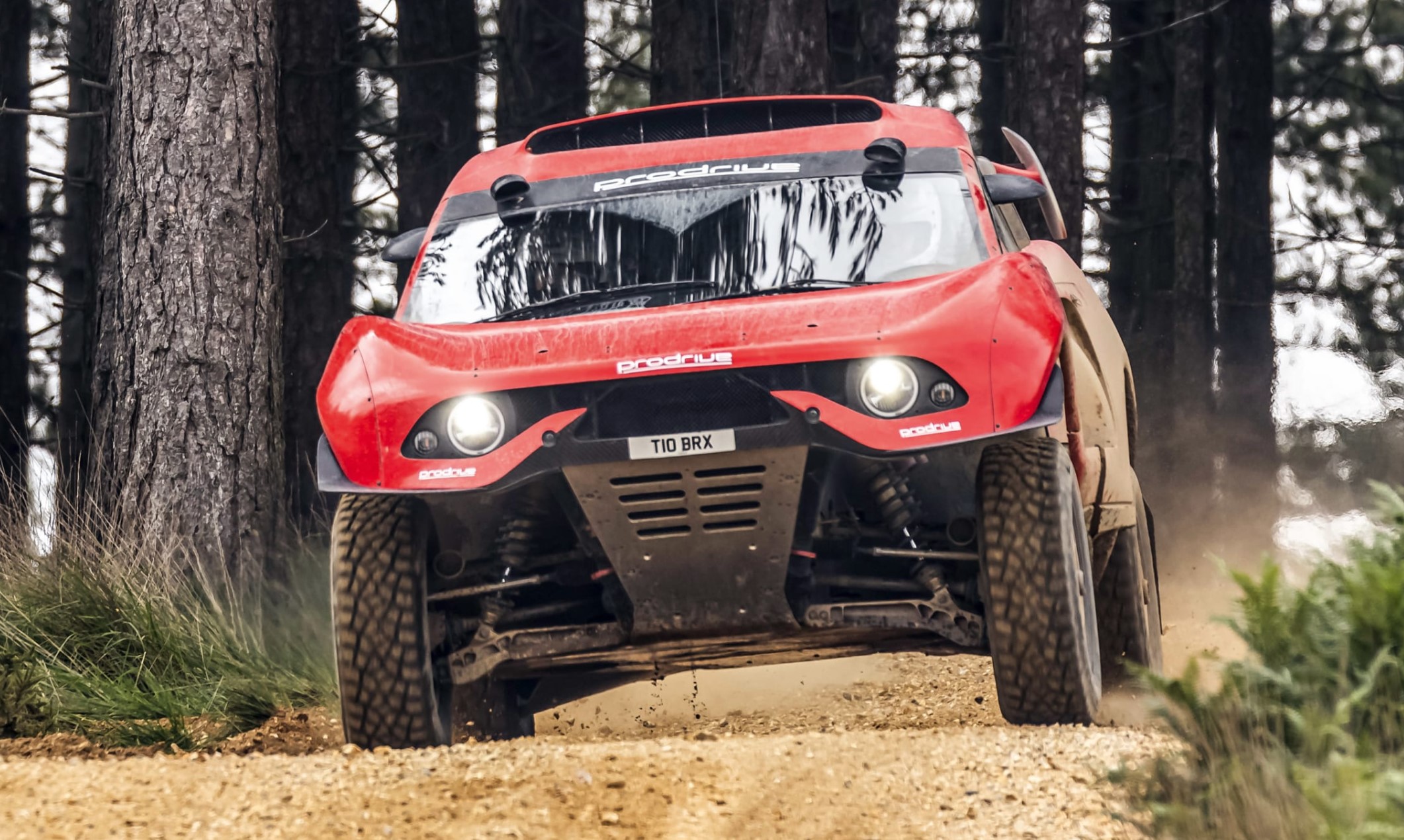 Don’t be fooled by its odd looks, the Prodrive Hunter is a truly impressive loose surface machine. We’ve experienced it first hand.

This is the Prodrive Hunter. Built to battle the rigours of international rally raid events, it is arguably the final piece of the puzzle for one of the most successful and celebrated names in world motorsport. With decades of success at the highest levels of world rallying, touring cars, Le Mans and F1 (via David Richards’ management of the BAR Grand Prix team at the turn of the millennium), the Hunter has overall Dakar victory squarely in its sights.

Driven by Sébastien Loeb and Dakar veteran Nani Roma, the Hunter and the BRX team (backed by Bahrain’s sovereign wealth fund) made their debut in this year’s event, and while it was not without incident (Loeb eventually retired), Roma secured 5th overall – the best-ever result for a new team and vehicle on its maiden Dakar. Now, in arguably its toughest test yet, the Hunter is being driven by a handful of motoring journalists… You really have to stand next to this machine to appreciate its scale. At 4.5m long, almost 2m high and weighing 1850kg dry, it dwarfs regular competition cars. Built around a bespoke tensile steel tubular structure, the front end cradles a 294kW/678Nm 3.5-litre Ford EcoBoost V6 engine. Behind the tight two-seat cockpit are mounted spare wheels and a colossal fuel tank that can hold up to 500 litres of petrol.

Suspension is wishbones all-round, controlled by twin fully adjustable dampers at each corner. A six-speed sequential gearbox drives all four wheels through front, centre and rear differentials, with 16-inch wheels wrapped by regulation rubber for the T1 class in which the Hunter competes. It’s a slightly odd-looking thing. The carbonfibre body is designed by Ian Callum, so there are sculpted surfaces and clean detailing that give it a strangely familiar look (squint and it could be a super-sized Jaguar F-Pace from some angles), but there’s so much hardware beneath it that the body doesn’t quite look big enough. The plan is for us to ride alongside Roma, then drive it ourselves on a surprisingly long, fast and potentially unforgiving test loop that has been improvised out of the British Army’s Royal Tank Regiment facility at Bovington in Dorset, England. The Hunter is described, by Prodrive at least, as a driver-friendly machine. This might be true but, as we’re about to discover, all things are relative, for while it’s doubtless straightforward to operate, driving it as its makers intend is another kettle of fish entirely. At least if you’re dialled-in to driving on a mettled surface in a low-slung circuit racer.

Roma is a true legend of Dakar. With 25 starts and two victories – one on a motorcycle in 2004, the other in a car in 2014 – few have more skill or experience than the 49-year-old Catalan driver. He’s a super-nice man, too; friendly, fun and brimming with the assured confidence of someone who is a master of their craft. The first thing that strikes you upon being invited to climb into the passenger seat is just how high off the ground the sill is. Not that I’ve ever ridden a horse, but it seems like trying to get on one without a mounting block. Once in, the next thing you notice is how cramped the cabin is. Imagine a Range Rover with the cockpit space of a Lotus Exige and you won’t be far off.

The next few laps are a real eye-opener. And, at certain points, an eye-closer. Not because it feels like Roma is going to throw us into the trees, but because the pace he’s able to carry across terrain that would eviscerate a WRC car is entirely at odds with what your brain tells you is possible. It really is a tremendous demonstration, both of the Hunter’s capabilities and Roma’s effortless skill. The way he can make the car pivot using left-foot braking is befuddling. When combined with the additional assistance of the deep ruts – which he uses like a Scalextric car uses the slot – it’s otherworldly. Every now and again the Hunter climbs out of the ruts and kicks loose, but even then it’s always driving forwards, Roma taking every opportunity to upshift and tap back into the EcoBoost’s rich reserves of torque. It feels pretty much unstoppable and makes a fabulous noise: a sharp blare that’s not dissimilar to Ford’s GT Le Mans class winner.

The punishment is intense and relentless. Anything beyond the hold of your safety harness flaps and flails about unless you bury your feet into the bulkhead and keep your arms tight to by your sides. Meanwhile your torso is braced against the pummelling, core muscles engaged, breaths fast and shallow – or held until after the next foreseen impact.

It’s hard to believe those endless, majestic desert stages you see from Dakar coverage are this rough, but when we complete the repeat loop and head towards the paddock, Roma confirms some stages can be like this for hundreds of kilometres. Likewise, he says, the attacking pace at which we’ve tackled this makeshift stage is also representative of Dakar.

The suspension is extraordinary, wheels punching up and down in the arches like a mogul skier’s knees, brutal potholes and ridges absorbed as though somehow disappeared in a sleight-of-hand magic trick. And yet the incessant pummelling is exhausting as your head rattles around like a pea in a whistle and your eyes attempt to scan the road ahead. This is sensory overload in three dimensions. And now it’s my turn.

As is the way with modern motorsport machinery, everything works brilliantly. The sequential transmission is a doddle to punch up and down, the brakes reassuringly powerful, the steering light enough to require modest effort while retaining a sense of connection. Trouble is, because there’s so much going on in terms of vertical body control, lateral body roll and ever-changing traction levels at either end of the car, if you wait to read what the Hunter is doing before you commit with your inputs you’re always one or two steps behind the unfolding action.

To be totally honest I feel pretty lost during my stint. Which is fine, actually, because it’s always good to be challenged. Much of the challenge lies in becoming comfortable with the lofty ride height and the momentum associated with what must be a good 2 tons with today’s fuel and other fluids. Throw in a loose and ever-changing surface, soft suspension and chunky off-road tyres and the feelings I’m getting from the car are entirely alien.

What’s frustrating is the sense that the car is poised and waiting for you to give it some instructions. Indeed it’s all but screaming at you to make your steering inputs early, get the car lined-up, chase the throttle, get the differentials working and use the knee-deep ruts and hip-high berms to positive effect. When you do manage to drive the car into and through a corner or two with meaningful conviction, it’s a miraculous sensation. The traction, lateral and forward acceleration, suspension control and general poise somehow brings a kind of peace to the otherwise violent process of lobbing this huge machine across punishing terrain. And then I hesitate, effectively coasting into the next sequence of corners, and it feels like the rug has been pulled out from beneath us.

In a welcome but somewhat unexpected way, this test has taught me as much or more about Dakar and its drivers as it has about the car. Roma says you simply cannot attack the stages for seven or eight hours a day with a flat-out mindset. Rather you need to find what he describes as your tempus – the sweet spot at which you settle into the rhythm of the stage and its surface, flowing with it rather than fighting against it. Even on this test stage you can see him find this zone, and I’m not sure I’ve experienced a man and machine more in harmony.

Such is the pace of development in rally raid that Prodrive has already designed and built an evolution of the Hunter for the new T1+ class: some 300mm wider, with 350mm of wheel travel compared to 280 for the T1, massive 37in tyres mounted on 17in rims versus the T1’s 32in tyres and 16in rims.

Even better news is that Prodrive is building the rumoured road version of the Hunter. With more power (360kW+), a more luxurious interior and Ian Callum once again responsible for the styling, the project is well advanced. Judging by the grin on David Richards’ face when discussing it, this desert hypercar will be one of the wildest road cars of 2022.

F1, GT and WRC head to Belgium this month

Kia Soul EV Boardmasters Edition is made for surfers