The new Subaru Forester Wilderness is much more than a sticker-pack SUV for the bush.

It is only fitting that our first test drive of the new Subaru Forester Wilderness edition takes place along the leafy green roads around Bend, Oregon. While the model’s name sounds new and certainly matches the tougher components and lifted suspension underneath, it is not the first Wilderness badge applied to the back of a Subaru, that honour belongs to the Outback Wilderness having already launched in the US.

This Forester is the latest model under the Wilderness sub-brand and Subaru Australia is watching keenly, knowing that this is the sort of beefed-up all-wheel-drive Australians would be into. It has received new suspension parts with a proper lift and thus better approach, breakover and departure angles. The transmission has been revised and that brings more low-end torque. There are also extra guards and cladding for protection, and of course, for looks. Subaru says the Wilderness stable will grow, so we expect models like the XV to also join the line-up. With the Forester being such a popular model in Australia it could be the first to wear the Wilderness badge locally, but equally popular might be an XV version.

This model tested here is the 2022 facelift, with some new parts up front and at the tail. Add the new cladding, unqiue badges, larger roof rails and black 17-inch alloys with Yokohama Geolandar off-road rubber and it is a fairly different-looking take on the tried and true recipe we’ve had here for the past few years. It’s the sort of car that will look at home in the bush set up with things like a rooftop tent…speaking of which, those larger rails can hold an upgraded 100kg when on the move or 400kg when stationary. Underneath the bonnet is a familiar 2.5-litre four-cylinder petrol engine producing 134kW and 240Nm through a CVT automatic to Subaru’s ubiquitous all-wheel drive system. The drivetrain is nothing special and a more powerful motor with some oopmh would be nice. However, some modifications to the CVT do add better low-end torque and it feels noticeable when taking off. It also helps reduce the final crawl ratio from 3:70 to 4:11 which is helpful for situations such as scrabbling along rutted tracks.

A focus on improving performance for off-roading goes into the suspension, which has been lifted with longer coils and new shock absorbers to provide 234mm ground clearance that is higher than the suburban SUV crowd; even the running clearance on the Jeep Cherokee Trailhawk is 221mm. The approach and departure angles are also increased to 23.5 degrees and 25.4 degrees respectively. But improvements they are, they don’t beat the Trailhawk with its 29.9- and 32.3-degree specs. 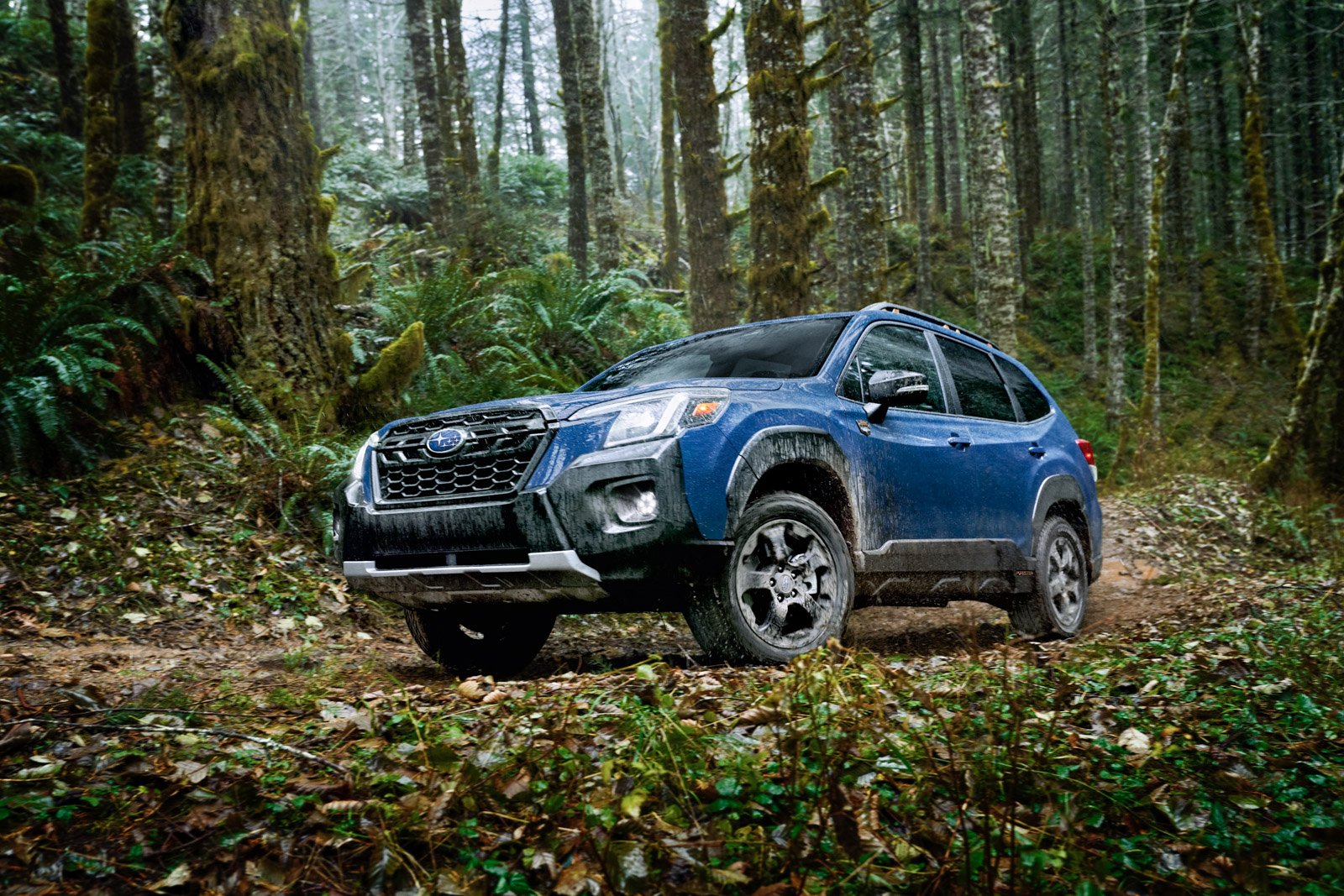 We were able to put all to the test in the wilderness around Oregon, the off-road-biased rubber and improved low-end torque function of the CVT showing that the Subaru has a very good all-wheel-drive system that finds plenty of grip. The ground clearance really is a boon over the standard Forester and gives confidence over rocks and obstacles, plus there’s now a front-facing camera that can be activated on tricky trails. X-Mode, Subaru’s own off-road mode function, adds to the ability with hill descent control and a variety of traction control settings that pop up in the digital dash section. It’s a good car off-road for those wanting to adventure, although sure, it won’t be as comfortable doing anything that higher and more protected four-wheel drives tackle.

So what about general compliance on the sealed road? Well, the Forester feels better setup than the Outback Wilderness when cornering and cruising, with less pitch and roll. Quite a good compromise considering there are some fairly significant changes underneath. Inside the cabin, the Wilderness theme continues with copper stitching and highlights, unique badges, and more practical touches like rubber floor mats and waterproof seat fabric. The rest of the equipment is similar to the Forester models that have been around for a few years now, and that means an ergonomic and thoughtful layout, if not exotic in design language. Add to this Subaru’s rather good EyeSight safety system and it is a familiar yet special enough experience to sit in. Overall, this is a capable take on the already confident-off-the-road Forester. The suspension changes inspire some proper off-roading and the practical improvements such as increased roof load are just what the weekend warrior crowd needs. All we need now is for Subaru Australia to get it here.