We try out a prototype version of the BMW XM V8 plug-in hybrid SUV ahead of its official arrival.

BMW’s M division turns 50 this year, and to mark its special anniversary in 2022 the brand will build itself a birthday present. Called the XM – previewed by last year’s Concept XM – we’ve had the chance to get behind the wheel of an early pre-production model.

It’s the M division’s first plug-in hybrid and takes the form of a large SUV – maybe not the car you’d expect from BMW to celebrate a landmark birthday, but it’s full of technology. It’s powered by a new 4.4-litre twin-turbo V8 engine, codenamed S68. This is supplemented by a 25kWh battery that powers an electric motor mounted inside the car’s eight-speed automatic transmission, which sends power to all four wheels through BMW’s M xDrive set-up. You might expect this output to deliver extremely rapid performance. However, while BMW isn’t quoting a kerb weight for now, drivetrain engineer Johannes Franz told us that the production-ready XM is likely to weigh more than 2.3 tonnes – and it feels it on the move.

There is noticeable assistance from the electric motor, especially when you floor the throttle in a high gear, but the XM doesn’t feel as fast as you might imagine. There’s still a decent amount of performance – the production car’s 0-100km/h sprint will be completed in “easily sub-five seconds”, according to Franz – but you just have to work the powertrain harder than you might expect to access this. When you do there’s an augmented V8 rumble in Sport mode. Franz also told us that there’s headroom in the plug-in hybrid’s set-up to offer an even greater output. The Concept XM served up 544kW and 1000Nm of torque, so expect to see more potent models in the future, while this plug-in powertrain will also make its way into other future M cars, including the next-generation M5.

BMW’s chassis engineers have worked just as hard as those on the powertrain to overcome the car’s mass, and with clever a 48-volt active anti-roll system the XM remains impressively flat and stable through corners that would usually see an SUV like this roll around. The steering isn’t particularly communicative, but there’s a good level of grip and more agility on offer than you might expect in a car this big and heavy. Rear-wheel steering helps here too.

However, the suspension set-up is quite firm to deliver this trait, so even in the adaptive dampers’ softest setting, on our car’s 22-inch wheels (23s are available as an option) the XM felt firm. Sport and Sport Plus further tighten up vertical body movement, offering even more stability, but they also further compromise the ride quality to the point where our (admittedly pre-production) test car did react harshly to some lumps and bumps. This is a shame because BMW says it’s also focused on delivering comfort. While the ride might not hit the mark, the seats do; even in the rear, the M Lounge seat bases are soft and absorbing, while there’s masses of legroom and even good headroom despite the tapering roofline towards the rear.

The battery pack sits under the rear bench, and with a full charge, BMW claims an all-electric range of 80km will be likely once it’s undergone WLTP testing. However, on a warm day, our test car was showing more than 100km. 7.4kW charging is standard, so a full top-up will take less than three and a half hours. The brand hasn’t confirmed efficiency data yet.

In eDrive mode, the XM is superbly quiet and refined, and Franz says that acoustics is an area that will improve further still, along with the quality and speed of the transmission’s shifts, which felt smooth and rapid enough to us in the car’s 95-per-cent-ready state. 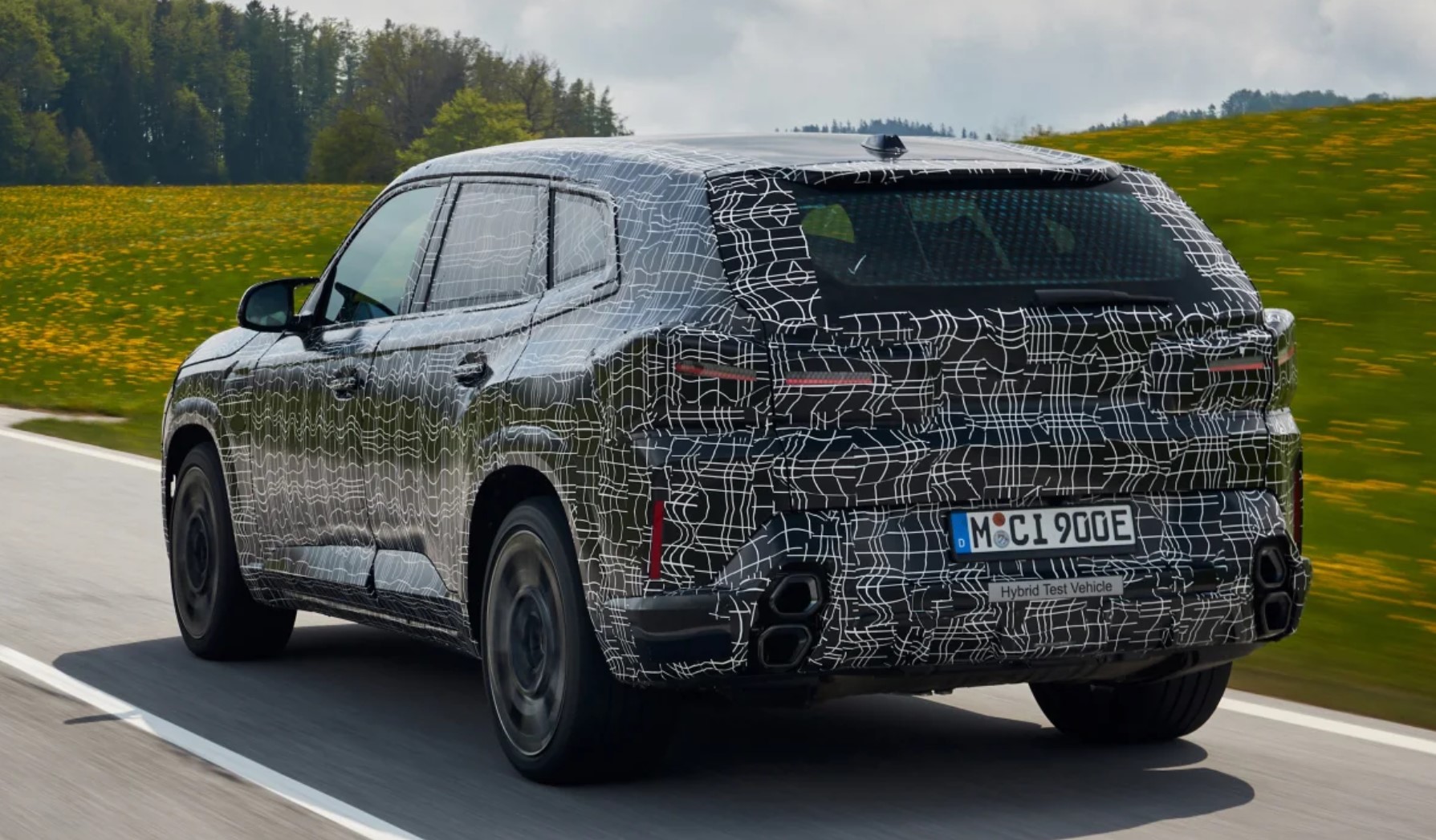 There are two regenerative brake settings, but we felt even the ‘Max’ mode could be stronger. However, Franz explained to us that this was a conscious decision made by the M division, that the focus on driving dynamics had to come first and that more gentle recuperation doesn’t affect weight transfer as much when slowing down, keeping the car more stable. One-pedal driving was never on the menu for the XM.

Once you push past the regenerative braking and call on the enormous 20-inch front discs and equally huge calipers, there’s plenty of stopping power from the second generation of BMW’s brake-by-wire system.

Locating the battery under the rear seats has helped packaging, as has integrating the electric motor into the gearbox casing. However, with a fuel tank to accommodate too, the boot is ever-so-slightly compromised. The luggage area is deep, but the floor is also high, and there’s no underfloor storage for the charging cables, so BMW has developed a special cable bag for the XM that sits in the boot. There’s also only one charging port, mounted on the front wing, which could be an oversight on a car so big. It’s unlikely BMW will tweak this before the XM’s official launch in September with a possible Australian launch in 2023 – although confirmation from BMW Australia is yet to be announced.

Our first taste of the XM highlights the M division’s future direction, and there are many positives when it comes to the integration of petrol and electric power, providing a lifeline for larger engines such as BMW’s V8. The XM offers plenty of space inside and we’re sure the tech will match up, but it’s not the most dynamic car to ever wear an M badge, while the ride is on the firm side.