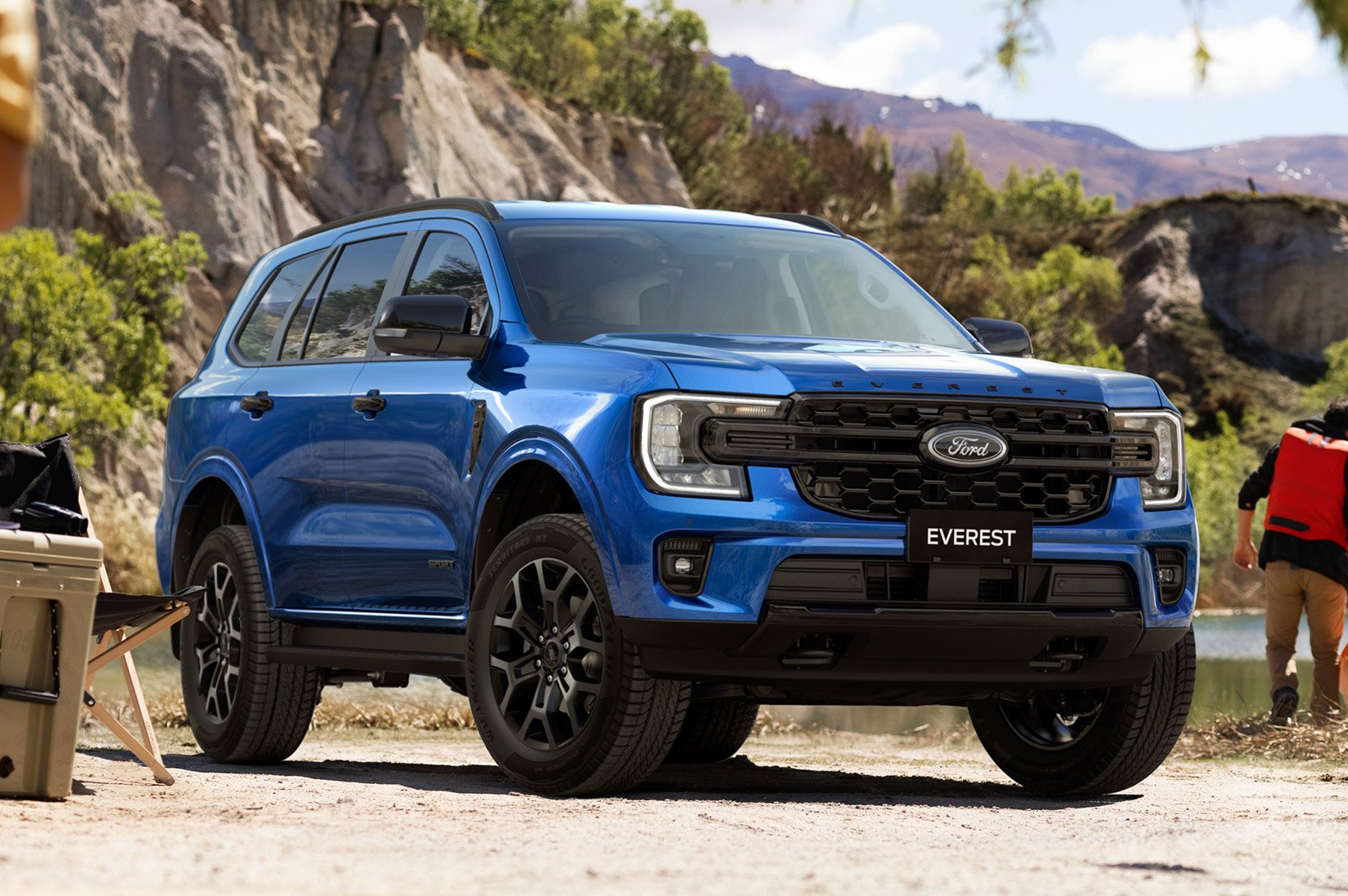 Ford has revealed the all-new Everest for 2022, showing a new top-spec Platinum variant with V6 diesel turbo engine, and three other trim models confirmed for Australia: Ambiente, Trend, and Sport.

The Everest, which is based on the new Ranger, brings similar looks to its ute counterpart but with a wagon rear. For this generation, Ford is bringing a new premium feel in the way of a highly specified Platinum model with a diesel V6 turbo engine, large 21-inch wheels, and finer materials in the cabin. Yet Everest will continue to offer rugged ability with standard ARB accessories available and more modest spec levels for those who need it. “When we started imagining the Next-Gen Everest, we started not at the beginning but at the end: With our customers,” said Ian Foston, chief platform engineer for Everest.

“They’re people who like adventure, recreation and being able to go out with family and friends. Whether they’re conquering sand, rocks or city life, these customers appreciate the utility, capability and spaciousness of an SUV.”

Ford calls its aim for Everest “Tough on the outside, a sanctuary on the inside, amazing capability underneath.” “One of the first things you’ll notice when you get into a new Everest is how quiet it is. We’ve all been in vehicles with multiple rows of seats, where you have to twist your head around and almost shout to be heard by passengers in the second or third rows,” said Max Wolff, design director for China and International Markets Group.

“That’s an issue we wanted to solve for Everest, so the interior would be a quiet place in which you can easily talk to your family or friends and enjoy the journey together.” While the Everest Ambiente, Trend and Sport variants get an 8.0-inch digital instrument cluster, the Platinum receives a larger 12.4-inch display. A 10.1-inch portrait-style infotainment display features in the base model Ambiente, while Trend, Sport and Platinum get a larger 12.0-inch unit.

The dash has dual cupholder recesses plus dash-mounted ‘pop out’ cupholders for front-seat occupants. All variants get integrated wireless charging and an electric parking brake. Heated and ventilated front seats are standard on Sport as well as Platinum, and optional on the Trend.

Access to the third-row seats is now easier thanks to second-row seats that slide further forward than before. The second-row slides with a 60:40 split seatback while on Platinum the 50:50 split third row in seven-seat configuration can be folded with a button. Second and third-row seats are also designed to fold flat and there is underfloor storage in the boot. Additionally, all occupants now have places to store their things and in Trend, Sport and Platinum variants, are able to charge their devices with power outlets in all three rows.

Only Platinum and Sport get the new 3.0-litre V6 turbo-diesel, which is an option in the Sport and standard for the Platinum. Ford’s carry-over 2.0-litre bi-turbo diesel (previously producing 157kW and 500Nm) features in the Ambient, Trend and Sport as the standard drivetrain. Both engines use a 10-speed automatic transmission.

The Ford Everest is offered with RWD or a new four-wheel drive option; RWD is only available on Ambiente and Trend. The new 4×4 system is a permanent four-wheel drive drivetrain that uses an electronically controlled on-demand two-speed electromechanical transfer case (EMTC) with selectable drive modes. Braked towing capacity is 3500kg (when fitted with the optional factory Tow Pack) and all variants are equipped with trailer light check function and trailer connection checklist (and where available the lights can be checked with the FordPass app), as a well as a new Tow/Haul drive mode that improves gearshift response when towing. Space in the engine bay allows for a second battery to power aftermarket accessories.

“The 3.0L V6 turbo-diesel really delivers that big-engine torque and power customers want,” said Pritika Maharaj, Everest Program Manager. “It feels really tough in the sense that it’s got endless power and torque, but it is also refined and quiet on the road.” Wading depth is 800mm and a dedicated off-road screen displays vehicle information such as driveline and diff-lock indicators, steering angle and guides, and vehicle roll and pitch angles. Models equipped with 360-degree cameras can enable a front camera view of the track with predictive overlay guidelines. Everest also gets some ‘underbody protection’ and selectable off-road driving modes, a rear diff lock and two recovery hooks up front. The track has also been increased for this generation by 50mm and Ford claims this gives “more controlled ride on-road, while tweaks to damper settings allowed the team to inject more ‘fun’ and control into the way Everest rides both on- and off-road.” “Everest was always well regarded for its plush ride on- and off-road, but the track increase allowed our dynamics team to create a greater connection between vehicle and driver, with a more controlled ‘fun to drive’ ride around town and on the highway,” said Foston.

Ford Australia will also be offering a bunch of licensed ARB accessories to be fitted to Everest when buying new.

Safety has been increased with plenty of new assistance systems and design changes. A new centre airbag is positioned between the driver and front passenger, with far-side airbag and dual knee airbags bringing the number of airbags up to nine, including front driver and passenger, dual seat side thorax airbags and dual side curtain airbags which cover all three rows. New to Everest is Ford’s adaptive cruise control with lane centering. Adaptive cruise has active Stop & Go that can slow down Everest if traffic ahead has stopped or slowed. On top of this is speed sign recognition, lane-keeping assist with road-edge detection, evasive steer assist, reverse brake assist with pedestrian and cyclist detection, blind spot with trailer assist, and enhanced pre-collision assist.

Everest Platinum comes equipped with Active Park Assist which helps fit into tight spaces by controlling the steering, shifting, acceleration and braking to navigate into parallel or perpendicular parking spaces. It will also drive itself out of a parallel parking spot when required. Another Platinum exclusive is Matrix headlights with auto dynamic levelling and speed dependent lighting that can adjust the intensity of the beam in front of the vehicle depending on the vehicle’s speed. The headlamps also offer both static and dynamic turning control. Ford Australia is yet to detail exact specifications and pricing but will confirm details ahead of the model’s expected launch later this year.