We’ve waited a while for Toyota’s first full EV, the bZ4X, but it’s been worth it.

We’ve got high hopes for Toyota’s first electric car, after all the company has more experience of electrification than most with its hybrid Prius racking up a quarter of a century of sales. And finally, the first Toyota electric is almost in Australia. Due to arrive later this year – with pricing and specifications yet to be confirmed – we’ve taken the first production version for a drive in the UK where it’s already on sale.

Firstly, let’s deal with that name, if that’s what you can call it – it’s more like a serial number to us. Toyota is planning a family of bZs – it stands for Beyond Zero. The four refers to the size of the car (we should assume smaller 1, 2, 3 and a larger 5 model will follow), while the X means it’s a crossover. Actually, Toyota claims the bZ4X is more than just a crossover – it’s been co-developed with Subaru using its all-wheel drive knowhow, so in spite of it sitting lower than a Toyota RAV4, it’s apparently more of an off-roader than rivals.

And there are plenty of rivals these days – pick one from the Skoda Enyaq, Hyundai Ioniq 5, Kia EV6, Volkswagen ID.4 and new arrivals like the Nissan Ariya and Renault Megane E-Tech. It’s a tough market out there. Size-wise the bZ4X is a little bit longer and a little bit lower than a RAV4 and with more interior space. Sit in the back and you’ll be pleased by the amount of legroom you’ve got, if not the bum down/knees up seating position – an affliction many EVs have thanks to the batteries under the floor.

Similarly, the 412-litre boot offers decent space and a flat loading lip with space underneath for cables. But the rear seats don’t fold flat – there’s a gentle step up, again due to the batteries under the floor.

Those batteries sit structurally within Toyota’s new eTNGA platform, which debuts in the bZ4X. Their position makes the car stiffer and lowers the centre of gravity to help with handling.

And although there’s only one battery capacity of 71.4kWh, there are two power outputs depending on your choice of front- or all-wheel drive. Go for the two-wheel drive set-up and there’s 150kW and 266NM of torque, while motors over both axles up the power to 160kW and 337Nm. Toyota has worked hard on the efficiency of the batteries and electric motors to try and eek as much range as it can out of the smallest battery possible, so it claims up to 510km on the front-drive car and 460km if you’ve got the all-wheel drive, depending on spec. We drove the latter over mixed town, country, and motorway roads with an average of 5.5km/kWh giving a real-world range of over 386km – not far from our car’s claimed figure of 414km.

When it comes to fast-charging you can charge at speeds of up to 150kW to get an 80 per cent charge in 30 minutes. But overseas launch cars get a 6.6kW on-board charger and then a few months later cars will get 11kW charging – these details have not been confirmed for Australia. 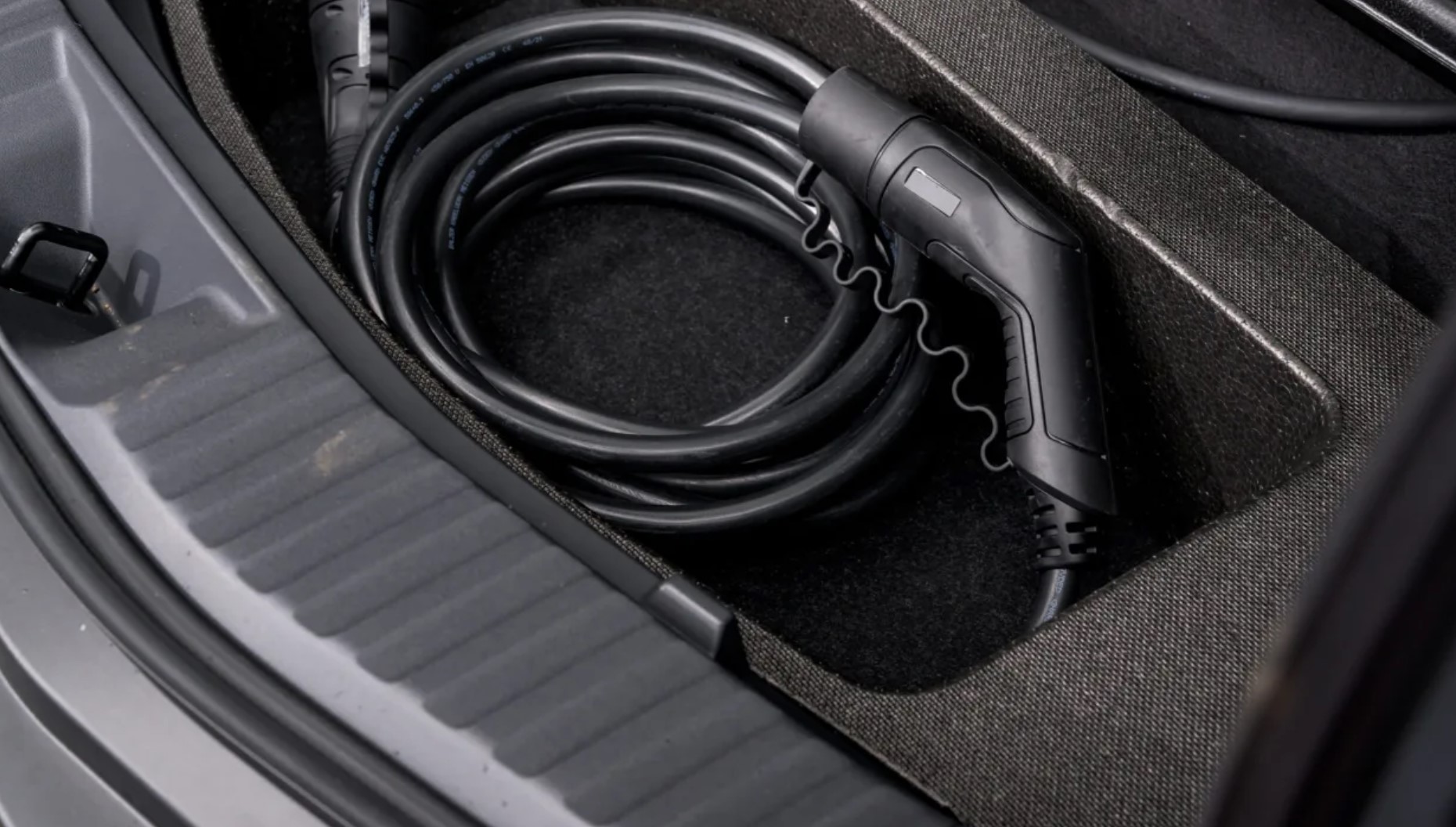 As well as a choice of front- or all-wheel drive, there are three equipment grades available overseas, called Pure, Motion and Vision – plus a limited Premier Edition. We don’t yet know which trim gets what, but Toyota doesn’t usually scrimp on equipment and all cars benefit from various levels of Toyota’s advanced T-mate safety systems.

It’s a smart looking car on the outside with a hint of 4×4 to it, plenty of sharp creases and slim LED lights front and rear. It’s clearly a Toyota, but the design is not massively different to other EVs out there. The rear is coupe-like and also features another current trend, a rear roof spoiler that’s split with two winglets either side. The aerodynamics are so efficient, apparently, that this is another model that doesn’t need a rear wiper; we suspect that might be a bit frustrating.

Also missing on the inside is a glovebox. Toyota has tried to slim down the dash to give a greater sense of space, which means the glovebox had to go. Clever use of space between the front seats is supposed to compensate, but that’s a trick rivals have pulled and still managed to include a glovebox. The dash layout is attractive, though, and it’s covered in a sustainable, ribbed material that brings a sense of warmth to the cabin. Other plastics feel a bit cheap, but it’s not a deal breaker – things are comfy and spacious, including the fake leather-covered front seats.

From the driver’s seat the instrument binnacle with its digital display is set high and quite a way away. That’s not a problem, but there is a hint of Peugeot’s iCockpit about it – set the steering wheel high and you’ll obscure the bottom of the display, raising your head to see over the wheel at what you might be missing. Like Peugeot, Toyota has fitted a small diameter wheel, which is lovely to hold and makes the car feel a bit sportier than it might otherwise.

To the right in our car was a wide 12-inch infotainment screen that is the best yet we’ve seen in a Toyota and as good as anything in rivals – lesser models are likely to get an eight-inch screen, but they all have the expected smartphone connectivity. Heating and ventilation controls are, thankfully, separate, while a rotary gear selector sits on the centre console underneath with various other driving controls. Behind that is a lidded home for your smartphone with wireless charging (a recipe for leaving your phone in the car in our book), a couple of cupholders and a lidded bin with sliding armrest for your elbow. There’s also a bit of storage underneath at the front, plus big door bins at the front and back.

It’s when the bZ4X turns a wheel, though, that it’s at its most impressive. Although the bare numbers don’t look hugely impressive – 0-100km/h in 7.5 seconds for the front-drive car and 6.9sec with all-wheel drive – the bZ4X feels quicker than that with an intoxicating kick of acceleration when you put your foot down at pretty much any speed. It’s accompanied by little more than the whoosh of air passing the handily large door mirrors. 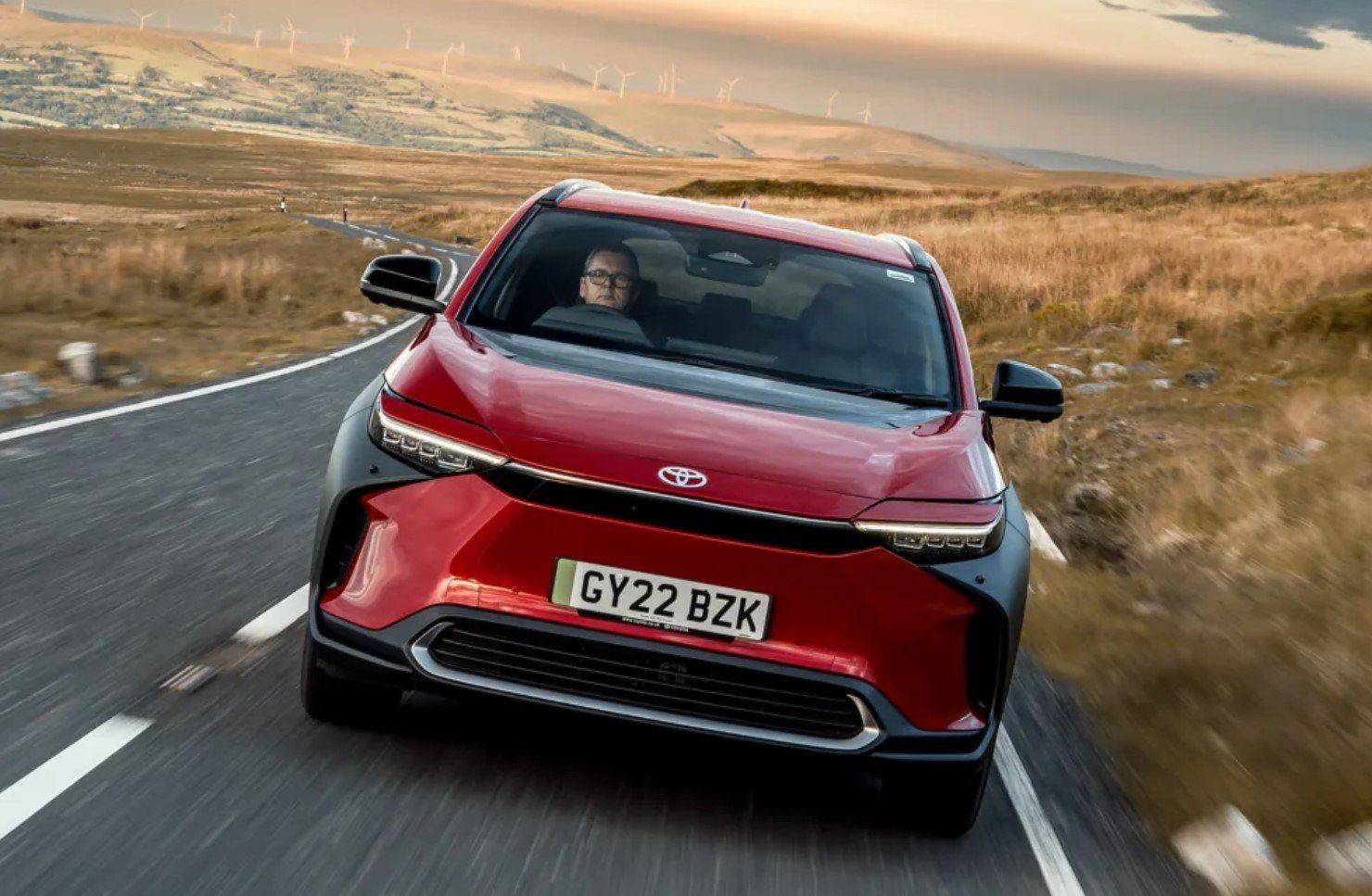 There’s also a dynamic edge, in keeping with Toyota’s new-found fun philosophy that’s filtered down from its GR models. The steering has a nice weight to it and feels reasonably direct, helped by the wheel’s small size. Next year you’ll be able to specify a drive-by-wire steering system with a butterfly-shaped yoke instead of a wheel.

McPherson struts at the front with trailing arm suspension at the back combine with the low centre of gravity to keep the car flat and stable through corners. Passengers might not notice how much fun the driver is having behind the wheel. Perhaps most impressive, though, is the ride. Even over some pretty broken roads, the bZ4X does its best to smooth things out. It can’t irradicate the worst bumps completely, but for a sizeable SUV weighed down with heavy batteries and riding on 20-inch wheels, the ride is remarkably unfussed.

Given the big wheels and tyres, road noise is minimal, too. On the motorway, there’s only the rush of wind around those mirrors to disturb the peace, although you’ll probably be enjoying the decent JBL sound system too much to notice. All-wheel drive cars come with X-MODE off-road settings and grip control to limit speeds up and down steep slopes. Our brief tests revealed more off-road ability than rivals, but we doubt too many drivers will take their bZ4X mud-plugging. They may pull a trailer, though, and the optional Towing Pack enables the car to pull up to 750kg.

Toyota’s first electric car is a good one. It may be no more of a head-turner than rival EV SUVs, but the way it drives will get people talking. It’s super-comfortable and has plenty of space inside, it’s well made and comes with plenty of tech. It’s not the cheapest electric SUV on the block, but with Toyota’s reputation for reliability and the prospect of ten year’s warranty cover if you have it cared for by Toyota, this is one of the most appealing new EVs you can buy.