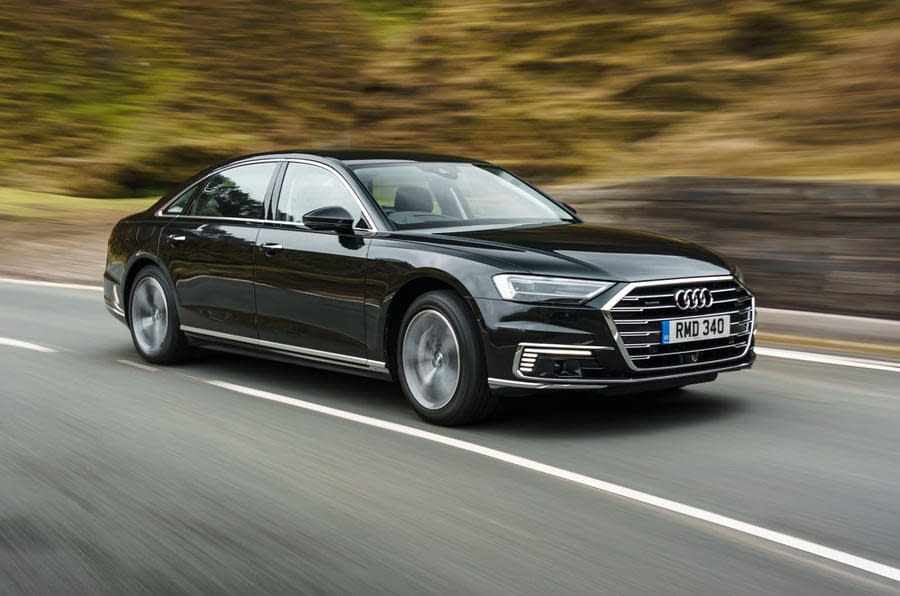 Even with its impressive frugality put to one side, the 60 TFSIe feels like much more of a luxury product than its diesel range-mate.

It might come as something of a surprise, but if we had to pick a car that best demonstrates the virtues of electrification, this might be it. And so more the pity that it hangs in limbo for Australia.

Why? Well, judged solely on what a luxury limousine needs to deliver, namely supreme refinement and smoothness for the passenger, and low-running costs and low emissions for the owner, the new A8 60 TFSIe is not just simply on a par with its petrol and diesel equivalents, it’s better.

But then again, it should be. Both BMW and Mercedes have had plug-in versions of their respective limos on sale for the past couple of years, giving the engineers at Ingolstadt both something to aim for and also the opportunity to make use of the newest hybrid tech on the market. 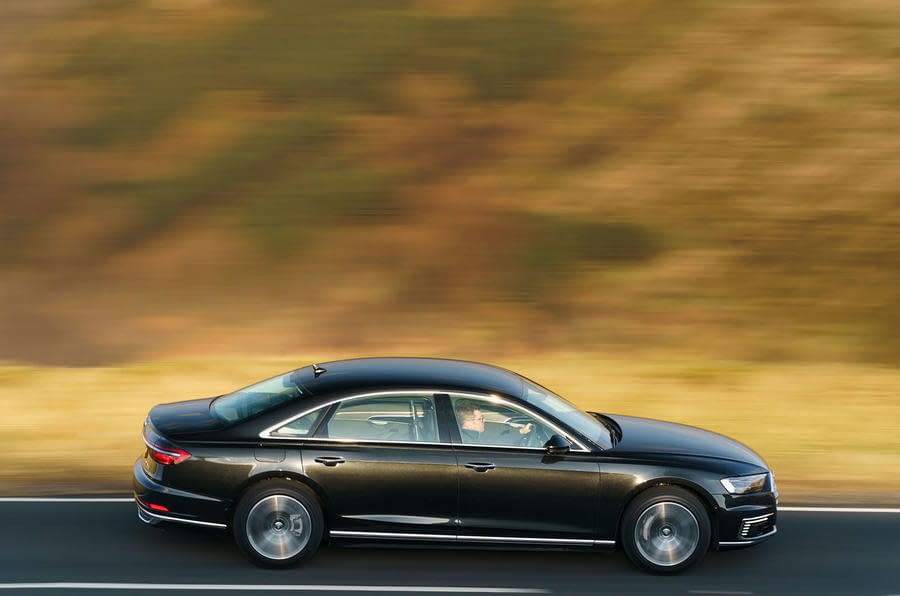 That tech includes a 94kW ‘permanently excited’ electric motor (like a Porsche Taycan) paired to a more conventional 250kW 3.0-litre turbocharged V6 petrol engine. The total combined output of 330kW is sent to all four wheels through an eight-speed automatic gearbox, resulting in some pretty punchy performance. 0-100km/h takes just 4.9 seconds (quicker than both the Mercedes S560e and BMW 745e) and given the run of a German autobahn we had it on, it will accelerate up to an electronically-limited 250km/h.

However, with most 60 TFSI e’s destined to spend their lives ferrying high flying execs around crowded city centres, we suspect an all-electric range of 46km (compared to 40 for the Merc and around 45 for the BMW) will be of more interest to buyers than outright performance. 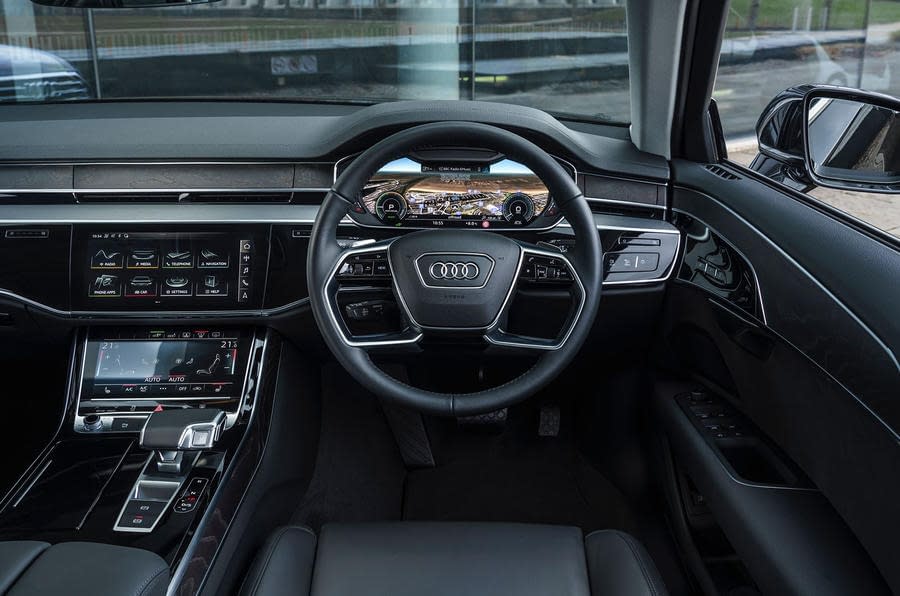 Indeed, with a fully charged battery, the plug-in A8 to all intents and purposes functions like a fully electric vehicle; Audi’s ‘permanently excited’ unit having enough poke for most situations. It’ll even accelerate up to 135km/h on battery power alone, making for a beautifully serene experience for passengers, with no engine noise or jerky gearchanges disturbing the relaxed ambiance.

When the V6 petrol engine does eventually kick-in, the transition from electric to petrol power is seamless to the point of being nearly undetectable. This, combined with a distinct lack of wind noise, makes the manner in which it accelerates somewhat deceptive, the 60 TFSIe gaining speed like an A380 at takeoff.

With all those batteries onboard, however, it shouldn’t come as a surprise that 60 TFSIe isn’t exactly a driver’s car: it wallows a little on its standard air suspension through bends, the steering is accurate but devoid of feel and the brakes can be a little inconsistent in their operation. Ultimately, this is a car that wants you to drive like a chauffeur. So much so in fact, that it’ll even give you lessons. 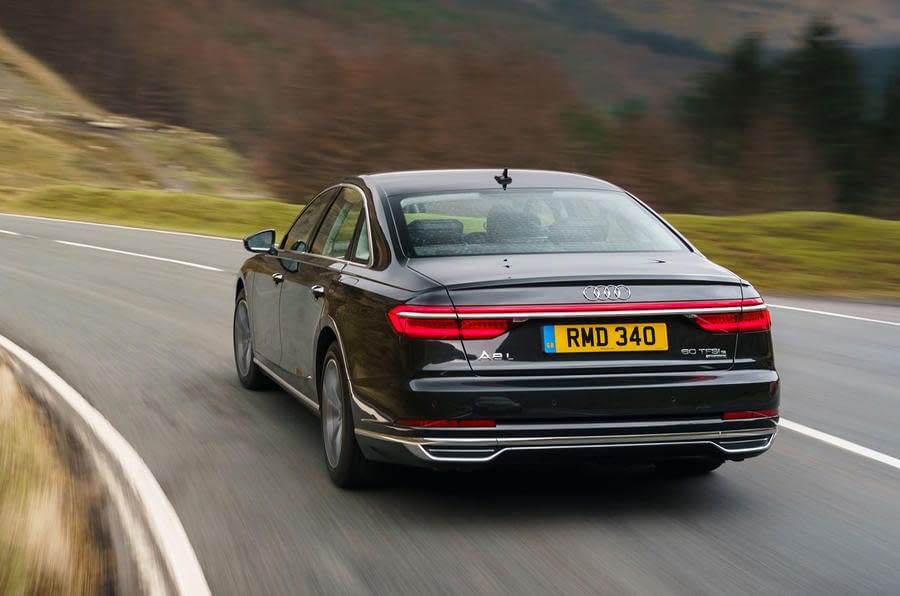 Working away behind the scenes, the 60 TFSIe uses predictive navigation data to help you manage the battery’s charge, so on a short journey you’ll get plenty of electrical assistance, while on a longer one you’ll get more help from the petrol engine. The accelerator pedal will even give your right foot a nudge when approaching a lower speed limit to remind you to lift off so you can put some juice back into the battery; the system being able to recover 25kW of energy from coasting and 80kW from the brakes.

It’s a cleverly calibrated system that not only helps improve range, but also forces you to be smoother, benefitting your passengers. And, of course, being an A8, your passengers should already be pretty relaxed thanks to the Audi’s plush interior and acres of legroom. 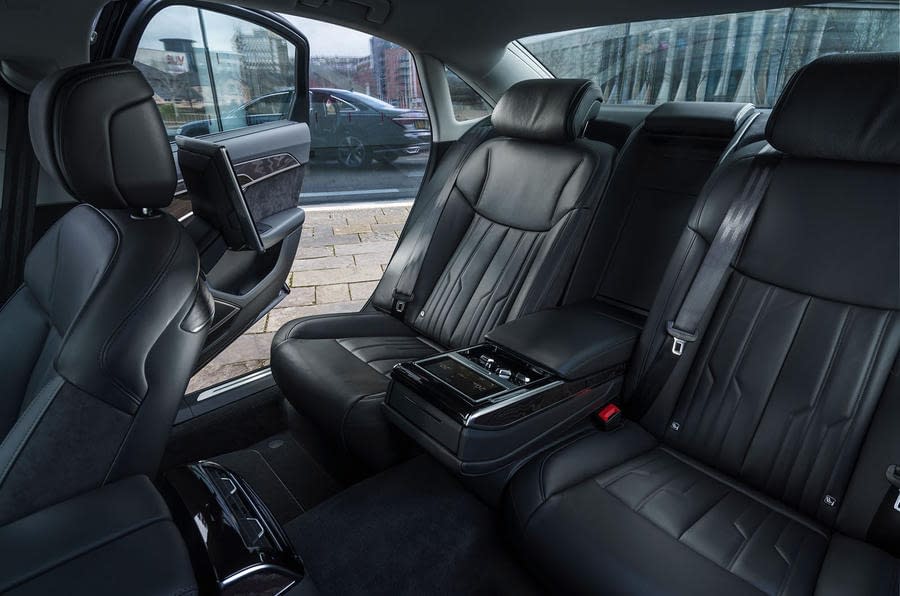 Well, it all depends on how you’re going to use your A8. If you cover big motorway miles, go for one of the diesels. You won’t reap the benefits of the electrified powertrain otherwise. However, if you spend a great deal of time in a city, then the 60 TFSIe is a true no brainer. Not only is it smoother than its diesel counterpart, it’s quieter than a pair of Bose noise cancelling headphones and impressively frugal – we saw over 2.4L/100km on our inner-city test route.

Plus, with a nearly 48km all-electric range and a CO2 rating of just 60g/km, the 60 TFSIe is not only congestion charge exempt, but it should also make for a relatively cheap company car, too. If those kinds of figures don’t demonstrate the virtues of electrification, we don’t know what will.