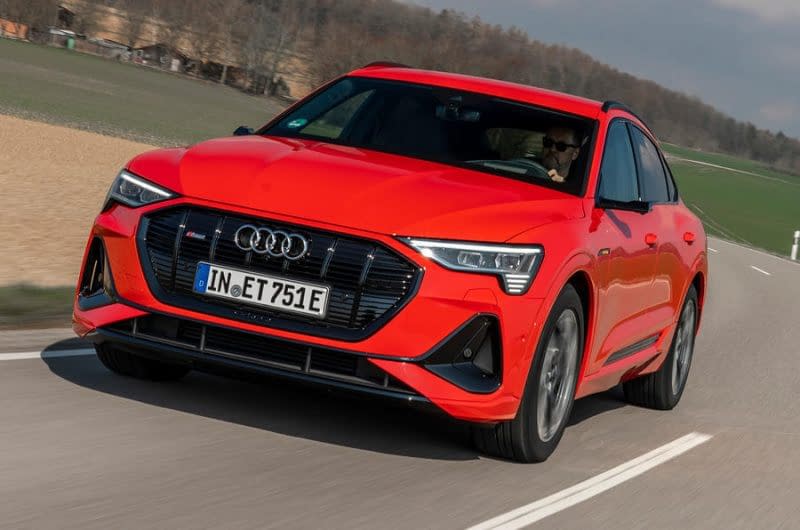 THIS IS the car with which Audi is aiming to challenge the Jaguar I-Pace for zero-emissions SUV driving honours.

The E-tron Sportback 55 quattro, as its name suggests, is a more sporting version of the
E-tron 55 quattro that has been on sale here since mid-2019. Outwardly, it’s distinguished from its sibling by a more heavily curved, coupé-like roofline and liftback-style tailgate, among other subtle changes, including more aggressively styled bumpers and headlights using Audi’s new digital matrix LED technology.

Together, these alterations provide the E-tron Sportback with a shapely profile similar in style and detailing to the Elaine concept that Audi unveiled three years ago.

Sharing certain exterior design elements with conventionally powered Audi models, it’s perhaps not as distinctive as the I-Pace. But with a drag coefficient of just 0.25Cd, it’s among the most aerodynamically efficient series-production SUVs yet, beating the Jaguar in this crucial area by a considerable 0.4Cd margin. This is thanks in part to the availability of ‘virtual exterior mirrors’, which use a camera to project a live video feed on the forward part of the doors inside. 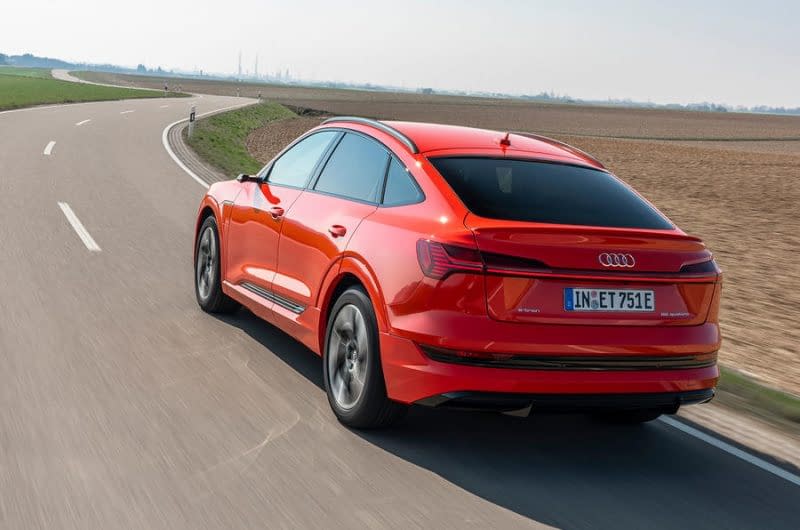 The changes to the cabin over the regular E-tron are slight, but that’s no bad thing. In terms of attractiveness, perceived quality and tactility, the dashboard, controls and trim materials are all premium in nature. The optional front sports seats are firm and supportive, setting up a pleasantly roomy and airy driving environment. However, accommodation in the rear is compromised to the tune of 20mm by that plunging roofline.

The adoption of a more heavily angled tailgate also reduces boot capacity by 45 litres over the E-tron, at 615 litres. Even so, it’s still quite versatile, with 58 litres more than the I-Pace. 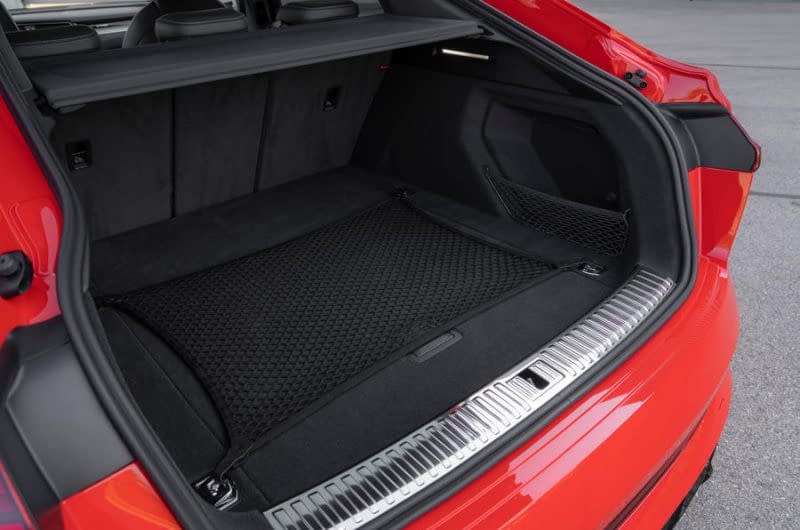 Like the E-tron (alongside which it’s produced at Audi’s factory in Brussels, Belgium), the E-tron Sportback is based on a modified version of the MLB Evo platform, housing between its axles a sizeable 95kWh lithium ion battery made up of cells supplied by LG Chem. 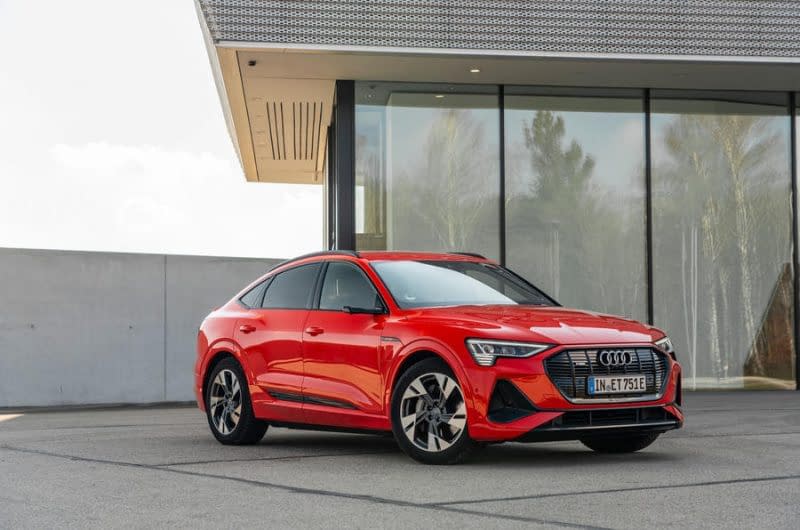 The drivetrain is borrowed wholly from the E-tron. It uses two differently specified asynchronous electric motors, one sitting up front that produces peaks of 135kW and 250Nm and a second at the rear making 165kW and 315Nm.

Together, they provide a maximum system output of 300kW and 660Nm for limited periods of up to eight seconds in Boost mode, which is activated by slotting the gear selector into S. In D, the combined output of the motors is reduced to a milder 265kW and 560Nm to help increase efficiency and consequently extend the range between charges. The I-Pace’s two motors, by way of comparison, deliver a maximum combined 294kW and 695Nm.

Power is sent to all four wheels via a single-speed gearbox attached to each motor and networked via a central power electrics system. In a key departure from its more practical sister, however, the E-tron Sportback features a decoupling mechanism between its front and rear axles.

This enables it to send its drive exclusively to the rear wheels in everyday driving in D, giving it an additional seven miles of range over the E-tron, at 450km. It’s only when you call up greater reserves via the kickdown function in S that the other motor is called upon and the front wheels begin to do the driving.

Acceleration off the line is strong but far from explosive in D, owing in part to the E-tron Sportback’s hefty 2480kg kerb weight and the considerable amount of energy required to set it into motion. Once you’ve built up initial momentum, though, rolling acceleration is quite sharp. Keep the throttle nailed thereafter and the car will dispatch you beyond the British motorway speed limit with a good deal of force.

Selecting S instantly heightens the performance further, providing more responsive tip-in, noticeably stronger roll-on qualities and greater overall performance intensity. So configured, the car has a claimed 0-100km/h time of 5.7sec, but from recent experience with the E-tron, we wouldn’t be surprised if that time is a little on the conservative side.

The E-tron Sportback certainly feels quicker once all that torque is flowing freely to each wheel, and the inherent urgency doesn’t subside until you’re well on the way to the electronically limited top speed of 200km/h. For perspective, Jaguar claims figures of 4.8sec and 200km/h.

Satisfaction doesn’t only come via the accelerative forces at play, though. An advanced kinetic energy recuperation system with three selectable degrees of intensity (in addition to an automatic setting that draws on the sat-nav for topographic information) also demands a degree of skill from the driver, in seeing how much energy can be harvested under braking and during periods of off-throttle coasting. 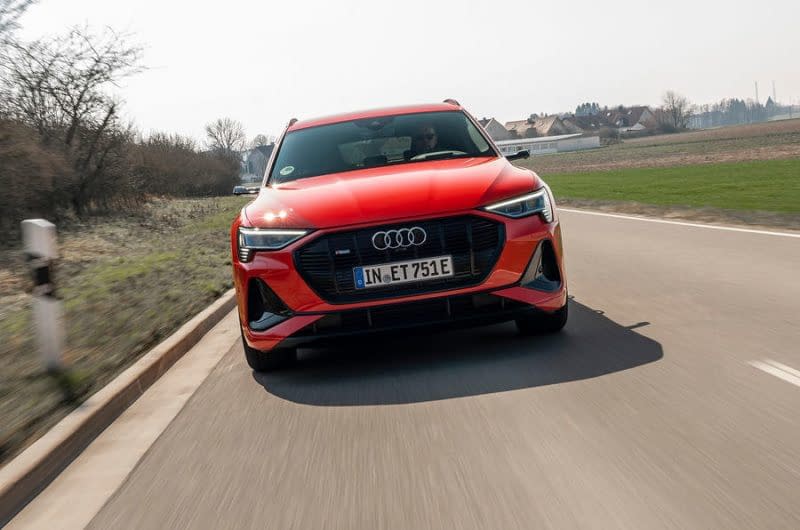 In its automatic setting, the system is amazingly efficient, although it does take some trial and error before you fully understand what setting best suits any particular situation.

Another real strong point of the E-tron Sportback is its outstanding refinement. We’ve become used to the inherent quietness of electric cars, but Audi has managed to take acoustic civility to a whole new level. Rolling refinement, suppression of road noise and resistance to wind buffeting are particularly good, even at motorway speeds. The near-silent operation of the motors and power electrics system is excellently isolated from the cabin too, making the E-tron Sportback very relaxing to drive over long distances, especially in its more comfort-focused mode.

Given the E-tron Sportback’s outstanding ability to place those not-inconsiderable reserves to the road, it’s a pity that its steering doesn’t offer more feel; the speed-sensitive electromechanical rack delivers a reassuring sense of sharpness and weighting but is lacking in feedback.

Don’t let that shortcoming put you off, though, because the E-tron Sportback still offers enough for the driver to be described as engaging. It’s capable of stringing together a series of medium-to-high-speed corners with excellent resistance to roll and some proper rear-biased handling properties.

With the majority of its weight concentrated low within its platform and a comparatively low ride height by SUV standards, it has a very low centre of gravity and can offer the sort of assured handling traits that promise to win it wide appeal.

Despite heady levels of weight transfer under braking and in tight corners, body movement is excellently suppressed thanks to a combination of firm damping and fast-acting qualities of the standard air suspension. Lean isn’t entirely absent, but the degree of it is relatively low and sufficiently progressive so as not to upset the otherwise respectable balance.

The ability of the quattro four-wheel drive system and its torque-vectoring system to individually apportion power to each rear wheel helps to provide a decent amount of purchase on smooth surfaces, too.

The optional 255/50-profile tyres worn by our test car deliver plenty of mid-corner grip, allowing you to carry a good deal of speed up to the apex without any premature understeer or intervention from the electronic stability control system. Thereafter, you can be very prodigious with the throttle without causing any deterioration of poise.

In the UK, the E-tron Sportback comes as standard on big 21in alloys, but buyers will also be able to specify 22in wheels as an option. On the 20in rims available in Germany, the ride is nicely struck, with firm underlying qualities providing well-controlled vertical movement.

A further point of note is the outstanding feel of the E-tron Sportback’s brake pedal, which is among the best we’ve come across in an electric car of any guise. Despite there being four different intensities of energy recuperation available, the feel remains strong and positive at all times. Changes over the regular E-tron to the brake pads, including the adoption of softer springs, have reduced friction, Audi says, eking out another 2.5km of range.

The E-tron Sportback is more driver-orientated than the E-tron, if not quite to the degree we were led to believe by Audi when revealing it at the Los Angeles motor show last year. The difference between the two is quite subtle on pure performance alone.

However, with a more sporting shape, greater athleticism on more challenging roads, further improved refinement and a superb interior that continues to offer a good deal of everyday versatility, even despite the coupé redesign, the E-tron Sportback sets a high standard among the electric SUV ranks.

It’s certainly one the I-Pace won’t have an easy time surpassing when we get to put the two side-by-side.