As Audi bids to score the first electrified win in the Dakar Rally’s history, we explore how its car has been developed, tested and refined over the last year.

If there’s a checklist of iconic motorsport achievements in Audi’s HQ, pretty much every major accolade has been ticked off.

Driven by its ethos of ‘Vorsprung durch Technik’ (or ‘progress through technology’), Audi has developed a stellar 40-year reputation for using motorsport to change the game – bringing innovations to racing and rallying that have turned conventional thinking on its head, then honing them to stunning effect on-stage and on-track, before using the knowledge gained to make ever-better road cars.

Now, with its pioneering Audi RS Q e-tron set to take on the world’s toughest off-road endurance event – the Dakar Rally – Audi is aiming to cross another achievement off the motorsport ‘to-do’ list and make history once again. We examine the behind-the-scenes story of this innovative electrified rally racer.

Success for Walter Rohrl on the famed Pikes Peak hillclimb in 1987 – followed by wins for the Audi 90 quattro GTO in the 1989 IMSA series, for the Audi V8 quattro in the German DTM and the Audi A4 quattro in the 1996 British Touring Car Championship – only cemented quattro’s reputation.

Audi then used the gruelling Le Mans 24 Hours to hone a series of innovations – from TDI diesel, through Matrix LED headlights, to hybrid power – scoring 13 wins from 18 races. Using electric motors to power the front wheels and a compact V6 to power the rear wheels, the Le Mans-winning Audi R18 e-tron quattro was a model of efficiency, securing three wins and accelerating Audi’s move towards electrification.

That move was cemented as Audi took a spearhead role in the development of the all-electric Formula E single-seater series, with driver Lucas di Grassi becoming one of the series’ most successful drivers with 12 wins, 33 podium finishes and the 2017 driver’s title. Pioneering electric power on the Dakar Rally is the obvious next step. 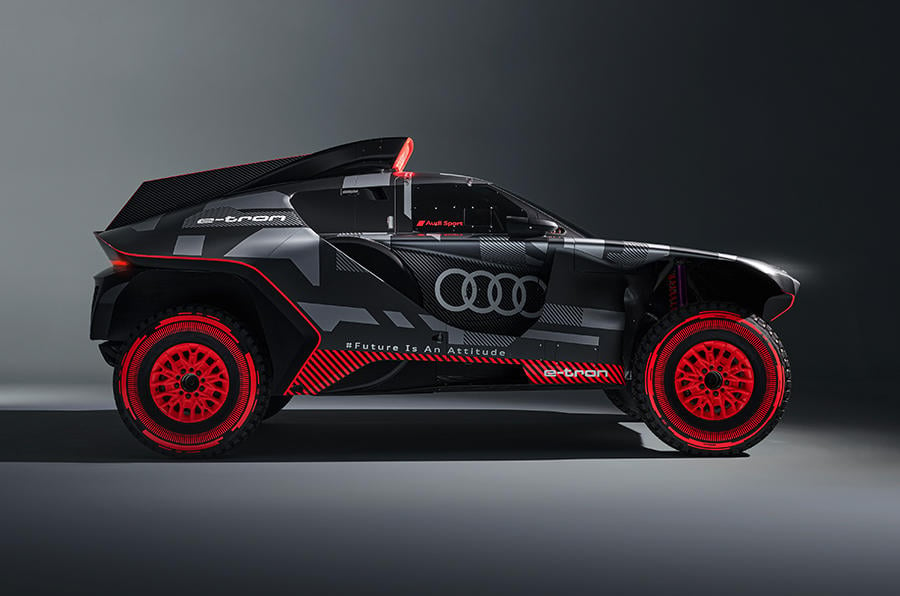 Alongside a return to the Le Mans 24 Hours in 2023, Audi announces its debut in the gruelling Dakar Rally with a pioneering electrified drivetrain. “A multi-faceted motorsport commitment is integral to Audi’s strategy,” says Audi CEO Markus Duesmann. “We want to continue demonstrating Audi’s slogan ‘Vorsprung durch Technik’ in top-level international motorsport. Electromobility is no longer a dream, but the future. This is why we’re taking the next step in electrified motorsport by facing the most extreme conditions. The Dakar Rally – the toughest rally in the world – is the perfect stage and test laboratory for us in this respect.”

Audi confirms a collaboration with off-road specialist Q Motorsport for its Dakar Rally programme. “A good partner is crucial for success in motorsport,” says Julius Seebach, Managing Director of Audi Sport GmbH. “By working with Q Motorsport we’re sticking to a philosophy that has proven itself at Audi over many years. In Q Motorsport, we’ve gained an experienced partner with proven Dakar expertise.”

Founded by renowned Dakar Rally specialist Sven Quandt, Q Motorsport brings a wealth of off-road racing expertise to the table. “We wanted to break new ground in cross-country motorsport,” says Sven. “The world is changing, and the Dakar Rally must prove it can be sustainable and point the way forward. This is exactly what we want to demonstrate with Audi – to prove what is possible with this technology.” “All-wheel-drive quattro was a gamechanger for the World Rally Championship,” says Audi Sport project manager Andreas Roos. “Audi was the first brand to win the Le Mans 24 Hours with an electrified drivetrain. Now, we want to usher in a new era at the Dakar Rally, furthering development on our e-tron technology under extreme the most extreme conditions. This is the ultimate challenge for an electric drivetrain.”

May 2021: the driving team comes together

Audi reveals the three hugely experienced driving crews that will spearhead its Dakar Rally assault. “In the Dakar Rally, teamwork and reliability are crucial,” says Q Motorsport’s Sven Quandt. “You need a well-bonded team, a super-reliable car and reliable drivers. You can’t permanently drive at the limit. The right strategy is crucial.”

First, ‘Mr Dakar’: veteran Frenchman Stephane Peterhansel, who has won the Dakar Rally six times on a motorbike and eight times in a car. Alongside him, co-driver Edouard Boulanger, with an enviable reputation as driver and co-driver.

Next, Carlos Sainz: a World Rally Championship icon thanks to his three titles. Since shifting focus to the Dakar Rally, the Spaniard has won the blue riband event three times alongside co-driver Lucas Cruz. Finally, Mattias Ekstrom: a relative newcomer to the Dakar Rally, but an Audi veteran – boasting two German DTM titles and a wealth of loose-surface success from Audi’s World Rallycross programme. Alongside him will be experienced co-driver and fellow Swede Emil Bergkvist.

“It’s no exaggeration to speak of a dream team,” says Julius Seebach, Managing Director of Audi Sport GmbH. “Stephane is the most successful Dakar driver of all time. Carlos is a multiple Dakar winner and World Rally champion. With Mattias, we’ve celebrated many successes. He’s one of the world’s most versatile drivers. In addition to speed, they add expertise and motivation to our team. The same go for their co-drivers, who play an increasingly important role in the Dakar Rally.” The Audi RS Q e-tron is revealed to the world at Audi Sport’s HQ in Neuburg, Germany. The team prepares for a comprehensive test schedule that will push every element of the car’s innovative powertrain to the limit in the quest for the ultimate levels of endurance and reliability that are key to success on the Dakar Rally.

“You can have the fastest car, the fastest drivers, but you won’t be able to win if you don’t have reliability,” says Q Motorsport’s Sven Quandt. “Without reliability you’re nowhere. Before you can finish first; first you have to finish. Forget the rest. If we finish our first Dakar Rally, that’s already a success. The rest is a nice present.”

Initial loose-surface testing of the Audi RS Q e-tron takes place in Magdeburg, Germany. Mattias Ekstrom is one of the first of Audi’s drivers to take the wheel. “My first impression was that the car looks so big,” he says. “But, behind the wheel, it was a big surprise. When I saw the size of the car, I thought it would feel lazy – rolling and pitching a lot. But it’s the complete opposite. It feels more like a go-kart. With quattro all-wheel-drive and the artificial centre differential, it has so much traction.” The Audi RS Q e-tron heads to Spain for its first major off-road test: an eight-day endurance run, covering more than 1700km on 17km-long rough gravel roads near the Spanish city of Zaragoza. With temperatures of up to 34C in the shade, this is a crucial yardstick for the cooling of the powertrain’s electrical components.

“Being able to call on the battery’s maximum performance is all about optimum temperature management,” explains Andreas. “This is what we’re learning with every test, and that’s exactly why we are going to the desert with an electrified drivetrain. Each component requires a dedicated cooling system. That means we have six – including the intercooler and the air conditioning for the driver and co-driver. We’re gaining an incredible amount of experience that we’re sharing with our colleagues from the e-tron road car development team.”

All three of Audi’s driving teams are present, but Carlos Sainz best sums up the mood. “For my first drive in proper conditions I’m really happy with how the car behaves already,” he says. “I had a really good feeling straight away. Of course, there’s fine-tuning to be done. But the starting point is good.”

September 2021: taking to the sand in Morocco

Audi’s Dakar Rally team head to the dunes of Morocco, where temperatures climb over 40C and sandstorms add to the challenge of the desert landscape. “We actually expect much lower temperatures at the Dakar Rally,” says Andreas Roos. “But we deliberately went to Morocco to test under the most extreme conditions. Components such as the MGU weren’t developed for use in such high ambient temperatures, while the drivetrain and other elements were also pushed to their limits by the heat.

“We also made modifications so the driver and co-driver have more space in the tight cockpit and can communicate better with each other. This was one of the many topics we had on our to-do list after the test in Zaragoza. The insights we gained in Morocco are invaluable, but they also show us that we still have a lot to do before the Dakar Rally, and there is not much time left.”

With less than 100 days to go until the start of the Dakar Rally on January 2nd, development work continues off-track in Audi’s climate chamber to simulate high temperatures and elevation differences, while learnings from testing are incorporated into the build of the Audi RS Q e-tron cars that will travel to the Dakar Rally itself.

“We’ve learned a lot in the tests we’ve run so far. Now we’re trying to feed all of our findings into the rally cars in time for the Dakar Rally,” says Andreas. “This project’s schedule has been extremely challenging. Less than 12 months have passed since the project officially started. We had to begin the development while the regulations for alternatively powered Dakar Rally vehicles had not yet been finalised. Plus, all our development took place during the Coronavirus pandemic. You mustn’t underestimate that, either. What the team has achieved so far is unique.”

November 2021: heating up testing in Morocco

The Audi RS Q e-tron team head back to the deserts of Morocco, running more than 2500km and pushing the electric drivetrain’s motors, batteries and cooling systems to the very limit of heat and endurance. They pass each and every test with flying colours, with only punctures, bent wishbones and bodywork repairs – all natural hazards of competing in rough desert conditions – slowing the pace of development.
Article continues below advertisement
Back to top

After an intensive 12-month development programme, the Audi RS Q e-tron is finally ready for battle in the white-hot crucible of the Dakar Rally. For engineers and drivers who revel under the pressures of high speeds and intense competition, the epic adventure of the Dakar Rally lets them explore new horizons – both in terms of the backdrop of the landscape they’re competing in, and the progress of technology.

“On the Dakar Rally, we travel to fascinating places that you would never see otherwise,” says 14-times Dakar winner Stephane Peterhansel. “As racers, it’s by no means just about speed. The landscape posing unique challenges of its own is at least equally important. The Dakar is one of the last adventures in this world, and it’s on the verge of a radical change: the future is electric. In 10 years’ time, everyone will be driving electric cars, and the Dakar is an extreme test for this technology.

As potentially the most ‘petrol-experienced’ competitor in Audi’s line-up, three-times World Rally champion Sainz is also looking forward to seeing what the future holds. “Even at 59, I’m still hungry, otherwise I wouldn’t have taken on this new challenge,” he says. “The Audi quattro changed the World Rally Championship forever. Now we’re trying something different in the Dakar Rally. It’s a fantastic, extreme project – the ultimate challenge for an electric powertrain.”