The all-electric BMW i4 comes with 250kW and rear-wheel-drive, or with 406kW and all-wheel drive in powerful M50 guise.

This is the new BMW i4: a four-door, all-electric gran coupé that’s similar in size to the 3 Series. It’s gunning directly for the Tesla Model 3, and will be on Australian roads soon enough.

We have already driven and reviewed the prototype.

The new EV uses BMW’s CLAR modular cluster architecture – which also sits beneath the current 3 Series and a number of other models, right up to the X7 SUV. The i4 measures 4,785mm, has a 470-litre boot and integrates a super-slim lithium-ion battery beneath the floor of the passenger cell with a usable capacity of 81kWh.

There are two models at launch, with the eDrive40 version featuring BMW’s trademark rear-wheel-drive layout, while the high-performance M50 has a rear-biased xDrive four-wheel-drive set-up.

The eDrive40’s rear-mounted electric motor is rated at 250kW, and 0-100kmh in 5.7 seconds is claimed, while top speed stands at 190kmh. Perhaps more importantly, the car’s WLTP-tested range is an impressive 590km. 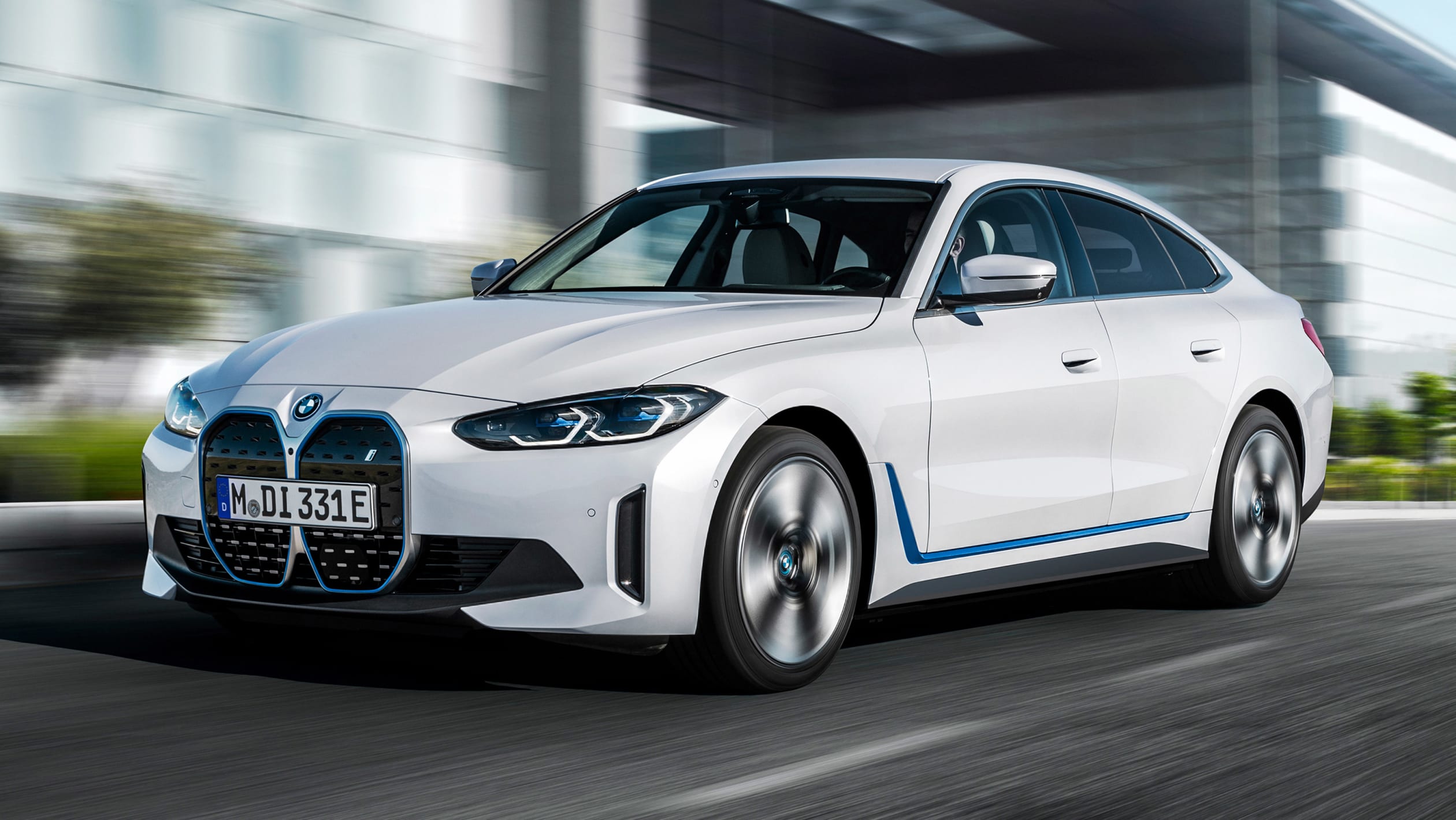 The more powerful M50 variant, which is in M Sport trim by default has a second electric motor up on the front axle for a total power output of 406kW. This means the 0-100kmh time drops to 3.9 seconds and there’s a 225kmh top speed. Range decreases to a claimed 508km. Both vehicles have a maximum recharging rate of 200kW, so the battery can be replenished from 10-80 per cent in as little as 31 minutes.

BMW executives have hinted that the line-up could be expanded to include smaller battery variants, with lower ranges but cheaper starting prices.

However, the i4 hasn’t been a project that’s focused entirely on range targets and charging tech; BMW has tried to make this a car with as much driving appeal from behind the wheel as a 3 Series or 5 Series. As the brand puts it, it’s all about “encompassing the full performance repertoire, not just acceleration in a straight line”.

Key to this are unique suspension set-ups for both i4 variants. Rear air suspension is fitted as standard, while the M50 adds adaptive M dampers. Both versions of the i4 receive a new dynamic stability control system that acts up to 10 times faster than a conventional set-up.

BMW claims that the rigidity of the i4’s chassis and the weight distribution (plus a wider track than the 3 Series, front and rear) are integrated with sharp steering for a strong all-round driving experience that’s both engaging in corners and capable of delivering excellent long-distance cruising comfort. Further features include launch control, while the new traction control set-up allows for the execution of controlled drifts. It can be switched off entirely, too. The sleek shape of the i4 results in a drag coefficient of 0.24Cd, and active aerodynamic elements are a part of the package. At the front, the large, 4 Series-inspired kidney grille features flaps at the bottom that open and close. These are adjustable in 10 stages, ranging from completely closed for pure aerodynamic efficiency, to wide open to allow cooling for the battery, brakes and electrical system.

We’ve known about the i4’s exterior design for a while now, because it was previewed by the near production-ready Concept i4 in March 2020. However, the full reveal of the car gives us our first look at the interior, which has an all-new iDrive system. Weber joined BMW in 2011 and has been responsible for luxury vehicles, including Rolls-Royce. He started his current role on the BMW board in July 2020

Q: The i4 is described as being an electric BMW at the heart of the brand. Do you expect sales to come from 3 Series owners or from new customers?

A: “The i4 is really essential for us. The core is around the 3 Series and 4 Series, so for us the i4 will attract 3 Series customers who are looking for a powerful EV with sufficient electric range. But the car is also attractive because its loading capabilities and space inside will attract potential 5 Series customers, too.”

A: “What is essential at this point for us is with the i4 and the iX we are attracting BMW customers in high-volume segments. The i3 and the i8 were low-volume approaches to electrification. This is high-volume production and we are expanding our fleet of vehicles.”

Q: Is there scope within the i4 line-up for a version with a smaller battery, shorter range and lower price?

A: “By the year 2024 we will have a BEV in every one of our big-selling segments. What you’ll also see is that the i4 has different battery choices. This is not so different from the product line-up you see on conventional vehicles. There will be an entry high-voltage battery that lowers the price point, and we have a larger high-voltage battery that is for the larger models.

“You will see that smaller vehicles with the biggest batteries will always have a price that comes close to the next segment. It is clear to us in every segment we will have a lower end with a smaller electric range and a higher end, because this is the biggest difference in price. The battery is the number-one cost element, so you have to scale correctly.”