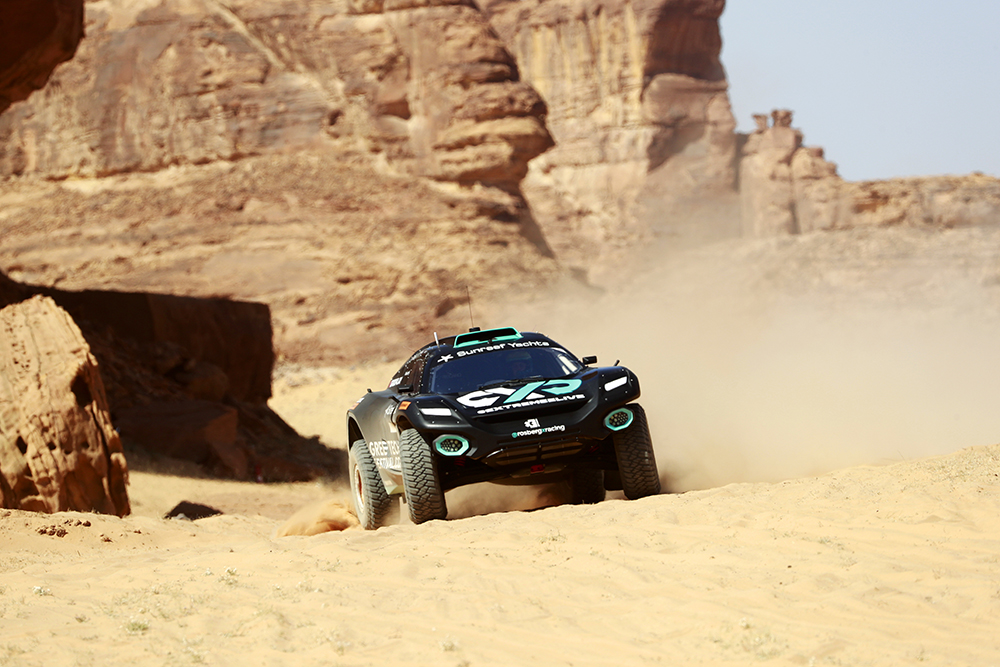 Extreme E burst into life with an action-packed weekend in the Saudi Arabian desert as Nico Rosberg got one over his old Formula 1 team-mate Lewis Hamilton thanks to his RXR team’s dominant victory in the hands of Johan Kristoffersson and Molly Taylor. There were some bumps along the way through the stunning landscapes of the Al’Ula region, but overall the new electric-powered off-road series’ debut should be hailed a raging success.

“How funny was that? It was Hamilton vs Rosberg out there all day,” said Rosberg after his team topped qualifying on Saturday, only to be dropped to third by a penalty for speeding in the so-called ‘switch zone’ where each team’s male and female drivers swapped places. But the setback didn’t stop RXR from claiming a comfortable win in the semi-final on Sunday morning, as three-time World Rallycross champion Kristoffersson got the better of rally legends Sébastien Loeb and Carlos Sainz Sr at the start. Loeb and his Hamilton X44 team-mate Cristina Gutiérrez saw off Sainz and Laia Sanz to join the Rosberg crew in the X Final.

Andretti United pairing Timmy Hansen and Britain’s Catie Munnings joined them after winning the second semi, known as the ‘Crazy Race’. Munnings, 23, had impressed on Saturday by completing her qualifying lap with a puncture, and drove a strong lap in the X Prix final by making up time on experienced Australian rally champion Taylor. Loeb and Gutiérrez struggled home third with a power steering problem – not the first on the Odyssey 21 in its first weekend of competition. Throwing up a dust storm

This was always going to be a learning experience for everyone involved in Extreme E, especially as teams had such a limited amount of pre-season testing. Owner/driver Jenson Button and his JBXE squad were always on the backfoot after only getting their hands on the Odyssey for the first time last Tuesday. A range of problems for the nine teams included hot batteries, damper and steering trouble, while safety concerns on the desert course accumulated in a decision to reduce maximum power of the twin-motor SUV from 400kW to 225kW from Saturday afternoon.

Dust was the main concern, which you’d think might have been predictable in a desert. The lack of visibility for following drivers led to a late change of race format, introducing one-at-a-time qualifying and just three instead of four cars starting each race. The format changes won’t necessarily remain for future rounds, but took little away from the spectacle. Abt Cupra, Ganassi and Veloce in the wars

Pity poor Claudia Hurtgen in Abt Cupra’s entry. The 49-year-old veteran barrel-rolled out of qualifying after hitting a bump at the wrong angle, then was rear-ended in the dust by Chip Ganassi Racing’s Kyle LeDuc in the shoot-out race on Sunday. LeDuc had also crashed on his own during the Friday shakedown.

The British Veloce team was also out of luck. Stephane Sarrazin rolled his Odyssey on Saturday, landing on his car’s antennae which dinged the roll-cage and made it a write-off. The team was forced to withdraw, meaning W Series champion Jamie Chadwick travelled all the way to Saudi to complete just a single lap of the 8.85-kilometre desert course.