There might not have been packed stadiums and cheering crowds, but the world watched as F1’s return to 2020 was as entertaining as it has been in a while.

The Formula 1 season-opening Austrian Grand Prix of a few weeks ago was packed with drama and entertainment, featuring collisions, spins, penalties, safety car periods and more mechanical retirements in one afternoon than we had seen for a long while.

Mercedes-AMG’s Valtteri Bottas upstaged world champion team-mate Lewis Hamilton, Charles Leclerc hustled an uncompetitive Ferrari to second and McLaren’s 20-year-old British charge Lando Norris snatched a dramatic maiden podium. It was the sort of race that would thrill fans – except there weren’t any in the stands at the Red Bull Ring.

Instead, coronavirus-induced safety measures meant the race was the first-ever grand prix held without a crowd, effectively running as a made-for-TV event. It created a slightly surreal atmosphere for those few at the track. Inevitably, it lacked the usual buzz of a grand prix; it felt more like a test session.

As with Silverstone, much of the character of the Red Bull Ring comes from its fans. Usually, the campsites around the bucolic venue are packed, the bars are busy and the mobile discos pump out 1980s dance sounds until the early hours. Over the past few years, there has been a Dutch invasion, with Red Bull driver Max Verstappen’s countrymen choosing Austria as one of their favourite stops and ensuring the grandstands that run along the straight after Turn One are a sea of orange. All of that was missing this year. 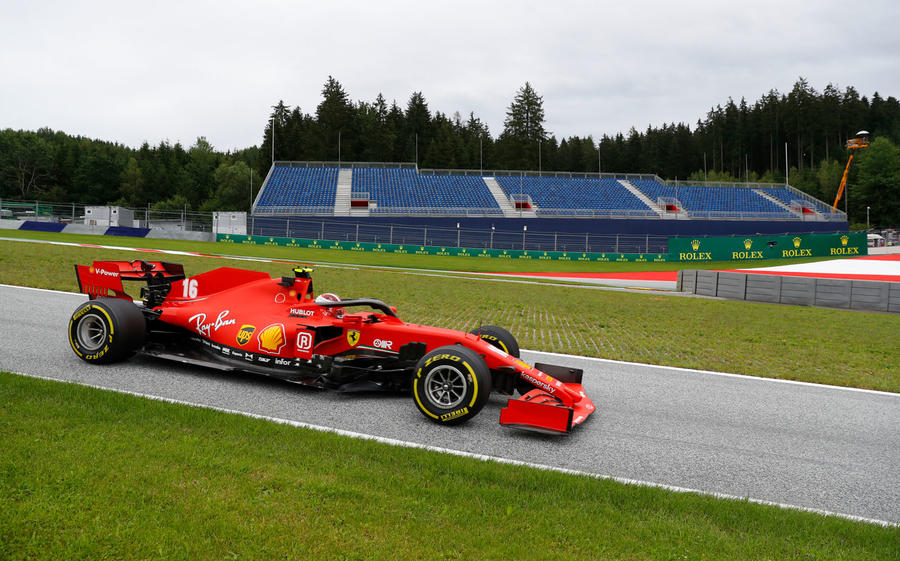 “It was very strange,” said runner-up Leclerc, who has quickly grown used to the attention of the tifosi. “We are lacking the passion of the fans, which is why I love the sport so much, to see the passion of people that are watching you. I actually looked in the grandstands during the race. I miss that.”

However, on the track it was business as usual for the drivers and, as a TV spectacle, the race couldn’t be faulted. “I think the world needs some activity,” said Jean Todt, president of the FIA, motorsport’s governing body. “Everybody was looking for something to come. That’s why I’m so grateful to all those who are contributing to this achievement. Clearly, you had to be brave. I would say honestly the easiest solution would have been to wait until it was much easier.”

So how did F1 finally manage to kick-start its disrupted 2020 season with a race that was originally scheduled to be the 11th round of the championship?

It was the result of months of diligent work by the FIA, the F1 organisation, the sport’s 10 teams and the Austrian Grand Prix organisers. Nothing was left to chance, and that preparation set an example for other upcoming races to follow.

There are sound reasons why Austria made sense as a starting point, and the track’s name is the first clue. The owners of the Red Bull Ring see the venue as a marketing tool, and it runs to a different business model than many other venues, so the lack of paying fans was not an issue. Naturally, there was also a great impetus within the Salzburg-based company to see its two teams, Red Bull and AlphaTauri, back in action. 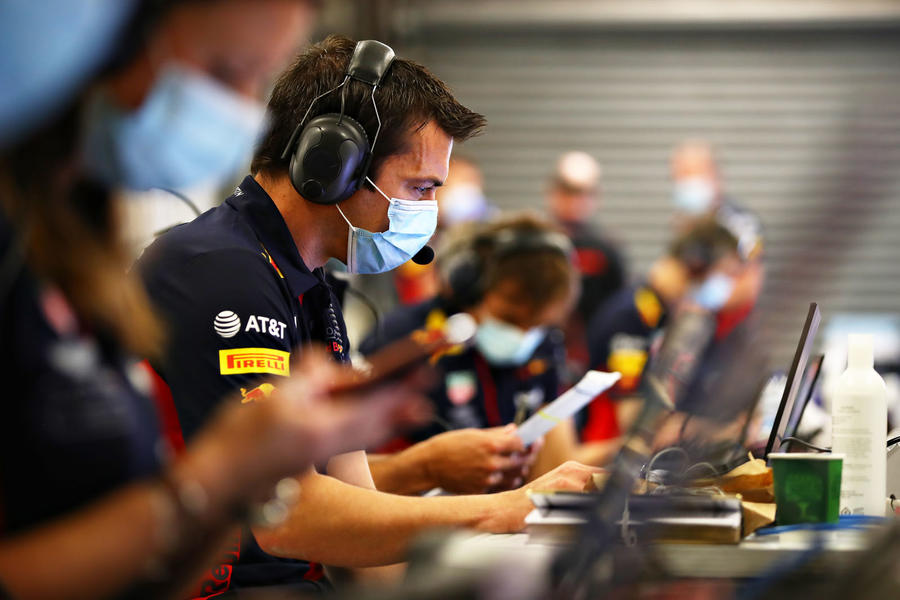 Austria also got on top of the coronavirus relatively quickly, and the country relaxed its lockdown earlier than most European territories. The government saw F1 as a way of signalling to the world that Austria was open for business. In addition, the track’s remote, alpine location – with nearby Zeltweg airfield able to receive private jets – meant that it was a good place to test F1’s new ‘closed doors’ protocols.

All of those factors gelled with fortuitous timing. When F1 boss Chase Carey and his team began working on a revised schedule of an initial eight races in Europe, beginning with two in Austria, they didn’t know that much of the continent would begin to open up in late June and that events such as domestic football would be able to restart.

Key to the process was the FIA’s Covid-19 Code of Conduct. Produced to be scrutinised by governments of hosting countries, especially those where bans on mass gatherings remain in place, it details testing and other procedures. The plan involves creating ‘bubbles’ and splitting personnel into groups. There was no mixing between teams, and there are even smaller units within each team. There are special rules for organisations such as the FIA and tyre supplier Pirelli, whose staff usually cross over between teams.

Every effort was made to reduce the number of people on site. The regulations were changed to restrict teams to 80 people, of whom 60 represent the usual limit of operational personnel with a direct influence on the car. There’s no scope for VIPs or sponsor guests within the extra 20 passes.

The giant team hospitality buildings that travel from track to track and require a fleet of vehicles and a dedicated set-up crew will be left at home in 2020. In their place in Austria were temporary cabins provided by the organisers. Crew catering moved to the VIP units above the pits, which were otherwise unoccupied, as there were no guests to feed. Tents were added behind the garages to increase the work space – one of many measures taken to reduce contact between team members. Meetings moved online, and even the traditional FIA drivers’ briefing became a virtual event. 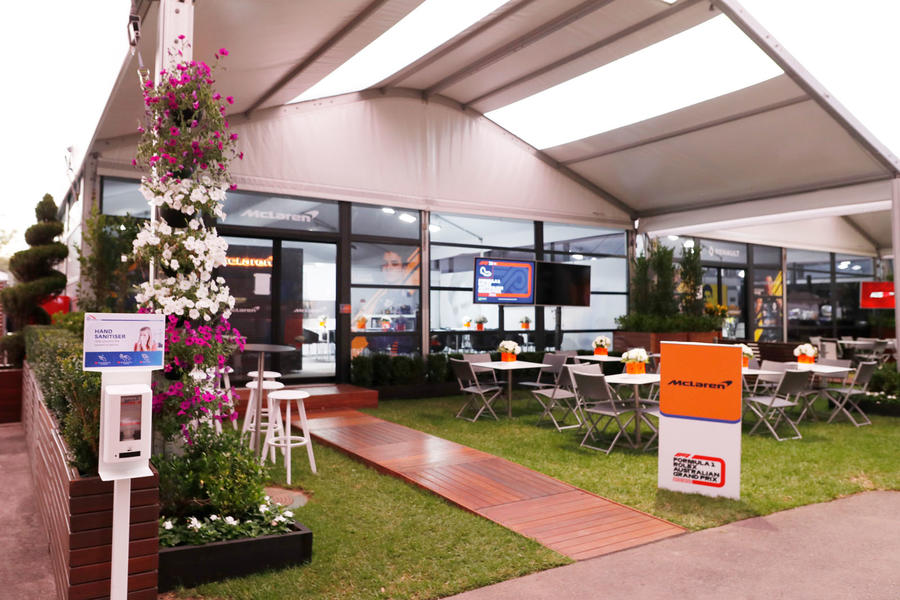 The token corps representing the written media wasn’t granted access to the paddock, and even TV crews’ access was limited. Team members reported that it was like a ghost town much of the time.

A key requirement was that everyone had to wear a mask from the moment they passed through the circuit gates – something that seemed a little over the top, given that nobody in local shops, restaurants or bars was thus equipped. Then there was the inevitable coronavirus testing. To gain access, it was necessary to have tested negative within the 96 hours prior to arrival at the circuit and then to test again during the race weekend.

A special centre was set up at a driving school building near the paddock to undertake testing on an industrial scale, with the results of more than 2000 people carefully monitored by the FIA. If anyone failed, there was a procedure in place. Nearly 5000 tests were conducted in the weeks before and after the race, all coming back negative.

The planning paid off and everything worked. However, there was no escaping how flat everything felt, especially on the Sunday, when the usual pre-race energy was lacking. The grid was restricted to essential team personnel, so there was none of the usual chaos of TV crews frantically chasing drivers and VIPs for comment.

A new anti-racism element added interest to the preliminaries, and we waited to see which drivers would join Hamilton in taking a knee and who would opt out. After that, the Austrian national anthem echoed around an empty grandstand, with no one there to salute it. 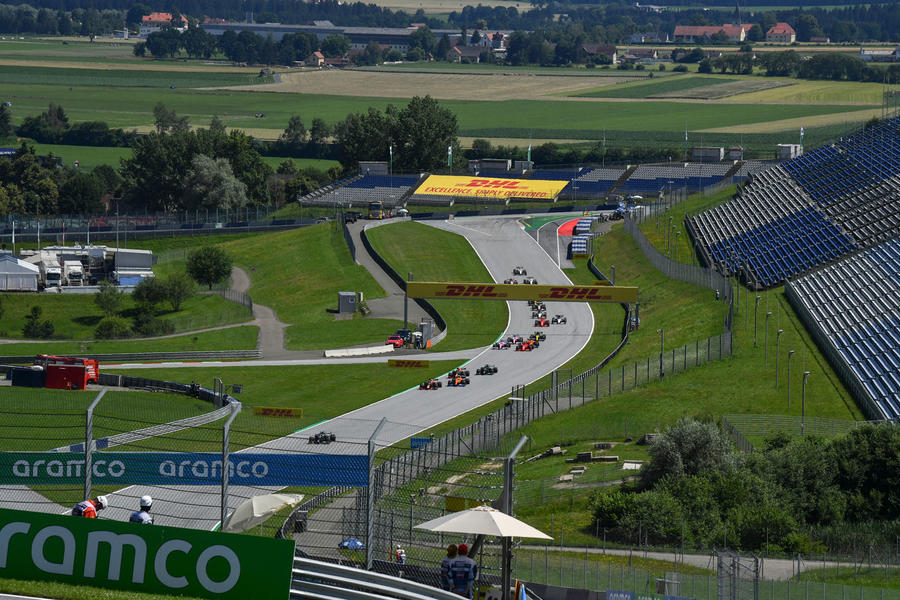 Winner Bottas looked a bit bemused by the post-race celebrations, with no crowd and a ground-level podium laid out on the track. Proceedings were saved by the sheer joy erupting from surprise third-place finisher Norris and his McLaren team. At least we had a race, and a very enjoyable one at that, given that such a scenario had seemed unlikely just a few weeks earlier.

“We were all very happy to be there, and generally it was well managed,” Haas driver Romain Grosjean told Automotive Daily’s content partner Autocar. “The measures? Yes, it’s not the greatest thing to wear a mask at all times! Before the race, the atmosphere was a bit different. There were less people in the paddock, the fans weren’t in the grandstands. And yes, we missed that. But once you sit in the car and you’re ready to go racing, everything feels pretty similar.”

Ferrari’s Charles Leclerc became the first F1 driver to have his knuckles rapped for socialising with people outside his ‘bubble’ between races. Instead of staying at the Red Bull Ring in the week between the Austrian and Styrian grands prix, he headed home to Monaco – and was photographed out with friends while not wearing a mask.

That earned Leclerc – who was tested twice for the coronavirus before returning to the circuit – a warning from the sport’s bosses. Mercedes-AMG driver Valtteri Bottas also returned to Monaco between the two races but escaped censure because he remained in isolation at his home.

The other 18 drivers remained at the track, with Lewis Hamilton saying that he spent the time meeting with his engineers and training. He added: “I went on walks with my dogs, but that was about it.”

From F1 to kart racing, we all have that one race that will forever stick in the mind. These are our highlights. You know you’re...
Read more

When Honda said it was leaving F1, what was Red Bull to do? Buy the engine rights and set up a powertrains firm, of...
Read more

Max Mosley: A man who relished getting what he wanted

His wilfulness rubbed some up the wrong way but made him an effective leader through turbulent years. “Before we get into that, would you like...
Read more