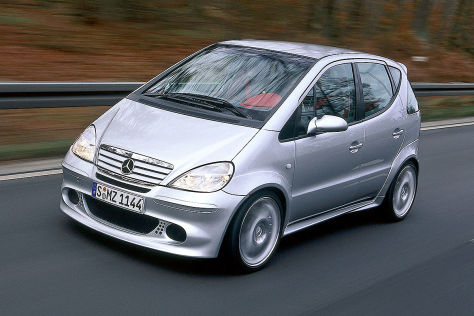 The A-Class W176 A45 was not actually the first AMG in the pint-sized lineup – strictly speaking, AMG engineers developed the first version back in 1998 based on the first A-Class (W168). What’s even more bonkers is that it housed two engines, front and rear, and only four A38 AMGs were built.

Casting our minds back, the Mercedes-Benz A-Class did not have an easy start in the late 1990s. Catastrophic performance in the moose test severely damaged the reputation of the little Mercedes at the time and is still in the memory of car fans today. Plus, the performance of the W168 A-Class was anything but impressive, with the top model when that was launched in 1997 – the A160 – producing a meager 76kW. Only later did more powerful versions such as the A190 and A210 Evolution follow.

But in 1998, AMG presented the near-series study of a very special A-Class, the A 38 AMG. Often also known as the A190 Twin, it is one of the craziest projects Affalterbach has ever implemented. Providing Formula 1 racing drivers Mika Häkkinen and David Coulthard A190a as company cars at the time, a second engine was planted in the rear by AMG to boost performance. Thanks to all-wheel drive, the A 38 accelerates from 0 to 100kph in 5.7 seconds and reach a top speed of 230kph. Shifting takes place via a manual five-speed transmission that synchronizes the two engines via an automatic clutch. Incidentally, the A 38 AMG can also be driven very comfortably in what is known as mono mode with just one engine. Depending on the use, Mercedes indicated the consumption between 8.5 and 12.6 litres per 100km.

The idea behind the rare A38 was, in addition to building a very fast A-Class, to show how variable the first A-Class of the 168 generation is. Thanks to the chassis construction with a sandwich floor, the second engine could be placed in the rear without any problems and without losing any trunk space. Incidentally, the weight distribution was also improved by the Bimoto conversion. The engines are ordinary four-cylinder motors (M166) with 93kW. Compared to a normal A190, the A38 weighs around 250kg more.

The engine accounts for around 150 kilos of this and additional equipment and chassis modifications account for a further 100kg. At AMG, the twin-engine A-Class was lowered ten millimeters and equipped with the large braking system of the Mercedes E55 AMG (W210). Visually, the A-Class with two engines can be recognized by a modified front apron with large cooling air openings and a modified rear apron with double pipe exhaust. Wheel arches that are flared by ten millimeters on each side create additional space for 18-inch rims. In the interior, too, handywork was done: the A38 was given red designo leather upholstery, red seat belts, a suede steering wheel and a leather-covered dashboard.

Due to the elaborate design, the A38 AMG or A190 Twin unfortunately remained a near-series study, of which at least four were built. In the series version, end customers had to make do with the A210 Evolution built between 2002 and 2004 with a maximum of 104kW. For Formula 1 fans, however, there was still the special model Mercedes A-Class Formula 1 Edition, limited to 250 copies, in a striking Silver Arrow paintwork.