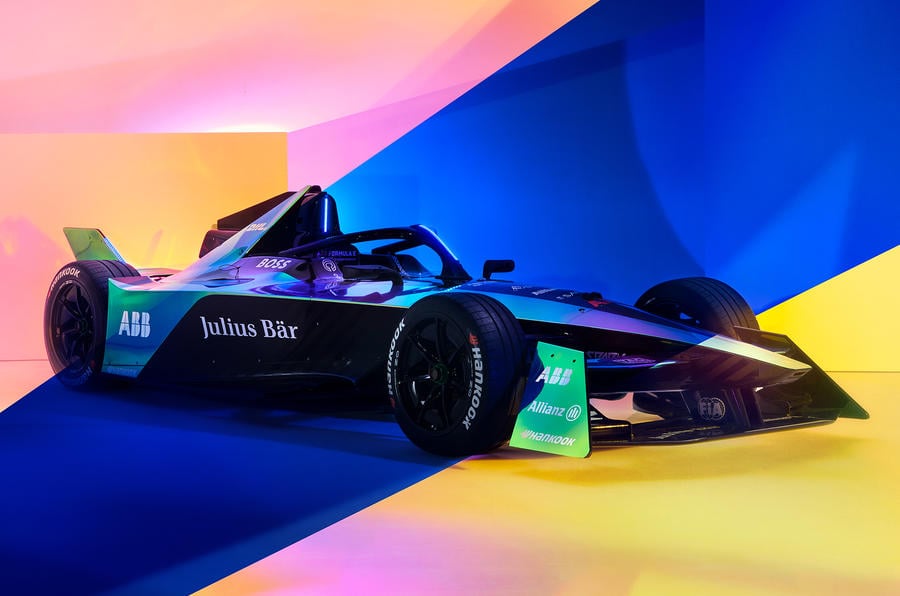 Porsche’s Formula E drivers give their reaction to the latest electric racer.

It’s hardly a surprise that opinions are divided on the extreme looks of Formula E’s fighter-plane-inspired Gen 3 racer that will take its bow for season nine of the electric-powered single-seater series next year – even among the drivers.

“The rear of the car looks quite nice. The other parts… yeah, you need to get used to it” is how Porsche’s Pascal Wehrlein diplomatically puts it. Team-mate André Lotterer is a little more on-message: “It’s a very striking design with a unique identity to represent the ‘race of the future’,” he says. But they agree on what really counts. “What is more important is the performance and how it will feel on track,” says ex-Formula 1 driver Wehrlein. “From the data, it looks quite promising. We have a lot more power, a lighter car which is nicer to drive and more agility.”

The Gen 3 was revealed at the Yacht Club de Monaco ahead of the recent e-prix in the principality. Seven manufacturers are publicly committed: DS, Jaguar, Mahindra, Maserati, Nio, Nissan and Porsche. So far, a dozen teams have been announced, including the German Abt squad, which will return after a year away following Audi’s withdrawal at the end of last year. The identity of its powertrain supplier has yet to be confirmed.

The headline upgrades for what series co-founder Alejandro Agag describes as the “third age of Formula E” do represent a significant boost in performance. From Gen 2’s maximum power of 250kW, the new cars will boast 600kW from two power sources: a 250kW motor on the front axle has been added to the 350kW motor on the rear, with top speeds predicted to hit 320km/h. Although exactly where that might be possible, given the tight nature of most Formula E city-street tracks, remains to be seen.

The new car is more compact in its dimensions and 60kg lighter, largely thanks to a smaller battery and the removal of the rear brakes. The battery size has been reduced by upping the car’s regenerative power, including for the first time from the front axle, to provide 40 per cent of the energy required for the series’ 45-minute races.

“It’s the most efficient racing car in the world, the first ever net-zero car, and it’s all going in the right direction,” enthuses three-time Le Mans winner Lotterer, an unapologetically big advocate for Formula E. “It’s the biggest step we’ve seen, bigger than from Gen 1 to Gen 2.”

In terms of racing, no rear brakes sounds dramatic but is the opposite, according to the drivers. “Even now with Gen 2 we are braking quite a lot with the regen and motor,” says Wehrlein. “Right now you have to imagine it’s like a handbrake in the race: we just recuperate energy on the rear and the car is constantly moving at the rear. Next year we can also recuperate on the front, so it will feel like a normal racing car on push laps.” “Braking will be a lot more consistent,” says Lotterer, “because with discs you are dependent on temperature and the quality of your brake set, which is not always something you can control. When we programme the brakes through the MGU, it’s a lot more precise and can also be a tool for us to drive the car better. For the engineers, it will be a big task to get this perfect and right, but also for us drivers to give the right feedback to point the team in the best direction as fast as possible.”

The Porsche drivers are intrigued by how Gen 3 could – and probably should – increase the racing spectacle, which as ever remains partly dependent on the tightness of the tracks. At Monaco, Formula E already produces a lot more overtaking than processional F1. “The car is a bit more compact, but I don’t think it’s by a lot,” says Lotterer on his racing expectations. “It will sometimes make things easier, but I think it’s more about the agility of the car that will give us the opportunity to take more risk and overtake more.

On the other side, the Gen 3 is back to open wheel so there will be less rubbing. The Gen 2 wheel spats have been removed, making the suspension much more vulnerable, and this should reduce the high amount of contact characterised in too many Formula E races. “If you look at the front wing, it’s sticking out quite a bit, so you will have to be careful, especially as the downforce levels are now a lot more relevant. If you lose your wing, it will be a performance penalty.”

What isn’t yet clear are full details of ABB’s fast-charging capabilities. Recharge pit stops are planned to be added next year for further strategic variety, in a series that already hands drivers Attack Mode and Fan Boost power upgrades during races. So will this spell the end of energy management as a dominant factor, allowing drivers to race flat out? “The final regulations are still not 100% clear, so let’s see,” says Wehrlein. “What is clear is that we can recuperate more energy and the battery is a bit smaller so the car is a lot lighter. It’s still a question mark, including the pit stops and fast charging and what options we have there.”

For the regulator, Formula E and its suppliers – including Spark Racing Technology on the chassis, Williams Advanced Engineering on the battery, Hankook (replacing Michelin) on the all-weather tyres, and most obviously ABB on charging – there is still a lot of detail to be ironed out. For the drivers, they have enough on their plates dealing with the current season. But their chance to sample Gen 3 for the first time will loom mid-summer and whatever each thinks about that way-out appearance, it’s the possibilities of performance and how they can use it best that will keep them hooked.