The retro Honda e that sparked plenty of interest at its reveal was quickly quashed by Honda Australia. But are we missing out on much, anyway?

A glut of new city cars with dinky dimensions and tiny running costs is to set arrive in 2020 but Australia, as is nearly always the case, will lag behind the race to get these new electric cars on its shores.

Of everything available in the world right now, the Honda e is one with looks that many are fond of, but with a limited range, would it even stand a chance of surviving here? The Nissan Leaf does, and the new Mini electric too… so maybe.

It stands apart from its rivals thanks to its cute styling and comfortable cabin, while the Honda has charm by the bucket load. You do have to pay for the privilege, though, and for some the relatively small range will be hard to stomach because some of those same rivals can go further for less cash.

If the thought of switching from petrol power to electric has crossed your mind, then soon will be the time to do it. Around two dozen new cars powered purely by electricity will be launched over the next two years, such as the VW ID 3, though undoubtedly the cutest will be the Honda e. Charming and characterful, the Honda e has the potential to really stand out in a sea of small EVs like the MINI Electric, BMW i3 and VW ID 3, largely on account of the way it looks. But with prices kicking off at around $50k overseas, and it having a rather small range of up to 137 miles, is the Honda e an expensive piece of jewellery or a compelling small electric car?

Among the glut of all-electric newcomers, the e has a key advantage, however – and that’s the styling. In a world of bloated SUVs, the e looks refreshingly small but, strangely, it’s pretty much identical in size to the new Honda Jazz. It’s a clever piece of design, not just because it’s a large car that looks small, but also because it’s cool, classless and desirable in an Apple iPhone kind of way. Critics might say the BMW i3 did that nearly a decade ago, however. The i3 similarity doesn’t end there, either. While the Peugeot 208 and the MINI Hatch can be had in petrol, diesel and electric flavours, the Honda e is completely standalone. Honda has even developed a brand new platform for it which won’t be used on any other model. That’s an expensive move that flies in the face of what other car makers are doing – again, just like BMW’s policy with the i3 back in 2013.

Pull on the deployable, Aston Martin-like door handle and step inside and, just like the exterior, the interior is refreshingly different. Wood trim stretches across the top of the entire dashboard and above it sit three TFT screens, giving a look not too dissimilar to a John Lewis TV cabinet. The layout comprises an 8.8-inch display in front of the driver, along with two 12.3-inch screens for the infotainment. The system is powered by a new interface and operates much like a smartphone, with large tile icons for various features (from power flow to activating the car’s onboard wi-fi hotspot), pinch-and-zoom functionality and the ability to switch information from one screen to another. 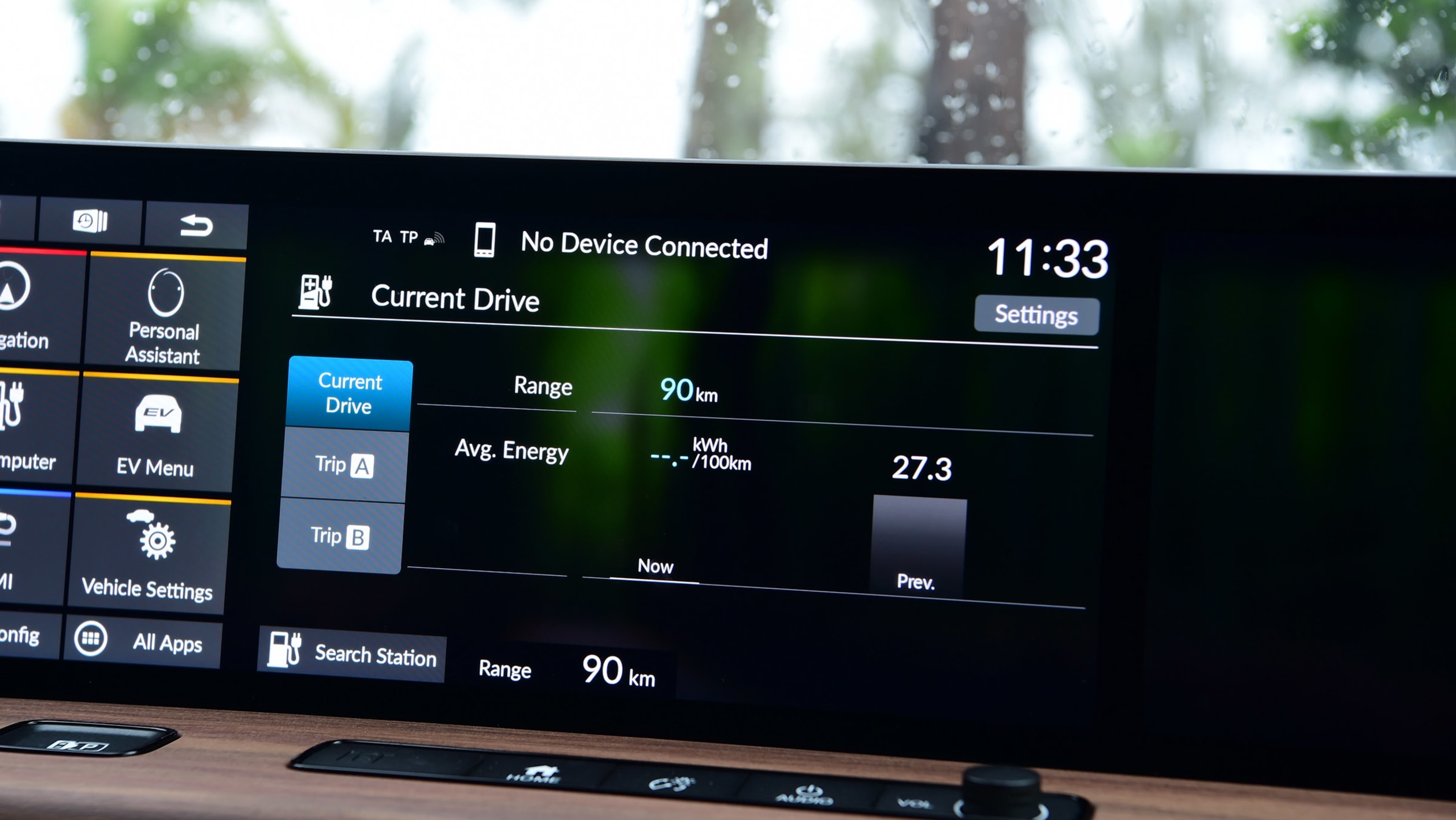 A new voice-activated ‘personal assistant’ is present, the displays can be personalised with static wallpapers or even a moving aquarium – only be activated when the car is stationary – and an HDMI connection found beneath the dashboard also allows passengers to connect up a games console. There’s also a smartphone app that allows owners to monitor the battery status and create a digital ‘key’ which can be shared with others to open and start the car. The TV-like arrangement of screens all look impressive on first impressions, but the more time you spend playing with the new infotainment system, the more some annoying foibles become apparent. The sat-nav can’t stretch across both screens, for example, and its general look and feel is a little too TomTom-like. And while the aquarium feature is supposed to be fun, it just shouts ‘Windows 95 screensaver’. That’s a shame because the interior is pretty advanced compared with the MINI Electric and Peugeot’s e-208. The three screens are book-ended by live camera feeds that take the place of the door mirrors, and they actually work surprisingly well. Unlike in an Audi e-tron, they are adjusted in the traditional way, with controls on the door, and are more in the driver’s line of sight. A rear-view mirror which can switch to a live video feed (a Range Rover Evoque has an identical feature) joins the side-mirror cameras as standard equipment, too. Overall, the cabin is a nice place to be. The materials used are mostly of high quality, the seats are comfortable and supportive, there’s some decent storage (a nifty pull-out cupholder within the centre console is a highlight) and thanks to a flat floor, it feels roomy up front. Space in the back is a little tight but there’s more space than in an e-208 and the Honda e comes with five doors compared with the three-door-only MINI. A desperately small boot (171 litres with the seats up) is a major downside, but that’s the fault of the electric motor, which sits under the boot floor. Meanwhile, the 35.5kWh battery pack sits in the middle under the passenger area.

The entry model gets which 16-inch alloys and a 100kW electric motor with a range of 220km. The upper-spec Advance adds not only 17-inch alloys but also heated seats and steering wheel, plus Honda’s semi-autonomous parking aid. The electric motor also packs 113kW but those 17-inch wheels reduce the range to just 201km; that’s around 30km less than MINI claims for the Electric, 148km less than the e-208 and a whopping 190km less than the Renault ZOE. Opt for the 16-inch wheels and the range shoots back up to 220km, but either way, there should be plenty of range for the average commute. With the motor at the back of the car, power is sent to the rear wheels, allowing the fronts to complete a u-turn in 4.3m, while charging is via a CCS or Type 2 port under the black panel on the bonnet. Plug into a 100kW rapid charger and a zero-to-80 per cent top up takes 30 minutes while a 7.4kW home wallbox charge takes a little over four hours.

Does the Honda e drive as good as it looks? Yes, is the short answer. It feels most at home in built-up areas, as you’d expect, with those dinky dimensions making it feel very manoeuverable. The amazingly tight turning circle makes parking a doddle and with a very healthy 315Nm from the electric motor, racing from traffic lights and zipping through dense traffic becomes a fun new game. Head into the countryside and the e still manages to acquit itself very well. It gets independent suspension all round, so the ride is plush and on undulating roads, it isn’t lumpy or unsettled. That wheel-at-each-corner stance makes the car feel quite stable at high speeds. The steering has a pleasing amount of feel through it but while the Honda e is rear-wheel drive, there isn’t quite enough power for some enthusiastic driving. However, you can feel the car being pushed out of corners rather being pulled like in the FWD electric hatches, which adds to the fun factor. The only downside to that is with the front wheels having very little to do, the front of the car can push wide in faster corners and consequently the e can feel a little nervous.

The only real niggle with the driving experience is the unusually high number of brake-regeneration modes. Paddles on the back of the steering wheel adjust four mild levels offered in Normal or Sport modes. Prod the ‘single-pedal’ mode button on the centre console and you’ll be able to drive around town without needing to touch the brake pedal at all, but here there are three further modes. While it does allow the battery to harvest as much energy as possible, it does seem like overkill in such a city-based car and we’d expect most owners to never fiddle with the settings.

Given there’s a presence of short-range electric vehicles in Australia, the Honda e might just stand a decent chance. Priced near its European starting ticket of $50k in Australia, it would also be right on par with the current Aussie crop. Pity there’s no commitment yet for Honda Australia to find out…

Honda provides us with the first glimpse of the upcoming next-gen Civic Hatch. Honda has shown a teaser image of its upcoming Civic Hatch which...
Read more