Is the Ferrari SF90 the future of the supercar? Combining a V8 with three electric motors makes the SF90 Stradale a 735kW beast you can tame. Will it prove a blueprint?

My first visit to Maranello came in 1993, to drive the then new 456GT. It was in its own understated way a landmark car for Ferrari: all-new from end to end, the first with a six-speed manual gearbox and the first in far too long not to rely on the Fiat parts bin for the majority of its switchgear. It would shortly beget the 550 Maranello, so siring a line of front-engined V12 supercars that remains unbroken to this day.

I can remember every moment of that trip and thinking to myself that the day that spending one’s time in such a way felt remotely normal would be the day I left this profession for good. Twenty-seven years and who knows how many trips later, that day seems as far off as ever. Not least because the most recent trip felt so like the first: less a simple automotive appraisal, more a looking glass into the future of the company. Back in 1993, the 325kW 456GT was the most powerful standard production road car that Ferrari had ever made, with only the limited-edition F40 beating it, thanks to 356kW. Yet the car I’m driving today,  the SF90 Stradale, makes 735kW – more than double the power of even the F40, let alone the 456GT. If it seems strange to compare a mid-engined two-seater from 2020 with a front-engined 2+2 from 1993, remember the 456GT and SF90 have in common far more than a badge. Like the 456GT, the SF90 is all-new. Like the 456GT, it has become Ferrari’s priciest and therefore flagship model. And it too shines a light not only into Ferrari’s future but also that of the supercar and hypercar genres.

The SF90 is also Ferrari’s fastest car to date, both in a straight line and around the track, its traction, tyre and electronic technology overcoming the fact that its power-to-weight ratio is actually inferior to the 2013 LaFerrari’s. Indeed, on street tyres, this mainstream production Ferrari road car can lap Fiorano at about the same pace as the track-honed, race-prepped FXX from 15 years ago did on slicks. Which, when you think about it, is staggering. 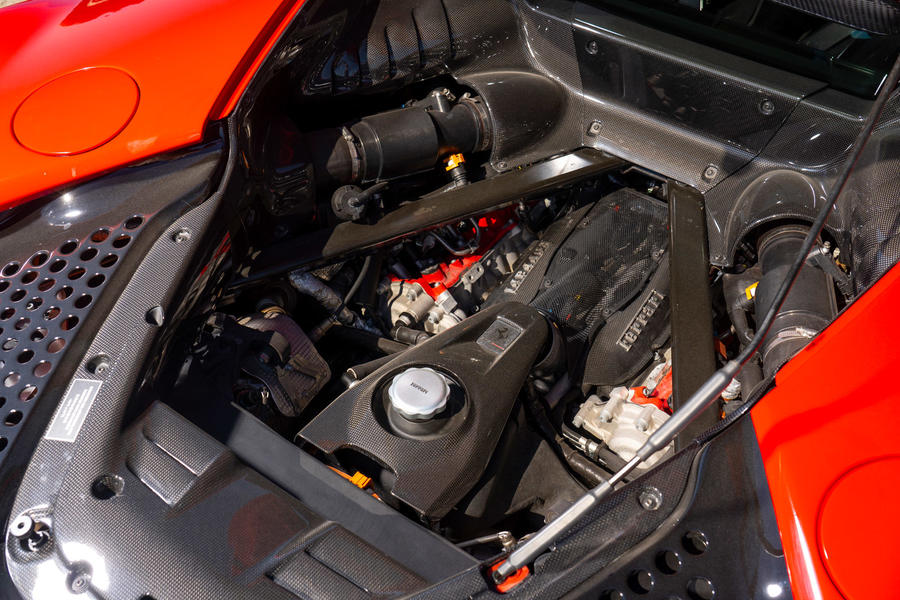 Ah, Fiorano. Actually, and on this occasion alone, I’d not wanted to go to Ferrari’s fabled test track. But in Ferrari’s unique and curious way, I was told that my attendance was ‘mandatory’. So that was that. And I was getting to drive a near-thousand-horsepower (745kW) Ferrari on a purpose-built circuit, so you can dry your eyes now.

You get so little time. I think I had seven laps of what is quite a short circuit – seven laps in which to get up to, on to and then past the limit of one of the fastest and most powerful road cars yet built. Seven laps in which to reach meaningful conclusions on its behaviour in all its driving modes, as well as figure out the pros and cons of Ferrari’s first-ever electrically driven front axle. And not crash. That bit is important and by no means a given around here. Seven laps at Fiorano speed equates to just over nine minutes of driving. It’s one of the busier times a motoring journalist gets to spend driving a car. I actually didn’t bother with the SF90’s Sport mode, because I’d find out about that on the road. Nor did I fiddle with the hybrid modes, other than to select Qualifying, because that’s the only way you get all 735kW. Well you would, wouldn’t you? And I didn’t spend any time warming up, getting into the groove or composing my features, because there wasn’t any. I just selected Race mode and went for it. And I could see in an instant where that lap time came from. The car was so fast, yet so clean and precise. Who knew that a thousand horses could be so successfully harnessed? Not me, for sure. So I went one further around the little manettino dial and turned off the traction control.

At the exit of the first corner, the car went one way and the steering the other. Instant, heart-in-throat oversteer. I backed out instantly. A more progressive reapplication of power this time and still the back slid wide. But this time, once it reached a certain angle of slip, it just stayed there, in suspended animation as the combination of four driven wheels, 735kW and one slightly befuddled driver, all overseen by simply dazzling electronic governance, contrived to make the SF90 slide until there was no opposite lock. It felt utterly secure.

Indeed, you’ll appreciate just how hard the SF90 is still labouring to save you from yourself only when you finally switch off the stability control systems. And then, even if you’re reasonable at this stuff and even if you’ve been doing it for a very long time, you’re going to be very busy indeed. So busy indeed that when I got back to the pits and looked at my telephone, I discovered that I’d missed a call while I was out there. Despite the ringer turned up as loud as it would go, I simply hadn’t heard it. Some part of my subconsciousness had intercepted the message incoming from ear to brain and simply turned it around at the border. 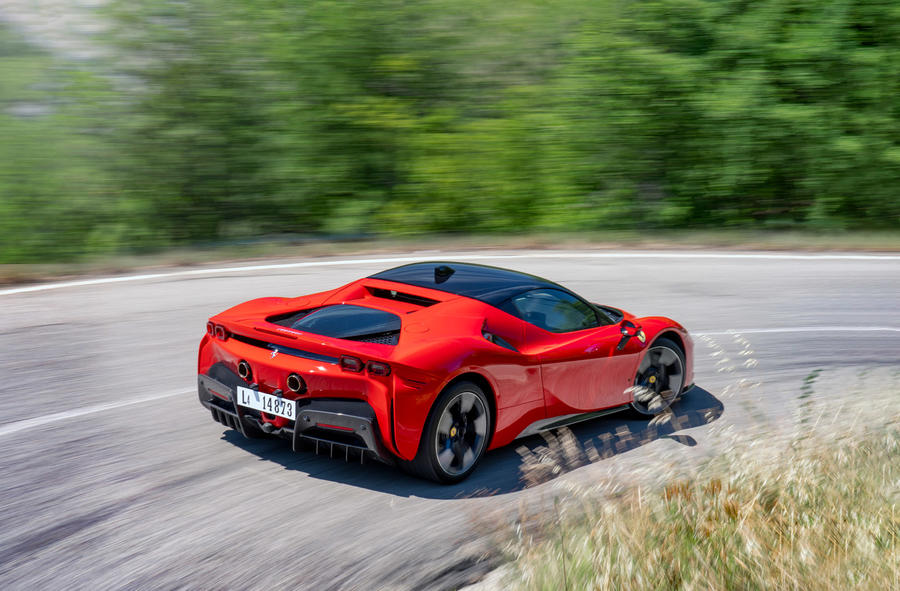 In many ways, the SF90 was even more impressive on the road than on the track. In fact, it seems implausible, if not actually ridiculous, that a car with this much potential should prove so easy to drive. It’s quiet, really comfortable, simple to operate and a lovely place to be.

So isn’t this all great news, both for Ferrari, whose car appears to have bullseyed every target set for it, and for the future of the supercar if it’s to set off on the same blazing trail? Well yes, but only to a point. You see, such capability has been achieved at a price of a different kind to that which Ferrari charges for the SF90. To hit all of its marks, Ferrari has had to come up with a car with a twin-turbocharged 4.0-litre V8 engine, no fewer than three electric motors and all the batteries, inverters and other componentry required to make them all work together. And that’s quite a lot of mass. Ferrari says the SF90 weighs 1570kg, but that’s a dry weight using all the lightest, optional equipment. Ferrari says the extras save around 100kg, and you can usually add another 100kg to take a car from its dry to the far more widely recognised kerb weight. Which means a standard SF90 probably weighs nearer 1770kg at the kerb. Which is a lot. The Ferrari F8 Tributo has a kerb weight of 1435kg, which means that while the SF90 is almost 225kW stronger than the F8 Tributo, their power-to-weight ratios aren’t so different at all: 369kW per tonne for the F8 Tributo, 415kW per tonne (on a presumed 1770kg kerb weight) for the SF90. 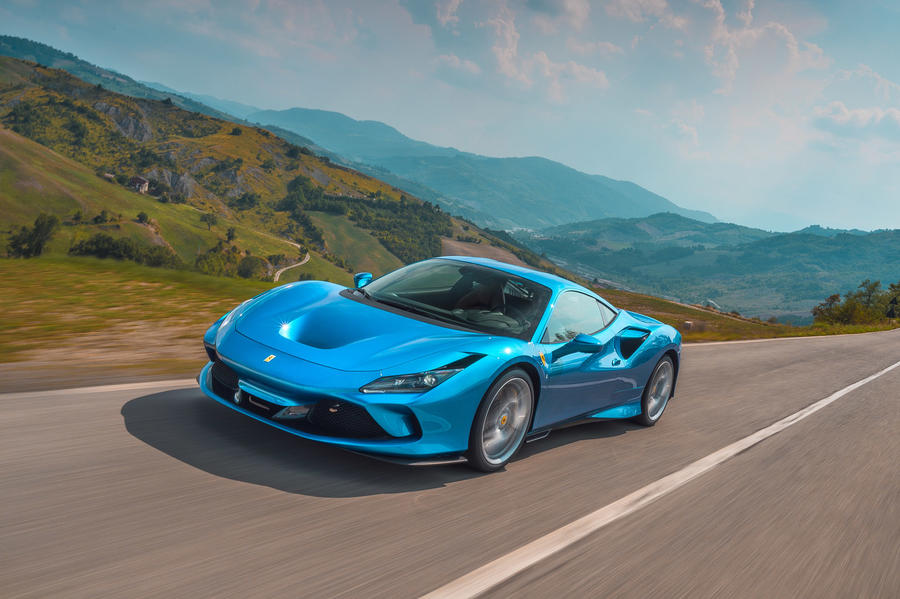 So what’s this actually buying you? Sufficient traction to be able to deploy 735kW without further delay and thereby pop 2.5sec 0-100km/h runs. But as anyone who is honest and has actually accelerated that fast will tell you, there’s precisely nothing to recommend the experience unless you particularly get off on scaring your passengers witless or feeling rather sick. In terms of g-force, it’s almost exactly the same as doing a panic emergency stop in a car with really good brakes, just in reverse. And I can think we can all agree that there’s not much fun in that.

There are other problems associated with the mass, too, not least the rather artificial feel of the steering. Most notably, the SF90’s electrically driven front axle may bequeath all that traction and otherworldly behaviour on the limit (although you may ask yourself whether it’s you or the car that’s actually driving), but it also takes away almost all your luggage space. The SF90’s boot is a quarter the size of that belonging to the Ferrari 812 Superfast, which means anything more than day trips for two people is going to at best require a lot of planning, at worst be simply impossible.

But there is a benefit here. It’s big and my guess is that it was the single most persuasive reason for Ferrari green-lighting the SF90. According to WLTP data, this car emits just 154g/km of CO2, the conventionally powered F8 Tributo 294g/km. So yes, on paper, this near-thousand-horsepower, 1700kg-plus hypercar not only produces little more than half the CO2 of the far less potent and much lighter F8 Tributo, it actually emits less than the flyweight 1.8-litre Alpine A110. But they will be a huge help in Ferrari’s quest to meet its emissions commitments. 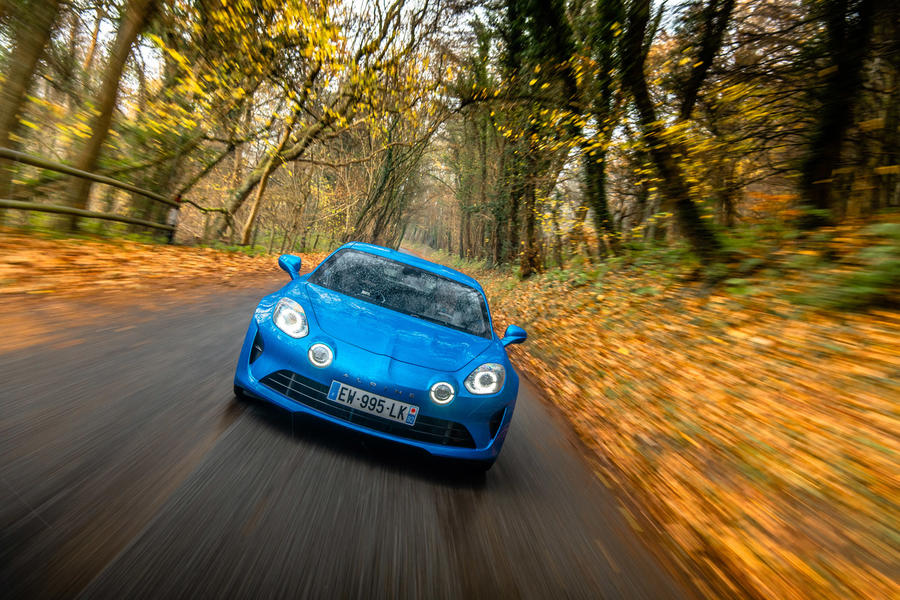 So on balance, is this the right way for Ferrari in particular and the supercar world in general to proceed? My unequivocal answer is yes and no. The emissions legislation isn’t going anywhere and will, in fact, only become more stringent, and until someone actually figures out how to make an electric car fun to drive – don’t hold your breath – hybridisation isn’t just advisable but unavoidable. Which is why Aston Martin, McLaren and Porsche have been developing such powertrains for their sports cars too, although none yet is in use.

But you can pursue it too far. However much I enjoyed and admired the SF90, nor could I help thinking how much better even than that it would be if it were simpler, lighter and more usable. Lose the two front motors and not only do you lose a load of weight but get your boot back, too. And although this sounds prosaic, out there among people who buy cars like this (which is in series production so therefore won’t be bought by collectors), such stuff really matters. Yes, you’ll drop a couple of hundred horsepower and a few tenths off the 0-100km/h time, but you’ll still be able to accelerate so fast that you might forget to breathe, which is enough for most.

All eyes now fall upon the replacement for the F8 Tributo, which is probably due a year or two from now. Will it be a hybrid? Will it have an electrically driven front axle? And will it be not just cheaper than the SF90 but also lighter and even better to drive? My guesses are yes, no, yes, yes and yes.