We take an F-Type to the Belgian motorway where Jaguar made its name as a sports car maker to consider its past and future.

What is it and where is it going? Those are easy questions to answer in this particular case. It’s a Jaguar F-Type coupe with a stonking great V8 and I’m driving it to the Jabbeke highway, a stretch of motorway in western Belgium with which Jaguar has some history.

But for Jaguar generally, maybe ‘where is it going?’ is harder to answer, particularly for the F-Type. There’s the Jaguar range as it exists now, and we know there’s a new XJ due, all-electric, expensive, luxurious and stylish. But beyond that, what will be for Jaguar or its sports car? Who knows? Not me. Not you?

Does Jaguar? Once, it had a very clear direction. In 1961, at the Geneva motor show, it revealed the E-Type and, well, I wasn’t there, but I hear it went down quite well. And in the same month, testers from The Autocar came here to Flanders, where a straight stretch of dual carriageway between the town of Jabbeke and the coastal city of Ostend was flat and had routinely shown itself to be quiet enough for obtaining high-speed road test figures.

In a road test, published on 24 March, just a week after the car was unveiled to the public in Geneva, the E-Type hit 241km/h – and with a slightly hooky engine – on this very road. The car from the show, a coupe with the registration 9600HP, was the car tested.

Another variant, a green roadster, registration 77RW (the road test car for The Motor and still owned by Jaguar today), was driven down to Switzerland overnight during the show itself by Jaguar test engineer and racer Norman Dewis when rampant demand for test drives looked like overwhelming Jaguar’s capacity to handle them.

Excluding the Channel crossing but including a drive through central London and before motorway networks were as widespread as today, Dewis still managed to average 109km/h between Jaguar’s base in Coventry and the show. He was also no stranger to Jabbeke. Today, the town has a plaque dedicated to him and Jaguar’s high-speed testing exploits on the highway in the early 1950s.

So, on the approach to the E-Type’s 60th anniversary, it seems like as good a place as any to come to assess Jaguar’s position today as… what, a sports car maker? Maybe. The F-Type is, as its name would suggest, the true sports car follow-up to that original two-seater, which was launched when British motoring was leading the world but stayed on sale until 1974, when it really wasn’t.

With our industry lower on confidence in the ’70s, the E-Type was replaced, of a fashion, by the XJ-S in 1975, which was in turn replaced by the XK8 and then the XK. It wasn’t until 2012 that Jaguar felt bold enough to revive the name’s lineage and call its new model the F-Type, with production starting in 2013. It will be a proper sports car again, they said back then.

And it was. Cleverly, Jaguar launched the roadster first, so we got to know that as a genuine sports car, with the coupe – which was only ever going to be better to drive – following about a year afterwards.

In this recently revised form, it still is a sports car. And as with the E-Type, if you wanted to drive from Coventry to Geneva in one gulp, it would also make a fine tourer – although if you do so next March for the E-Type’s 60th, it seems unlikely that you’ll find a motor show waiting for you when you get there. Another analogue product whose future in a digital world is a moot point.

It’s hot summer, not March, when I make a trip under the English Channel, staying in the car on the Eurotunnel as is now requested, in a 339kW, rear-wheel-drive P450 – the lesser of the two supercharged V8 F-Type models. 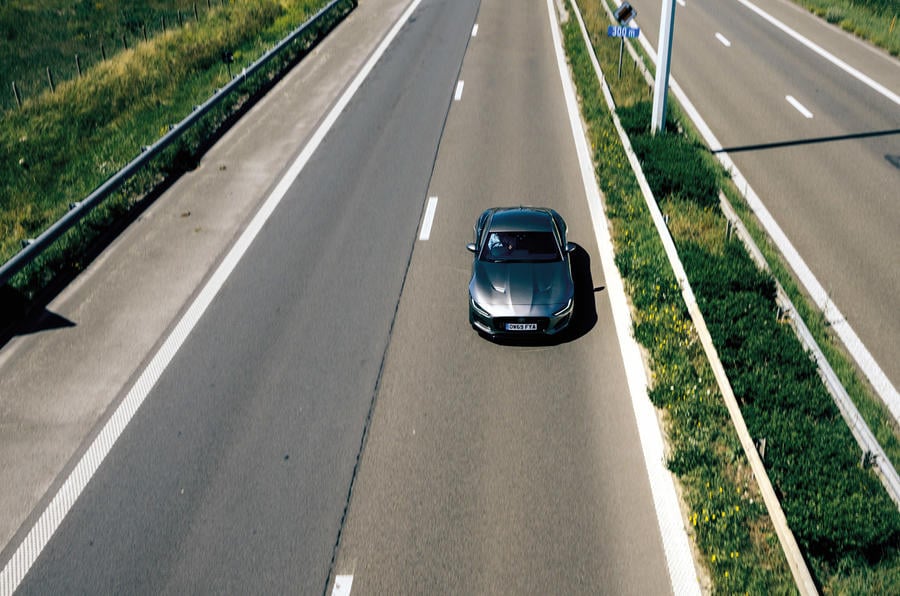 There’s a turbocharged four-cylinder petrol available, too, but there’s no V6 any more, so the range then moves to the 5.0-litre V8.

Does the F-Type seem old-school in a way that the 911 doesn’t? And if so, why? Both Jaguar and Porsche offer an electric car elsewhere and are electrifying other bits of their ranges, but their purest sports cars remain internally combusted. So there’s nothing unusual about the F-Type’s propulsion in its marketplace.

Perhaps it’s just the layout. It has a V8 engine in the front, driving the rear wheels – a traditional format of the type you’ll find in anything from a luxury limousine to a grand tourer to a sports car to a muscle car. Helpfully, the F-Type contains elements of all four. 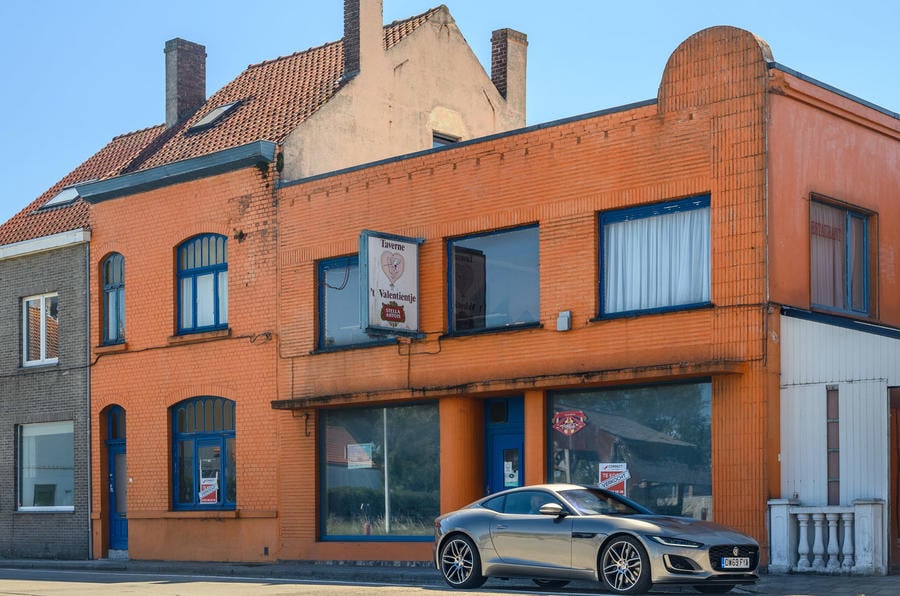 As I head into Belgium at around lunchtime, having left home at yawn o’clock in the morning, it’s the grand touring parts that are front of mind. I’ve never quite felt the F-Type’s seats are the world’s most comfortable and I would rather the wheel reached a little closer, but I think this is a pretty strong cabin, discreetly coloured and well finished, with a bit more flair than any German competitor’s.

There’s a 70-litre petrol tank and fuel consumption is at the mid-to-high 14L/100km mark, giving me a range (an often undervalued element of a grand tourer’s ability) of around 643km.

The F-Type rides well, too, and steers comfortably, and it has the right amount of weighting and feedback in its controls. Jaguar doesn’t get everything right, but it’s particularly good at tuning this sort of thing. Steering weight and response builds naturally; there’s no whip-crack turn-in in an effort to make it feel more agile, nor artificial stodge around the straight-ahead to suggest greater straight-line stability. Things are, instead, as they should be: entirely natural, conventional and just pleasingly well tuned.

It’s also quite engaging while it’s at it. You don’t really need to rev the crackers off of this engine to reach its performance. It makes a good noise whether you do or not, but the fact that it makes 588Nm of torque from just 2500rpm means it’s non-essential.

The engine, though, is such a feature of the F-Type that you do wonder what comes next. The F-Type is currently a seven-year-old car and has only just had its big facelift. When – if? – it’s replaced, it’s conceivable that the life cycle of the car that follows will be nudging into the time when you can’t sell engines perhaps at all, let alone engines like this. So what drives the ‘G-Type’? What becomes of the sports car?

About the next XJ, Jaguar design chief Julian Thomson recently said: “We want to make it a beautiful car, with an engaging drive and a luxurious interior. We’ll do each of those our own way; we won’t be putting a tape measure on rivals to just match, match, match.” Which sounds right. Nobody seems to mind that Porsche or Lexus don’t benchmark and measure themselves against the German big three, least of all Porsche or Lexus. If Jaguar makes engaging, beautiful cars in profitable numbers, it will be happy days, whatever defines a sports car by then.

Still, that’s for another day. Today, by coincidence, is close to what would have been Dewis’s 100th birthday. Born on 3 August 1920, he in his later years wanted to drive at 100mph in a Jaguar at MIRA Proving Ground on its 100th, but sadly he didn’t quite make it that far.

However, this is a Jaguar sports car and this is a road he knew well and on which he drove at some pretty stern speeds. I’ve gone back and forth between two junctions for the camera enough times to reckon that nobody is really watching. And, well, even if they are, perhaps if I explained, they would understand…

Before huge high-speed test tracks at places like Idiada in Spain and Nardò in Italy were a thing, speed testing was pretty common on recently built motorways and dual carriageways. So it was eight years before Autocar’s run on the Jabbeke highway, on 21 October 1953, when Jaguar engineer Norman Dewis lined up there in a Jaguar XK120, aiming to set a production car speed record.

You will note the word ‘production’, but these things are relative. A headlight had been removed and its socket used as a ram air inlet for the engine. Dewis sat on a piece of foam on the floor, because if he were on the usual seat, he wouldn’t fit beneath aircraft canopy that was lowered over his head. There was a rigid tonneau on the passenger side of the cockpit and the underbody was covered.

One side of the dual carriageway was closed for the attempt. Dewis did a flying mile in both directions, averaging 172.4mph (277.45km/h), verified by the Royal Automobile Club of Belgium. The following week, The Autocar reported the XK120’s record in a couple of short paragraphs and reminded readers that the canopy and undertray were optional equipment on the XK120. I wonder if anybody did actually try to order them…

The local police called time on closing the road for high-speed testing after this, although evidently it didn’t stop less official high-speed runs on the stretch; 241km/h on an open road doesn’t sound much better than 277km/h on a closed.

It was different in Dewis’s day

Our drive to Belgium (and onto the Netherlands to sample the new Donkervoort D8 GTO JD-70) was snatched a few days before Brits who had been there had to quarantine in self-isolation for two weeks on their return. Today, you can drive through a country not on the travel corridor list (Germany is but not France or Belgium) in a private vehicle and then not have to quarantine so long as you don’t stop. Or, if you do, “no new people get into the vehicle” and nobody “gets out, mixes with other people and gets in again”, meaning breaks and refuelling stops are possible.