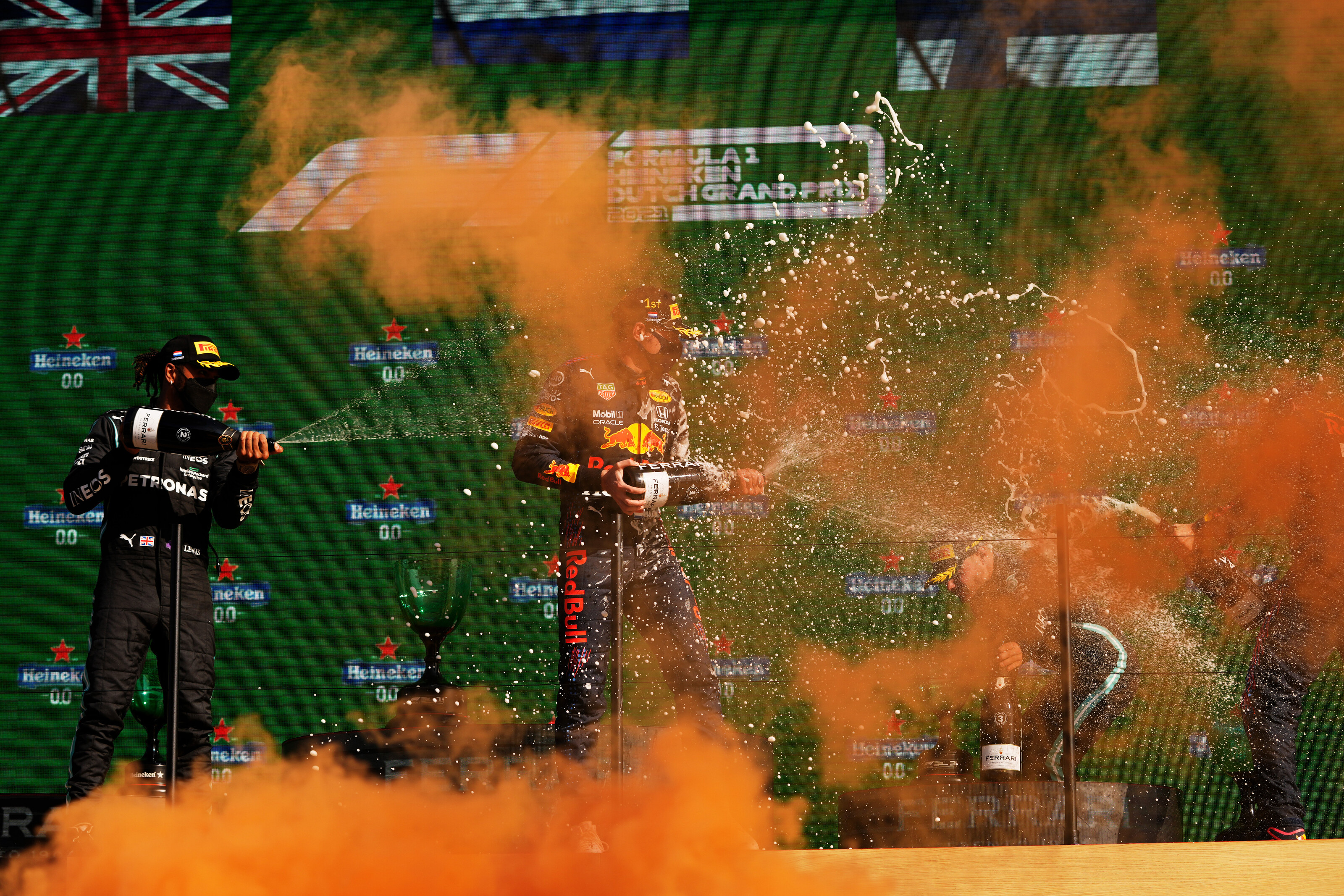 The first Dutch Grand Prix for 36 years was by no means a great race – but it was a great occasion, as Formula 1 returned to Zandvoort and a 65,000-strong ‘orange army’ of partisan fans got the result they craved. Home hero Max Verstappen was utterly dominant in his Red Bull-Honda, even if Lewis Hamilton and Mercedes-AMG threw all they could at their rivals.

Pre-race pleas to leave the orange flares at home went unheeded as Zandvoort rocked to a wonderful party atmosphere. At 4.24 kilometres in length, the circuit in the sand dunes pales in comparison to the old sweeping circuit, but the place still offers a challenge to F1 drivers, bites when they get it wrong and now features two banked corners that add spice.

On Saturday, Hamilton came close to spoiling the party with a great qualifying lap that was just 0.038sec off Verstappen’s pole position, and again on Sunday he gave everything to overturn the fairy-tale result. Valtteri Bottas riding shotgun in the second Mercedes kept Red Bull on its toes, the Brackley-based team opting for a split strategy that meant for all his dominance Verstappen never had it easy. Hamilton pitted early to commit to a two-stop strategy, his rival coming in a lap later to cover the ploy – which is all he had to do all day. But Mercedes switched Bottas to a one-stopper in the hope he could at least give Verstappen a headache. But when Max closed down the Finn, who then made a small mistake at the chicane, the Red Bull was through before the #77 Merc could even pit. Bottas delivered his team good points in third, but he cut a subdued figure at Zandvoort. George Russell is expected to be announced as the new Mercedes driver for 2022 any day now.

After an early round of second stops, Hamilton made it clear on the radio he wasn’t happy with the strategy he’d been given, but typically he knuckled down to keep Verstappen in reach. But at a circuit where overtaking is so difficult, there was never really much doubt how this one would end. In the closing stages, Mercedes gave up the chase and pitted Hamilton for a fresh set of soft tyres with which he claimed the extra point for fastest lap. Intrigue flared when Bottas, who had also been called in, was told his fresh set of Pirellis was a safety precaution and that he shouldn’t go for fastest lap, that he should leave it to Hamilton. Piqued by the call, Bottas set two fastest sector times before obeying a radio order from chief strategist James Vowles to back off. He did – but still set the fastest lap! An awkward situation was eased because Hamilton’s final lap turned out to be faster. The result swings the championship back in Verstappen’s favour, from a three-point deficit to a three-point lead ahead of Monza next weekend. As Hamilton’s engineer Pete Bonnington said on the radio after the flag, Mercedes has every hope of hitting back at the Italian GP as this tight title duel continues to dance on a knife edge.

Pierre Gasly finished where he started with a fine fourth for AlphaTauri, ahead of Charles Leclerc’s Ferrari. That old warrior Fernando Alonso put in another stirring performance for Alpine, getting the better of team-mate Esteban Ocon on a hectic first lap and then grabbing sixth from Carlos Sainz Jr on the last lap. Sergio Perez went some way to making up for his poor qualifying by rising to eighth from the back, having taken a penalty for an engine change ahead of the race. Great effort though it was, Red Bull could have done with ‘Checo’ making it an equal fight with the Mercedes pair up front. Ocon was ninth, while Lando Norris claimed the final point after a difficult weekend for both himself and McLaren.

It was good to see Robert Kubica back on the grid for the first time since Abu Dhabi 2019 as the Pole subbed for Kimi Räikkönen, who had tested positive for Covid. The one-time grand prix winner finished 15th, just behind Alfa Romeo team-mate Antonio Giovinazzi. The Italian is fighting for his F1 future right now and qualified a fine seventh, but a puncture contributed to a disappointing race. As for Zandvoort’s return, there was some overtaking as a number of drivers made daring moves on the outside line at Tarzan (Turn 1). But it was always going to be tough – just as it always was at the old circuit. Still, the track’s old-school intensity and the buoyant atmosphere made this a special weekend, especially as Verstappen became his nation’s first home winner of a grand prix. Overall, it was good to be back.