The Mini is often presented as the genesis of the front-driven car, but much of the mechanical make-up used by manufacturers nowadays derives from an all but forgotten Fiat.

If I asked when you last spotted a Fiat 128 on the road, assuming that you could recall what that car looked like, you’d likely be hard-pressed to remember. But despite the 128’s virtual obsolescence, beneath the boxy styling of this innocuous-looking car lies the technological template for today’s Mazda 3, Honda Civic, Ford Focus, Fiat 500, Hyundai i30 and pretty much all other front-drivers from the past 50 years – including the current Volkswagen Golf, which you see dwarfing the 128.

Why have we brought this pair together? To find out if the mechanical lineage that links them can still expose fundamental similarities in the way that each drives. We’ve chosen the Golf specifically because there’s a historic connection between the 128 and the original Golf from 1974. In 1969, when Fiat launched the 128, Volkswagen had decided that its long-in-the-tooth Beetle needed replacing and opted for a FWD platform for its successor. Giorgetto Giugiaro was commissioned to design the body, and on his first visit to Wolfsburg in 1970 (the year in which the 128 won European Car of the Year), he found a completely disassembled 128 in the research department, with every component carefully numbered and labelled.

So why were Volkswagen’s engineers paying so much interest to the prosaically styled Italian car when it didn’t appear to introduce any groundbreaking innovation at launch? The reason was that the 128 was the first mainstream FWD car that successfully brought together all the latest contemporary technology – particularly in its drivetrain and chassis – that not only made it a thoroughly enjoyable car to drive and be a passenger in but also signposted the most costeffective and logical way for a large manufacturer to exploit the growing trend towards FWD machinery. No other car on the market could beat the 128’s space efficiency, despite its diminutive 3.8-metre length and 1.6-metre width. In all, 80 per cent of its footprint was devoted to people and their luggage, thanks mainly to its transversely mounted engine and FWD layout that, unlike the original Mini of a decade before, positioned the gearbox at the end of the engine, rather  than below it. This meant that each component had its own uncorrupted oil supply, with benefits to outright power, durability and gearshift speed and quality. In addition, the system prevented fewer losses through the transmission (it was estimated that 38 of the 128’s meagre 41 kilowatts actually reached its front wheels), as well as avoiding removal of the engine if a clutch needed replacing.

The 128 also introduced an electric thermo-controlled cooling fan, behind a front-mounted radiator (the Mini’s was side-mounted, due to its crank-driven fan), allowing quicker engine warm-up, less noise and more efficient cooling overall. Dante Giacosa, Fiat’s legendary director of engineering and the father of the 128, was faced with significant challenges configuring its powerplant this way, leading to still more technical solutions that arecommonly in use today. MacPherson struts were used to liberate enough space for the engine and gearbox and unequal-length driveshafts were a necessity, again because of the units’ width. Normally, such a design could create torque steer under acceleration, but Giacosa cleverly engineered shafts of differing diameters, thereby equalling their torsional stiffness and reducing, if not eradicating, this tendency.

The front end’s struts and lower wishbones were mirrored at the rear of the car but suspended by large transverse leaf springs, which neatly doubled as an effective anti-roll bar. According to legend (and somecheesy period Fiat adverts), Enzo Ferrari drove a 128 as his everyday wheels (his company having been consumed by the Fiat empire in 1969). The relationship between the two companies also led to Aurelio Lampredi – the mastermind behind some of Ferrari’s most epic Formula 1 engines from the 1950s and 1960s – designing the 128’s high-revving, over-square, ultratough 1116cc unit. This included yet more elements that, while not unique to the engine, became part of a must-have package for most mainstream manufacturers.

A single overhead camshaft is common today, but it was viewed as cutting edge when seen in the everyday 128, offering a greater operating range for an engine that went on to be used in multiple performance applications and increased in capacity by up to 40 per cent before production ended.

The unit also employed a toothed rubber timing belt instead of a chain, meaning greater refinement, albeit with less longevity. Completing the package were front disc brakes and rack-and-pinion steering – almostde rigueur now for any front-driver.

Now for full disclosure: the Pippin Red 128 you see here – a facelifted 1977 model with an uprated 1300cc engine – belongs to me, having been in my family from day one, replacing an earlier launch model that my dad bought new in 1970. But quite a few Golfs have also passed through my hands over the years, too. Either way, the Golf – in name and basic formula – is still with us, while the 128 left our shores 40 years ago. In short, I have respect for both. As you can imagine, viewed objectively, 44 years of evolution in car design and engineering has wrought seismic differences between these two. The Golf is in eHybrid guise, its 1.4-litre turbo petrol engine paired with a 81kW electric motor to deliver a total of 150kW – more than three times the 128’s 60bhp The Golf is nearly twice the 128’s kerb weight (1590kg versus 823kg), but its power-to-weight ratio of 94kW per tonne is still substantially more than the 128’s 54kW per tonne.

The Golf is also a whopping 428mm longer and 200mm wider than the 128. None of this is remotely surprising given the huge advances in safety, dynamics, performance, convenience and economy that havebeen made since the first Golf, let alone the even older Italian car. So it’s no great shock that, despite their hugely different weights, outputs and dimensions, the two cars do align in the way they drive, although you really have to drill down into each one’s dynamic core before you find the similarities. That the 128 is front-driven is more immediately obvious from the get-go, with its sweetly weighted, unassisted steering and instant positive reaction to every change of direction. It’s not kart-like in the way it steers, à la Mini or its bigger-selling contemporary, the Austin 1100/1300, but it has the same inherent precision, sure-footed grip and straight-line stability that became the hallmark of most cars with a driven front axle.

The Golf, by comparison, uses an electrically controlled and power-assisted steering rack that, along with five decades’ worth of continual refinement to suspension and sub-assemblies, tends to maskwhich end of the car power is being transmitted to at normal speeds.

The fact is that the difference now between the way that FWD and RWD cars steer is nowhere near as marked as it once was. But add more speed and commitment and the same directional eagerness displayed by the 128 starts to shine through the Golf’s helm, too. Kickback through the 128’s wheel when you meet mid-bend imperfections is to be expected from a car that drives and steers through the same axle, whereas this trait has been all but eradicated in the Golf. That said, the modern car’s 205-section tyres transmit camber changes more than the 128’s skinny 145s, but accelerate hard from a standstill in each car and it’s only the 128’s steering wheel that twitches through your hands in the lower gears. Clearly, Giacosa’s mission to quell torque steer has been successfully completed by Volkswagen (and many others, too).

Comparing cars from such different eras will inevitably throw up a wealth of contrasts, but while the Golf dynasty has moved on the front-wheel-drive game massively through successive generations, that vital 128 DNA found by Wolfsburg’s engineers remains just about intact in its latest iteration.

Are there any major differences?

Today’s Golf remains surprisingly faithful to the 128’s FWD template, and if you set aside the ensuing 50 years of refinements, there are just two areas in which it has diverged or been adapted for modern tech. First, the rear suspension of the 128 was fully independent, but on lower-powered versions of the Golf (not our test car, which has a multilink set-up) it’s by torsion beam – a more space-efficient compromise where high cornering forces don’t need to be countered.

The powertrain’s transverse layout has also been adapted, with the eHybrid’s clutches and electric motor sitting between the engine and dual-clutch automatic (DSG) gearbox, but all still in train.

Milestones on the FWD journey The 205 turned around Peugeot’s fortunes. With its trailing-arm rear suspension, it was a watchword for class-leading FWD handling, with lots of throttle-off oversteer on tap, too. Its refined and punchy diesel units were also benchmarks. With its ‘control blade’ rear, the Focus combined big-car comfort with a level of dynamic control that destroyed the competition in one fell swoop. Its cutting-edge styling added to the polish. The 156kW RS version is already a modern classic. 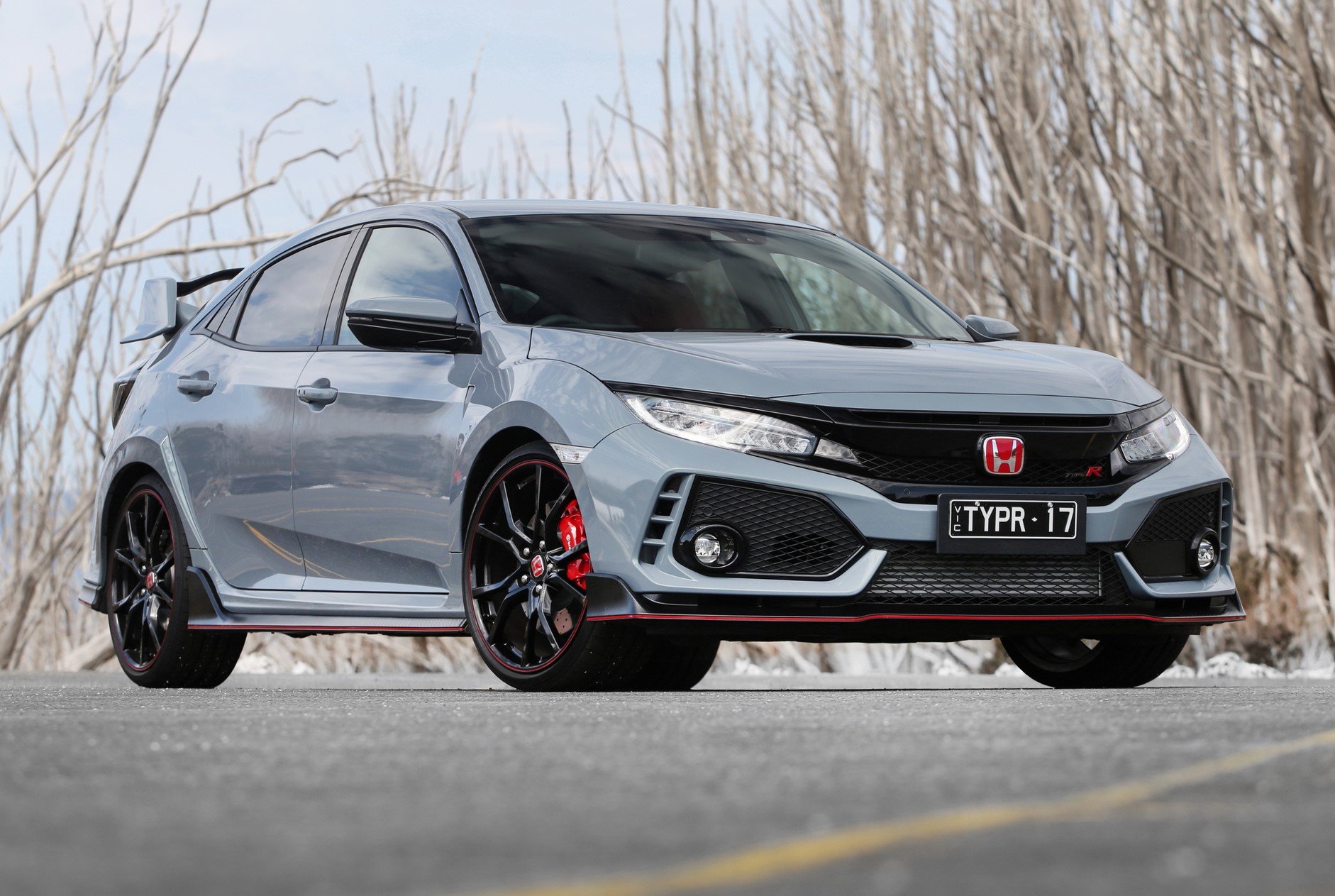 Who’d have believed 50 years ago that 225kW could be sent through a car’s front wheels? With 225kW, this hot Civic did just that, proving that ever-better differential and traction tech can stop unruliness.