Range-topping version of iconic sports car gets a host of key technical upgrades, including a new engine that makes it the quickest 911 yet. 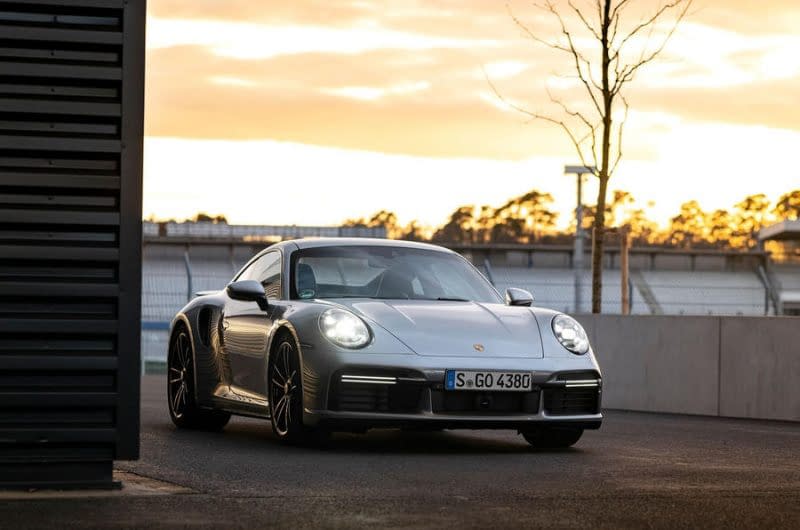 Among Porsche enthusiasts – well, any car enthusiasts, really – the combination of the number 911 and the word Turbo has long enjoyed cult status.

Back in 1974, Porsche redefined road car performance with the original 911 Turbo, fitting a turbocharged engine and an oversized rear wing to its signature model to create the legend that exists today. Ever since, the company has striven to refine the fundamental formula, even if there has been the odd change in philosophy along the way.

Almost half a century later, we now have the seventh-generation 911 Turbo: the 992. It replaces the facelifted version of the 991-series 911 Turbo that was launched in 2016 and comes at a time when Porsche, with a record number of new petrol-engined and electric models in the pipeline, appears to be very much at the top of its game.

In its headlining S guise, the new Turbo looks familiarly purposeful and muscular in the metal. Its lines clearly draw from the model it replaces, albeit with new detailing, most notably to the round LED headlights and new full-width tail-light assembly. 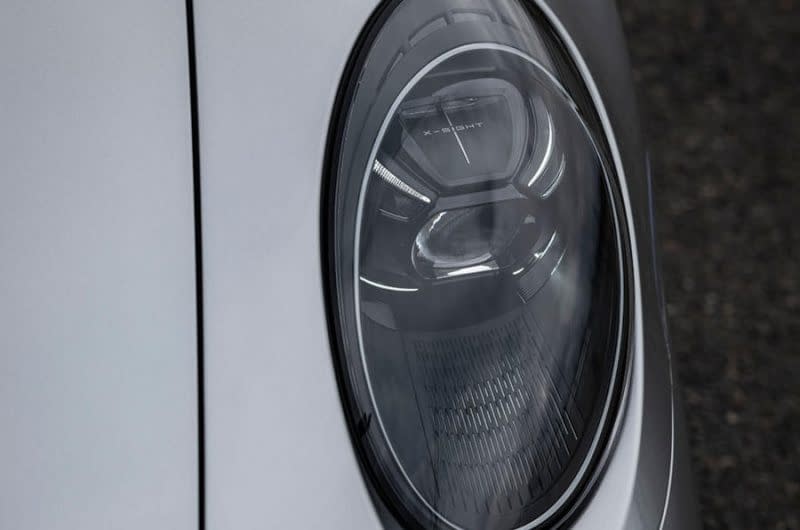 And yes, it’s wider than ever before – 48mm wider than the base 911 Carrera, to be precise. Although the 992 is based on the same platform as its predecessor, with a 2450mm wheelbase, its aluminium body has been widened to further accentuate the Coke-bottle form built up over more recent generations. The increase is necessitated by the adoption of a 42mm-wider front track and 10mm-wider rear track, together with, for the first time, the combination of standard 20×9.0in front and 21×11.5in rear wheels. 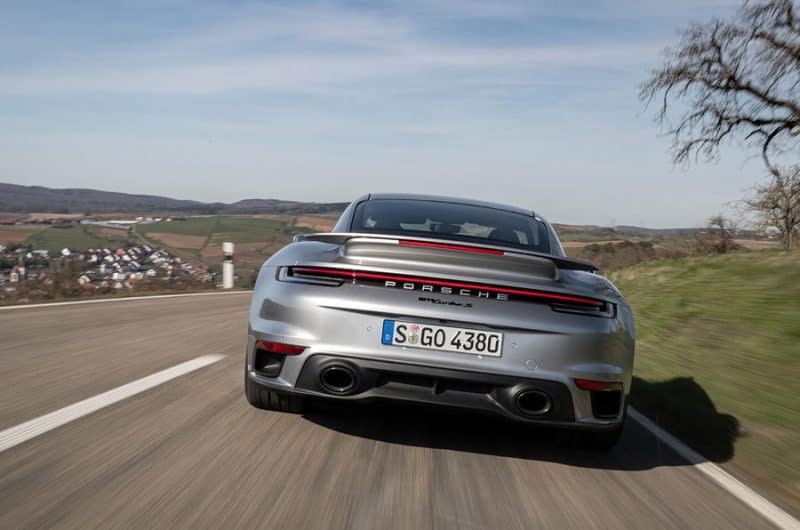 All up, the car is 28mm longer and 20mm wider than the old Turbo S, at a respective 4535mm at 1900mm. Despite a number of weight-saving measures, including new optional composite glass that’s claimed to weigh some 4kg less than the glass used before, it has also gained 40kg, giving it a kerb weight of 1640kg. That’s due mainly to the introduction of a more advanced dual-clutch automatic gearbox and other key developments that include new brakes and the larger wheels needed to accommodate them.

The aerodynamic functions have been reworked too. Together with the active front spoiler ducts brought over from its predecessor in a revised form, the Turbo S gets a reworked rear spoiler offering Speed and Performance settings, with the latter contributing to a 15% improvement in downforce. There’s also a new air brake function to increase drag at high braking speeds. 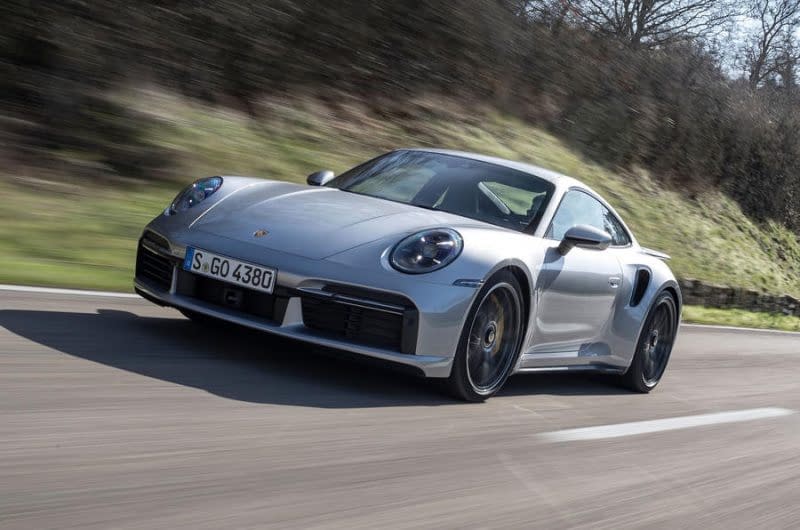 As before, buyers can choose a coupé or cabriolet body, the former of which we will concentrate on here. The 992 abandons the 3800cc flat six engine that has been a mainstay of the Turbo since the facelifted version of the 997 was launched in 2009 for an all-new powerplant that, despite giving away 55cc in overall capacity, offers greater power and torque than before.

There are no official engine output figures for the standard Turbo just yet. But in the
Turbo S, power has increased by 51kW to 478kW at 6750rpm, endowing the coupé with 128kW per litre and a power-to-weight ratio of 291kW per tonne. Torque also climbs by 50Nm to 800 between 2250 and 4000rpm. For perspective, that’s 37kW less but 50Nm more than the most extreme road-going 911 to date, the GT2 RS. 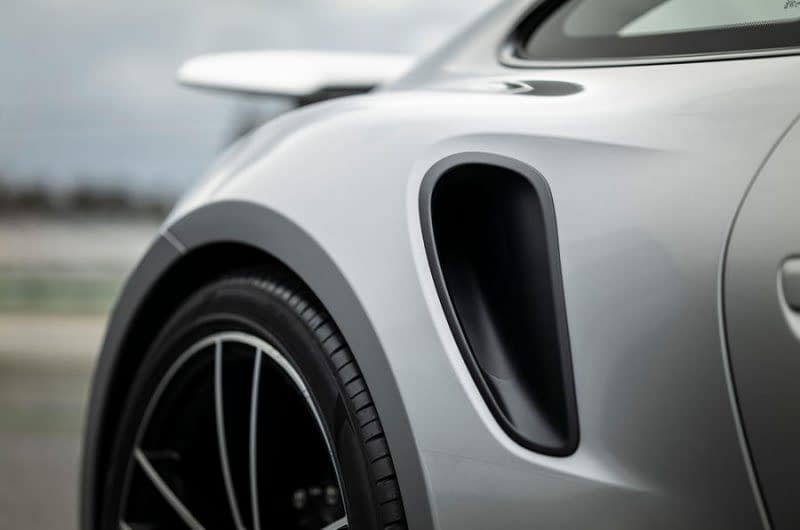 These added reserves, not least the increase in torque, have brought about an upgraded eight-speed gearbox as well as a new front differential for the multi-plate clutch all-wheel-drive system.

The cabin also represents a big improvement over the old model, with a new steering wheel hosting shift paddles and a driving mode controller, a high-definition digital instrument display, a 10.9in infotainment touchscreen and a neatly organised centre console. It’s all of a suitably high quality. Yet despite its increase in exterior dimensions, the 911 is still a strict two-plus-two, with 128 litres of luggage capacity in its nose. When the rear backrests are folded down, a further 264 litres of stowage becomes available behind the front seats.

There’s a lovely familiar meshing of mechanical clatter as the ignition fires. This engine may be new, but it continues to make all the right noises. At idle, the pulsating action of the horizontally opposed six cylinders hung out back drowns out the sound of the exhaust. However, that changes the moment you draw the stubby gear selector backwards and set off down the road. 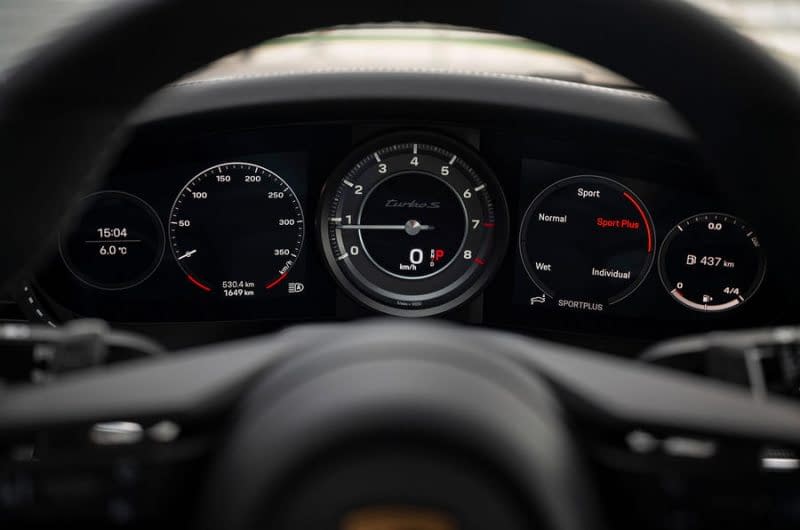 The new Turbo S is typically well mannered in Comfort mode around town. It’s not exactly quiet, but neither is it ever particularly raucous. There’s greater intent to the gravel-toned exhaust note than before, thanks to the availability of an optional sports exhaust – as fitted to our test car – for the first time. However, it’s still relatively subdued.

Until you call up Sport mode and plant it, that is, at which point it unleashes a gloriously deep blare that’s less guttural but every bit as captivating as those of Porsche’s naturally aspirated powerplants. The remarkable thing – and this has been a key strength of the top-of-the-line 911 for years now – is just how amenable the car is. Threading though traffic and heading beyond the suburbs onto smooth-surfaced country roads, it really is as easy to drive as your average hot hatchback.

Only it’s in a completely different dimension as far as performance is concerned. The acceleration in lower gears is mind-numbing in its intensity. Porsche claims 0-100km/h in 2.7sec, a 0.2sec improvement over the old Turbo S, making this the fastest-accelerating series-production 911 yet. Yes, that means it’s quicker here than the GT1, GT2 RS and
GT3 RS. But we suspect that it will be even quicker, given that we recorded repeated 2.7-seconds sprints in the 991.2 Turbo S.

The savage low-to-mid-range thrust and ability of the all-wheel drive system to place it to the road with outstanding efficiency makes for explosive forward momentum, as exemplified in the 0-200km/h time, which has been improved by a full second to just 8.9sec.

There’s so much torque available that you can call up higher gears and surf the resulting potency well into significant three-figure speeds in one wonderful unbroken line of surging acceleration, aided all the while by the stunning straight-line stability brought on by 170kg of downforce at the claimed 330km/h top speed. Again, we suspect that 330km/h might be a touch conservative.

There’s no noticeable turbo lag anywhere, just one exceptional stream of urge from not much more than 1000rpm all the way to the 7200rpm ignition cutout on a loaded throttle.

The smoothness of the delivery and rapid action of the kickdown from the gearbox masks the improved response of the new engine, but it is there. This latest version of Porsche’s traditional six-cylinder unit isn’t rabid in the character of a flat-plane-crank engine, but there’s still added resolve to the way it goes about its business. That’s especially true at the upper end of its rev range, where it feels stronger and more determined than its predecessor. 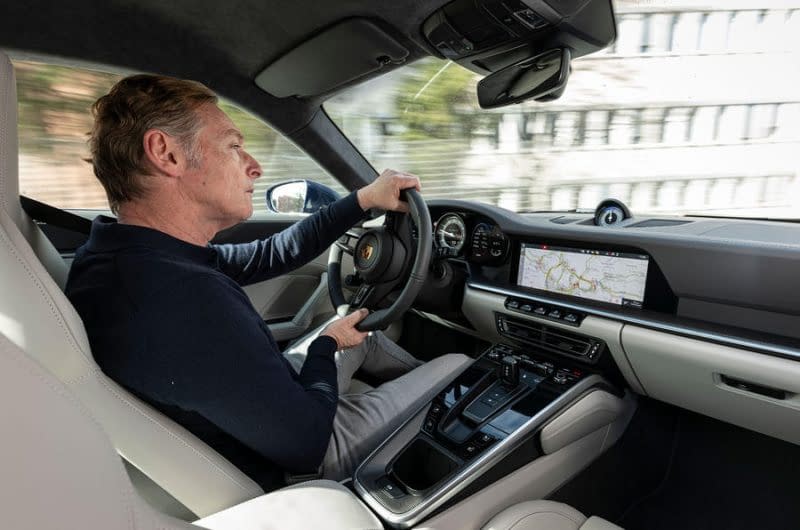 There’s more to the dynamic appeal of the Turbo S than just its straight-line speed, though, and that all starts with the steering. There’s a lovely slickness and immediacy to the speed-sensitive electromechanical all-wheel system.

The weighting remains consistent over a wide speed range, creating the sort of engagement that no recent Turbo S has managed to offer. In a bid to improve agility, Porsche has revised the steering action on the rear wheels, increasing the ratio by 6% for even sharper and more decisive turn-in traits than before.

For the first time, Turbo S buyers can specify optional sports suspension with a 10mm-lower ride height and retuned active roll compensation system among other detailed changes over the standard underpinnings. This is allied as standard to the Porsche Active Suspension Management system, which brings adaptive damping into the mix.

Also on the optional equipment list is a lift function that provides an additional 40mm increase in ground clearance on the front axle. The sports suspension breathes nicely over longer-wave undulations and remains superbly controlled over higher-frequency bumps, without the characteristic nose bob that affected previous generations, keeping the Turbo S well planted on all but the most badly pitted surfaces. This is thanks in part to the adoption of new helper springs that provide a preloading effect to the main springs for more controlled rebound.

If there’s a weakness, it’s the incessant tyre roar on anything but super-smooth road surfaces, especially from the rear end. Still, the tuning really is sweetly struck, bestowing the new model with adequately absorbent long-distance properties in Comfort mode and a firm but controlled ride in both Sport and Sport Plus modes. 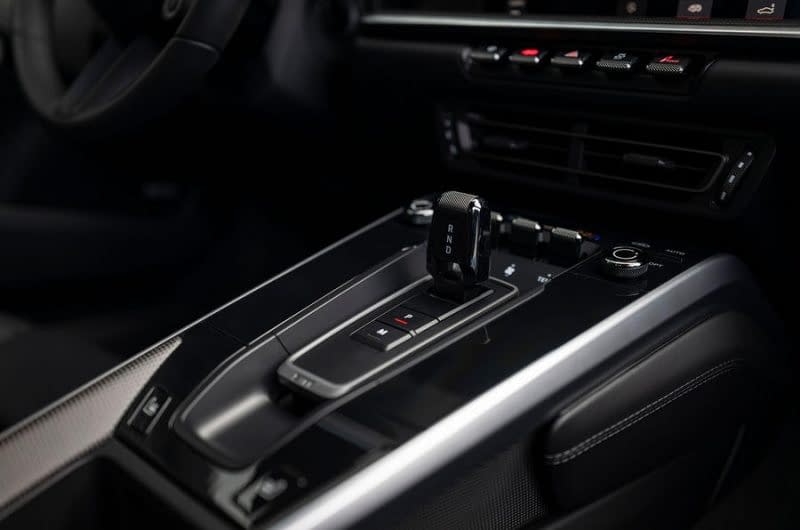 All this makes the new Turbo S, a car that makes well over twice the power of the original, imminently approachable. Yes, it’s absurdly fast, but the calmness of its ride and its otherwise superb resistance to pitch and dive under acceleration and braking is all the elixir you need to take full advantage of its exceptional grip, which now comes via a combination of standard 255/35-profile tyres at the front and 315/30-profile tyres at the rear.

The combination of this new rubber and the latest incarnation of Porsche’s all-wheel drive system, which uses a lighter and more rigid driveshaft and a single universal joint to the front wheels, delivers huge traction and purchase.

Tip the car into a fast corner and it displays exceptional body control, while remaining unflinching in its determination to hold your chosen line. The changes to the all-wheel drive system now allow up to 500Nm to be apportioned to the front wheels. The torque-vectoring effect at the rear is also improved.

Given the 911’s distinctive rear-biased weight distribution, it feels deliciously well planted and neutral from entry to apex and beyond. There’s a trace of steady understeer when you’re really on it, as you would hope for and expect from something capable of generating such high cornering speeds. However, unshackling the stability control system brings a degree of adjustability that enthusiast drivers may seek in tighter bends. The limits of adhesion are so high, though, that you would need to be on a race circuit to really explore the car’s true ability. 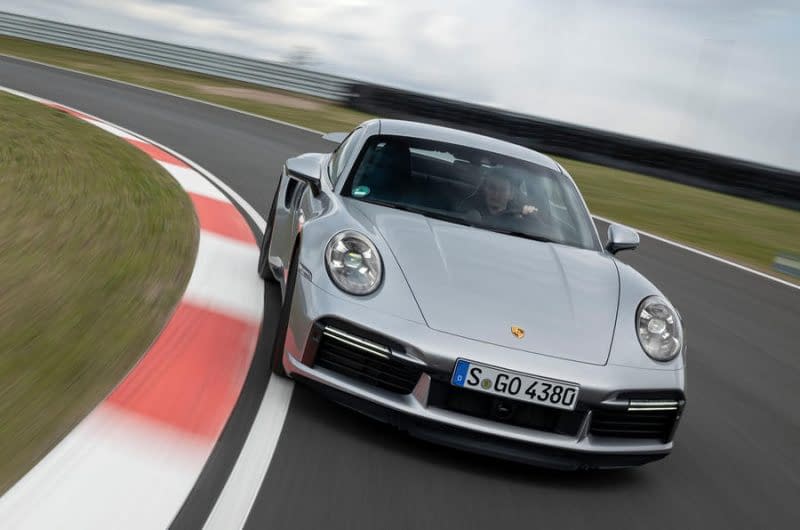 This also applies to the brakes, which now feature carbon-ceramic discs of 420x40mm at the front and 390x32mm at the rear in combination with huge 10-pot front calipers and four-pot rear calipers. They’re incredibly effective, providing reassuring bite in the initial degrees of travel and strong but progressive qualities as you add further pressure to the pedal thereafter.

The strength of the new Turbo S lies in the breadth of its repertoire: it eases and thrills in equal measure. It doesn’t quite deliver the same whip-crack reactions and at-the-wheel sensitivity of some competition-bred 911s, but what it lacks in sheer tactility is more than made up for in its speed and ability to swallow big distances at legal limits in relative comfort without ever needing to work hard at all.

It’s arguably the world’s most complete and versatile all-season supercar.