This is more than just petrol versus electric, it’s analogue versus digital, a rear-drive car with an internal combustion engine and a manual gearbox lobbed at an all-electric four-wheel-drive technology showcase without so much as a flappy paddle to cover its modesty.

You may also look at their relative specifications and wonder why we bothered. After all, one has four doors and the other just two. The Taycan is getting on for half a metre longer (almost all in the wheelbase), more than 10cm wider, nearly 8cm higher and, get this, 740kg heavier. There are entire cars that weigh less than that. Should we not be putting it up against something else instead, like a Panamera?

Well, maybe, and perhaps one day we will. But today this isn’t so much a comparison of cars as concepts. It is, I think, now broadly accepted that, rightly or wrongly and for good or ill, electric cars like the Taycan will replace pure ICE cars like the 911 and, in the context of the history of the automobile, not long from now. So how much further does the finest of the new breed still have to be before it’s just a better option for most people most of the time than the best that the traditional approach has been able to yield? In short, can revolution eclipse evolution? 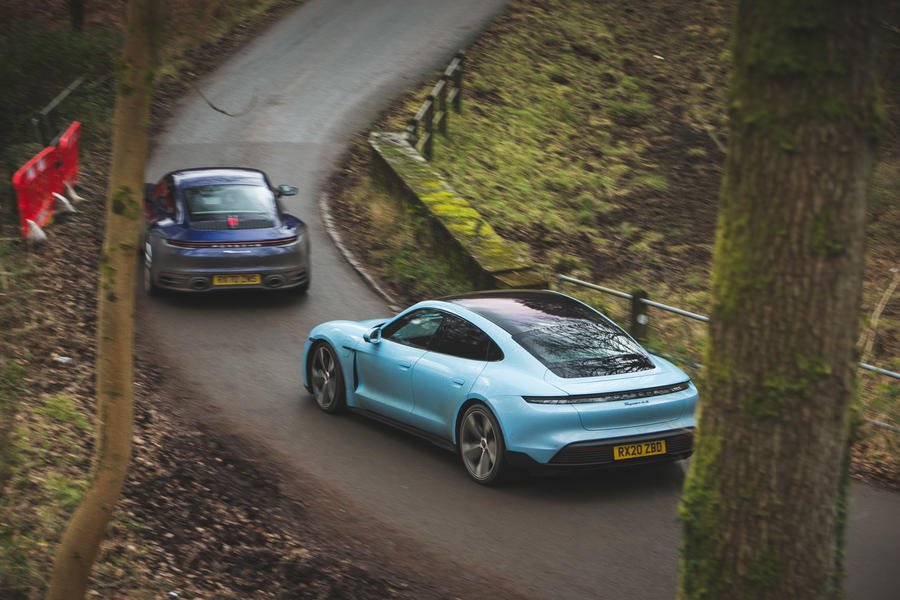 There’s another reason they’re here: road testers tend to think in quite binary ways before putting one car up against another; customers don’t. I recently had a conversation with someone who couldn’t decide whether to get a new Range Rover or a second-hand McLaren. And I’d bet plenty that there are long-term 911 lovers out there who, for reasons of tax efficiency, a growing family or concern for the environment or their personal image, are right now wondering whether now is not the right time to trade in their rear-engine flat-six coupé for something a bit more spacious, refined, environmentally aware, cool and, well, electric. Bear in mind how close they are in price and performance – especially once you’ve added the essential Performance Battery Plus to the cost of the Taycan 4S – and suddenly what we’re doing here may not seem so strange after all. I drove the 911 first because I wanted that grounding, an absolute datum point on where the world’s greatest sports car is in 2021 before tackling the Taycan. And it’s in a very good place. Now that it can be had with manual gears, pretty much the only diversion from the purist’s perfect car wishlist are the two turbochargers attached to its 331kW, 3.0-litre engine. But so little is the lag, so smooth the power progression, so sharp the throttle response and so great the sound that I’d challenge anyone to tell me those two puffers don’t actually add to the driving experience. Even though some say it has become too large, that’s not how the 911 feels within. That intimate driving environment has been preserved, my only significant complaint being that the now (almost) entirely digital dashboard doesn’t suit the character of the car. I’ve driven enough of them sufficiently far on ample occasions to know that if I were to come around to that way of thinking, I’d have done so by now. It looks as out of place here as would a suite of mechanical clocks in the Taycan.

But the rest remains breathtaking, and this is a very standard 911. Save a 10mm suspension drop, there’s nothing on this car to aid it dynamically – no ceramic brakes, active roll bars or four-wheel steering – nor does it need any of it. Drive it hard on a decent road and you will find a car that’s so intuitive to operate, so well bolted to the road surface, that it’s all a hack can do not to resort to hoary old clichés about man and machine in perfect harmony. So I’ll put it this way: where so many set out to impress their drivers, the 911 seeks only to involve them, which is a far more precious and special commodity. It’s why, as we progress in what some may regard as the wrong direction, we drivers grow closer to it instead of becoming more estranged. 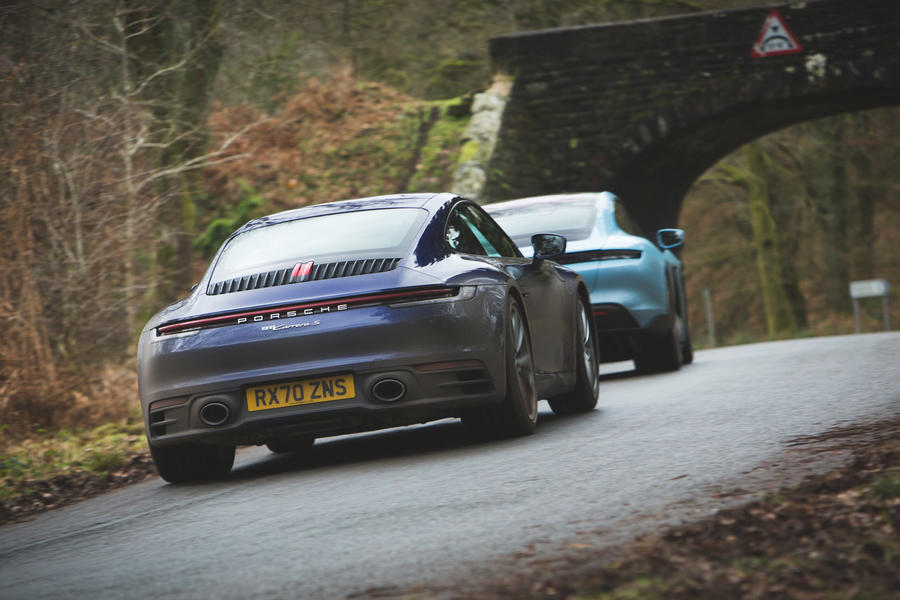 And it does it at all speeds: the 992’s greatest trick is to engage the driver from the outset, something the standard 991 never quite managed to do. And manual gears serve only to provide further immersion into its world. Would I swap them for a PDK? I would not.

But when it comes to trickery, the 911 is a kid bought a Harry Potter wand for Christmas, while the Taycan appears to be the love child of Harry Houdini. Whatever the 911 does with whatever it has with which to do it, the Taycan is more remarkable by far.

The first trick is to convince you that it’s more powerful than it is. The headline says 420kW, but in fact that’s only briefly available during a launch control start and then only if you’ve spent the extra on the big battery. In normal use, a standard Taycan 4S has 320kW, less even than the 911. The second trick is it still doesn’t feel that way. Naturally, all performance figures are recorded using launch control – so with 66kW more than is usually available even with the big battery – yet that 4.0sec 0-100km/h dash feels entirely plausible. And remember this is the slowest of the three Taycans on sale. The reason why actually has less to do with power and more to do with torque or, more specifically, torque delivery, which is instantaneous. So while its real-world power-to-weight ratio isn’t in the same street as that of the 911 (163kW per tonne versus fully 224kW per tonne), up to speeds that don’t directly threaten your licence or liberty, you would swear the Taycan were as fast. But it’s cleverer than that. Way more clever, in fact. It doesn’t just seem faster than it is but smaller and lighter, too, and that’s a far harder trick to pull off. Now, this Taycan did have rear-wheel steering to ameliorate the worst aspects of its vast, near-three-metre wheelbase, but that alone can’t explain how it feels so agile and accurate, so keen to change direction, so responsive in your hands. At times, it doesn’t even feel like magic but something closer to witchcraft. It will sit on the 911’s tail quietly and happily and require a fraction of the effort from the driver to do it. You imagine the 911 driver managing the revs, endlessly stirring that stick, toiling away while you sit there relaxing in the silence, allowing a thin smile to spread across your face at the thought. And the only problem with that is the ear-to-ear grin on the face of the person driving the 911. The Taycan may be as quick, it may be able to pull the same amount of g-force in a corner while, remember, accommodating four average-sized adults in adequate comfort, even if the boot is too small for their luggage. What it can’t do to remotely the same extent is that small but crucial thing we talked about earlier: involve the driver. And the magic works only up to a point. I’ve noted that the 992’s singular skill is to involve from the outset, but it just keeps on getting better all the way to the limit. By contrast, the Taycan is never as involving as the 911 at any stage, and once you really start to boss it along, it starts to show its size and weight just a bit. 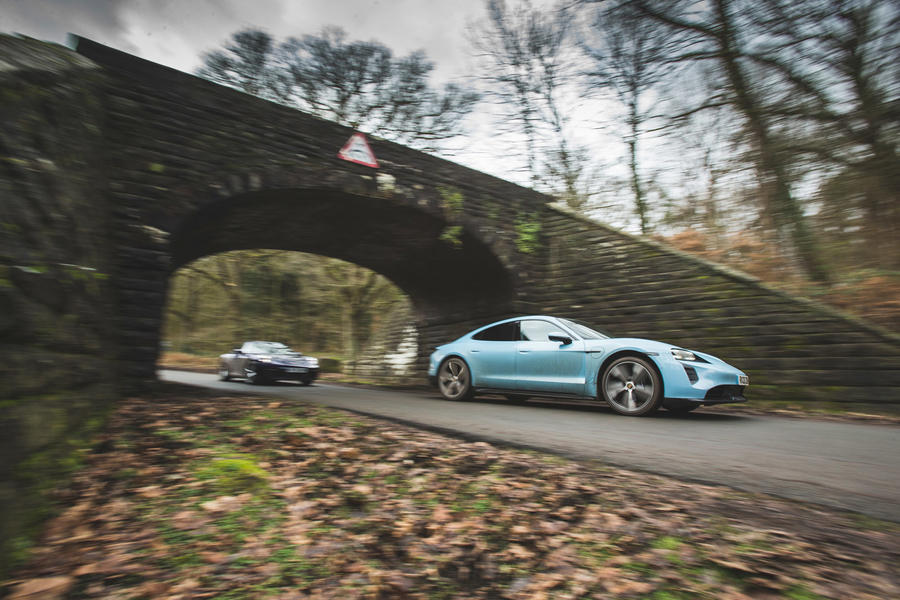 The point is that even were that not the case, the 911 would remain the clear choice for all those who love to drive. The Taycan is better than the bare numbers (especially that 2220kg weight figure) would ever suggest, and it is in many ways the more impressive achievement as a result. It’s the world’s greatest electric car by a mile and the cleverest automotive conjuring trick on sale today. I more than admire and respect the Taycan; I really like it, too. For many people for whom charging is not an issue, it might well prove the better bet. Just don’t for one minute allow all of that to let you escape with the idea that, as a thing to drive, it’s some kind of post-modern 911. It’s not, and it never could be.

Could the 911 ever go electric?

Not any time soon, if Porsche sports cars line director and therefore the current ‘Mr 911’, Frank-Steffen Walliser, has anything to do with it.

“The 911 will be the last Porsche to become electric,” he told me last year, “coming hopefully after my retirement so I’m not responsible any more and no one can blame me… I will fight to let the 911 keep its engine.” 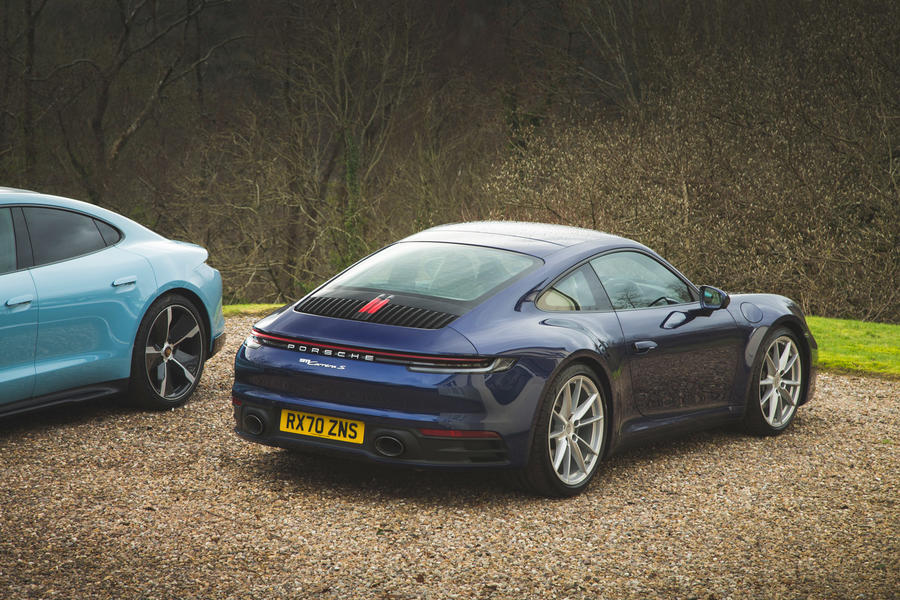 Even a plug-in hybrid 911 seems some distance away, meaning the 911 will cling to its much-loved but increasingly old-fashioned technology for a while yet. Although the current 992 series is known to be capable of becoming a hybrid, Walliser isn’t keen on the inevitable side effects, including the effect on the car’s weight and luggage capacity and even its shape.

“If you wanted to make such a car, it would be easier to make a completely new car,” he said.

Given the 992 was introduced only in 2019, that suggests a hybrid is unlikely before 2026 at the earliest.