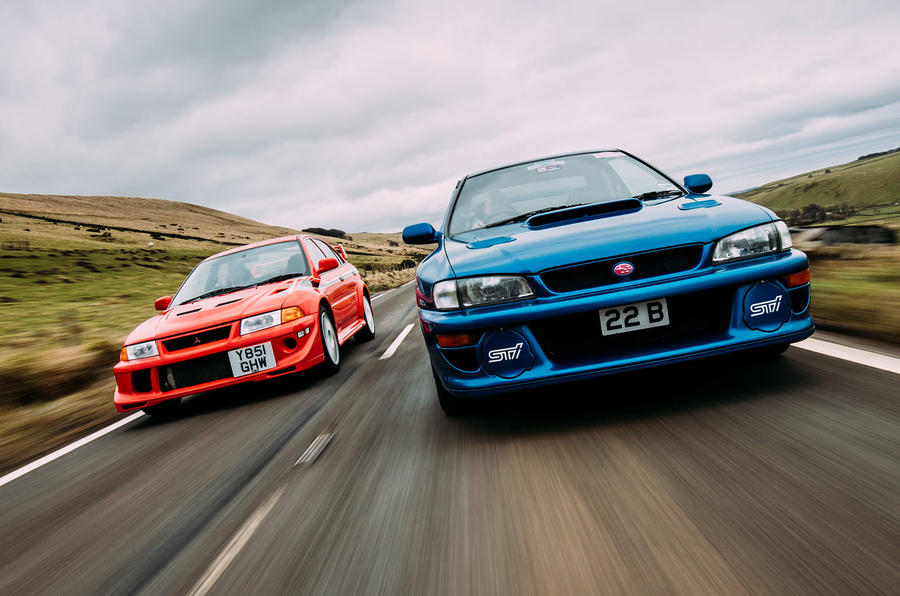 Later derivatives of the Mitsubishi Evo and Subaru Impreza would get faster and more powerful. They would become more technologically advanced and, in every measurable or objective way, they would get better.

Right here, though, is where they peaked. Launched within a couple of years of one another from 1999, the Lancer Evo VI Tommi Mäkinen Edition and Impreza 22B STi are, by general consensus, the pinnacles of their respective breeds. They are the apex all-wheel-drive rally refugees.

They hail from that five-year spell from 1995 to the turn of the century during which Subaru and Mitsubishi dominated the World Rally Championship. The Evo VI TME and Impreza 22B STi capture a moment in time and preserve it in aspic. But is there more to these cars than a cloying, bobble-hatted sentimentality? Box-fresh examples of both, the best roads in the Peak District and a blessedly dry day in late January are all we need to tell us everything we want to know. 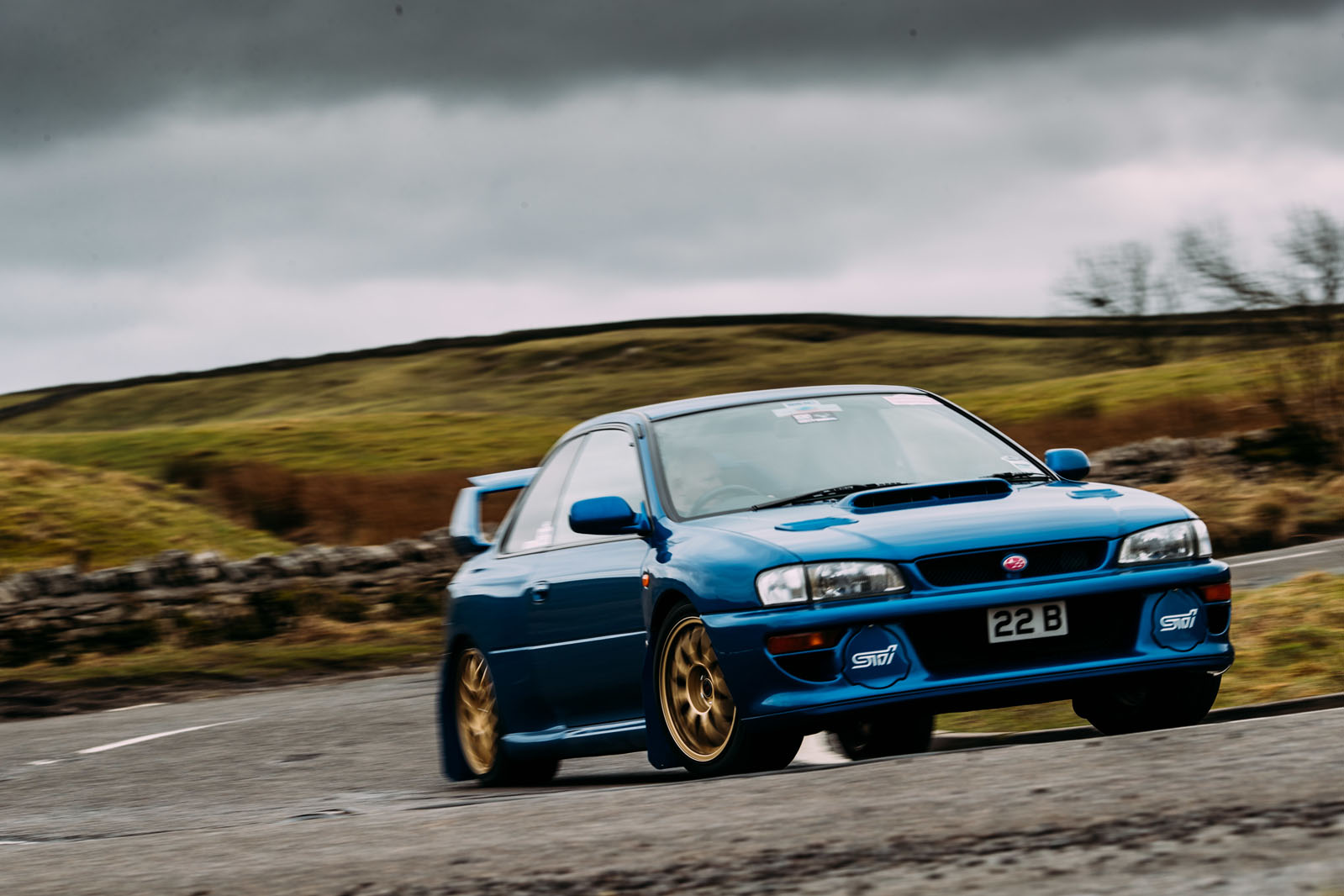 First, the history lesson. Early in 1998, Subaru unveiled a limited-edition version of the Impreza WRX STi. Built to celebrate both the marque’s 40th anniversary and its third straight WRC manufacturers’ title, the 22B STi was billed as the production version of Subaru’s already-iconic two-door World Rally Car. With its swollen wheel arches, the high-rise rear spoiler and an 80mm increase in width, it was as close to Colin McRae’s rally car as any normal punter was ever going to get. It wasn’t a homologation special but more of a road-going replica.

Between March and August 1998, 400 22Bs were built for Japan, with just 16 manufactured for the UK and five for Australia. The UK cars were modified by Subaru’s rally team, Prodrive, with a longer final drive, a miles-per-hour speedometer and revised headlights. Before Prodrive could get around to registering those 16 cars in the UK, however, more than 50 resourceful Subaru devotees had imported cars from Japan.

The ‘22’ in the model’s name referred to the engine capacity, which was increased from 1994cc to 2212cc. Officially, the turbocharged flat four developed 206kW, but the actual figure almost certainly 240kW. The ‘B’, meanwhile, stood for Bilstein, the damper supplier. 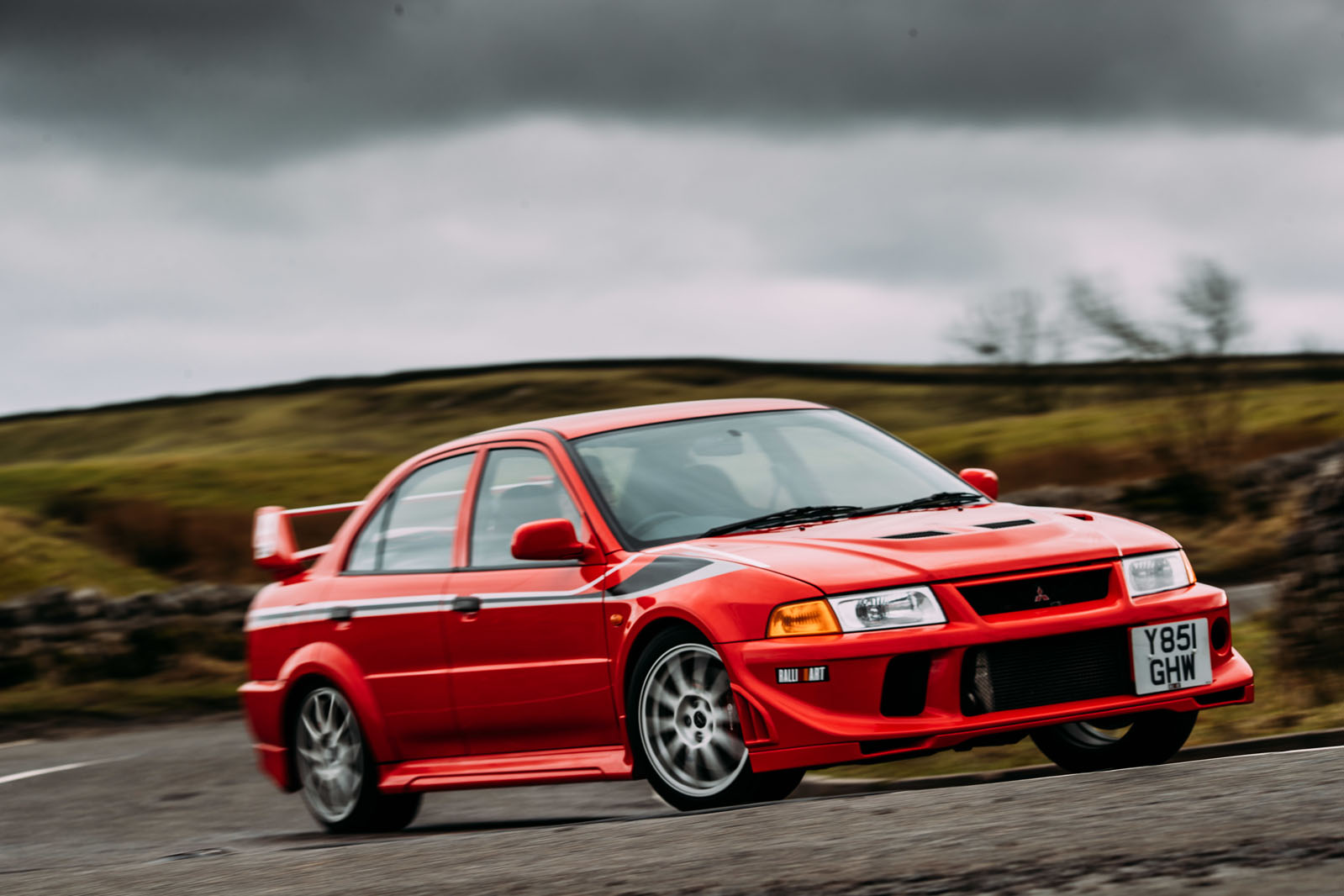 At least, that’s one explanation: whether by luck or judgment, 22B also happens to be the hexadecimal conversion for the number 555, the name of the cigarette brand that had long been Subaru’s WRC sponsor.

Other upgrades included a twin-plate clutch and 17in wheels, up from the standard Impreza WRX STi’s 16in ones. The car cost a shade under $132,000 in period. Little wonder most onlookers thought it a touch on the expensive side.

Mitsubishi’s retort followed in late 1999. With Finnish driver Tommi Mäkinen having wrapped up a fourth straight WRC drivers’ title, Mitsubishi launched a limited-edition Evo VI to celebrate. Over a standard Evo VI it got a lighter and faster-responding titanium turbo compressor, a lower ride height, a front strut brace and quicker steering. Many of the key components came from top-line suppliers, such as the Momo steering wheel, Enkei wheels, Brembo brakes and Recaro seats embossed with Mäkinen’s name. 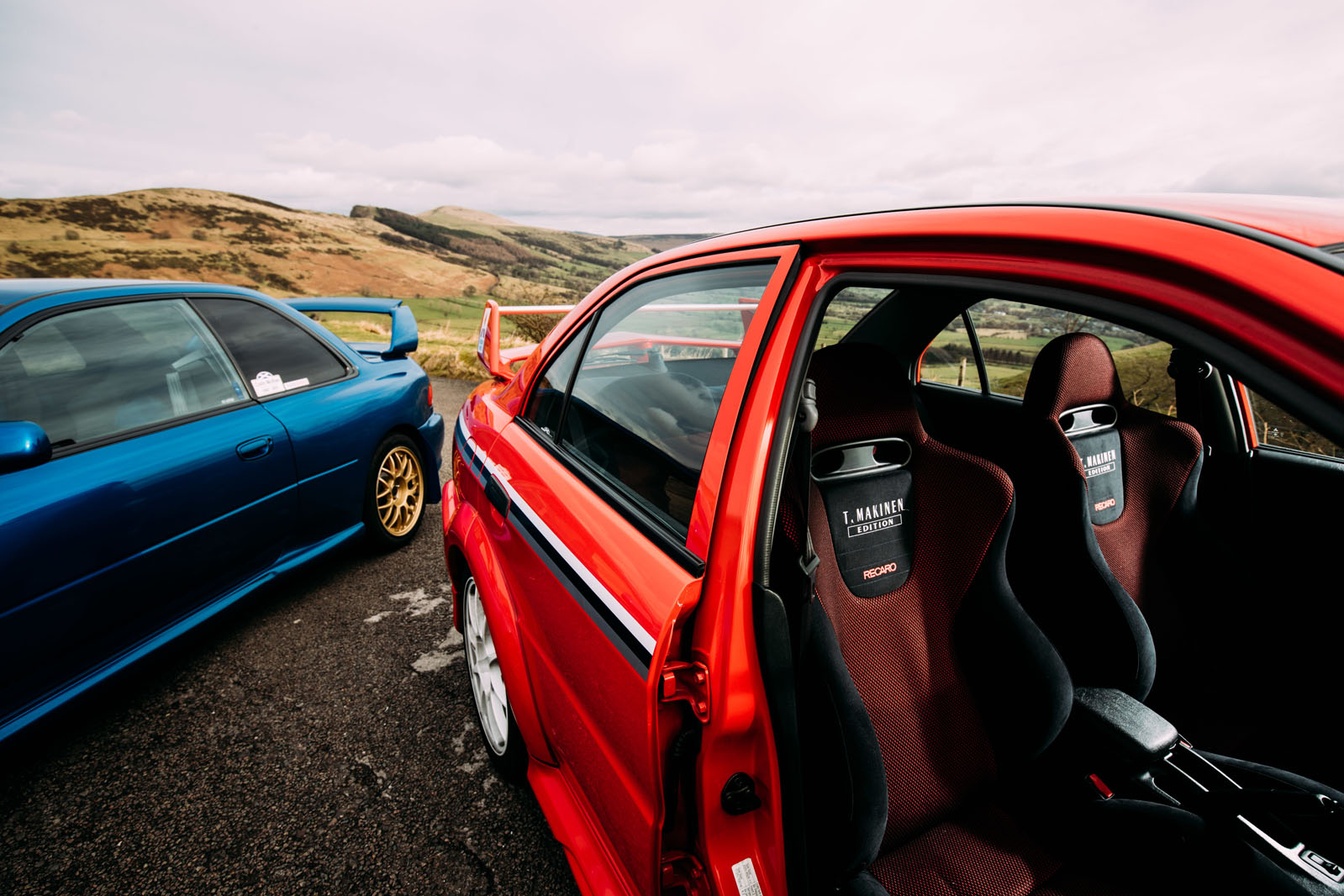 Over the two years the TME was on sale, more than 3000 were built, making it much more common than the 22B. At $65,000 new, the TME was more affordable than the gold-dust Impreza, too, and whereas the 22B was available in Sonic Blue or not at all, the Mäkinen was offered in white, blue, black, silver or, as here, in red with rally-inspired decals.

On a bitterly cold Tuesday morning, long before sunrise, the Evo’s engine fires to a noisy, busy idle. With the fluid in the dampers moving around like cement in a mixer at this chilly pre-dawn hour, the low-speed ride is tough and unyielding. The whole car drops heavily at one corner and then the next as you thud through potholes and over sunken drain covers, the entire structure rattling in protest. With some warmth in the fluid, the ride does settle, but the real change comes with speed. Beyond 80km/h or so, the car starts to plane and seems to levitate half an inch above the road. Rather than crashing and banging across the surface, it glides – all of a sudden becoming so wonderfully pliant and forgiving that you’d swear the suspension had been replaced wholesale somewhere between third and fourth gear.

Over a bucking, rollicking moorland road, the impression you get is of the body staying calm and composed as the suspension underneath works frantically to allow the wheels to rise quickly and fall in an instant, suspension arms nothing less than a blur. Unnatural features in the road surface do shunt their way through to the body, but all of the natural shape and texture that you get in a road by laying tarmac over a soggy moor is dealt with masterfully. You wouldn’t need to read the TME’s sales brochure to know its suspension had been tuned for a tarmac rally stage. When the road spears across the hillside rather than twisting and turning over it and you get into fourth and fifth gears, the Evo feels edgy. 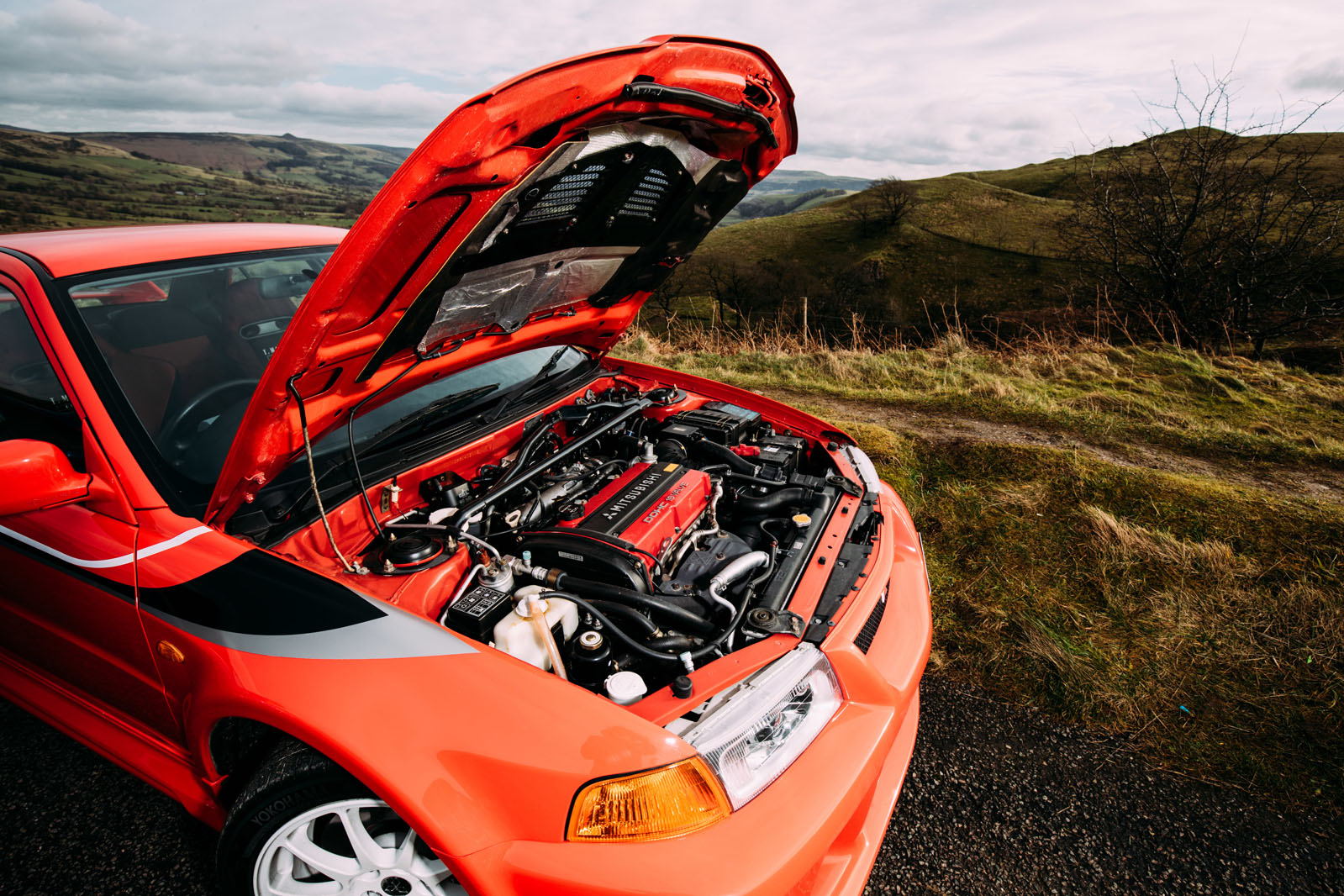 The chassis has such a hyper-agility about it that you constantly nudge the steering wheel this way and that just to keep it in a straight line; the car is so desperate to turn into corners that it tries to do so even where there isn’t one. It means that the TME will carry huge speed into a bend before it starts to push on, snapping into direction changes like a terrier chasing scents.

The limit of front-end grip is so well telegraphed that you hang the car right on the edge of understeer corner after corner, and although the steering does have a strange springiness to it right around the straight ahead, it actually becomes brilliantly crisp and detailed with a few more degrees of lock.

On dry Peak District roads, you’d never know much was going on in the rear differential. On a wet or low grip surface, you’d feel the Active Yaw Control shuffling torque here and there, but today it just seems as though the car has infinite drive and traction. The gearshift couldn’t be better and with five very tightly stacked ratios you bang through them like Manny Pacquiao throwing combinations. The car feels punchy on a wide-open throttle. Nothing much happens until 3000rpm, but from there the motor rips around to 7000rpm with a free-revving energy. There’s no doubt about it, the Tommi Mäkinen Edition is a very special car. 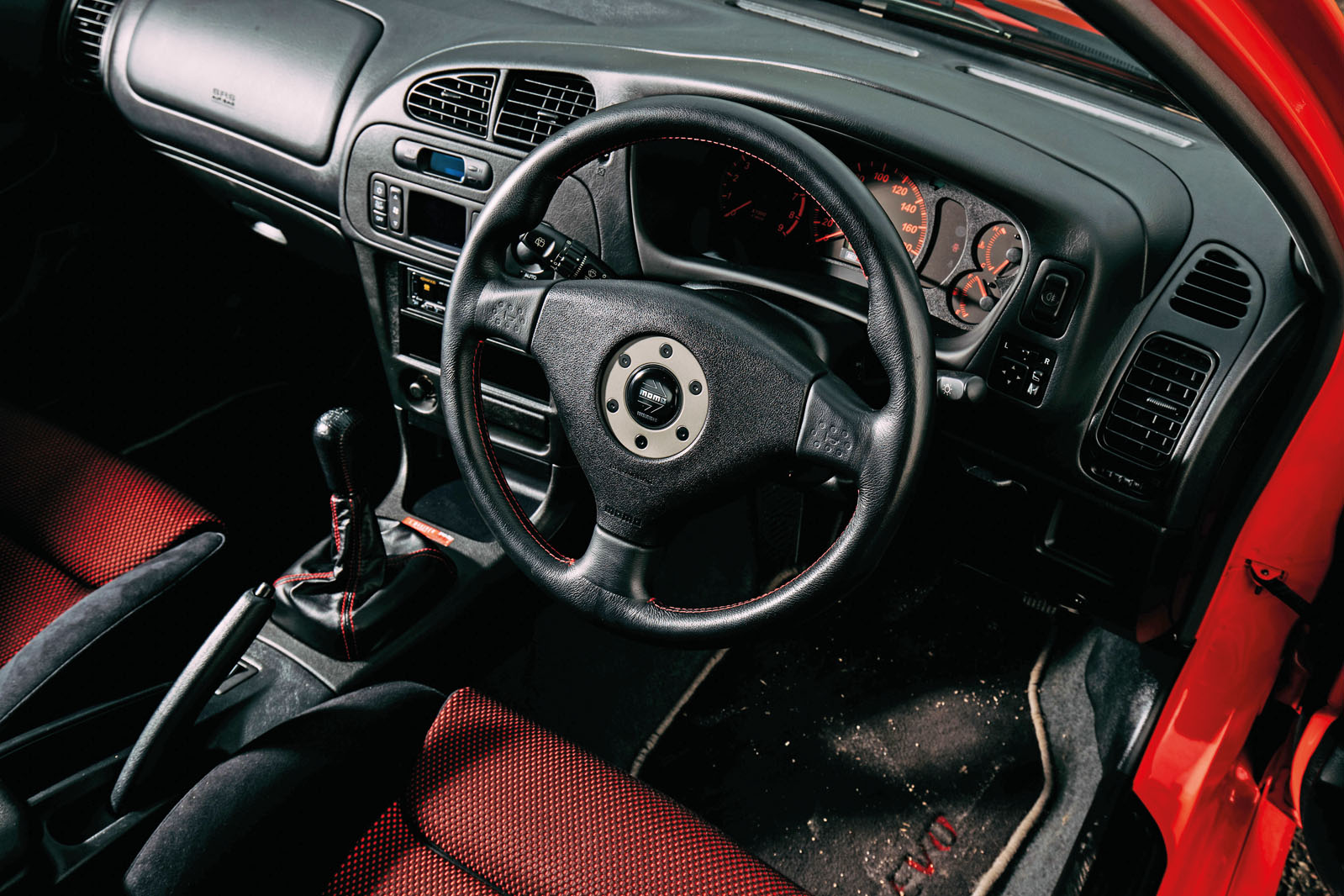 Parked alongside the Impreza, though, it looks less exotic. That two-door Impreza shape will always be so evocative, even more so with the 22B’s pumped-up arches. The Subaru has the much better seating position too; you sit lower, with the steering wheel presented to you within closer reach and at a more natural angle. The seats, meanwhile, wrap around your sides like a bear hug. You instantly feel connected to the car. Like the Evo it rides stiffly at low and medium speeds, perhaps a little less so, but it too is transformed at around 80km/h to become brilliantly fluid and composed.

There’s none of that straight-ahead steering stiction that troubles the TME. In fact, the 22B steers beautifully. Its quicker rack – there’s a small sticker at the base of the rear window that reads ‘Quick Steering’ – is perfectly suited to the rest of the chassis, which means you place the car with precision at every turn.

Whereas the Mitsubishi lives on its front end, the Subaru always feels more neutral. Turn into a corner and it instantly works both axles, leaving you suspended sweetly between them. It’s an addictive sensation and I don’t think I’d ever get bored with adjusting the centre differential torque split using the dial in the centre console. With 10 percent more displacement, the 22B’s engine instantly feels more muscular than the Evo’s. In fact, the mid-range is almost unnervingly strong, flinging the car up the road as though it’s been shot from a cannon. With the redline set at 7900rpm, the Impreza’s engine keeps on spinning willingly at the point where the Evo’s is crashing into its limiter. Subaru’s claim that this car had 206kW in period is a colossal fib. 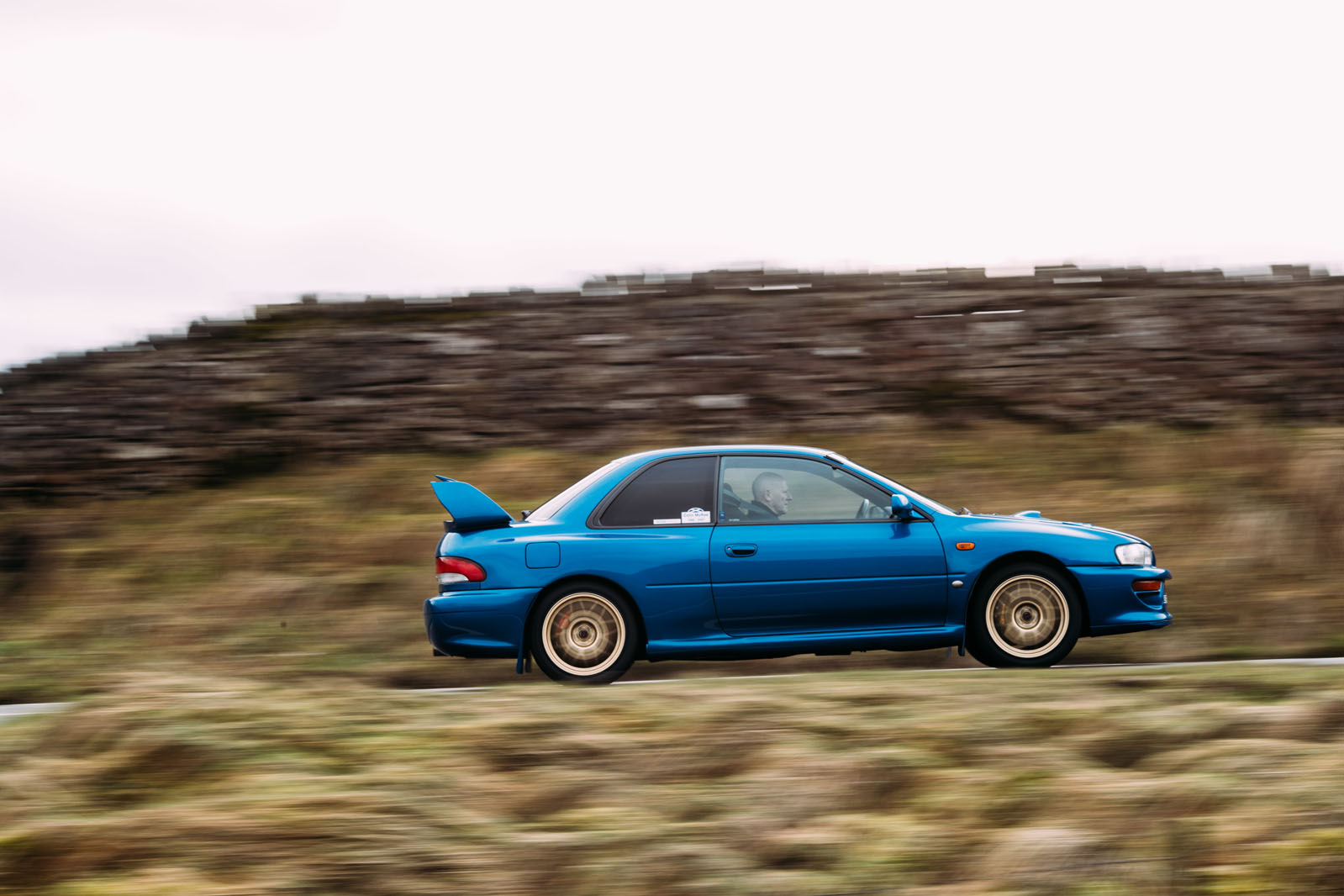 By a cigarette paper I prefer the Subaru, but that might be a legacy of having been a McRae and Richard Burns fan rather than a Mäkinen supporter back in the day. Objectively, there’s little between them. And while that nostalgic rally connection is undoubtedly a large part of the appeal of these cars, it isn’t the whole story. What’s more significant still is that the Tommi Mäkinen Edition and 22B STi really are the Mitsubishi Evo and Subaru Impreza at their very best.

Adrian Spencer, owner of the immaculate Impreza 22B STi used in our test, is the founder of Subaru specialist Adgespeed.

The company, based near Manchester, was established primarily to run Spencer’s own ex- Petter Solberg Impreza World Rally Car, but he says: “As a business, it needed to make money, so we also build and prepare rally cars for other competitors, as well as servicing and tuning road cars.

“The Subaru tuning scene is still fairly active. It’s been stable over the past 10 years. The older Imprezas are quite cheap now so we do see lots of cars that have been messed about with. People try to modify them without really knowing what they’re doing. We do lots of remapping, as well as engine rebuilds, fitting bigger turbos and so on.

“In recent years, prices have started to pick up and as the cars get older I think people will want to keep them in original specification. If you want to hold onto an Impreza for it to become a classic, it needs to be standard. I’ve seen people spend $100,000 tuning P1s, for example, and they’re worth less than an immaculate standard car would be.”

Whichever potent Impreza you’re considering, make sure it has been properly looked after. They all require regular servicing, with oil changes every 10,000km or so. Transmission and differential oil should be changed every 40,000km, while the cambelt should be swapped after 60,000km.

The turbo should always have been allowed to warm up and cool down gradually, so ask the seller what his or her driving habits are. The clutch, meanwhile, can wear out in as little as 60,000km. WRX (1994-99) – Now known as the ‘classic’ Impreza, the mid-1990s WRX is the cheapest way into fast Impreza ownership. With more than 150kW from its flat four and all-wheel drive, it still feels rapid today.

WRX (2006) – The second-generation Impreza looks fresher than the classic version and isn’t much more expensive. Even the later ‘hawk eye’ model, which is the best looking of the lot, is very affordable.

WRX STi (2007) – With 206kW, the WRX STi model is more in keeping with the image of a high-performance Impreza. There’s usually a very good selection of well-cared-for cars on the market at most times.

WRX STi 2.5 (2016) – The most recent WRX STis may not be as revered as some earlier versions, but they are more powerful and easier to live with on a day-to-day basis.