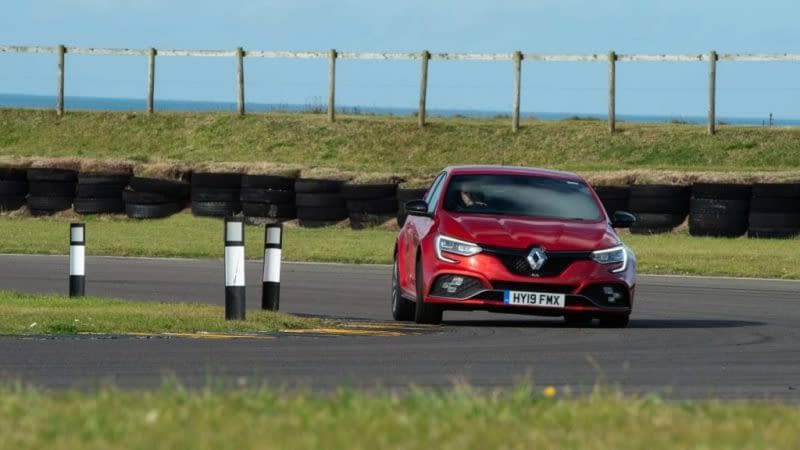 With a softer set-up than the Trophy and Cup, Renault Sport’s basic Megane could be the pick of the range

The Trophy-R might grab the headlines with its exotic specification and similarly exotic price tag, but Renault Sport’s products have often been their best at their most accessible.

With the latest-generation Renault Sport Mégane, that means ignoring Trophies and models equipped with the sharper Cup chassis, and starting with the Megane 280 and its standard ‘Sport’ chassis.

That presents a conundrum, as the best RS models have also rarely been the absolute entry point to their respective ranges – the outgoing Clio RS only really began to fulfil its potential in 220 Trophy form, while the bustle-backed second-generation Mégane was never up to much as the original 225.

If there’s a hope for the basic 280, it’s that the Trophy and Trophy-R have, for all their pace, struggled on some of Britain’s bumpier surfaces. With a softer set-up and a dose less aggression, could this make the basic RS the pick of the range?

Sitting at the bottom of the Renault Sport Mégane range doesn’t mean a shortage of firepower, even if the Trophy and Trophy-R offer more. The 1.8-litre turbocharged four-cylinder – much like you’ll also find in the Alpine A110 sports car – makes 205kW at 6000rpm, with a 390Nm torque plateau between 2400 and 4800rpm giving the RS a healthy mid-range.

Renault Megane RS cup chassis 2020 review – sharp, even when you don’t want it to be
A six-speed manual gearbox is standard fitment, though a dual-clutch automatic is also available. Renault’s EDC ’box is better than it used to be (it was one of our big gripes with the Clio RS) but despite our previous experiences with the Mégane’s slightly notchy manual, it’s still the one we’d choose.

With only 1407kg to haul around, making it among the lighter cars in this class, the 280 dispatches the 0-100kmh dash in 5.8sec (identical to a Honda Civic Type R), and bounces into a 250kmh limiter at the top end.

The Mégane RS shares its basic chassis with that of the Trophy and Trophy-R above it, but in standard ‘Sport’ specification it gets smaller wheels with slimmer tyres – 18 inches in diameter, with 235/40 rubber to the Cup chassis cars’ 19s with 245/35s – while you lose the Cup’s stiffer suspension and Torsen limited-slip differential.

It retains Renault’s ‘4Control’ all-wheel-steering set-up though, capable of turning the rear wheels in either the same direction or the opposite direction to the fronts depending on dynamic requirements, while the 280 also gets the hydraulic bump-stops used across the RS range.

This could be the Mégane RS we’ve been waiting for, and it’s been under our noses all the time. Where the Trophies we’ve driven until now have been exciting but also fidgeted, skipped and required concentration on rougher surfaces, the basic 280 flows, works with the surface and feels natural.

In many ways it feels like a front-drive version of the Alpine A110. The engine helps, of course – the 1.8-litre unit feels similarly free-revving, and the Mégane’s extra punch offsets the hatchback’s extra weight over its coupe cousin. It might be one of the best current hot hatch power plants – tack-sharp, a joy to spin to the limiter, great to listen to, and properly fast.

The manual gearshift is still quite notchy and its lever an awkward shape, but once you’ve learned it you can whip through changes as quickly as your arm will move, while the pedals are well-spaced for heel-and-toe. Good brakes, too, with better progression than the carbon discs of the Trophy-R.

But it’s the chassis that most evokes the Alpine. While it lacks the cast-iron body control of the Cup chassis cars, there’s still plenty of control, and on the smaller wheels and taller tyres its behaviour over smaller, higher-frequency bumps is calmer than before. There’s an Alpine-style bob and float over certain undulations, but it never gets out of hand and never feels like it’ll come back to bite you mid-corner.

The steering too has the easy, light feel of the A110. Its messages are subtle, but the response is up there with any current hot hatch. Even the four-wheel steering feels more natural, perhaps because the extra suspension movement takes the edge off those quick, unsettling movements at the rear axle. It’d be intriguing to try one with the Trophy-R’s simpler set-up, but there’s a risk that would compromise the 280’s lovely cohesive flow.

You’ll rarely want for more grip, with the Mégane’s wide track and 235-section tyres still giving the car great turn-in and fantastic mid-corner grip, and while traction out of hairpins or hard driving on track might show up the lack of a limited-slip diff, the 280’s front end is far from unruly.

As an aside, there was also unanimity among the team over the Mégane’s seats on our recent hot hatch megatest in evo 267. They’re better positioned and more comfortable than the Trophy’s Recaros, and the grippy cloth surface and squared-off bolsters look great, too.