The Seventies-themed camper was Toyota’s star truck, and it was joined by a TRD version of the new Tundra and a Tacoma exploration vehicle

Toyota brought a bit of nostalgia to this year’s SEMA show, in the shape of a Seventies-inspired campervan based on the Tacoma pick-up truck.

It’s called the Tacozilla Tacoma Camper, and it pays a faithful tribute to the Toyota Hilux campervan of the 1970s and 1980s – right down to the brown-and-yellow decals. Toyota says its goal for the truck was to make a campervan that “could go anywhere on the planet”.

So, it has lifted suspension and knobbly tyres, as well as a whole host of creature comforts inside, including teak sauna-style flooring, a bathroom with a hot-water shower, a kitchen and 3D-printed dining table that folds away into a piece of backlit wall art.

The Tacozilla wasn’t the only thing on Toyota’s show stand, though. The firm also brought a modified version of the US-market Tundra, fitted with a host of TRD performance parts. It’s powered by a new 3.5-litre V6 hybrid powertrain, which produces 325kW and a massive 790Nm. And, so it can get all of that power down when driving off the beaten track, Toyota fitted some long-travel suspension and aggressive off-road tyres.

There’s plenty of show to match the go, too, with a unique carbon fibre wide-body kit, a custom-made roll bar, carbon fibre bed sides and a light bar mounted on the front bumper, which features spot lamps that can be retracted when they’re not needed to cut wind noise. 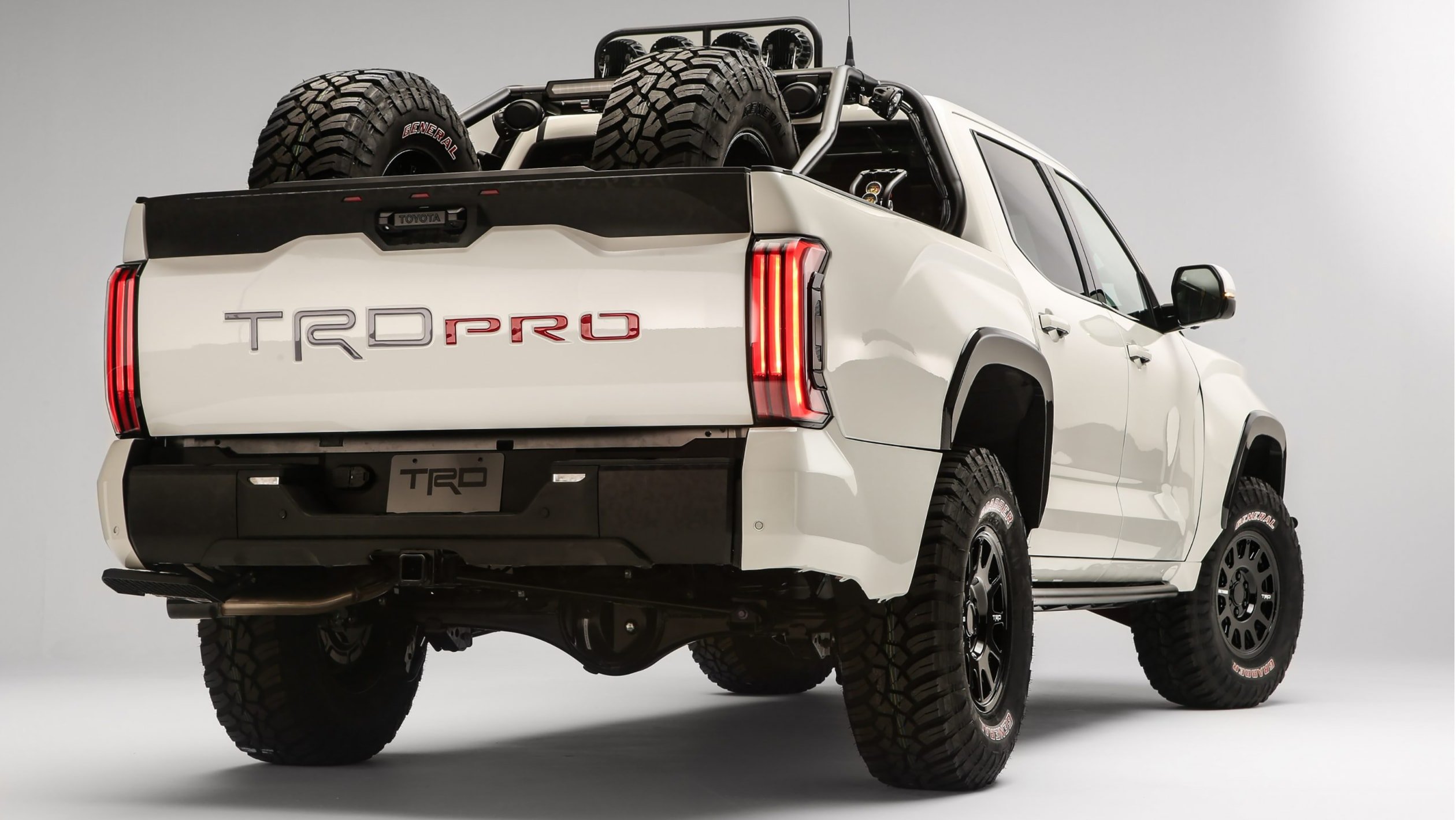 The Overlanding Concept rounds off Toyota’s trio of show trucks. It’s another campervan based on the Tacoma, but this one’s a contemporary take on the classic expedition vehicle, rather than a nostalgic nod to how campervans used to look like in the 70s. It features a rooftop tent, LED campsite lights, off-road rock-sliders, a winch and a bed rack system that can hold all of the provisions and tools an explorer might need. Toyota says the Overlanding Concept would serve as an ideal basecamp for hikes – and it’s perfect for prolonged expeditions, as all of the equipment can be quickly folded away.

Toyota’s show stand was rounded off by some TRD options that US customers can actually buy. The company now offers the Tacoma with lifted suspension (thanks to some help from Bilstein), a TRD skid plate, a folding hard tonneau cover and TRD off-road wheels.