Not many cars possess the capacity to really cheese me off, which is probably a good thing. But the first mid-engined Renault Clio V6, launched 20 years ago, managed exactly that.

It was all there: an extraordinary appearance and a mid-mounted 3.0-litre V6 developed by TWR, the same bunch of people who had won two of three previous Le Mans races for Jaguar. How could they make a mess of that? Somehow they managed it.

The car was grossly overweight and therefore little quicker in a straight line than the Clio 172 hatch. But the real problem was its handling, or rather its absence thereof. On the limit, it was probably the trickiest new road car I’ve come across, and that includes the Ferrari 348, which would at least let you slide it a bit before making Pininfarina-shaped holes in the nearest hedge. The Clio V6 wouldn’t even allow that. Its approach to corners went grip, grip, grip, grip, gone. And that was that. At the time, I described it as “at its absolute best when parked”. Whether Renault was surprised by the resulting hail of criticism isn’t remembered, but it certainly moved fast to sort it out. The entire car was, in effect, redesigned in two years, with the result you see before you. The entire suspension set-up alone was all-new, with different springs, dampers and geometry, plus revised kinematics, bespoke tyres and – get this – even a longer wheelbase. The fact that it had a little more power and shorter gearing was really neither here nor there. 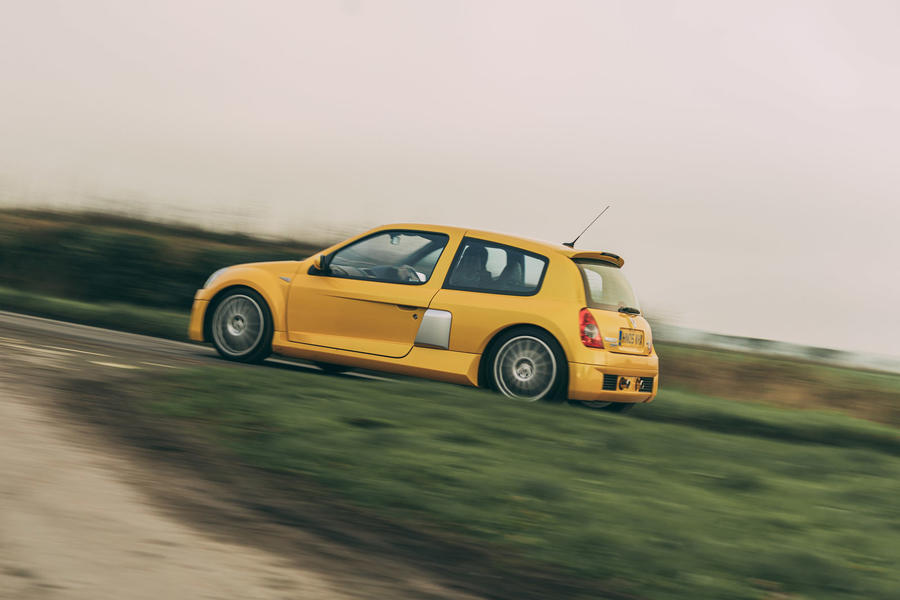 And guess what? This is still not a good car by any conventional definition. It’s still not very fast, the interior is still rubbish, the turning circle remains a joke, the steering feels rather odd and – I had forgotten this – the gearlever is about a foot further forward than you would either expect or desire.

Except two things are now significantly different. First, I’m looking back at it as a recreational and probably a ‘classic’ car, not with the eye of the contemporary road tester. Allowances can and indeed should be made. Second, the car may be poor in many and varied respects, but it no longer wants to kill me. I’m not saying it would be above a little light mugging from time to time, were its mood and your disrespectful driving style to warrant it, but you no longer tip it into a corner wondering through which window you’ll be regarding the world by the time the exit arrives – if it arrives at all. Here’s something else: there’s nothing like no longer being terrified for clearing the mind. If you’re being charged down by a bad-tempered rhinoceros, you don’t tend to take in the view as you flee; similarly, now that I was commanding a rather more compliant Clio, charms that might otherwise have gone if not unnoticed then certainly under-appreciated take centre stage.

You can see for yourself how fabulous it looks, but you’ll have to take my word that it sounds at least as good, too. We have already forgotten what a large-capacity, normally aspirated multi-cylinder engine can feel like when installed in a compact car, but its even flow of torque, wide rev range and rousing growl make it the perfect accompaniment for such a machine. It’s also surprisingly good over a distance, too, thanks to the bizarrely plush ride and impressively muted levels of road noise – provided you can stomach its thirst… 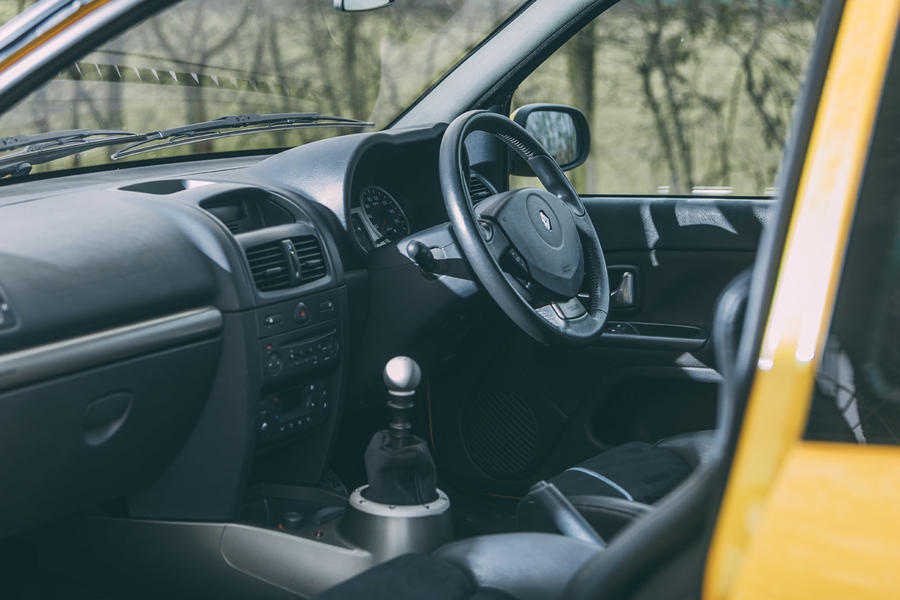 The more I drove it, the more I liked it, even reaching the point where I started to the enjoy its weaknesses. Unlike so many new cars that are today far too keen to say to their drivers, ‘You just sit back and watch the show’, you really have no choice in the Clio but to get stuck in.

Gearchanges need timing if smooth progress is to be retained, while corners need careful planning and accurate execution if you want to keep your trajectory clean and linear – which, even in this Phase 2 car, you really, really do. It is perhaps a strange kind of fun for modern tastes, but it is no less fun for that. When it departed, it left behind a sense of sadness. No, it’s not a very good car, but it was an extremely charming one, and I enjoyed being in and around it far more than the vast majority of the modern stuff I drive today. What I liked most was the maverick streak that runs through it from front to back. For while the original mid-engined Renault 5 was built to homologate a rally car, there was no such requirement for the Clio V6. It didn’t even have many parts in common with the mid-engined Clio Trophy one-make racer. I have no idea if it was profitable, but even if it was, I would bet that it was only marginally so. And I don’t think for a moment that it was born in the hope that, decades later, it would still be benefiting the brand, thanks to people like me writing wistful words like these in magazines such as this. Sadly, such cars are only going to become rarer in the ever-more homogenised, electrified world towards which we are moving – which means I’m going to have to think up more excuses to borrow the Clio again. I’ll call it essential medicine – an automotive therapy for those of us who accept that life has to change but still want to be reminded how it once was, or at least could be when a bunch of delightfully potty people got together to create something quite mad for no other reason than because they could.