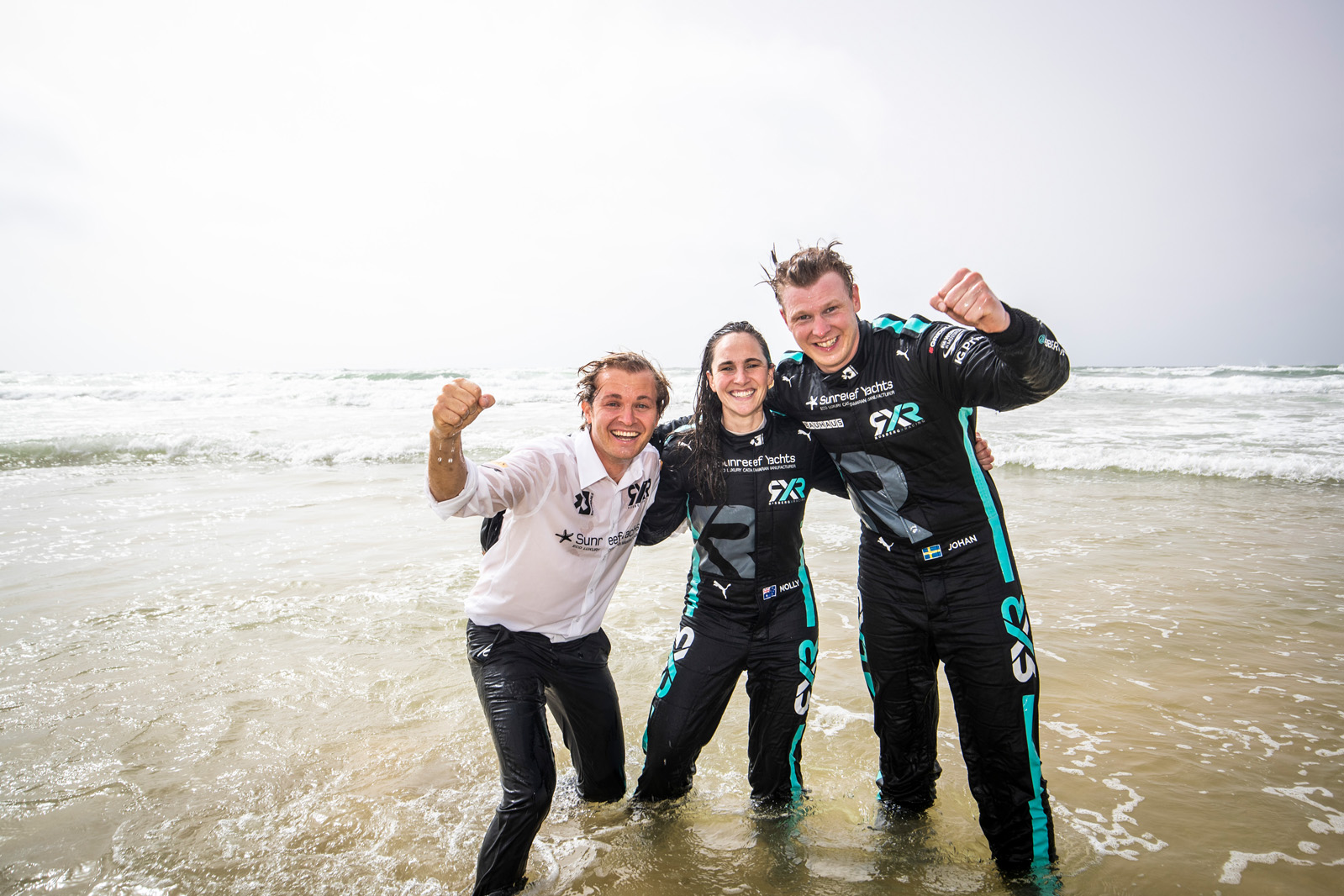 Rosberg X Racing’s pairing of Johan Kristofferson and Molly Taylor continued to set the pace in Extreme E with their second victory of the season in the Ocean X Prix in Senegal, surviving a clash in the final with X44’s Cristina Gutiérrez.

The event in the African country, held on a course carved out on a beach and dunes alongside the Atlantic Ocean, proved a far better showcase for the new electric off-road series than the Saudi Arabia season-opener, where poor visibility due to dust on the desert course made overtaking virtually impossible. Here’s what we learned from Extreme E’s second event.

RXR continues to set the pace As in Dakar, the RXR pairing took victory, were among the pacesetters all weekend and took glory in the final, although this time they had to work far harder for it.

Taylor was in the car for the first lap of the final, and on the run to the first turn found herself wheel-to-wheel with Gutiérrez in the X44 car that had set the pace in qualifying. The two cars touched on the exit of the corner, which sent Gutiérrez off the track into a dune, terminally damaging the car.

The X44 entry wasn’t the only car to drop out of the final: the JBXE machine suffered a rear suspension breakage after Mikaela Ahlin-Kottulinsky tried to change lanes on the beach section and ripped off the rear suspension in a rut.

That left RXR to battle with the Veloce Racing machine of Stephane Sarrazin, who was right on Taylor’s tail as they entered the driver swap zone at the midway point of the event. But with two cars stuck on the course, organisers decided to red flag the event to recover them, setting up a one-lap shootout between Kristofferson and Veloce’s Jamie Chadwick. Both drivers used their ‘hyperdrive’ boost off the start and briefly touched, but Kristofferson took the lead into the first turn and held it to the end. Still, second was a great result for Veloce, given it was the team’s first race after writing off their first car with a crash in qualifying in Saudi Arabia.

The JBXE car was credited with third, as it had travelled more of the course, with the X44 car fourth.

Retirements make for a disappointing final

The final was the first time that four cars had competed in a single Extreme E race, after the dust in Saudi Arabia had prompted organisers to limit the numbers on the course on a single time.

It was unfortunate, then, that two of the four cars didn’t make it past the first turn, robbing the final of much of its drama. While both retired for differing reasons, it was notable that both suffered terminal issues after what appeared to be relatively minor incidents. For a series built on the premise of ‘go anywhere’ race cars, that will be a concern to organisers.

But the racing was an improvement The races in the dusty season-opener were effectively decided by which driver was leading in the first turn. Thankfully, the Senegal series proved that Extreme E cars can overtake – even if it won’t be easy.

The best showcase came in the Last-Chance Shootout event that decided positions six to nine in the final standings. That event featured the Chip Ganassi Racing car of Sara Price and Kyle LeDuc, which was fastest in practice but hit trouble in their semi-final when LeDuc hit a tree, knocking the car into reset mode.

Price completed the first lap of the Shootout in last place, before handing over to a clearly fired-up LeDuc. He then stormed past both his rivals in the final part of the lap to take the win in the final, and sixth in the final standings. The Ocean X Prix felt a major step forward for Extreme E, a far better showcase of what the championship is capable of. Unfortunately, it also felt like it received much less wider attention than the Saudi Arabia opener, at least from monitoring the British media.

There are several factors for that: the novelty of the first event had gone, it was a far busier sporting weekend with the likes of the Champions League Final and Indianapolis 500 and there weren’t two terrifying massive crashes in qualifying to relay ad infinitum on the news.

But it also felt like the long break between the two rounds hurt the momentum somewhat, and is something organisers will need to address. It’s hard for a sport to build theatre and drama if the frequency of events doesn’t help build intensity and interest. And it’s going to take more than Prince William having a drive in an XE car.

That’s a problem Extreme E will need to find a solution too, given the spaced-out calendar is for a reason: it allows the championship’s nerve centre boat to travel between venues in the most efficient way possible, and for scientists on the St Helena to conduct extended research projects in each location.

But it’s not ideal: and it’s notable that the gap until the next event is even bigger than between the first two: it’s basically three months until the Arctic X Prix in Greenland on 28-29 August. That’s a long time to wait: still, the events in Senegal have shown it’s worth putting a reminder in your diary.