The one and only small, lightweight four-wheel drive is how Suzuki pitches the Jimny – which sounds fair. At 3.6 metres long it’s shorter even than its predecessor, and at 1135kg it weighs about as much as a heavily laden tool chest.

So to test its off-road chops, here I am, having it scamper up hills in a disused quarry. And it’s very good: a mountain goat or a spring gazelle among a herd of beasts of burden, one of which – a ToyotaLand Cruiser Prado – is dutifully following in its tyre tracks.

The latest fourth-generation Jimny is tiny in relation to the LandCruiser Prado. It remains a kei-class car in Japan (which means, without the flared wheel arches and bumpers of this export model, it’s tinier still), and that was the idea in the first place. The Jimny was conceived as a practical, rugged vehicle that looked ‘Jeepy’, and in 1970 was the first four-wheel-drive vehicle to meet the miniature kei-class regulations.

Weirdly, its generations get longer: the first car remained on sale for 11 years; the second SJ, the one people really knew as a ‘Suzuki Jeep’ and which gained a reputation for falling over, was on sale for 17 years; and the last for 20.

This latest version is shorter than its predecessor but to my eyes looks bigger, perhaps due to more chiselled edging, giving it a more G-Class-like appearance.

But it feels no bigger inside. The Jimny is unashamedly compact, and though it can fit occupants in the rear, if you fold down the thin rear seat backs to create a flat plastic load floor, from the front seat you can reach deep into the load bay – which I reckon would take a hay bale or a couple of dogs. With the rear chairs upright, there’s barely a sliver of boot, but the Jimny never was a family car.

It has resisted the move to accepting the mechanical layout of one, too. Where other small off-roaders have adopted a monocoque, the Jimny retains a separate chassis with live axles sprung off it, both front and rear. Where most cars get a turbocharged engine, the Jimny’s naturally aspirated four-cylinder unit is a 1.5 of just 75kW at 6000rpm and 129Nm at 4000rpm – high revs for a 4×4, which is why the low-range transfer gearbox is proving a considerable help as it springs in and out of steep troughs with precious little chance of grounding its extremities. 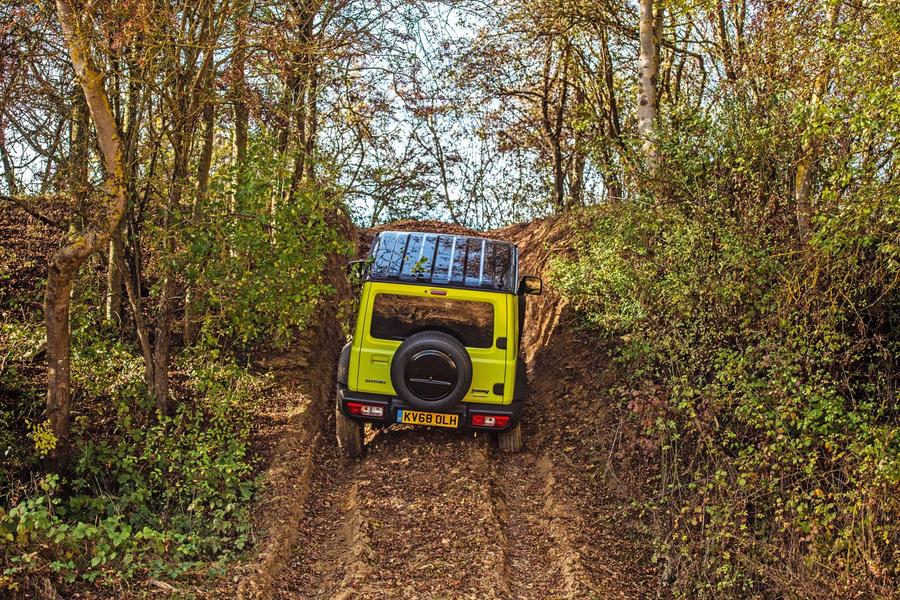 The approach angle is 37-degrees, breakover 28-degrees and departure angle 49-degrees. Is that good? Don’t just look to the Land Cruiser, but also to the latest Jeep Wrangler – probably the most impressive unmodified 4×4 I’ve driven. That betters the Jimny’s approach angle (44deg), but can’t match breakover (27.8deg) or departure (37deg).

Those aren’t the only important numbers, of course, because off-roading is more nuanced than that. In cars with a live axle, draw a line between the wheel centres, and a bit below that you’ll find the car’s lowest point to the ground. That the Jimny rides on 195/80 tyres and 15-inch wheels leaves its ground clearance at 210mm, while a Jeep can have up to 300mm. So on rutted tracks or rock crawling, there are cars that will go further. But then the Jimny’s 1645mm width and 9.8m turning circle will see it squeeze through gaps other off-roaders cannot, while its kerb weight has it skipping over mud patches that suck heavier cars in. 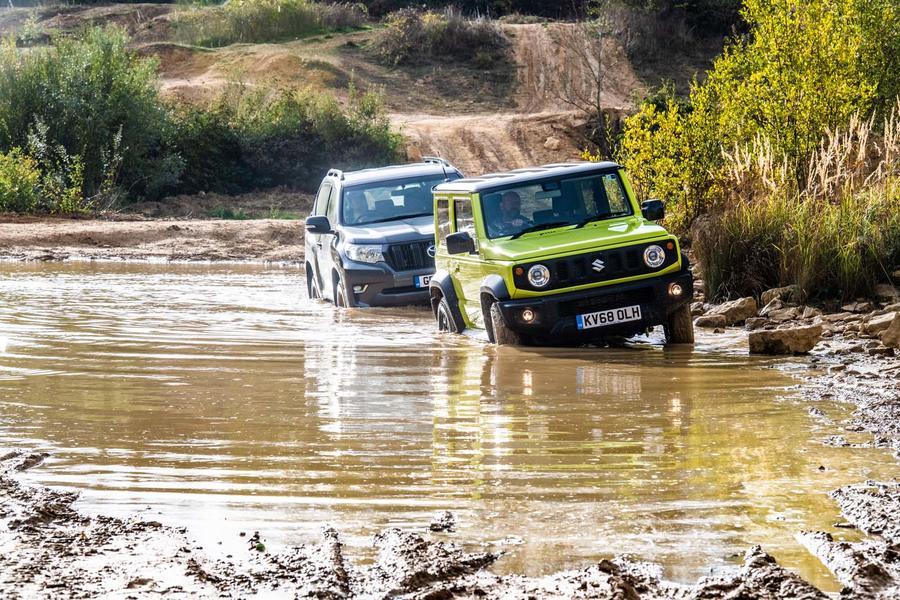 Conversely, though, some cars get big turbocharged diesel engines and locking differentials. The Jimny’s open differentials have torque vectoring via braking, which only artificially replicate lockers, and then not always successfully. They sometimes leave a wheel spinning helplessly for grip. Usually, but not always, the answer is to back up and try again with a bit more speed, and allow the lack of inertia to do the job.

Would the Jimny benefit from a turbocharged engine? Certainly on the road, where it’s dreadfully buzzy, and off-road it’s easy to stall if you’re trying to creep forward without over-working the clutch. But if a turbo and cooling adds 20kg, perhaps necessitating a beefing of the clutch, it’d be easy to get trapped in a cycle of making things heavier to cope with something else you’ve just added weight to, and end up with a 4×4 that isn’t a Jimny at all. 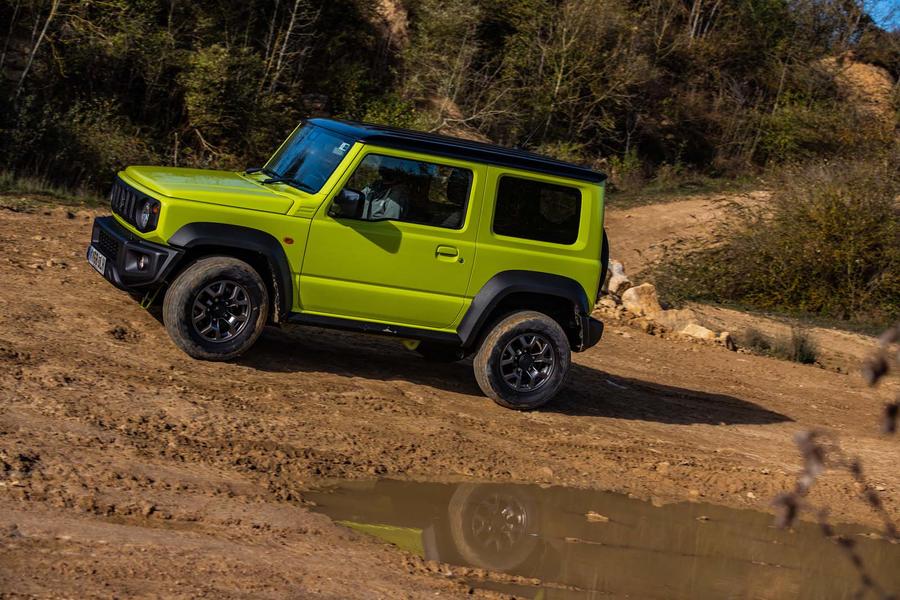 In 2018, it was reported that Suzuki was the most profitable car company, per unit, in the world: an examination of the Jimny’s underskin shows you why. You tap at it and wonder how thin the sheet metal is, you can see where they’ve stopped painting it, and what’s left uncovered by vanity plastic in the engine bay. The absence of a turbo saves cost, as does only having five speeds on the fairly sweet gearbox, and if a less than brilliant 6.4L/100km and 154g/km of CO2 is the result, you can see how Suzuki makes money on cheap, tiny cars while other car makers cannot.

The LandCruiser Prado is not a tiny car, but in ethos it’s not that unlike the Jimny – it puts off-road provenance before on-road refinement, although not to quite the same extent as the Suzuki, which as well as being breathless, is a bouncy and tiresome car on asphalt. But a car like the Prado, which is popular in Australia, should deal with a Rutland quarry, right? 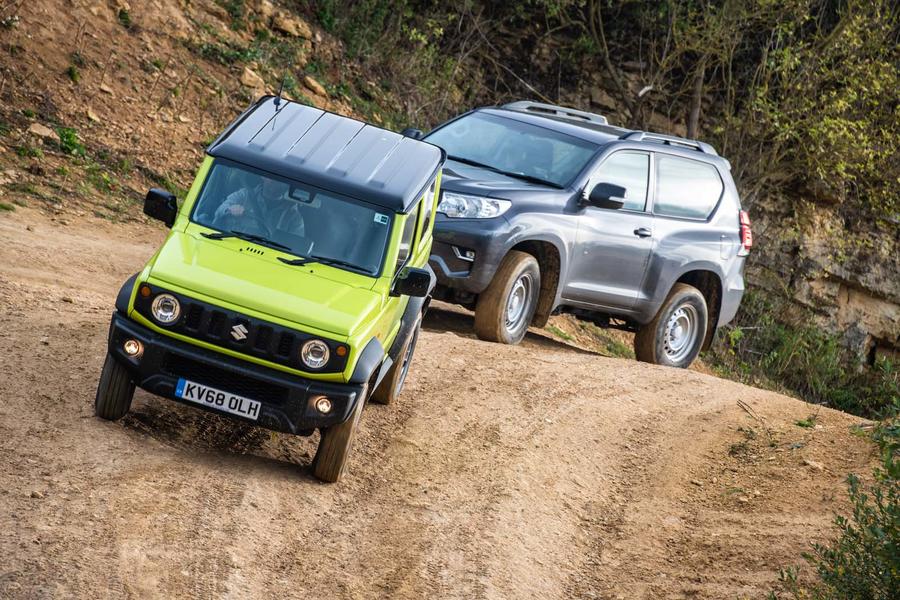 Actually, yes. There’s no Goliath-slaying here. With a 700mm wade depth, twice that of the Jimny’s but a kerb weight, list price and towing limit that hover around that ratio too, the LandCruiser Prado is the kind of old-school body-on-frame off-roader that you’d rely on to take you anywhere you want to go, and then bring you back again.

It too has low-ratio gears and one live axle (the rear, which, curiously, hangs 5mm lower than the Suzuki’s) but also a limited-slip centre differential (high-end models get air springs and a limited-slip rear diff too). But this three-door model is itself surprisingly agile, owing to a small (10.4m) turning circle.

There are one or two occasions where the Jimny will fit between trees that the Prado will not, though you’d bludgeon the Toyota through if you had to, and there are occasions when you’d take the Jimny’s 1135kg over the Toyota’s 2055kg. But mostly the Toyota will go further, more easily, in more relaxed style, than the Suzuki – particularly when crawling over rocks, or wading. Yes, there are times, mostly size-based, when the Suzuki will go where the Land Cruiser won’t, but by and large the Toyota feels, and is, the more capable, more competent, and certainly more relaxed, off-roader. 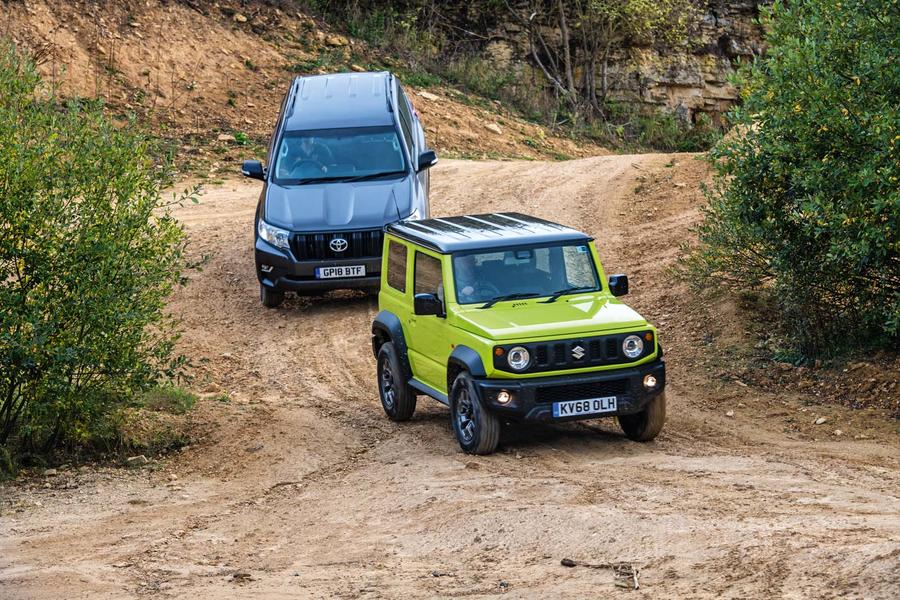 And it feels constructed from more solids and feels twice as refined on the road – though given the price difference, this is unsurprising.

In truth, comparisons do not proffer a slight on either: they come at doing broadly the same thing from two very different ends. To pick a winner would be like deciding whether a Porsche 911 GT3 or a Ferrari 488 is the better sports car. The fact is that they’re both great at their primary jobs – which, to my eyes, makes them two of the most honest and likeable vehicles on sale today.