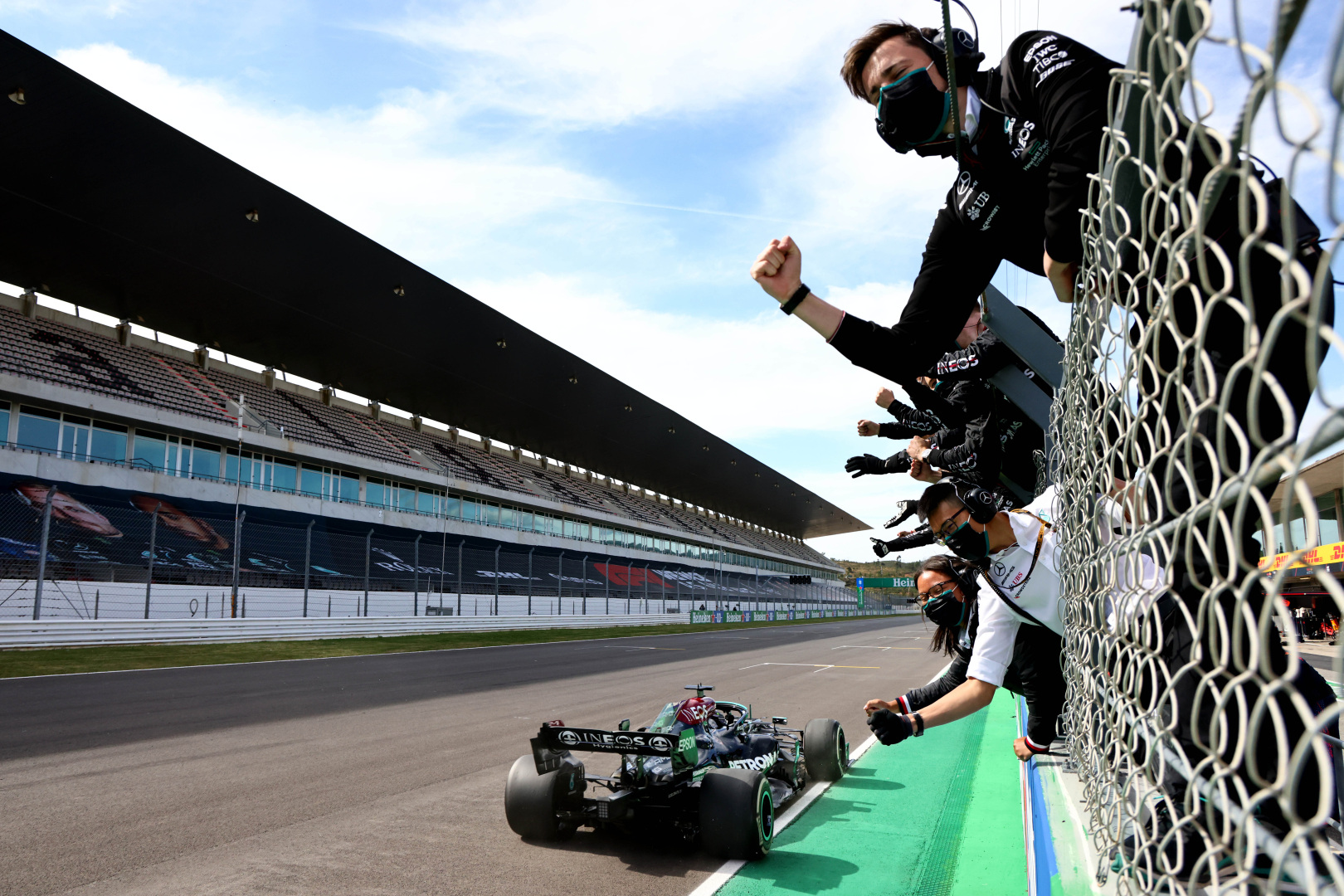 Lewis Hamilton won his 97th Grand Prix in Portugal earlier today, but didn’t have it easy as he had to pass both his Mercedes team-mate Valtteri Bottas and arch-title rival Max Verstappen on his way to the win.

Hamilton’s victory means he’s eight points ahead of Verstappen, after the Red Bull driver nabbed second from Bottas. The Finn saved some face with a point for fastest lap, after Verstappen’s faster time in the dying laps was disallowed for breaching track limits.

Hamilton back to his best After a mixed outing at Imola last time out, Hamilton was back to his imperious best in Portugal. Aside from a brief mistake after the safety car restart, when Verstappen caught him napping, Hamilton never looked back.

The overtake past Verstappen was relatively easy, as Hamilton used his DRS down the start-finish straight and dived down the inside, but it was the spectacular pass on Bottas that was trademark Hamilton.

Bottas forced him to the outside into turn one, but Hamilton used his superior momentum from DRS to drive the long way round the Finn. He managed it without breaching the track limits so it was classic Hamilton – fast, ruthless, yet clean.

Special credit should also go to Mercedes for allowing the team-mates to race.

McLaren’s Lando Norris kept his own personal clean-sheet of the season, being the best of the rest outside of Mercedes and Red Bull for the third race in a row.

Norris is on a roll at the moment, showing his illustrious team-mate Daniel Ricciardo the way home both in qualifying and the race in Portugal. Aside from Hamilton’s move on Bottas, Norris had arguably the overtake of the race, passing Alpine’s Esteban Ocon around the outside during the first lap and managing to make it stick through a series of left, rights. It was spectacular to watch, especially bearing in mind that the car was full of fuel.

By contrast, the other rising-star Brit, George Russell, had a race to forget, dropping from 11th in quali to finish 16th. Track limits were again a point of contention. They caught out numerous drivers in qualifying, but they also meant Verstappen missed out on the point for fastest lap – something that could be crucial in such a tight title race.

Red Bull’s Helmet Marko was pretty clear on his thoughts as he spoke to Sky Sports Germany after the race, saying the rule cost Red Bull the victory, pole position and fastest lap.

What isn’t as clear is what should happen. Circuits have Tarmac’d plenty of run-off areas in the last few years and pushed barriers away from the track itself – Marko went on to suggest that maybe there should be physical objects, such as kerbs or gravel, to make any breach more consequential. That’s a significant change that requires a re-think from all involved in F1, from the FIA down. That’s unlikely to come as soon as Marko would want it.