The Emilia-Romagna Grand Prix proved far more exciting than many had predicted after last year’s yawn-fest at Imola, thanks to a deluge of rain before the start.

Max Verstappen took a commanding win for Red Bull-Honda, which again looked to have the fastest car on the 2021 grid, while Mercedes-AMG’s Sir Lewis Hamilton recovered fantastically from a slide into the gravel on greasy asphalt. The podium was completed by British youngster Lando Norris, who drove superbly for McLaren-Mercedes.

Here we round up the major talking points from the second round of the 2021 F1 World Championship.

We’re in for a title battle

Not since 2016 have F1 fans been truly treated to a title battle, due to the utter dominance of Mercedes. But the rule changes for 2021, despite them being minor, have benefited the cars that subscribe to a high-rake aerodynamic philosophy and hampered the low-rake cars – which are only the Mercedes and Aston Martin.

The Red Bull again looked to be the fastest car at Imola, and Verstappen made up for his near miss in the Bahrain season opener by brilliantly outdragging from third on the grid his team-mate Sergio Pérez and Hamilton, to lead into the first turn. From there, Verstappen never looked back. There was a heart-in-the-mouth moment as he nearly lost it before the restart, but Verstappen held on and didn’t let that shake his confidence.

Hamilton versus Verstappen in closely matched machinery over the course of a season is something that F1 fans have long desired. Imola seemed to confirm that we’re finally going to get just that. Sparks: be ready to fly. 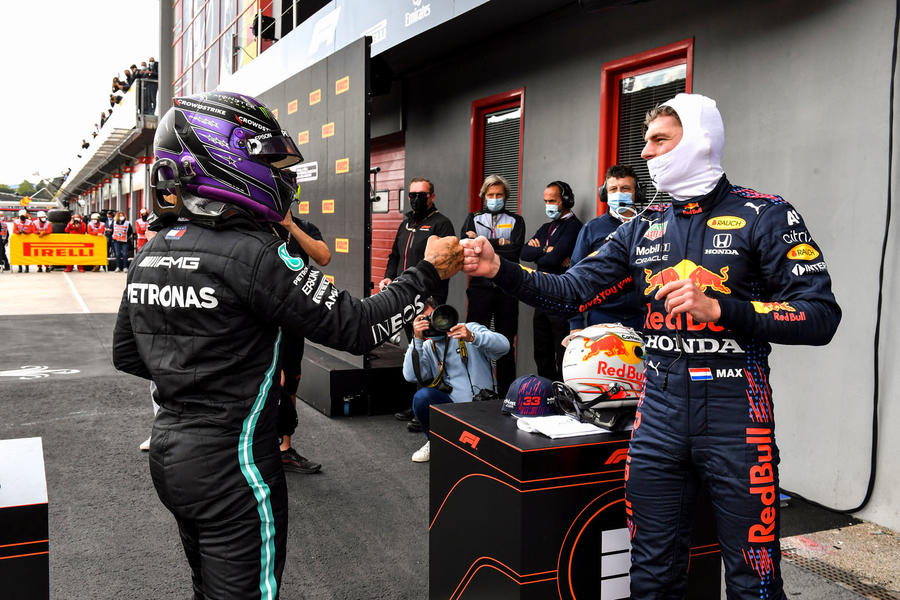 Having never been anywhere close to Hamilton in his years at Mercedes, Valtteri Bottas is widely expected to lose his Mercedes seat at the end of this season, unless he really pulls it out of the bag. At Imola, he couldn’t even open the bag’s zip. He qualified just eighth in the second-fastest car, didn’t make up too many places and then had an almighty crash – followed by some in-person aggression.

All the more interesting was that this crash was with Williams-Mercedes man George Russell, who is popularly believed to be in line for Bottas’s seat. Russell was outdragging Bottas down the pit straight (helped by Imola’s newly extended DRS zone, which helped to alleviate the boredom of last year), the Finn moved right a tad at a critical point, pushing Russell onto a wet patch of the drying track, and the sudden wheelspin sent him nose first into Bottas’s sidepod at 320km/h.

What was truly revealing was that as Russell ran across to remonstrate with Bottas in the gravel trap, he was greeted by a proud middle finger – which was answered by a slap on the lid.

Midfield battle is on

Imola confirmed that Ferrari has remedied its woeful 2020 car into a strong contender in the midfield for 2021, as the scarlet cars qualified strongly and then finished fourth and fifth. Meanwhile, the switch to Mercedes power has boosted an already great McLaren car, resulting in a podium for Norris. It was pleasing to see the teamwork and some humility from team leader Daniel Ricciardo as he was asked mid-race to let Norris past, who had unlocked a considerably faster pace in the wet.

And Williams looks to have lifted itself from the basement – although that good work was rather let down by both of its drivers having heavy crashes for which they must accept at least some of the blame. 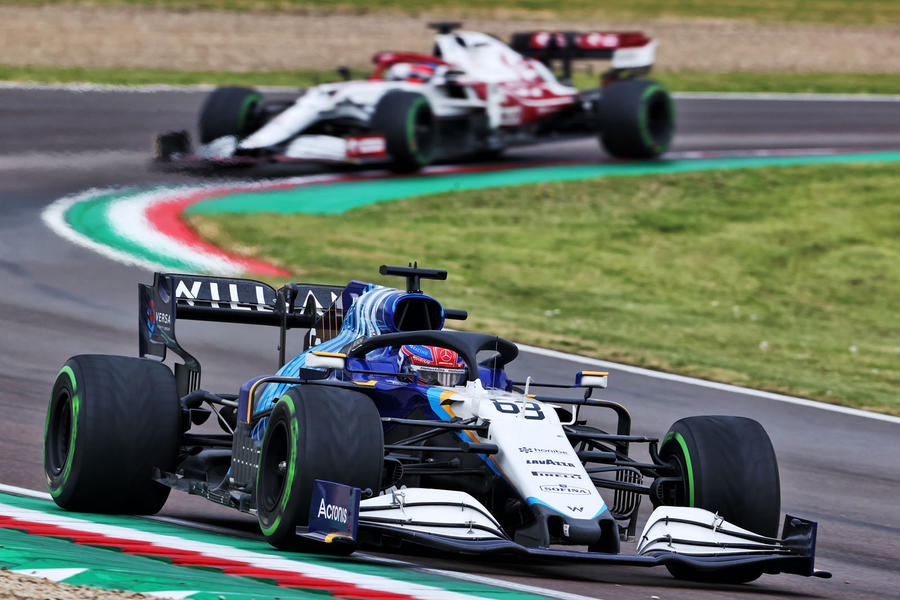 AlphaTauri-Honda, Aston Martin and Alpine-Renault all also scored points, and Alfa Romeo should have done so too, but for a technical infringement.

All in all, it appears that we have seven teams in the hunt in the midfield, each of which has one or two top drivers. What great stuff.

After being let go by Ferrari before last year even started, Sebastian Vettel’s F1 career looked to be in peril. His move to Aston Martin was meant to be a fresh start, a chance for the unbeatable, quadruple-title-winning Vettel to re-emerge. It really hasn’t turned out like that.

Vettel’s Bahrain weekend started badly and his most notable moment in the race was running into the back of Esteban Ocon. His Imola performance was equally dire, as he was out-qualified by a Williams and then finished 13th, having retired due to gear selection issues with two laps remaining. Imola delivers, but only just

Yes, it was an exciting race, but that was mainly due to the rain and, to a lesser extent, the extended DRS zone. Without the crashes caused by the low-grip conditions, this would have been another pretty tedious race. Imola is beloved by motorsport purists, but F1 cars have outgrown it, to such an extent that there’s now really only one overtaking zone.

We already have a grand prix in Italy – at Monza, which is an infinitely better track in the modern context. Turkey was expectedly excellent last year and Malaysia is much missed. Much as it pains us to say it, Imola belongs in F1’s history books, not its future.