Our list of the top 10 grand tourers currently on sale are all capable of eating up the kays while leaving you feeling fresh.

The classic ‘grand tourer’ might once have been identifiable by the combination of an elegant but surprisingly accommodating coupé bodystyle, a long-striding powertrain, a sporty but compliant suspension tune and an exotic nameplate.

This top 10 list, then, is populated by the cars in which we’d most like to drive a long way. Most are fairly exotic, luxurious and desirable; many are at least partly defined by sporting ambition. Most, too, are four-seaters (although not quite all), with plenty of luggage space for a weekend away included.

So what are best four-wheeled options on sale right now for under $250,000 in which to while away miles in style, at pace, in some luxury – and with a broad smile on your face?

The concept of a four-door Porsche saloon was controversial when the first-generation Panamera launched in 2009. While vulnerable to criticism for its awkward styling, this was a spectacularly well-engineered, true driver’s car and an effortless continent cruiser.

And now freed from some of that initial controversy and much improved for its design, the second-generation Panamera feels like it’s finally cemented its place in Porsche’s model catalogue. We road-tested this car in 2017, powered by a remarkable V8 turbodiesel engine producing 310kW and 850Nm of torque that was, in many ways, ideally suited to the car’s long-legged brief. Porsche would later remove the Panamera Diesel from sale when it abandoned diesel engine technology in 2018, however, but left a fairly wide choice of engines in the showroom range.

A remarkable 500kW twin-turbo V8 performance hybrid is at one end of the spectrum but it’s not the only low-emissions PHEV option, while a choice of turbocharged V6 and V8 motors fills in the rest of the range. True to Porsche’s exacting engineering standards, there isn’t a weak or under-endowed powerplant among them. At its best, the Panamera blends dynamic driver appeal with distinguishing touring credentials better than any other car of its ilk. It steers with weight, handles with precision, grips assuredly and accelerates urgently; and though it’s a sizeable car and a heavy one, too, when hybrid drive batteries are included, it seldom suffers much for its heft.

The regular four-door, four-seat version has a 495-litre boot, with 1263 litres of storage if you fold the rear seats, and impressive in-car tech and infotainment. We prefer the five-door Sport Turismo shooting brake bodystyle, however, which adds a fifth passenger seat, adds useful boot space too, and puts a little bit more notional fresh air between the car’s exterior styling and that of a current Porsche 911 – which is no bad thing.

If it’s a modern take on a true classic luxury GT car you want, and a car of truly outstanding rolling comfort, refinement, convenience and effortlessly suave performance, the S-Class Coupe should be absolutely top of your shopping list.

Mercedes went light on exterior styling changes for the latest mid-life facelift of the S-Class Coupe, but it was a different story inside, with a revamped instrument cluster, upgraded infotainment, Active Distance Control cruise control and Active Steering Assist all coming in.

Under the bonnet, the firm rationalised the car’s range of engines. Both S560 and AMG S63 versions of the car are now powered by a 4.0-litre turbo V8, while the now discontinued but formerly top-of-the-range AMG S65 stuck with Stuttgart’s venerable but formidable 463kW 6.0-litre turbo V12.

Where other grand tourers offer a more engaging, connected-feeling driving experience, the S-Class’ brief is to fully isolate, cocoon and protect – and to spirit you over massive distances in supreme comfort and ridiculous ease. These are things it does quite formidably well.

Whether Mercedes invented the modern hybrid vehicle bodystyle that, for a while, was amusingly christened the ‘coupoon’ (a crossbred four-door saloon with a more tapered silhouette and a swooping coupé-like roofline) or whether it was Maserati with the fifth-generation Quattroporte is a matter of contention. Either way, it’s fair to record that the original Mercedes CLS of 2004 was one of the originators of what still seems a fairly new vehicle type; and that Mercedes has also probably done more than any other car to popularise it since.

It’s not hard to appreciate why such a car might make a great GT. The inclusion of four adult-sized seats, the access to which is made easy by no fewer than four passenger doors, is chief among the reasons. Now in its third model generation, the CLS has always provided significantly better than most 2+2s for practicality, hitting a high point for it with the Shooting Brake version.

The CLS has never looked better than in its first trendsetting model generation, but the slightly awkward looks of the second-generation version are now behind it, while the car’s technology-packaged, leather-bound cabin has never been more inviting than it is today.

The car’s engine range includes both four- and six-cylinder turbocharged petrols and a couple of six-cylinder turbodiesels, with the four-wheel-drive CLS 53 performance hybrid having replaced the firebreathing, V8-powered old CLS 63 at the top of the pile, and bringing an appealing different flavour to the AMG armoury. The car’s chassis juggles involvement against isolation well – although bigger-rimmed versions fitted with run-flat tyres can suffer with iffy rolling refinement and are certainly worth a test drive before purchase.

There was a gap of almost 20 years between the deletion of the original ‘E31’ BMW 8 Series and the introduction of the latest version; and, as we’ve touched on several times already, the market for big GTs has changed quite a lot in the past two decades. And yet, while it doesn’t quite have the pioneering aura of its immediate forebear, BMW’s latest flagship coupé brings much more desirability, status and presence with it than the 6 Series Coupe that it directly succeeds, combining trademark BMW driver appeal with top-level touring comfort and impressively luxurious ambient richness. 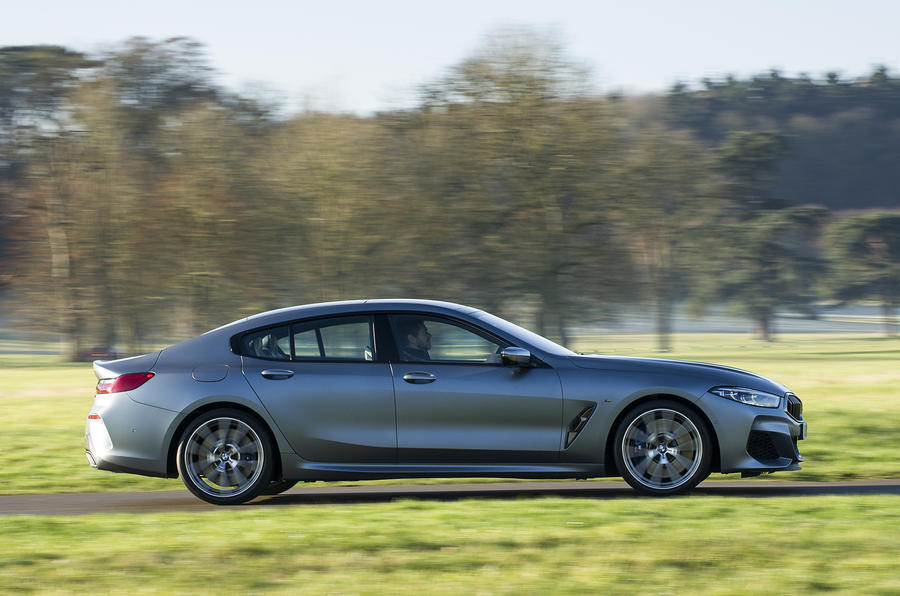 And to give the Audi A7 and Mercedes CLS due competition, the model is also available in an especially rakish four-door Gran Coupe configuration. There’s a choice of petrol or diesel power, the latter coming from one of Munich’s outstanding twin-turbocharged diesel straight-six engines that, with 236kW on tap, feels well worthy of this kind of application. Higher up the range there’s a 390kW turbo V8 petrol on offer in the M850i, and the range culminates with the 460kW 4.4-litre twin-turbo M8 Competition, which supplies true – if you’ll excuse the cliché – continent-crushing performance.

All versions of the car are four-wheel drive but all have steel sprung suspension (unlike the air suspension offered on the Mercedes and Audi) – and all offer a driving experience tuned for a less cosseting, more engaging dynamic compromise than some cars in this class. Plump for an M850i, moreover, and you can have a car that has not only four driven wheels but also four-wheel steering and active anti-roll control suspension, too.

Kia’s trajectory in terms of good design has become ever steeper since they hired Peter Schreyer to reinvent the brand’s aesthetic, but what you might not know is that top European engineering talent has also been acquired to make the cars drive as well as they look. And so it is is with the Stinger GT S. Here he was a rear-driven fastback that uses a 3.3-litre, 272kW twin-turbo V6 – and the result is a car that possesses the sort of satisfying feel in the steering and balance that has historically been available only in certain BMW and Jaguar saloons.

Admittedly, the cabin isn’t quite as polished as what you’d find in an Audi A7 and co., but it’s comfortable and reassuringly, and long-distance manners are assured, courtesy of the pliant ride. The cabin’s roomy, too, and then there’s the asking price which is a bargain.

There has been a Jaguar XJ at the pinnacle of the firm’s saloon range since 1968, and for the next generation, that XJ will be offered solely as an electric car.

Until then, the most recent version – which can still be bought new – is a confident, forward-looking expression of the firm’s modern revival. The sportiness hinted at by those sleek lines is reinforced by an excellent-handling chassis. The XJ’s cabin then offers a sense of style and drama that German rivals can’t muster, even if it doesn’t compete in terms of sheer material quality and trails in terms of interior tech.

But the XJ is defined by how it drives – possessing something of the sportiness of a super-saloon twinned with a flavour of the aloofness of a limousine. The result is a car with rare poise and engagement for one so big, and of strong performance and great usability – and a really likeable GT car to boot.

Audi took up the concept of a racier executive saloon-cum-GT car, created in the mould of the Mercedes CLS, with some zeal at the end of the last decade, launching both the A5 and A7 five-door ‘Sportback’ body derivatives within two years of each other. Both proved popular enough to survive into a second model generation, but it’s the bigger of the two (which was renewed in 2018) that makes it into our grand tourers top 10. The second-generation A7 shrunk slightly on overall length compared with its predecessor but grew on wheelbase and likewise on four-seat practicality, to a point where only the very tallest adults would have cause for complaint about its back seat cabin space. Up front, the car’s central widescreen touch-sensitive display consoles aren’t as easy to use as they might be but the car’s qualifications as a luxury mode of transport are way beyond reproach. Material quality is excellent and onboard refinement levels very good. A ‘liftback’-style bootlid makes for better boot access than some cars in this class afford.

As a keen driver, you feel inclined to make a case for the LC. The 500 version has a superbly charismatic and likeable V8 engine, and the car’s balanced, spry, involving handling make it feel, at times, more of a natural rival for a Jaguar F-Type or a Porsche 911 than a Mercedes S-Class Coupe.

The car seems large, heavy, leaden-footed and a bit cumbersome on the road at times too – so you never quite escape a feeling of ambivalence about it. As a grand tourer, the LC’s lack of carrying space, the pokiness of its occasional back seats and the wooden feel of its run-flat-tyre-hamstrung ride are all notable black marks against it, too. Ultimately, depending on how much you’re moved by its virtues or irked by its shortcomings, this car will either seem like a bit of a rough diamond or the dreaded curate’s egg – but if you like driver’s cars and you avoid the disappointing hybrid version, you’re much more likely to be in the former camp.

Bigger and longer than it ever used to be, the latest Maserati Quattroporte has become a full-sized executive limo, taking aim at the Jaguar XJ in combining high-end comfort with the sporting, exotic drive you’d expect of a Maserati.

The car comes with plenty of kit, and the interior is a class above its stablemates on outright passenger space and equipment – although it’s now more than a step behind the pace set by its German opponents on both perceived quality and technological sophistication.

Maserati’s trademark flair helps the car get your attention, but it’s not a match for its rivals in several key areas – and its driving experience, while still rich enough, isn’t a match for that of its popular immediate predecessor.