The iconic Porsche 959 was so far ahead of its time that it’s taken 34 years for the 911 Carrera 4S to catch up. We compare them

I remember well the reception afforded to the Porsche 959 when it finally went into production in 1986, three years after being shown in concept form. This wasn’t just a new level for 911-based machinery nor even for Porsche itself. It was a new level, period.

Those who drove it spoke of cruising, yes cruising, at 260km/h, and the strong acceleration still available at that speed. It blew Ferrari’s gorgeous and still quite new GTO (only latterly described as a 288 GTO) into instant obsolescence. Those journalists who drove it were thunderstruck, and rightly so. 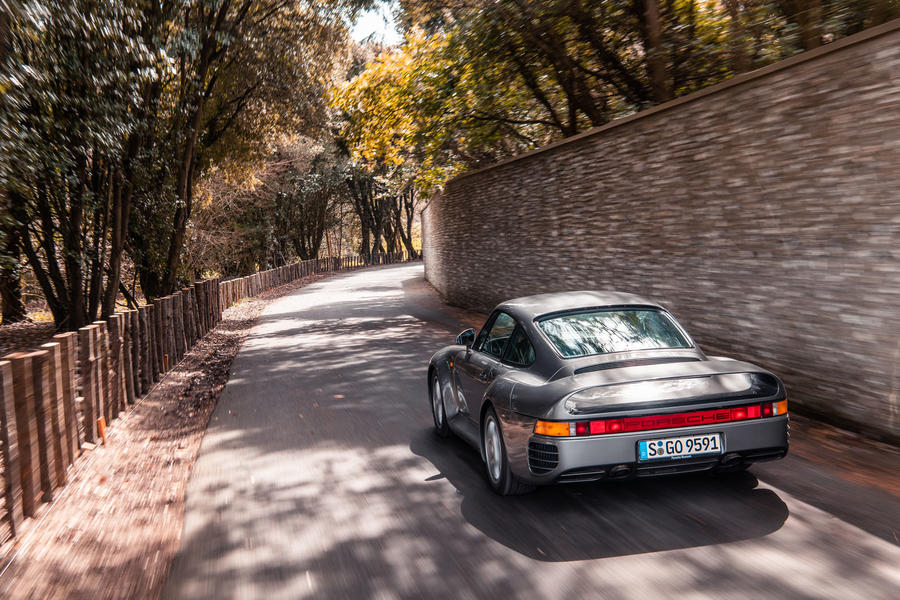 For this was the fastest production road car the world had ever seen. It had 331kW and a top speed of more than 305km/h. It could reach 100km/h in 3.7sec. It didn’t just have four-wheel drive but also a demand-based variable torque split and even – would you believe it? – adaptive damping. It made the Ferrari look like a rather elegant antique.

So here’s a set of stats from another car: 331kW, a top speed of 305km/h, a 0-100km/h time of 3.6sec, four-wheel drive, a demand-based variable torque split and, yes, adaptive damping. Pretty similar, you’d agree. Except these numbers belong to a 992-generation 911 Carrera 4S, one of the humbler members of the new 911 range. It has taken 33 years, but performance and technology regarded then as borderline insane is now within the preserve of the high-quality but entirely everyday sports car. 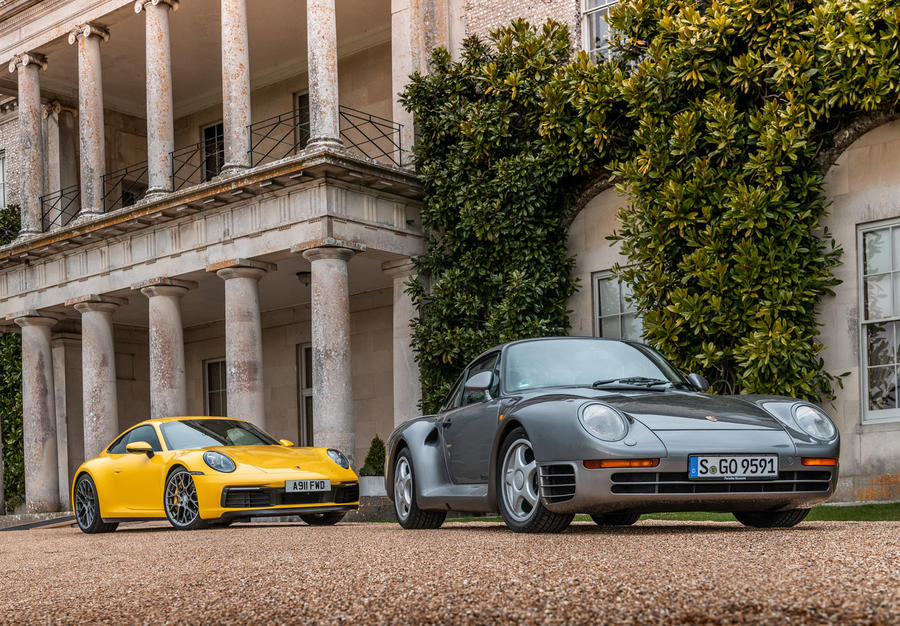 So it seemed a good idea to take a new Carrera 4S to meet the 959. Unfortunately, with only around 300 being built and far fewer surviving, 959s are not exactly thick on the ground. Indeed, finding a car whose owner would let me drive the way such a car was designed to be driven was an insurmountable task. Happily, though, the Porsche museum was bringing a load of racing cars over to the Goodwood Members’ Meeting and was good enough to put a 959 on the back of the truck – an immaculate car that has only ever been owned by the factory and with a mileage barely into five figures.

It was the first time I’d driven the new, 992-generation 911 in public, having previously only skidded around a damp Hockenheim in one. And, if anything, the gap between it and its 991-gen predecessor seemed even greater on the road than it had on the track. I count myself as a big fan of the standard 991 in almost all respects, save the fact that it only feels like a 911 if you drive the door handles off it. And I wrote that if the 992 had one job to do, it was to make the driving experience more accessible. And it has: not only is it a little more fun to drive, but that entertainment now comes in exchange for a lot less effort, too. It’s a fabulously easy car to enjoy and clearly the best new 911 of the past 25 years. It is the definitive state-of-the-art sports car. 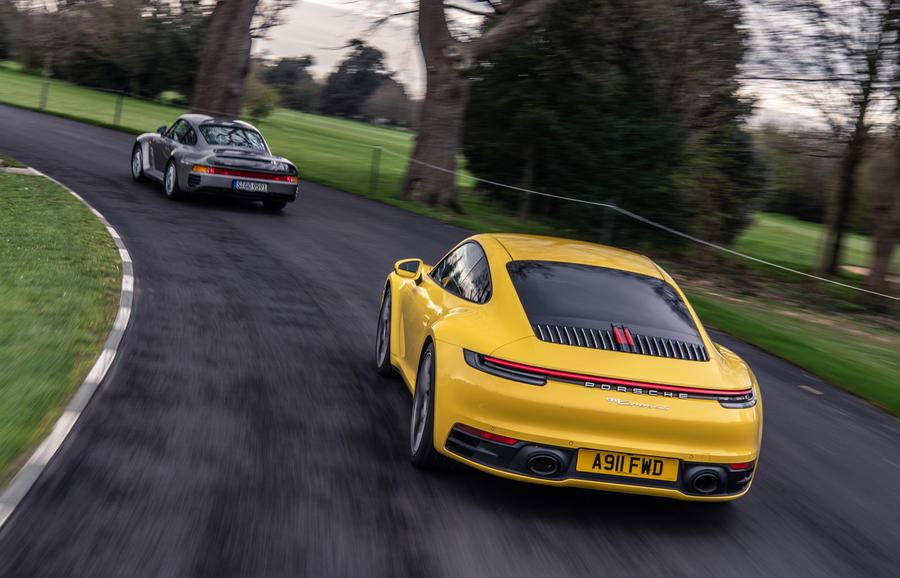 But the 959 set out to do something else: to be not merely of its time but years ahead. Decades, in fact. It was made from space-age materials such as Kevlar and Nomex. Its wheels were not only magnesium but hollow, too, their spokes full of the same air as the bespoke Bridgestone RE71 run-flat tyres. Yes, really. It looked like an artist’s interpretation of a 21st century 911, but that shape was in fact designed to allow maximum aerodynamic efficiency while keeping the whole thing on the ground as 320km/h approached.

Yet inside, it doesn’t look futuristic at all. It looks quite like the 964 generation of the 911 that followed on soon after 959 production ceased in 1988. But the clues are everywhere: the ‘959’ etched into the steering wheel, the six-speed gearbox, the 7200rpm redline, the torque distribution gauge, the 350km/h speedo, the ride height and damper control switches… I could go on, but you get the picture. 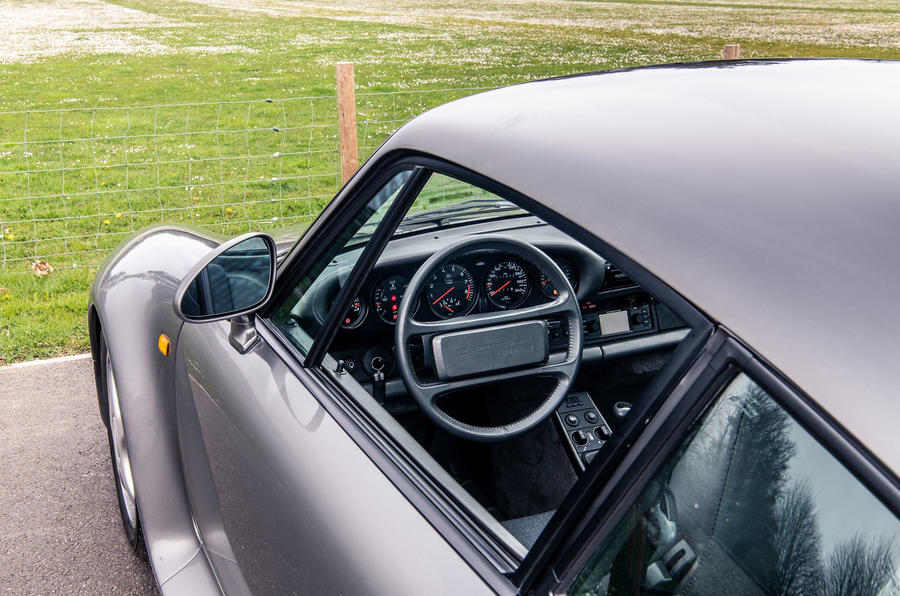 I’ve driven only one 959 before, very briefly and many years ago, yet so much of what I can see and touch is generic middle-ages 911. I can operate it without even thinking about it, let alone requiring tuition. When the engine fires, its sound is that of an air-cooled 911 even though it is one of the most extraordinary motors ever to find its way into a road car. It’s a 2.85-litre motor when the 911 of its day had a 3.2-litre engine and has turbochargers working not in parallel but series: one little turbo to spool up fast and minimise low-rev lethargy handing over to another far bigger turbo once the revs were up. Not only that, but it came with watercooled, twin-cam heads with four valves per cylinder. Truth is it was a far closer relative of the 962 Le Mans car engine than that of any other road-going Porsche.

Yet it’s quiet and tractable. The clutch is gentle, the gearshift beautifully engineered and precise. And then you put your foot down and the car’s character changes. There’s a distant whoosh as the car picks up the pace. There is far more lag than you’d find in the 992, of course, but it feels strong as the revs rise. The chassis feels soft, far softer than the 992’s, and the old 911 nose bob cannot be missed, but this old dear is doing well – pulling hard, holding its head up against a car born an entire generation later. And then… 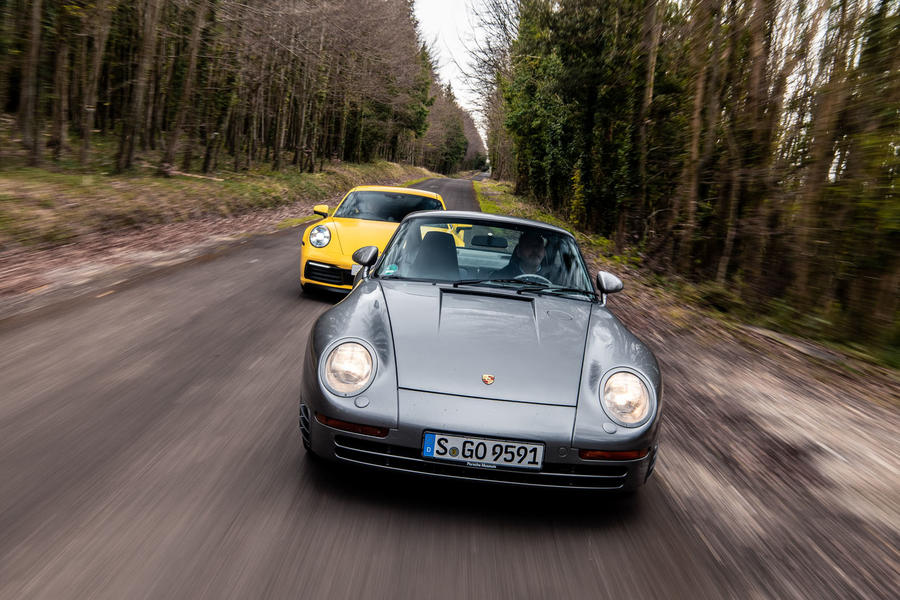 And then you hit 4800rpm. Which is where the big turbo cuts in. At once, you realise that, up until now, the car has been barely trying. It doesn’t press you back in your seat: it slams you rearward. The revs are rising far more rapidly than they ever did in the 992 so now you need another gear, fast. The ratios are perfect because the needle drops back down to exactly 4800rpm and the whole show starts again. By 2020 standards, this 959 is a startlingly quick machine. In 1986, it must have felt like an artillery shell.

For a moment, I ponder why its acceleration figures are so close to the 992’s for, in truth, the older car feels far faster. And then I realise: old tyre technology, no instant shifting, no launch control, no traction control, and still it loses only 0.1sec to 100km/h compared with a brand-new 911. 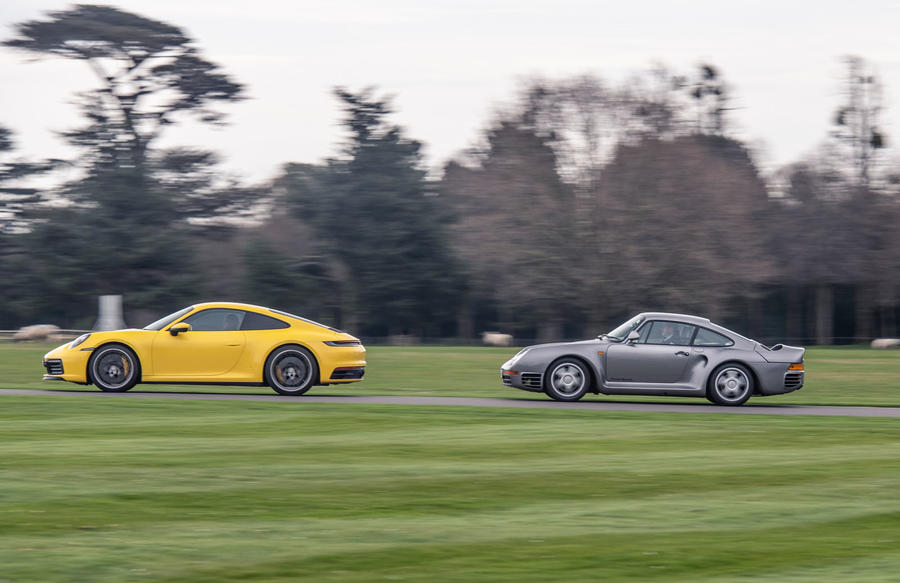 Of course, there would be no contest at all point to point. The 959 has an engaging chassis and those Bridgestones grip hard despite being mounted on skinny rims of just 17in diameter. But you can feel every year of progress in the 992’s grip and composure, and while I didn’t much feel like smoking the 959’s brakes, I know it would lag even further behind the 992 when it came to stopping power. Also, being Porsche’s first stab at four-wheel drive, there is no space in the nose for a boot, whereas the 992 offers rather generous amounts of luggage space.

But the question is: do they feel related? And the answer is that they do, but distantly. They share that sense of engineering integrity, some elements of their sounds and shapes, and positioning as long-distance touring cars as well as being out and out sports cars. And so normal does the 959 feel that you could even end up being disappointed by it. At least until you hit 4800rpm, whereafter your brain will be well and truly boggled. 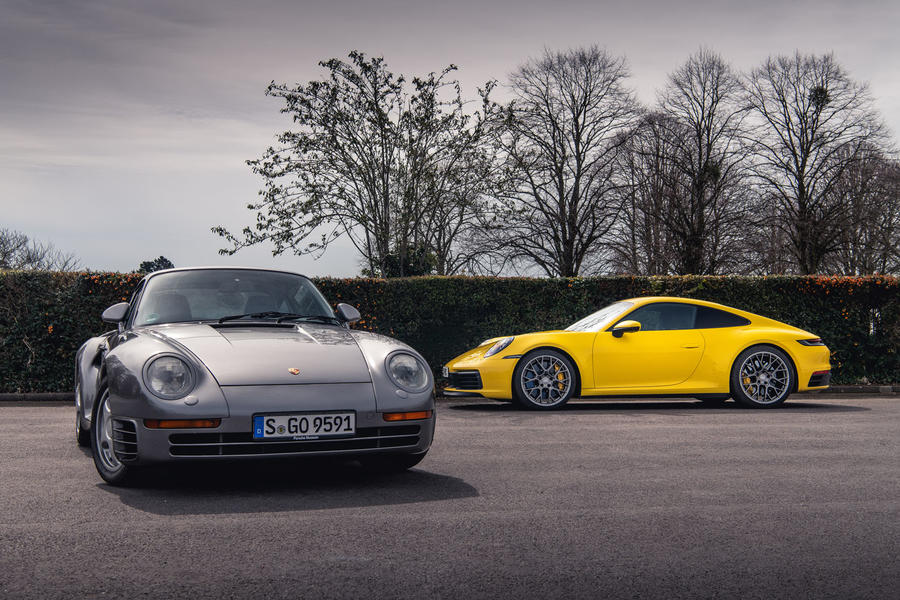 More than anything, I loved the 959’s split personality, the way it was so civilised until the right moment presented itself, at which point it turned into a magnificent maniac. In that regard, the 992 Carrera 4S is perhaps not the correct modern equivalent after all, despite their on-paper similarities. What’s needed is a car with a superbly flexible engine that is nevertheless capable of entirely overwhelming even the best developed of all-wheel-drive Porsche platforms.

Folding-roof 911 is as monstrously fast as the coupe, only with added drama
Read more
Facebook