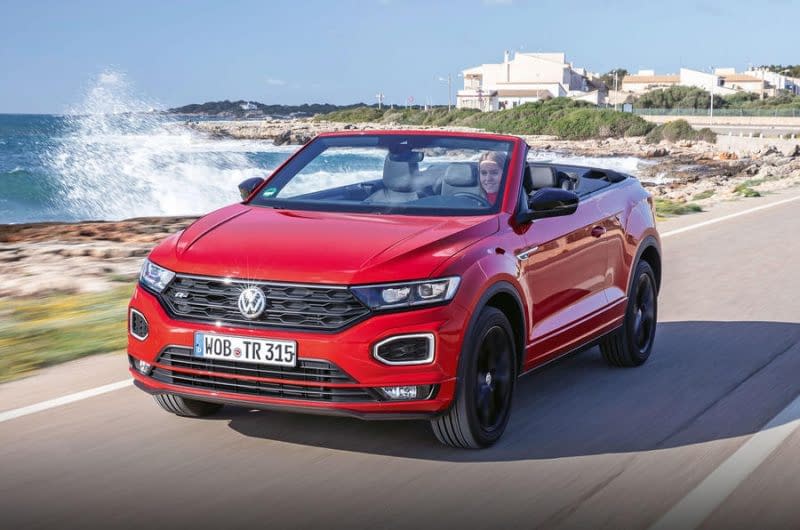 VW’s all-new model hits the road in Europe on our first drive review.

Adding handsomely to the weight, reducing the structural rigidity and compromising the versatility of one of the most popular crossovers on sale right now doesn’t seem an entirely clever idea. But that’s exactly what Volkswagen has done.

The new T-Roc Cabriolet indirectly replaces the Golf Cabriolet, and with the Beetle now also gone, that leaves the Karmann-assembled T-Roc as the brand’s sole open-top model.

The styling remains well balanced when the soft-top is in place. It’s a multi-layer fabric structure designed to mimic the lines of the fixed-roof model. To package it, Volkswagen has made some notable changes to the platform, the most significant of which is the addition of 37mm to the wheelbase, which in turn adds 34mm to the overall length. There’s also a number of added strengthening measures within the floorpan, sills, doors and windscreen.

The four framed doors of the T-Roc hard-top have also made way for a pair of longer frameless doors, and subsequently the B-pillars have gone, too. 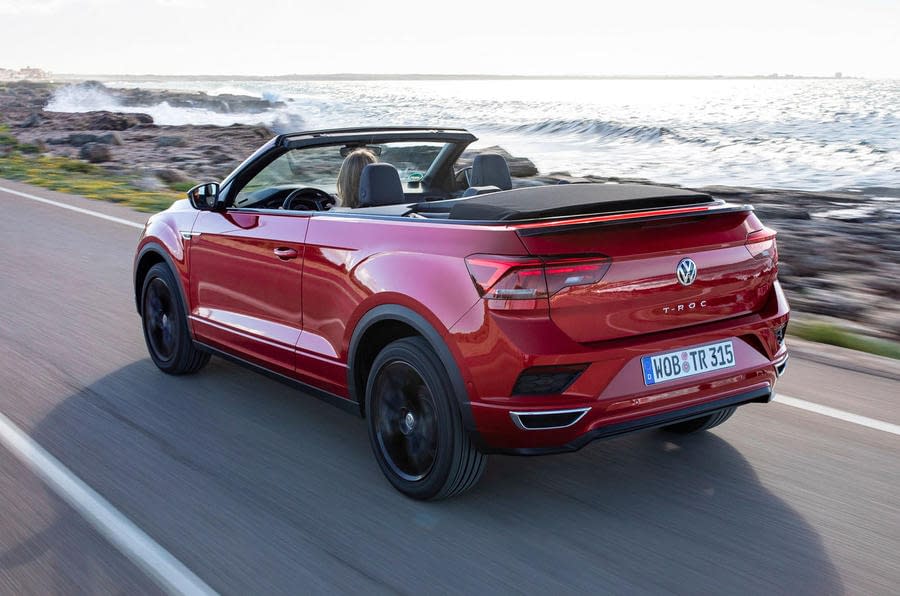 The changes to the underbody come with one big drawback: the car driven here weighs 194kg more than its regular equivalent, and it struggles to hide that heft. The turbocharged 1.5-litre four-cylinder petrol engine, with 110kW and 250Nm, is terrifically flexible and quite willing to rev, but it has to work harder while on the move and demands more gear changes to achieve this. 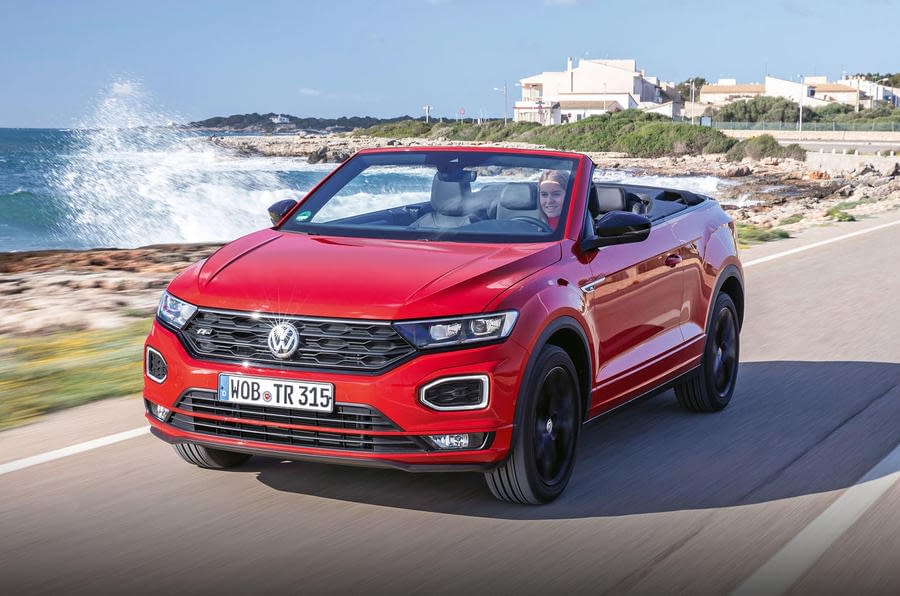 Despite its firm damping, the T-Roc Cabriolet isn’t a car that likes to be pushed too hard, either. Body roll is pretty well controlled – there’s a lower centre of gravity, due to the lighter roof and added weight concentrated within the platform – but flex and shake is quite noticeable, especially on less than smooth surfaces, and this ultimately limits the T-Roc Cabriolet’s dynamics. The ride is more fidgety and you can’t escape the shimmy through the body during cornering.

It’s not all bad, though, because adopting a more moderate speed and lowering the roof provides a chance for the car to display more favourable traits. At a gentle cruise, it’s very much in its element, even if the effect of flex and shake never really disappears completely. The seven-speed dual-clutch automatic would be our choice, but the six-speed manual is light and precise in its action.

The swift operation of the roof, which lowers and stows above the luggage compartment behind the rear seats in just 12sec, provides an al fresco experience at the press of a button. With the windows up, there’s very little wind buffeting up to around 130km/h, making it quite pleasant as long as the road isn’t too challenging. Still, it’s unusual. Forget any notion about it being sporty: you sit at a typical SUV height without a roof over your head. 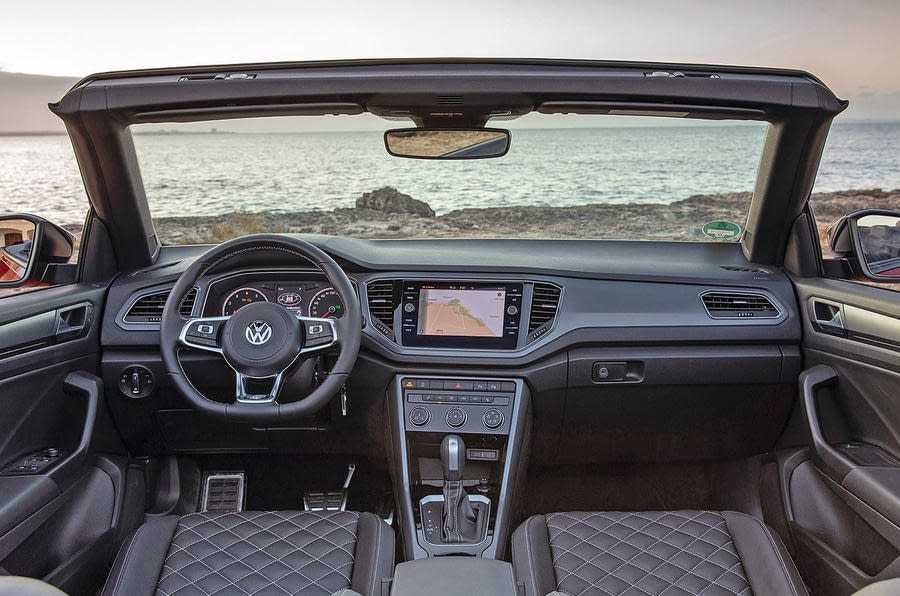 The front of the interior mirrors that of the regular T-Roc, with a hard plastic dashboard and a mix of precise controls and inoffensive but not exactly luxurious trim materials. You can choose Active Info Display digital instruments as part of a long list of options, which also includes a superbly intuitive infotainment system and the well-bolstered sport seats of our test car.

The driving position immediately feels more intimate than that of the hard-top, due to the added rake of the windscreen and proximity of its header rail, which sits uncomfortably close within your peripheral vision. It’s better, then, to lower the height of the seat squab. The problem with this, though, is that you find yourself enclosed within a car that has a relatively high shoulder line, shallow glass and a high rear end, making overall visibility a key weak point.

The open-air experience doesn’t come without its compromises in other areas, either. When it’s down, the roof robs the boot of space and versatility. It shrinks from 445 litres in the hard-top T-Roc to just 284 litres and the narrow aperture restricts the loading of bulky luggage.

It’s easy to understand why you would look at buying the T-Roc Cabriolet. From the outside, it promises the best of both worlds: the versatility of an SUV and the open-air driving appeal of a convertible.

The reality, unfortunately, is that it’s compromised on both fronts.

VW’s new sales model: buy the car, then buy the...

The concept of paying to unlock features already built into the car will be anathema to many, but there could be benefits to buyers
Read more