When Zak Brown landed in cold and draughty England 30-odd years ago with dreams of becoming a racing driver, he was driven by his deep passion for motorsport rather than anything that really counted – such as a budget, for instance.

Nevertheless, the Californian booked himself into a week-long course at Donington Park’s Jim Russell racing school and struck up what turned out to be a defining friendship with his instructor, established racer and Yorkshireman Richard Dean. To Dean’s surprise, Brown refused to leave at the end of the course and ended up sleeping on his sister’s sofa. The guy meant business.

The only problem was that it turned out Brown didn’t have what it took to become a professional racing driver. So he changed tack, built up a sports marketing business that became one of the most influential in global motorsport, then sold it with an eye on bigger ambitions. Today, he finds himself at the head of his favourite racing team, McLaren, and the owner of one of the world’s fastest-growing and impressive collection of racing cars.

To house the collection, it helps that in 2010 he co-founded with his old mate Dean a sports car team, United Autosports, which has just moved into a new 62,000sq ft base. As United Autosports forges ahead at Le Mans and in sports car races around the world, Brown must pinch himself every day as he takes on the challenge of guiding McLaren back to the top of Formula 1.

He also stands out for owning one of every model he’s picked in this list of 12 influential cars.

“Placing my top dozen cars into any type of order representative to which one I like more than another is impossible because they all inspire significant feelings for me,” he says. “I’ll break them down by road cars and race cars, and I’ll go from newest to oldest for the road, vice versa for the track. So that’s the reason they’re in this order, not necessarily because I like one more than another.

“I’ll start with road cars, where I guess the only theme would be power. They’re all totally different, but I like things that are collectable, so they’re all limited-edition cars. If you had to pull one common theme, they were all in their era the hottest sports cars to have.” “This is the most recent addition to my collection. The Speedtail is one of the fastest road cars in the world. It’s not really a take-off of our 1990s McLaren F1 but it is the second three-seater we’ve done with a [driver’s] seat in the middle. But what I like about it is it’s extremely rare: just 106 will be made. The ergonomics are unbelievable. I’m not a small guy, but it’s extremely comfortable because you’re sitting in front of the passengers and you’ve got all this glass around you. It’s very easy to drive. But when you put your foot down, it’s the fastest road car I’ve ever been in. The Speedtail is very exciting.” 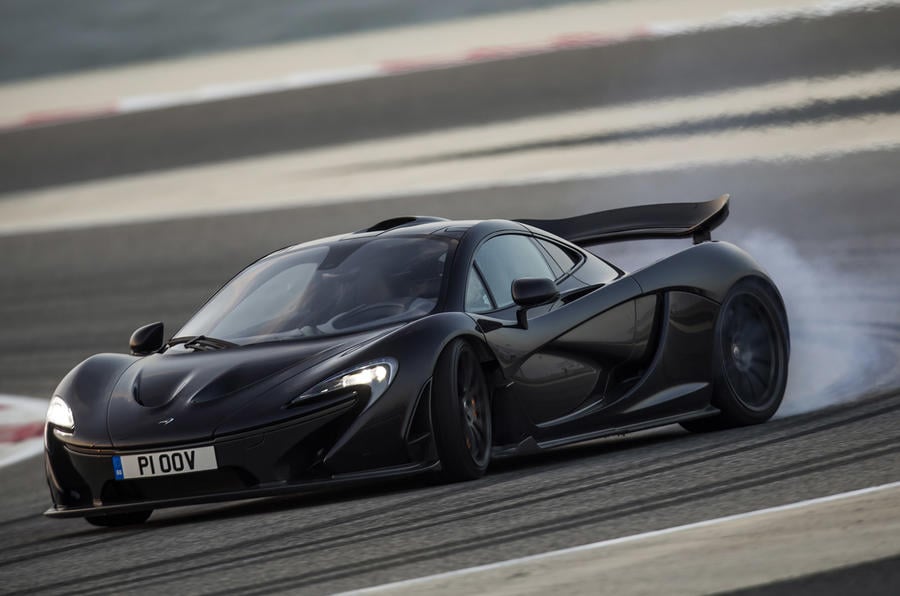 “You’re going to see a trend here, but that’s only because I’m going by date. Next is my 2013 McLaren P1. I had a 675LT, which is a great car, and then I drove a P1 and the first thing that struck me was the sound of the turbo wastegates. It looks unbelievably gorgeous and mine’s in Volcano Orange. The performance is outstanding. It feels much more like a high-performance car than the Speedtail, which feels like a cruiser in comparison. The P1’s quite aggressive, very aggressive looking and an awesome car.” 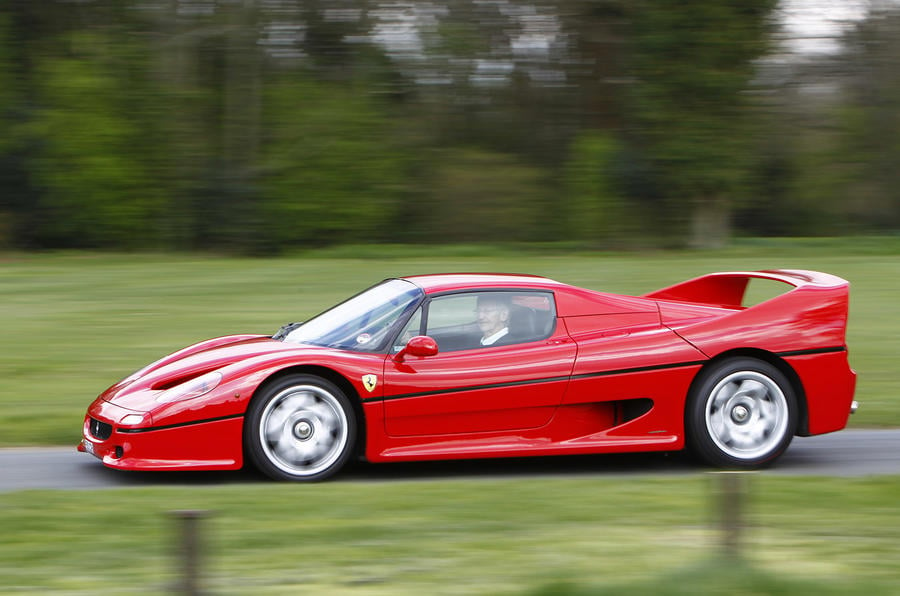 “No, they’re not all McLarens. The Ferrari F50 is an iconic car and mine is one of 30 in yellow. It has a 4.7-litre V12 developed from the 3.5-litre Formula 1 engine that powered Ferrari’s great 1990 grand prix car, the 641. It was the last with a manual shift gearbox and it’s an awesome-sounding car. I love it. Who doesn’t love gorgeous Ferraris?” “Mine has been restored by Californian ex-racing driver Bruce Canepa. Bruce was the importer who made the cars road legal when they first came to the US. And Porsche is the only manufacturer I’ve come across that would actually suggest you take one of their iconic cars to somewhere other than their own place. Bruce has done three generations of the 959. I’ve got the most recent generation and it’s a gorgeous-looking car. It’s understated. If you know about cars, you definitely know what a 959 is, but if you’re not a big car enthusiast and you don’t know what you’re looking at, it kind of looks like a 911, and kind of like the Speedtail but from a different generation. It’s very easy to drive – just like a 911 until you put your foot down. A four-wheel-drive, circa-800-horsepower monster that is very much an easy daily driver.” “So now on to race cars, where I’ll start with the oldest. Again, you’re going to see a trend here with McLarens, but that’s why I love working at the team: I’ve always been a massive McLaren fan. I would start with my McLaren M8D that Dan Gurney won two races in during the 1970 Can-Am series (Canadian-American Challenge Cup). I’ve always loved Can-Am cars. You talk about horsepower: nothing’s really had as much. And then to me it was significant as it was the end of the Bruce era because it was unfortunately in an M8D he had his fatal accident at Goodwood in June 1970. His friend Dan replaced him – and Dan Gurney was a legend. This car’s very special to me because it kind of feels like the passing of the torch from Bruce, and it’s an awesome car to drive.” “Mario Andretti took the first of six wins in my car, chassis two, in the 1978 season when he won his world championship. Andretti is one of my most favourite drivers, a hero of mine and now a great friend. It’s a real privilege to know Mario. There are so many cool things about the Lotus 79: one, it won the championship; two, it won the championship in the hands of Mario Andretti. I don’t think there was a more iconic livery than the JPS Lotus. And then there’s Colin Chapman, who with this and the preceding Lotus 78 became the first to properly harness ground effects in F1. It’s one of the most famous cars in grand prix racing.” “Sticking with date sequence, I then come to the Porsche 935. I’ve got the JLP3 in which Rolf Stommelen, John Paul Jr and Sr won the 1982 Daytona 24 Hours. Father and son also won the Sebring 12 Hours in the same year, and the ’82 US IMSA championship, scoring five wins in a row. At the time, it was the only car to have won Daytona and Sebring in the same year. I love driving it and I race it often. Big flared-out fenders, lots of horsepower… the 935s are awesome race cars.” “Then I come on to another Porsche. The Blaupunkt car I own I watched race when I was growing up. It won five races in period with Price Cobb, James Weaver and Rob Dyson and it raced between 1986 and ’88. I loved IMSA, America’s national sports car racing series, and I still love IMSA. The 962 is a gorgeous-looking race car, especially in that Blaupunkt livery.”

“I’m a big fan of Indycars, and again it all comes back to Mario Andretti. I went to the Long Beach Grand Prix in 1987, a street circuit that means a lot to me because my first ever race was the 1981 Long Beach F1 Grand Prix. By ’87, I had aspirations of trying to get into the business as a race car driver. And Mario put this car on pole position and won, lapping everybody up to second place, although Emerson Fittipaldi gave him a good run until he had a mechanical failure. In this same Lola, Mario then put it on pole at the Indianapolis 500 and led 171 of the first 177 laps. Again, he’d lapped the field, until a broken valve spring ended his day – the old ‘Andretti Curse’ at Indy, a race he won only once back in 1969. This Lola holds very special memories for me because I saw it race, and again because of my hero Mario. His T87 was also engineered that year by Adrian Newey, who has become a good friend. We restored Mario’s car and shook it down last year in Chicago, and Mario came out and drove it, with Adrian watching on. A special day.” “Staying on the Indycar theme, one of my other favourite drivers was Emerson Fittipaldi, who won the 1989 championship in the car I own. He also won the Indy 500 that year after one of the most dramatic finishes in the race’s history, in a duel with Al Unser Jr. I’ve always been a big Fittipaldi fan, who of course was McLaren’s first F1 world champion. Much like Mario, it’s really cool that he won titles in both F1 and Indycars. Also, my number one most admired individual in motorsport is Roger Penske, so this car counts for a lot. It was run by Pat Patrick and I was fortunate enough to get offered the car directly by Roger. It ticks a lot of boxes.” “To finish up where were started, it’s another McLaren: the MP4/6 in which Ayrton Senna won the 1991 Formula 1 world championship – the first McLaren to be powered by a Honda V12 and the last Formula 1 car to win the title using a V12 engine and a manual gearbox. In my particular chassis, 6, he won the Monaco Grand Prix. Ayrton was another of my favourite racing drivers, driving for my favourite race team. No wonder it’s another car that ticks absolutely every box for me.”

The child-sized replica of the McLaren GT is priced from $300, and is designed for kids aged between three and six
Read more