The new RS E-tron GT will be Audi’s most powerful production model yet and here’s what we know so far.

Audi has detailed its new RS E-tron GT ahead of a full unveiling early next year, confirming that the electric super-sedan will be its most powerful production model yet. In fact, we have a good idea on what it will be like after our first prototype review.

The flagship version of the electric grand tourer, which Autocar has driven in prototype form here, will use two motors to produce up to 475kW – some 19kW more than the R8 Performance currently gets from its normally aspirated 5.2-litre V10.

However, that headline performance figure is only available in particular instances, such as during launch control starts. Under normal driving conditions, the RS E-tron GT’s 175kW front motor and 335kW rear motor combine to deliver a total system output of 440kW and 830Nm. Audi hasn’t confirmed exactly how quickly its new flagship electric car will cover 0-100km/h, but Dennis Schmitz, technical project manager for the RS E-tron GT, confirmed to us that it will be “quite a bit quicker than 3.5sec”. Top speed is set to be limited to 250km/h. The car uses the same J1 platform as the Porsche Taycan.

Like the Taycan, Audi’s new EV flagship makes use of an 83.7kWh (net capacity) lithium ion drive battery, which sits flat between the axles. Schmitz confirmed that Audi is anticipating a WLTP-certified range of 400km. Hooked up to a 350kW fast charger, the battery can be topped up to 80 per cent charge in as little as 22.5 minutes.

Although the electric Audi shares much with its Porsche counterpart, Schmitz insists the E-tron GT has its own distinct identity. “We share the components, but we do all the application to make it look and feel like an Audi. That’s really important,” he said. 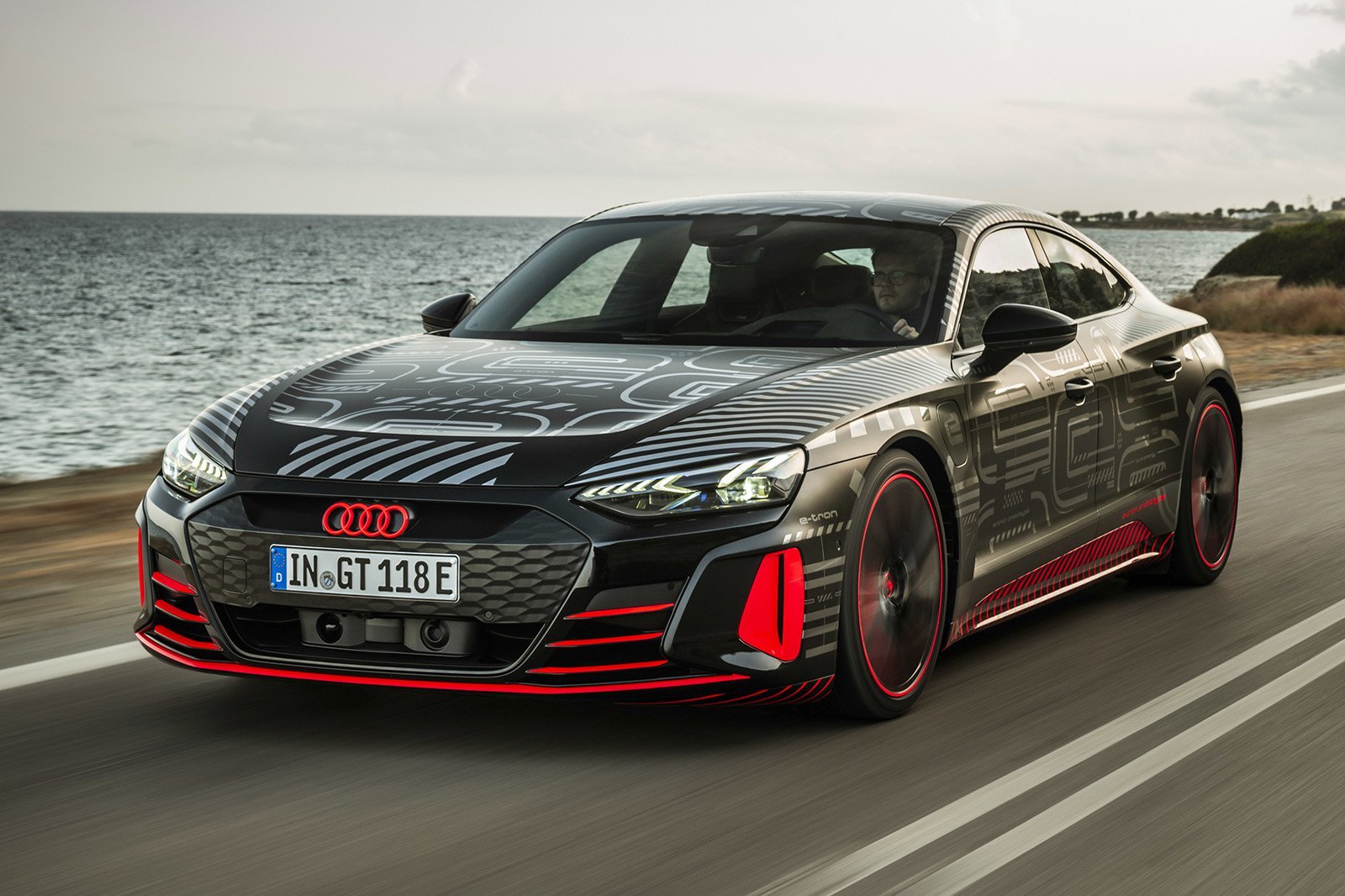 “For us, we’re building more of a gran turismo. It was important to have a car that’s not only super-sporty in Dynamic mode, but one that’s also comfortable for daily usability. So we have a quiet car, with four doors. The emotional sound is really low in this stage [Comfort mode], and we wanted it so that you didn’t hear much from the engine or from the road.

“It’s the same for the steering. We don’t believe that the hand forces need to be very high to get a sporty feeling. We wanted to be a little bit more on the comfortable side, also supported by the rear-wheel steering that helps you to have an easier time manoeuvring at low speeds, coming to everything like the seats and the complete feeling of the car. We wanted everything to be shaped like a GT.” Despite the car’s capabilities as a comfortable long-distance tourer, Schmitz believes the instantaneous performance and responses that EVs afford will be a key draw for people more accustomed to high-performance vehicles of a more traditional flavour.

“The biggest change you have is the instant torque from low RPMs. You can feel it. It’s so much fun to drive and so much easier to control the car because you have no gap, no lag. As soon as you tip on the pedal, you have an instant reaction from the motors.

“Even if you want to position the car in the turn from slight understeer to a little bit of oversteer, you can do it on the pedal, immediately. I think that’s what people will really like about electric performance.”

When asked why the RS E-tron GT didn’t develop as much power as the Taycan Turbo and Turbo S models despite using the same basic components, Schmitz referred back to the gran turismo brief.

“If you look at the Audi range, what we have built here is the most powerful RS that we’ve ever had in terms of acceleration, in terms of horsepower, of kilowatts. “This was important for us: to show the electric spearhead for Audi. That’s why we chose this positioning. It fits in more with the gran turismo idea. If you drive it, you will see there’s more than enough performance. It fits perfectly in the Audi portfolio.”

That said, when quizzed on whether there would be an even faster RS Performance model, Schmitz remained open-minded: “Everything is possible, but let’s say for now that we have the RS and the regular. For now, that’s what we want to show. But you know our portfolio: everything is possible in between.”

Performance figures for the standard E-tron GT are yet to be confirmed, but Audi expects it to be priced around the £100,000 mark, which is AUD$180,000 locally. Its European arrival date is slated for March next year. Audi has launched a new PHEV version of the Q3 SUV, sporting the same hybrid as the Volkswagen Golf GTE. Audi has pulled the wraps...
Read more
Facebook