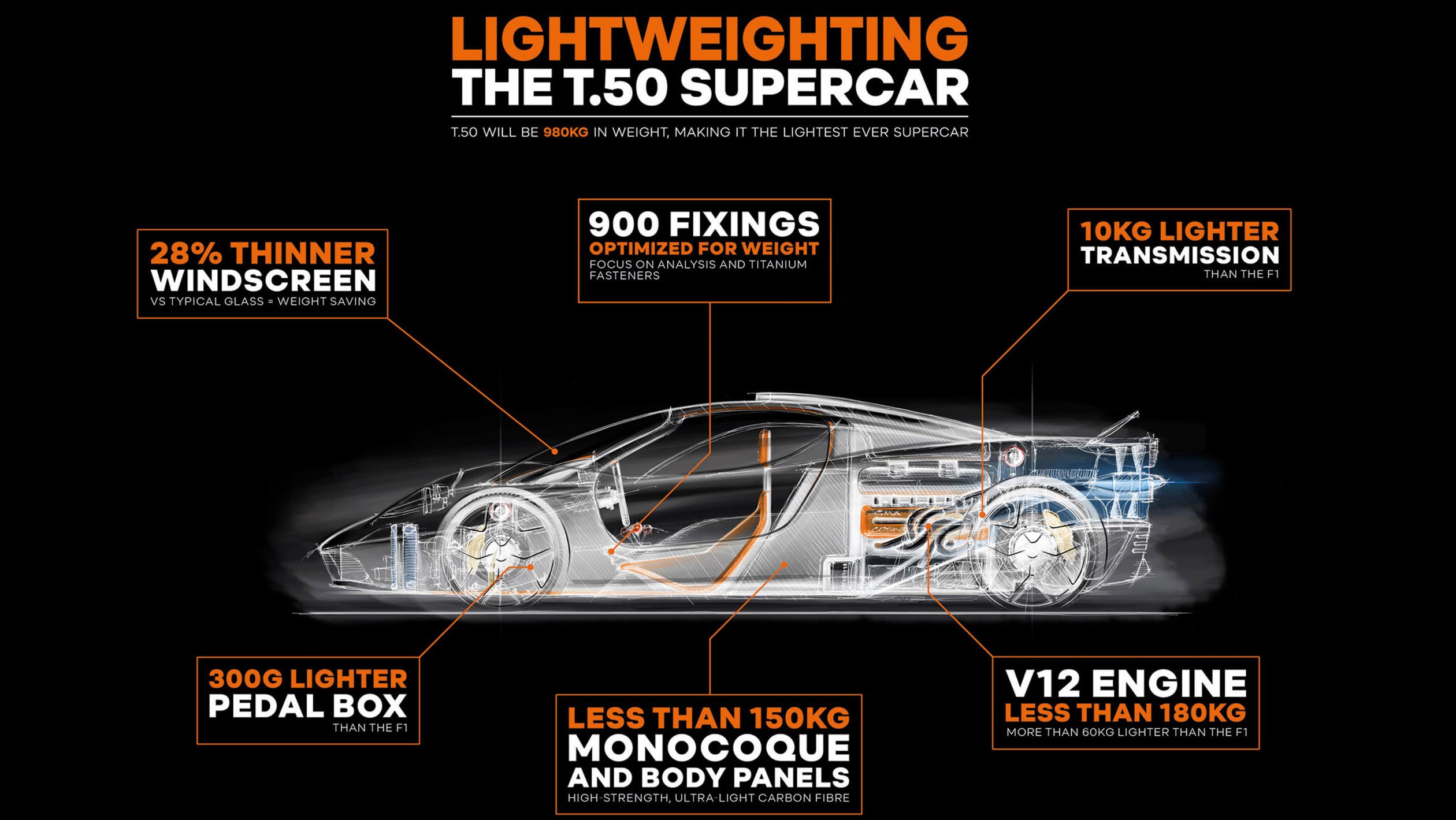 The Gordon Murray Automotive T.50 is a new ‘analogue’ supercar from the McLaren F1’s creator and it will use a brand new 3.9-litre V12 from Cosworth.

Gordon Murray Automotive has released more details on its upcoming, McLaren F1-inspired T.50 supercar, including the specific weight of its powertrain and monocoque. The finished product is expected to make its official debut in May next year, before going on sale in 2022 – with each example carrying a price-tag of $3.7 million.

The T.50 was dreamt up by the legendary motorsport and automotive engineer, Professor Gordon Murray, who is responsible for the McLaren F1 and the controversial Brabham BT46B fan car. His latest project will be built in Britain in a limited production run of just 100 road-going units, with a further 25 honed for track use.

It will be powered by a naturally aspirated 3.9-litre V12 engine, which was developed by Cosworth. The engine is supported by a 48-volt mild-hybrid system and produces 478kW as standard – although 515kW is possible using ram induction. The engine weighs less than 180kg – roughly 60kg less than the McLaren F1’s powertrain – and it has a red-line of 12,100rpm, which makes it the highest-revving engine ever fitted to a road car. It’ll send drive to the rear wheels only via a six-speed manual gearbox.

The T.50 has been designed with a fastidious approach to weight-saving. Its carbon fibre monocoque weighs around 150kg, while GMA claims the entire supercar will weigh less than 980kg. To achieve such a low kerb-weight figure, GMA has shaved grammes of excess weight off nearly every component in the T.50’s structure.

The supercar’s pedal box is 300g lighter than the McLaren F1’s, while its transmission is 10kg lighter. Its windscreen is made from ultra-thin glass, which is 28 percent thinner than the glass in a typical road car. Meanwhile, the driver’s seat weighs just 7kg – and the two outboard passenger seats weigh less than 3kg each.

GMA’s engineers even modelled the diameter and length T.50’s fixings, to ensure they’re only as strong as they need to be. On the completed product, these 900 nuts, bolts and washers around the T.50’s chassis will be finished in titanium, to keep the supercar’s kerb-weight to a minimum. Our most recent official image gave us a reasonable indication of the finished model’s styling and revealed some of the groundbreaking aerodynamics that the car will employ. This includes a large 400mm ground-effect fan, inspired by the Brabham BT46B Formula One car, which Murray designed in the late seventies.

But the T.50’s complex aerodynamic systems extend beyond the fan. The car also has active under-body elements and rear aerofoils – and there are six different aero modes. We’ve also been told that the V12 engine and traction control settings will all be configurable.

Until now, all aerodynamic testing on the T.50 has been simulated on a computer through the use of fluid dynamics software, or performed in wind tunnels using static models. However, physical prototypes of the car are being readied for development, with the first driveable development mule set to be completed this September.