Lamborghini’s new track-only Essenza SCV12 hypercar packs the company’s most powerful V12 engine yet, with more than 610kW on tap.

Its naturally aspirated 6.5-litre powerplant produces at least 8kW more than the Sian hybrid hypercar. However, unlike that car, the Essenza SCV12 cannot be driven on public roads and will be even more exclusive, with just 40 examples to be built. The SCV12 has been designed by Lamborghini’s Squadra Corse racing division exclusively for track use and  features extensive mechanical, aerodynamic and chassis upgrades over the Aventador on which it is loosely based. The firm has previously hinted that it is plotting an entry into the new hypercar category at Le Mans 2021 and it’s likely the SCV12 will provide the basis for its factory racer.

Chief among the changes is a comprehensive aero package inspired by Lamborghini’s Huracan GT3 racer, comprising a dual-air intake on the bonnet, a roof-mounted air scoop, a sizeable front splitter and winglets that send air to the gaping side intakes, which in turn cool the engine and gearbox.

Together with the SCV12’s large, adjustable rear spoiler, the additions help the hypercar generate 1200kg of downforce at 250km/h – 400kg more than a McLaren Senna travelling at the same speed. 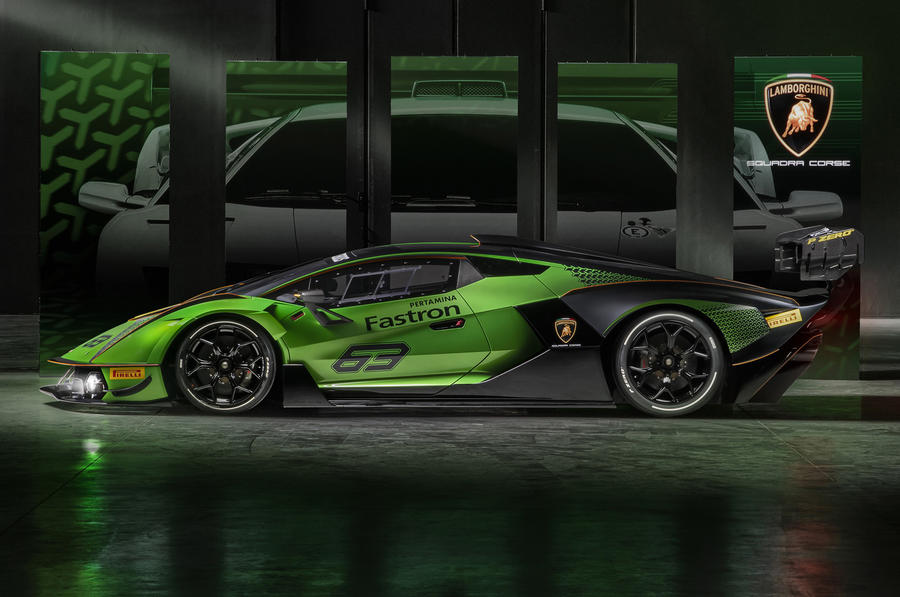 Modifications to the powertrain are more subtle and comprise a redesigned dual-exit exhaust system that is said to improve performance and produce a unique engine note, and a new Xtrac sequential six-speed gearbox, which forms a structural element of the chassis for maximum stiffness and compactness.

Chassis features inspired by race cars include the mounting of the push-rod rear suspension directly onto the gearbox, magnesium 19-inch and 20-inch wheels wrapped in slick Pirelli tyres and Brembo Motorsport-developed brake discs and calipers. The track car’s lightweight bodyshell is divided into three separate components to allow for quick replacement of damaged sections during pit stops and the overall shape is said to be inspired by 1970s prototypes.

The body is built around a new carbonfibre monocoque chassis, and although the car’s precise weight has not been disclosed, Lamborghini claims a power-to-weight ratio of 1.5kW per 1kg, suggesting the SCV12 tips the scales at just over 1600kg. The design features a number of hexagonal elements – including the shape of the front headlights and roof scoop – in common with the Sián and recently revealed Aventador SVJ Xago and makes heavy use, inside and out, of Lamborghini’s new Y-shaped motif, most prominently in the Y-shaped carbon structure that divides the driver and passenger seats.

Elsewhere in the Alcantara- and carbon-clad cabin, the SCV12 receives a multifunction steering wheel with an in-built telemetry display – modelled after those used in Formula 1 cars – a pair of FIA-approved carbonfibre racing seats and red door pull straps in place of conventional handles to save weight. SCV12 owners will be enrolled in what Lamborghini calls an “exclusive club”, which will allow them to drive their car on various global race circuits from 2021, store the car in a new purpose-built hangar at the manufacturer’s Sant’Agata headquarters and take part in the same athletic training programme as Squadra Corse’s racing drivers.

Squadra Corse engineers will be on hand at the customer track events, joined by five-time Le Mans winner Emanuele Pirro and Lamborghini racer Marco Mapelli, who will offer track driving advice to the 40 SCV12 owners.

Only 10 Xago models will be made to promote Lambo’s virtual customisation services, with sport hexagon-themed exterior and interior details
Read more