This is the MG Cyberster: a new concept car that could potentially point towards an electric return to the open-top two-seat sports car market for MG.

It’s the first time we’ve seen an open-top roadster from MG since the TF. It’s also the second all-electric sports car concept revealed by MG in the last few years. The car is a sportier, open topped counterpart to the E-Motion Coupe that the SAIC-owned brand first uncovered in 2017. The Cyberstar will be revealed in full next month at the 2021 Shanghai Motor Show. These first official images of the new car – which MG says is “a nod to the MGB Roadster of yesteryear” – are also provided with a strong tease that the company could look to put it into production. The company says it is “exploring the possibilities of a future sports car” with the Cyberster concept, the details of which will be expanded on further at the car’s Shanghai debut.

While it may well be a placeholder for a sensational return to the open-top sports car market, the Cyberster in its present form is still very much a concept car in design, though with plenty of nods to the MGB Roadster. 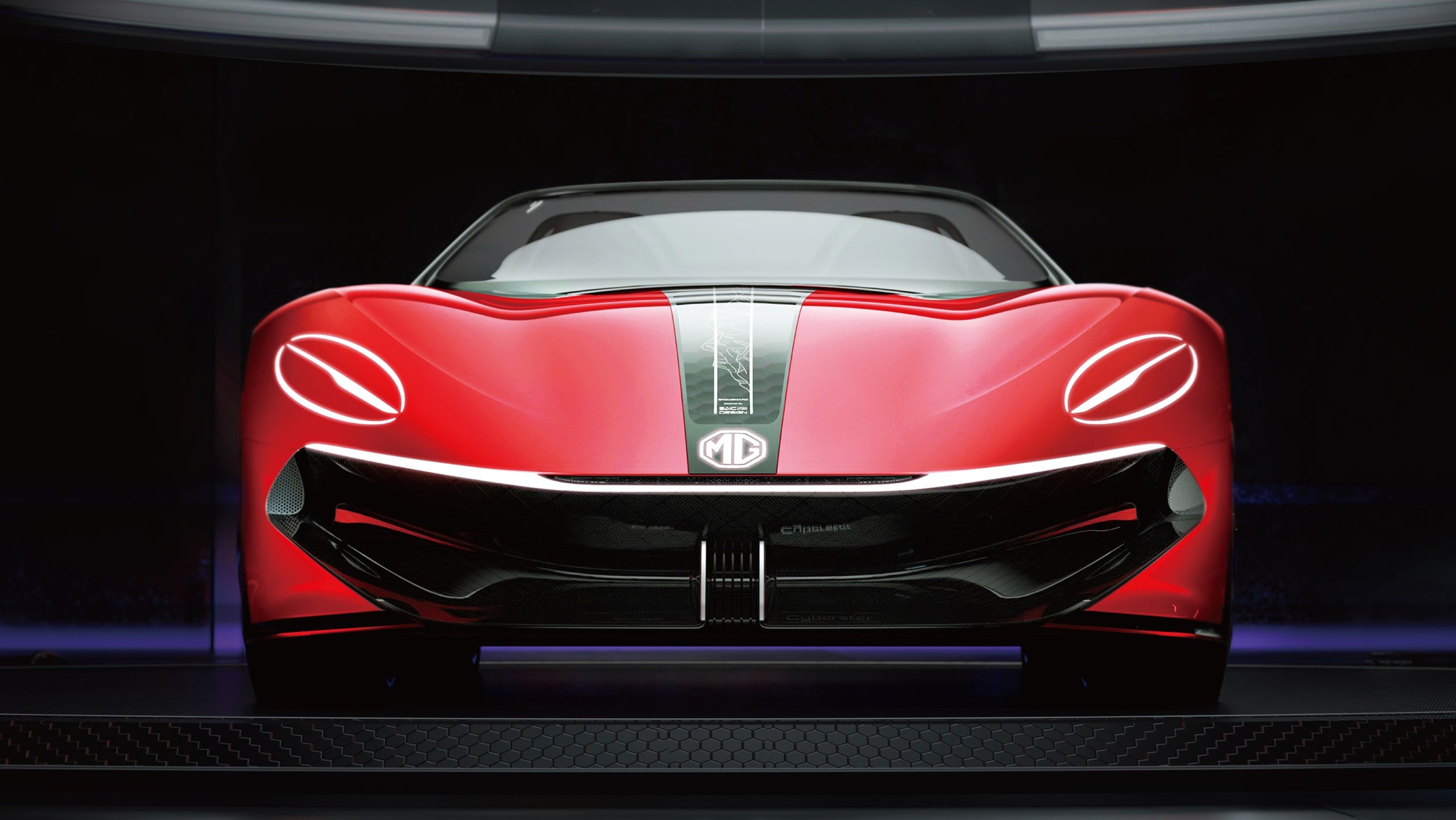 The low nose is finished with rounded headlights and a slim grille design, in what the brand says is a modern interpretation of the MGB’s front end. Below, a chiseled lip completes the sporty look. MG calls the headlights ‘magic eyes’, referring to their unconventional and interactive lighting signatures.

Running down the flanks of the Cyberster is a ‘laser belt’ LED strip, which is a subtle nod to the chrome trimline of the MGB. The strong ‘double’ shoulder line gives the Cyberster an imposing sports car profile, while the concept also appears to be a speedster, with no retracting roof at all. The rear of the car is defined by a flattened tail with a kammback rear end, which the brand says improves aerodynamic performance. The LED taillight signature is difficult to miss – two Union Flag style lighting elements are linked together by a full-width LED lighting strip running across the Cyberster’s tail. A vast diffuser is also in place and is partially illuminated.

The hyper-futuristic interior is divided in two by a long centre console which is home to a narrow portrait display through which the Cyberster’s on-board 5G connectivity features are accessed. The cabin is even more future-gazing than the exterior design, with a gamepad inspired steering wheel sitting ahead of what look like 3D digital instruments and what the brand calls “zero-gravity sports seats”.

MG has also revealed some technical specifications, which point to the Cyberster being a close rival for the upcoming second-generation Tesla Roadster. It is built on an “intelligent all-electric architecture” with a claimed range of 800 kilometres on a full battery. MG has even hinted at the sort of performance it envisages for the Cyberster, revealing the possibility of 0-100km/h in under three seconds.

MG has not given the green light to production of the Cyberster, but the firm is reportedly investigating crowdfunding as a way of helping finance its development through to production. Reports in last week suggested that a new sub-brand, MG Cyber, is aiming to raise around 10 million by offering early investors access to the car’s development process. Those who sign up would be able to contribute to decisions on colours, interior and exterior trim as well as the design of the car’s user interface. They would also get access to test drives of prototypes and potentially end up with unique MG Cybersters customised to their own taste.

There’s little evidence that MG would be able to use this approach beyond its domestic market in China. But the overall chances of the car making it to showrooms globally may depend on MG Cyber’s success in attracting not just expressions of interest but also cash investment.