Maserati is gearing up to launch the Grecale as its second SUV, and our spy photographers have caught it on camera for the first time, outside a manufacturer facility in Italy.

Parked alongside a variety of FCA/Stellantis prototypes, the Grecale is clearly a similar size to the Alfa Romeo Stelvio, with which it will share the bulk of its underpinnings, and despite heavy camouflaging and a fence obscuring most of the car’s final design, the influence of the larger Levante is evident.

The brand’s important second SUV is named Grecale after the “fierce north-east wind of the Mediterranean Sea”. The model forms a key part of Maserati’s bold revival plan that it launched last year with the reveal of the MC20 supercar.

Destined to play “a key role in the brand’s development”, the Porsche Macan rival will be built on the same production line as the Alfa Romeo Stelvio in the Fiat Chrysler Automobiles (FCA) plant in Cassino, Italy. Maserati is planning an investment of around €800 million (AUD$1.415 billion) in the plant. 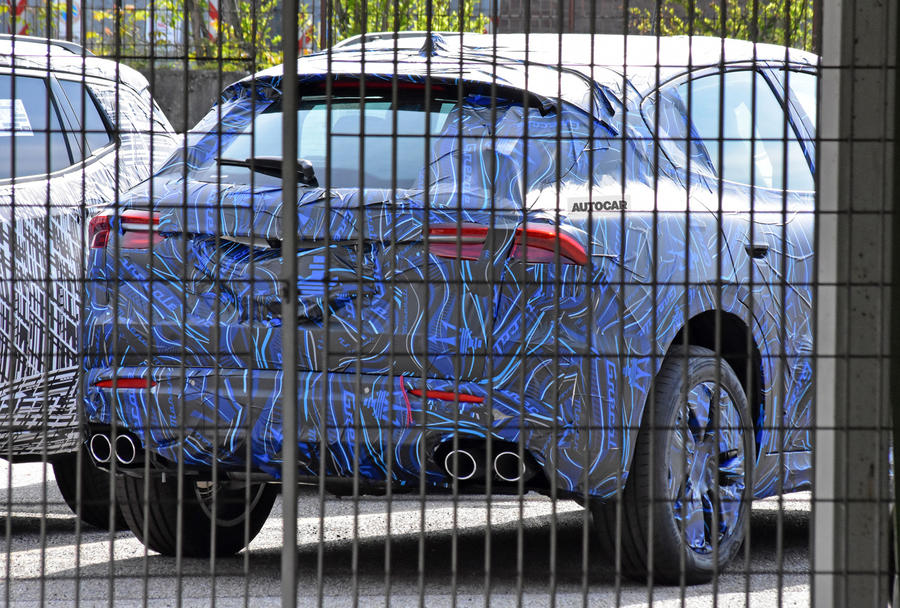 It will also share much of its underpinnings with the Stelvio, and a fully electric version is also due to arrive by 2022. However, the combustion-engined models will use Maserati rather than Alfa-sourced engines, likely including the mild-hybridised 2.0-litre turbo offered in the Ghibli and Levante, and a downtuned version of the MC20’s new Nettuno V6 for the most potent variant.

Maserati global planning boss Francesco Tonon told Automotive Daily’s exclusive partner Autocar the Grecale will be “the most practical in its class, but it will also be luxurious”, adding: “It will feature the best-in-class design and features. Of course, it’s still a Maserati but it will also offer best-in-class performance and handling”. SUVs are expected to account for 70% of Maserati’s sales by 2025, with saloons reduced to 15% and sports cars, such as the newly launched MC20, making up 5%.

The new SUV was first confirmed back in 2018 by former FCA boss Sergio Marchionne as part of a total overhaul of its product line-up. Also included are the MC20 in three variants: coupé, Spider convertible and fully electric, plus a new Granturismo and Grancabrio, due in both internal-combustion and electric forms. By 2023/2024, the brand will also have a new-generation Levante and Quattroporte, also both available with an electric powertrain. In top-spec form, this will use an 800V electrical system and three motors.