Bugatti has paid homage to the flying aces who piloted its race cars to historic victories in the early 20th century with a new special edition of its Chiron hypercar.

Named ‘Les Légendes du Ciel’ (legends of the sky), the limited-edition Chiron is limited to just 20 examples, with each costing €2.88 million (AUD$4.72 million) before taxes. Production is set to get under way before the end of 2020. Company founder Ettore Bugatti is said to have “admired the fearless character and technical expertise of his drivers, who were fascinated by high speeds” and who had often transitioned into open-cockpit single-seat race cars from similarly conceived fighter planes. The new special edition can be told apart from the standard Chiron by its unique ‘Gris Serpent’ matt grey paint, which, Bugatti says, is inspired by that worn by aircraft in the 1920s. A thick white racing stripe runs from the front to the back, while bespoke badging and subtle French flag motifs on the side round off the exterior styling tweaks. 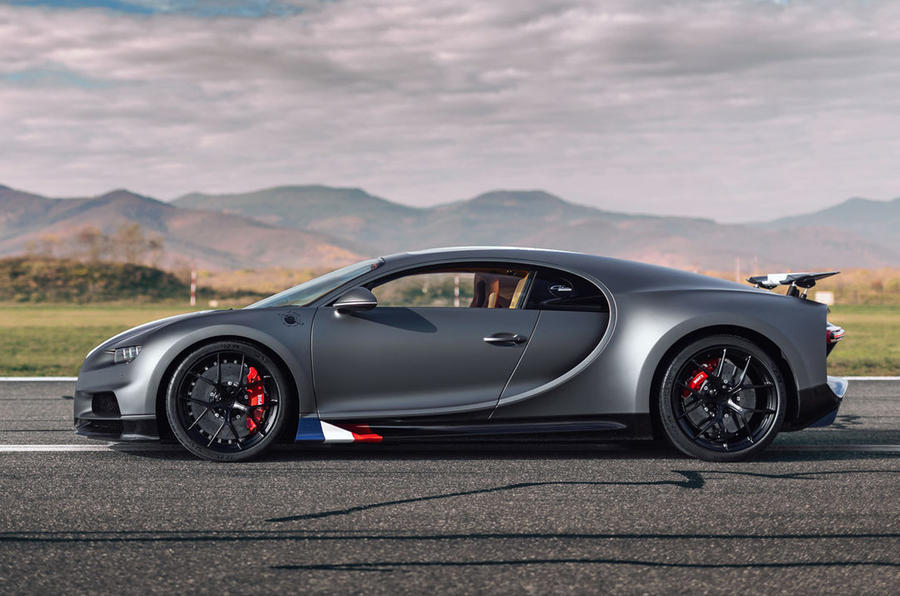 The aviation theme is carried over to the interior, where the door panels have been decorated with a “hand-sketched” depiction of a Nieuport 17 aeroplane racing against the legendary Type 13 racer – the first model to bear the Bugatti badge.

The Type 13 was instrumental in establishing Bugatti as an early front-runner on the global motorsport stage and its bare-bones cockpit is referenced on the new Chiron special edition with a polished aluminium armrest and centre console insert.

The light brown leather upholstery is also a nod to the past, taking inspiration from similar materials used in historic aircraft. Bugatti boss Stephan Winkelmann said: “Bugatti has had close associations with aviation since the company was established more than 110 years ago. Many successful Bugatti racing drivers, such as Albert Divo, Robert Benoist and Bartolomeo ‘Meo’ Costantini, flew for the French Air Force. The French aviator legend Roland Garros privately drove a Bugatti Type 18 to be as fast on the road as in the air.

“It is therefore almost an obligation for us today to pay tribute to the legends of that time and dedicate a special edition to them.” The Chiron’s mechanicals are untouched for the special edition, meaning the 20 cars so specified will still come with an 8.0-litre quad-turbocharged W16 pumping out 1103kW and 1600Nm for a top speed of 420km/h. There’s no word yet on whether this will be the final special edition of the Chiron, which was originally destined for a production run of just 500 units when it was launched in 2016.

Chiron sets a new benchmark for performance, capability and technology. Crucially it now adds driving enjoyment and engagement to the mix. What can you use...
Read more
Facebook