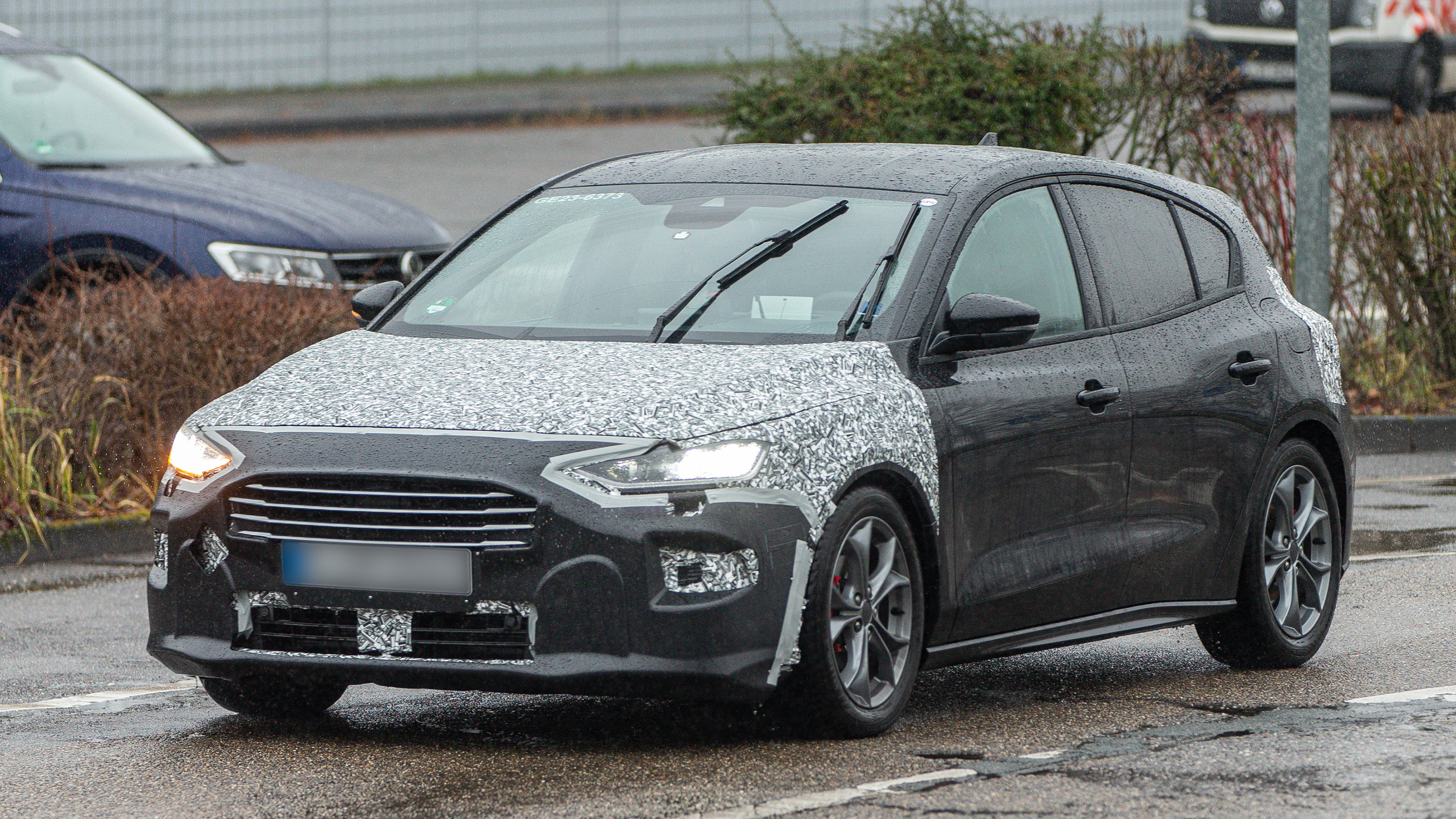 These spy shots offer our first look at the facelifted Ford Focus.

The blue oval’s refreshed family hatchback is expected to break cover at the end of this year, sporting a range of updates designed to keep it competitive with the Mk8 Volkswagen Golf and revised Hyundai i30.

This Ford Focus mule still wears heavy camouflage – extensive masking around the front suggests a reworked face – but despite this, we can still make out many of Ford’s proposed styling changes.

Ford has broadened the Focus’s lower intake slightly, while the openings to the side have been resized and moved – the parking sensor in the mould’s cutout occupies the space reserved for a fog lamp on the outgoing model. Changes at the rear appear to be minimal, stretching to little more than a pair of revised tail lamps.

We’re expecting a few tweaks to the interior, such as some new upholstery finishes and a fresh steering wheel design. However, it also looks like Ford has a substantial infotainment upgrade planned for the Focus.

Peer through the windows of this mule and you’ll see an enormous screen mounted on top of the dashboard, which could replace Ford’s eight-inch SYNC3 unit on higher-spec models. The old car’s 12.3-inch digital gauge cluster has survived the update intact, although it’ll probably feature some fresh new graphics.

Ford is unlikely to modify the Focus’s engine range for this facelift, as all of the hatchback’s powertrain have been designed with the latest Euro 6d emissions regulations in mind. So internationally petrol options will include a 1.0-litre three-cylinder unit, with either 91kW or 114kW, and a 2.3-litre four-cylinder for the hot ST variant, with 206kW.

Buyers will also be able to spec 48-volt mild-hybrid versions of the two entry-level petrol engines, which features a belt-driven starter-generator and a dinky battery pack mounted under the passenger seat. The system can provide an extra 24Nm of additional torque and helps to lower the engine’s fuel consumption.

Ford hasn’t yet admitted to the existence of the facelifted Focus – although the company has said it has no plans to introduce a plug-in hybrid version of the hatchback. This is despite the fact that the Focus shares its platform with the Kuga PHEV and could easily borrow parts to make a fresh rival for the popular Volkswagen GTE.

Without a replacement for the Focus RS, this Ford Focus ST is the hottest hatch in the Blue Oval's next-generation lineup.
Read more

A farewell to the Ford Focus RS

The last Focus RS was perhaps a high-water mark for fast Fords. As Ford pulls the plug on the RS hot hatch, our columnist pays...
Read more

Ford has confirmed that plans for a new Focus RS have been scrapped, meaning that the fourth-generation Focus will top out at the 206kW...
Read more