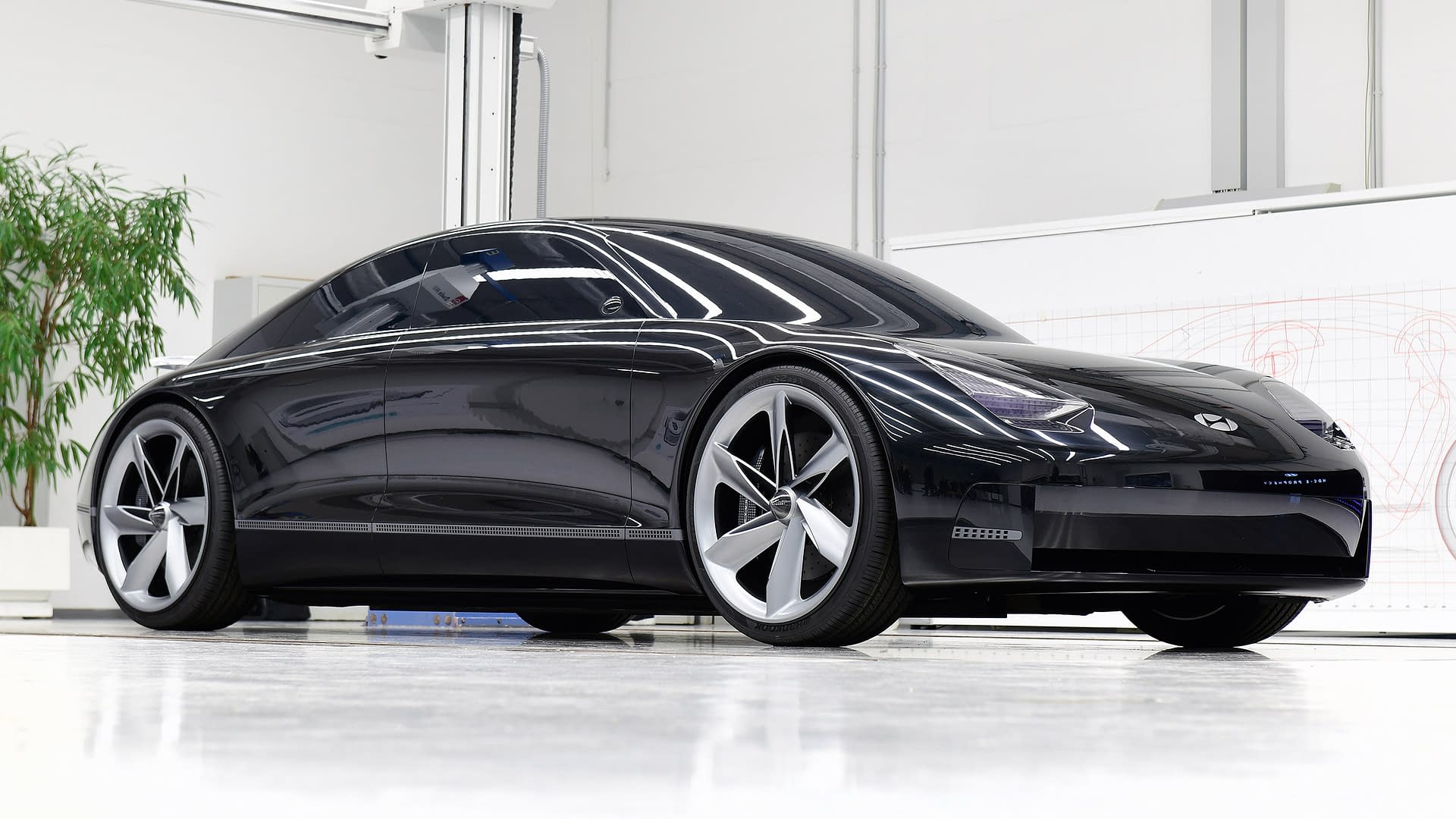 This is the Hyundai Prophecy. It’s a new, all-electric concept car which showcases a potential range-topping sedan for Hyundai which, if realised, would give the brand a rival for the Tesla Model 3 and the forthcoming BMW i4. The concept also previews the design direction for the company’s future electric models.

The Prophecy follows Hyundai’s “Sensuous Sportiness” design language, which was first shown on the latest i20 supermini – although the concept adopts a more minimalistic look than we’ve seen on the company’s previous models. It also draws inspiration from the Phantom Corsair streamliner of 1938, sharing the same aerodynamic teardrop profile.

To maintain aerodynamic efficiency, Hyundai has fitted fixed door glass to the concept. The firm says an open window causes an excessive amount of drag, which would negatively impact the Prophecy’s range. To get around the issue of ventilation, the company’s engineers have developed an air filtration system which automatically draws fresh air from the vents at the front of the vehicle, feeding it into the cabin when it recognises the interior air is stale.

Wildly flared wheel arches swell from either side of the vehicle. The clean front end is punctuated by little more than a Hyundai logo and lighting units made up of tiny, pixelated elements. The same design continues at the rear of the car, where the lights are grouped into two towers. Hyundai has confirmed that the pixelated design will become a feature of its upcoming electric production models.

The high-level third brake light features a similar design. It’s integrated into the rear lip spoiler and, when viewed from the top down, it bears a resemblance to a graphic equaliser on an old hi-fi system.

Inside the Prophecy there’s no steering wheel; instead, the driver uses a pair of tiller-like joysticks – one is mounted against the door, while the other is fitted to the centre armrest. The minimalist design extends to the dashboard, which is little more than a shelf holding a full-width bank of digital displays.

When the vehicle is parked, the entire unit can swivel upwards, turning the Prophecy’s cabin into an “entertainment space.” Dubbed “Relax Mode” by Hyundai’s marketeers, the setting also reclines the front seats which the company says provides the optimal position to watch content on the dashboard’s screen.

Hyundai has released few technical details for the Prophecy, but it’s based on the same scaleable electric underpinnings as the Hyundai 45 Concept, which was launched at the 2019 Frankfurt Motor Show. Should the model become a production reality, it’ll likely have a range in excess of 500km.

Executive Vice President and Chief Design Officer for the Hyundai Motor Group, Luc Donckerwolke, said: “We were aiming for a higher sense of emotionality in our product. We realised we had been designing electric cars in the same way as conventional cars.”

Do you think the Hyundai Prophecy will make it to production? Let us know in the comments section below…